EFF violence up – but popularity ratings way down 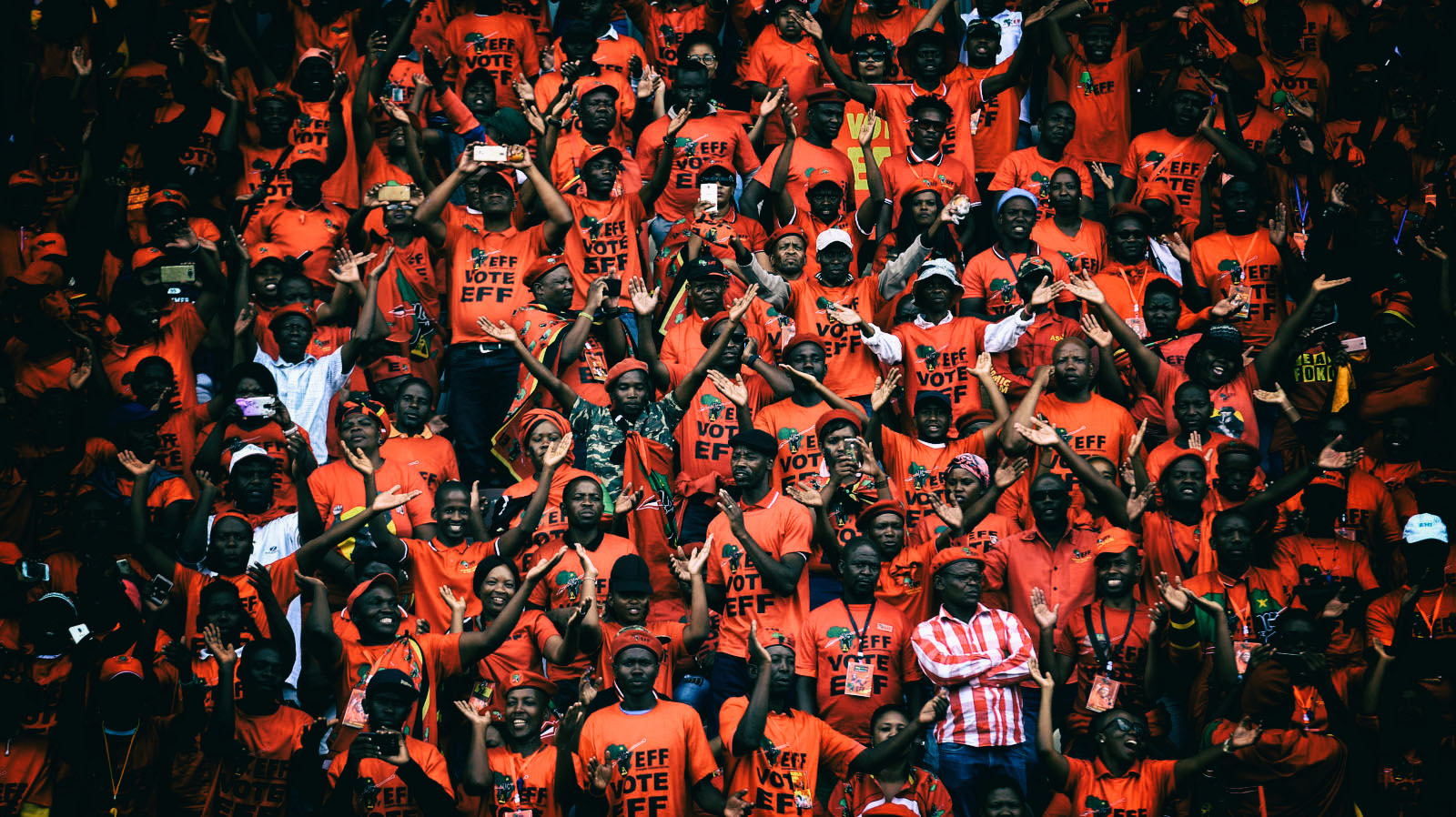 Research by Daily Maverick shows that there has been a steady increase in the EFF’s rhetoric of violence since it started tracking the party's behaviour in March 2018 and after the attack on News24 photographer Adrian de Kock.

More than a month after EFF MPs stormed Minister of Public Enterprises Pravin Gordhan as he gave his Budget Vote speech in Parliament, no action has been taken against them.

Instead a dragnet has been thrown over parliamentary reports into the incident on 11 July 2019 which National Assembly speaker Thandi Modise called unacceptable conduct in clear contradiction of parliamentary rules.

In addition, there has been little public debate about EFF president Julius Malema’s statement that the party would “go to the bush” if judgments were not neutral. His verbal attack, on Women’s Day, came as Public Protector Busisiwe Mkhwebane lost successive court cases in judgments by women judges and for which she now faces two personal cost orders.

On Friday, 23 August, News24 revealed that the EFF would approach the Constitutional Court directly to intervene in the number of interdicts granted to stop Mkhwebane’s remedial actions being implemented in relation to findings against President Cyril Ramaphosa and Public Enterprises Minister Pravin Gordhan.

Malema is a member of the Judicial Service Commission. As a commissioner he has a duty to protect the independence of the judiciary. A JSC spokesperson said no mechanism exists to protect judges from attacks in the public domain or to sanction its members who may engage in such action.

The two incidents reveal the ramping up of the EFF’s campaign of violence which Daily Maverick has tracked since March 2018 when EFF deputy president Floyd Shivambu beat up Netwerk24 photojournalist Adrian de Kock in the parliamentary precinct. De Kock laid charges and he said there may finally be some movement on his criminal complaint in September, 18 months after the attack.

Parliamentary spokesperson Moloto Mothapo said two reports into the EFF MP’s who stormed the podium as Gordhan spoke and who were subsequently ejected from the national assembly, were not public. Mothapo said Modise had referred a report, by house chairperson Mmatlala Grace Boroto, to a sub-committee on the “Physical Removal of Members from Chamber” within the 10 days stipulated by the rules. That sub-committee had also tabled a report which had not yet been made public and it would make headway on the report as MP’s returned from recess.

JSC spokesperson CP Fourie said no complaint against Malema’s threat to return to the bush if judgments did not go the way the EFF approved of had been received. “The Judicial Services Commission Act does not deal with complaints against commissioners. It may be raised at the November sitting, but I can’t say,” he said.

Research by the Daily Maverick shows there has been a steady increase in the EFF’s rhetoric of violence since it started tracking after the attack on De Kock. Since then, the pace of rhetorical attacks on the media grew, especially on journalists who investigate the EFF’s extra-parliamentary business endeavours.

In August, the SA National Editors Forum sought to prevent hate speech by the EFF against journalists in a case before the Equality Court. In another case, journalists Anton Harber and Thandeka Gqubule are going to court to challenge the EFF’s allegation that they were part of Stratcom, the apartheid-era media dirty tricks propaganda campaign funded by the security branch.

Since the EFF labelled Gqubule and Harber as alleged Stratcom operatives, their trolling armies call all journalists they disagree with “stratcom” agents. The term has now become a social media meme. In December 2018, News24 editor-in-chief Adriaan Basson laid charges against an EFF member who made racist threats against him on Twitter.

So far, political analyst and broadcaster Karima Brown is the only journalist who has succeeded in getting the EFF to stand down in its rhetorical warfare against journalists it disagrees with when the court ruled that party leader Malema had violated the electoral code by making public her contact details.

In November 2018, Gordhan also laid crimen injuria charges against the EFF after the party’s leaders (Malema, Shivambu and spokesperson Mbuyiseni Ndlozi) all attacked him and his family when he gave evidence at the Zondo commission of inquiry into State Capture.

In addition, the party’s members attacked Vodacom stores in December 2018 after an alleged instruction by a party leader on Twitter (after the party was angered by a speaker at a Vodacom Journalist of the Year Awards) and also ransacked H&M stores after the retailer carried a sweater that depicted a black child as a monkey on it.

The Vodacom case is an important one because it provided the first evidence of how a social media attack could morph into real-world violence. However, the telco’s top executives including CEO Shameel Joosub met the EFF leadership after the ransacking of stores and did not press charges on behalf of their franchisees.

In March 2019, an omnibus finding (several complaints were dealt with in a single finding) into numerous verbal racial attacks by Malema and other leaders of the EFF was declared to not be hate speech by the Human Rights Commission.

In the findings, the HRC found that black people had more leverage with regard to public rhetoric because of the history of apartheid’s oppression and dispossession, but it said political leaders of all stripes should protect social cohesion in South Africa.

Is violence costing the EFF its reputation?

In the latest SA Citizen Survey report which measures the standing of political leaders, Julius Malema is down from 29% to 25%, while President Cyril Ramaphosa’s ranking is steady at 62%. The quarterly survey of 3,900 South Africans is representative with a 1.5% margin of error. 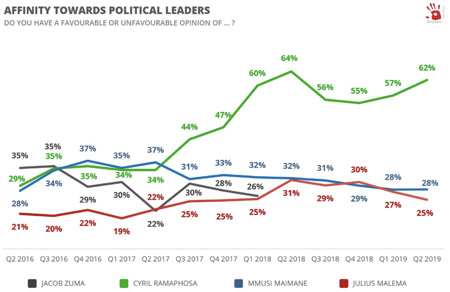 “For nearly two-years, from Q1 2017, Malema’s favourability was on a continual upward incline rising from 19% in Q1 2017 all the way to 30% in Q4 2018. When comparing his favourability rating of six months ago (Q4 2018) where it was 30% to where it is now (25%), this represents the steepest decline of any major political leader, reversing the upward trend (the visual above indicates this),” says Reza Omar the strategic research director of Citizen Surveys.

The survey reveals that trust in political parties is low. DM