EFF supporters gathered at the Orlando Stadium for the Tshela Thupa Rally ahead of the general elections on 08 May 2019. Photo: Felix Dlangamandla/Netwerk24

EFF supporters gathered at the Orlando Stadium for the Tshela Thupa Rally ahead of the general elections on 08 May 2019. Photo: Felix Dlangamandla/Netwerk24

Money robbed from VBS Mutual Bank funded the EFF’s fourth birthday bash held at a popular party venue in Umlazi, Durban, in July 2017. This forms part of a chunk of the illegal R16.1m Brian Shivambu’s company Sgameka Projects received from VBS that was ultimately channelled to the EFF. So far, Scorpio has isolated about R4.13m in VBS loot paid towards the EFF — SA’s second-biggest opposition party.

In a scheme designed to mask the origin and ultimate beneficiaries of the funds, VBS money flowed through companies over which Julius Malema and Floyd Shivambu have ultimate control.

“No VBS-money has flowed into our coffers”, EFF president Julius Malema pledged on 18 April 2019, during an interview with Eusebius McKaiser on 702 Talk Radio. Malema’s denial came three weeks before South Africa’s most contested democratic election yet. Start from 38th minute:

It was a crude lie.

In fact, VBS money funded the EFF’s fourth birthday bash, paid for printing of T-shirts, transport and what was described as “Jhb Office Rental”. The source of these VBS funds was obscured when two proxy companies for Malema and Shivambu were used to effect the payments.

All in all, the EFF benefited from at least R4.13-million through myriad channels. Of this total amount, Scorpio traced about R1.5-million in VBS loot which was paid directly into two EFF bank accounts. This comes despite vehement denials from the EFF leadership of having benefited from the VBS robbery. Another R454,000 was deposited directly into the bank account of popular party venue Eyadini Lounge in Umlazi (KwaZulu-Natal), paying for the EFF’s fourth birthday party in July 2017.

To understand the crime, including crude attempts to obscure the source of funds, one must start at the beginning.

VBS Mutual Bank was robbed into insolvency, advocate Terry Motau and law firm Werksmans announced in October 2018. Their five-month investigation, sanctioned by the Reserve Bank, was triggered by an ostensible “liquidity crisis”. In a report titled The Great Bank Heist, Motau and Werksmans found the bank was robbed by its owners, managers, auditors and the politically connected.

VBS’s depositors were, at first, the poor and vulnerable, via stokvels and burial societies. Later, in contravention of the municipal finance management act, municipalities also invested money in the bank. Apart from taxpayers’ funds lost in the robbery, poor individual depositors lost hundreds of thousands of rand — the entire life savings of some. Motau and Werksmans found the bank was robbed by 53 people who, in a concerted effort, stole about R1.8-billion.

Brian Shivambu, the brother of Floyd, was listed as among the “biggest recipients” of VBS loot. A company he purportedly owns, named Sgameka Projects, received R16.1-million in stolen VBS funds, Motau and Werksmans found. An analysis of Sgameka’s bank account shows the main beneficiaries were the EFF, Grand Azania (a company which is an alter ego of Floyd), and Mahuna Investments (an alter ego of the EFF Commander-in-Chief, Julius Malema).

In today’s analysis, we will only focus on money flowing to the EFF. 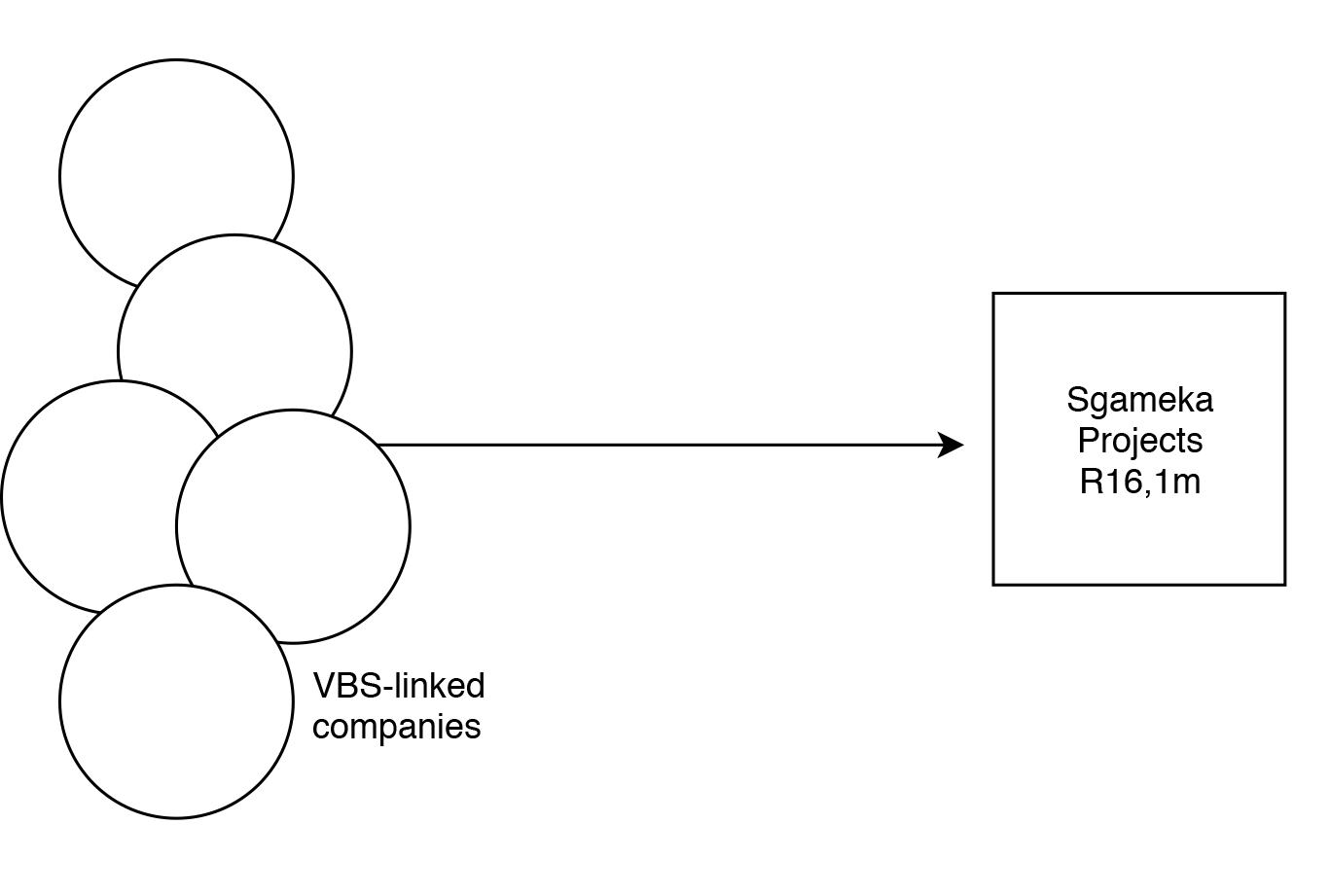 Malema invited journalists to scrutinise the EFF’s financials during the same April interview with McKaiser on Radio 702. Scorpio took him up on the offer. Our request was deferred to after the 8 May elections. Scorpio’s follow-up request to view the EFF financials after elections was ignored.

So Scorpio sent our findings and a list of questions to the EFF leadership, including the EFF’s treasurer-general Leigh-Ann Mathys.

“I won’t be answering any questions from this moloi; she can write anything she wants to write. I’ve responded to all her questions before and won’t be doing it going forward. She extraordinarily personal (sic) and I’m not answerable to white madam. She can go to the nearest hell.”

In a follow-up question, Scorpio asked whether this view by the party’s president is sanctioned by the party itself. Again, the EFF leadership did not reply. Malema, however, did reply:

Over the past four years, Malema and the EFF have built their election campaign on a strong anti-corruption stance while proffering the EFF as the only corruption-free choice.

During the party’s final rally at Orlando Stadium, Soweto, in May 2019, Malema told EFF supporters that the police should go to Luthuli House to “shoot Ace Magashule, the real criminal” and that “parliament is full of thugs and criminals, go and shoot them randomly…”. (Start listening at 0:30)

During the loud days of former President Jacob Zuma, in September 2016, Malema obstructed his speech in parliament, saying “we can only allow honourable people to speak, not criminals of note who … continue to collapse the country because of their personal interest…we cannot allow the president to speak in this house.”

Sgameka operated as a slush fund. In October 2018 Brian claimed the company was a consulting firm specialising in the mining and insurance industry and that he had a contract with Vele. (Through another illegal scheme, Vele became the majority shareholder in VBS. It was headed by the robber-in-chief, Tshifiwa Matodzi.)

Brian’s explanation is, of course, a lie. Sgameka received no income other than illegal VBS funds — making proceeds of crime the company’s only source of income.

Investigators could find no trace of a contract between Vele and Sgameka. The money was channelled from VBS towards Sgameka via various VBS- and Vele-linked companies. Brian Shivambu could not produce any invoices, work- and time-sheets or explain how much he paid his employees or the tax man. From Sgameka Projects’ bank statements, it’s clear that Brian paid no VAT or other taxes and paid no employees nor rent for office buildings.

In short — Sgameka did not operate as a legitimate business. Not even close. Instead, Sgameka sent:

From Sgameka’s financials, it is clear that Brian utilised a precious little of the VBS money for personal use. His managing of the account and the amounts moved to companies Floyd and Malema ultimately control, reveals Brian was but a proxy and not the intended receiver of the VBS loot. (Mail & Guardian and amaBhungane have independently linked Floyd and Malema to the same companies.)

The research, based on irrefutable evidence, shows that the VBS money was used to prop up the EFF as well as the lifestyle of Julius Malema and Floyd Shivambu. Scorpio cannot be more specific about this type of evidence without compromising our sources.

These facts will, however, stand up to scrutiny in court.

Scorpio does not yet have insight into how Grand Azania spent its share of the VBS loot.

Using VBS money, Sgameka Projects and Mahuna Investments paid R454,000 in four tranches to Eyadini Lounge between 25 July and 1 August 2017. According to several irrefutable sources, the allocated money was described as “EFF Eyadini”, and “EFF 4”. It paid for the party’s exclusive fourth birthday party at the popular Umlazi venue held over the last weekend of July 2017.

During that week in 2017 EFF leaders toured KwaZulu-Natal — a province where the party has done rather well in the 8 May 2019 national elections. Back then, on 28 July 2017, Malema made a fiery speech in Durban. He stood in front of thousands of EFF supporters, saying the party has grown beyond expectations and promised that the EFF will continue to fight for the poor, for students, for land and for jobs.

By then, several hundred thousand VBS rand had been spent to prop up the EFF.

The EFF further received R1.5-million in VBS money directly into two bank accounts held by the party. A day before Malema’s jubilant speech, on 28 July 2017, Sgameka paid R400,000 into a bank account held by the EFF. Another R200,000 to the same account followed on 31 July, Sgameka’s bank statements show. Descriptions on these payments state “RTC-EFF” and “RTC-EFF Donation”.

(Real Time Clearance (RTC) is a banking product allowing the receiver immediate access to the money paid into its account. – Ed) 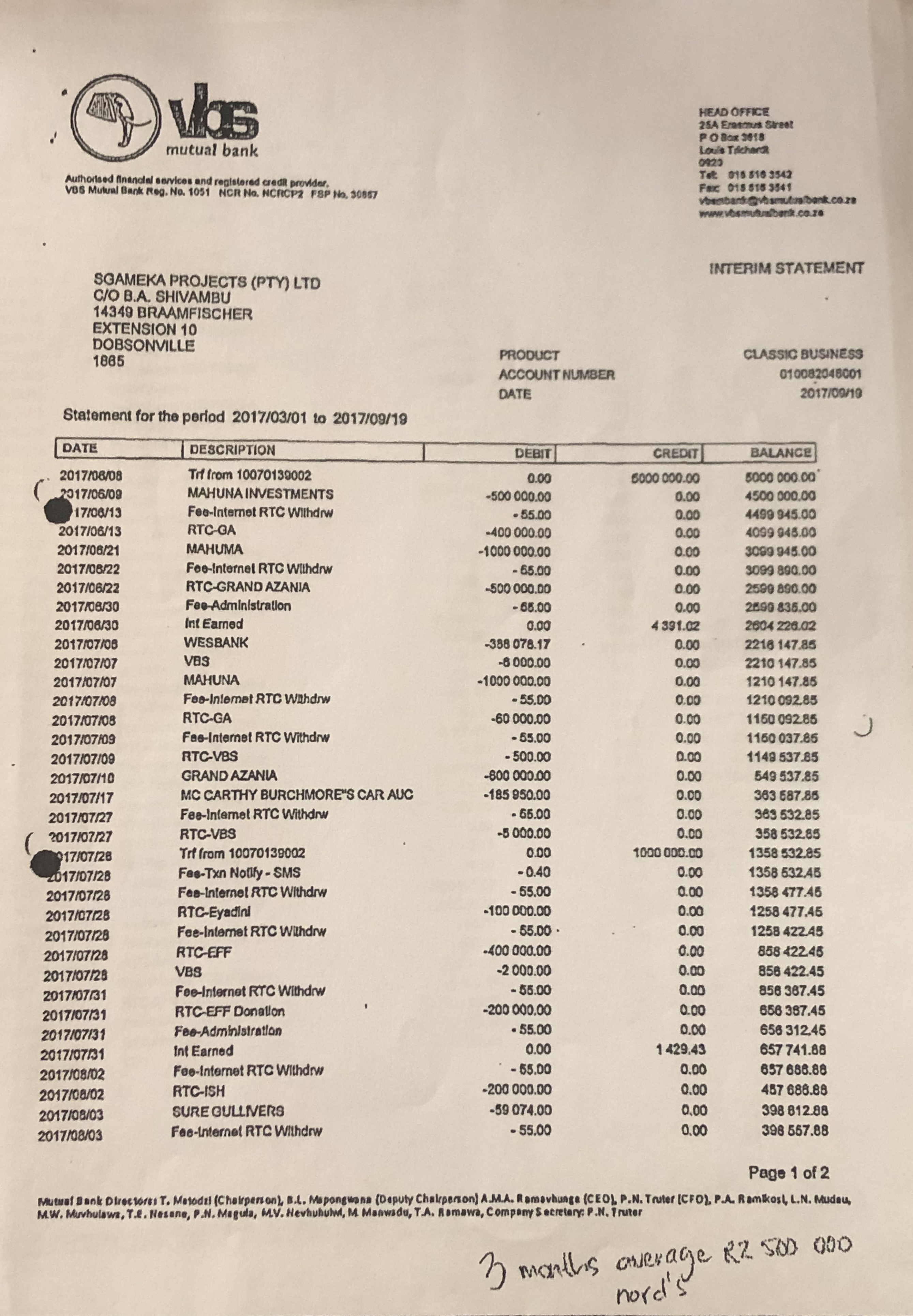 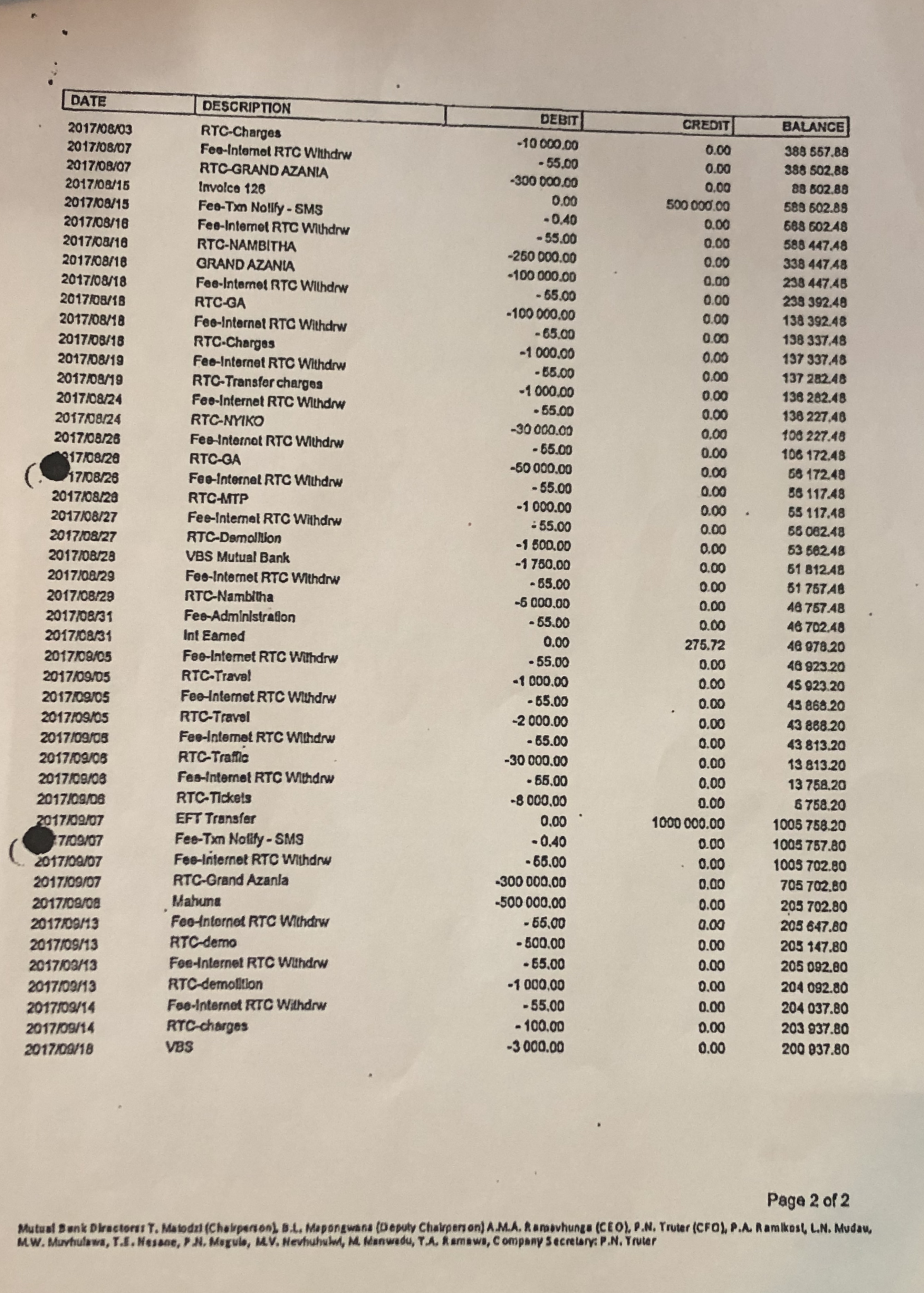 By December 2017, Mahuna and Sgameka paid a total of R1.5-million in six tranches directly into two bank accounts held by the EFF. Scorpio independently verified that the accounts belong to the EFF.

Scorpio’s findings are bolstered by a forensic accountant’s report written by Crowe Forensics and attached to Motau and Werksmans’ The Great Bank Heist report as Appendix A. Crowe’s mandate included an analysis of money-flows from VBS to persons and companies “that were identified as being of interest to the investigation”. The EFF received R1.3-million in VBS-money from Sgameka, Crowe found.

The probe was akin to fox investigating who stole chicken’s eggs. 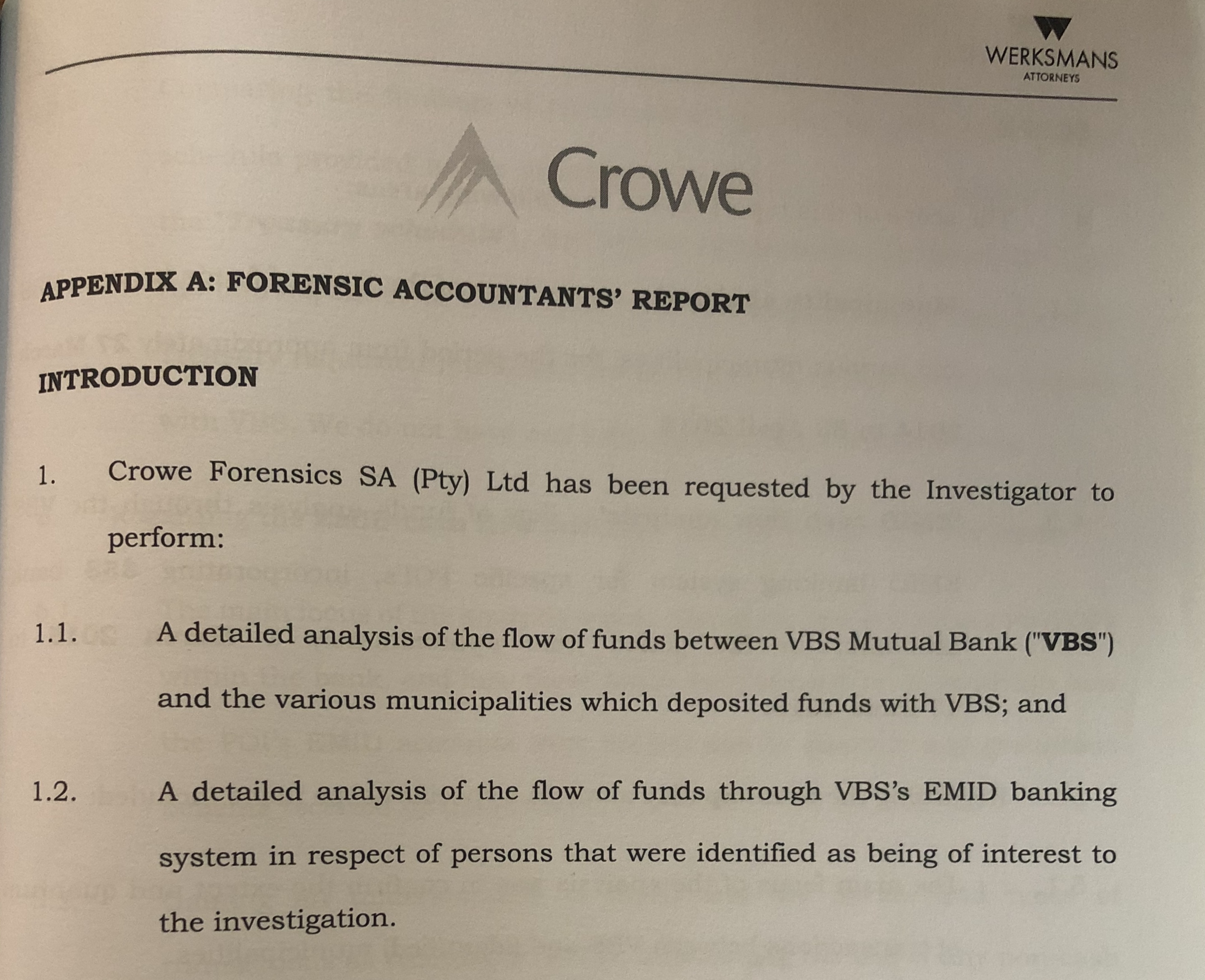 In eight payments to different accounts, Mahuna spent another R200,000 on the EFF’s birthday in 2017. The bulk of these payments were effected on 28 July and are, according to several sources, described as “July 26 Movement” or “July 26” — a reference to the EFF’s birth date.

That brings us to about R2.15-million in VBS money propping up the EFF — stolen from the very constituency the party claims to protect.

Between 30 August 2018 and 7 September 2018, small sums were also earmarked for transport and what seems to be regional EFF branches. These funds were paid to eight different bank accounts. The descriptions on these payments include “Lephalale EFF”, “Thabazimbi EFF”, “Makhado EFF”, “bus hire” and “transport”. Scorpio verified that the money was paid to at least two transport companies.

Last week a jubilant Malema stated during a press conference that the EFF is “doing well… VBS or not VBS, we are cruising nicely…”

The house at Edward Rubenstein

Mahuna also effected four payments totalling about R460,000 towards a house in uptown Johannesburg which was rented by Malema and is now registered as an asset on the books of the EFF. These payments, effected between July 2017 and February 2018, are linked to upgrades to a pool and the property.

Malema rented the property at 49a Edward Rubenstein, Sandown, Johannesburg, at least since 2012. According to the neighbours, Malema lived on the property in 2018. The deed documents Scorpio has seen shows that around June 2017, the property was transferred to the name of the “Economic Freedom Fighters”. The purchase price was R5.25-million. The origin of the balance of the funds paid towards the house so far is unknown at this stage.

Malema declined to answer any questions about the house, saying “the EFF will answer that one”.

On the point of tenders

The scheme of injecting a middleman in an attempt to obscure the true beneficiary of the stolen money is typical of the 2011/2012 On Point scheme in which Malema was deeply involved. In the same radio interview with Eusebius McKaiser in April 2019, Malema claimed that then-Public Protector Thuli Madonsela made no adverse finding against him. That is not true. Madonsela actually did find that On Point, embroiled in corrupt and fraudulent tender deals, paid R2-million to Malema’s Ratanang Family Trust and another R1-million to “Ratanang Farm”, Schuilkraal.

The Ratanang trust, Madonsela said, was “probably used as vehicles for the transfer of funds obtained through an unlawful process”. In related investigations, SARS claimed that Malema used the Ratanang Family Trust to fund his lifestyle.

Based on the clear evidence, the On Point scandal sounds an awful lot like VBS light. DM

Steve Kretzmann for GroundUp • 4 hours ago