The Great VBS Heist: How the Shivambu brothers benefited even more

The Great VBS Heist: How the Shivambu brothers benefited even more

A company inextricably linked to the Brothers Shivambu benefited from a questionable R4-million VBS Mutual Bank business loan. Before the bank was put under curatorship, VBS managed to advance about R2.1-million towards the intended business – a wine bar and restaurant in Vilakazi Street, Soweto, provisionally named ‘Grand Azania’.

Because frontman Brian Shivambu did not qualify for the R4-million VBS Mutual Bank business loan, he ceded, with the help of VBS bank managers, an “investment account” containing an allegedly fictitious R4-million to the bank against which he could borrow. If intent to fleece the bank is proven, this will amount to fraud.

The loan was further never serviced. These schemes make the Shivambu loan a quintessential example of how “business” at VBS Mutual Bank was conducted, and why the bank imploded.

This R4-million loan, granted to the slush fund Sgameka Projects, was not detailed in the Motau/Werksmans-report investigating the bank robbery. An analysis of loan documents, emails and bank statements seized from the bank, as well as information from impeccable sources, form the basis of this Scorpio investigation.

The Shivambu brothers deny any wrongdoing.

Getting Stellenbosch on board

In around 2017, deputy president of the EFF Floyd Shivambu approached several businessmen – including individuals whom he often scornfully referred to in public as “the Stellenbosch Mafia” – regarding personal business ventures he had his eyes set on.

EFF MP Marshall Dlamini accompanied Floyd Shivambu to some of these repeated meetings with some of South Africa’s highest net-worth businessmen, confirmed four businessmen with personal knowledge of discussions with Shivambu. (Dlamini assaulted a police officer outside Parliament in March.)

One of these ventures pitched by Floyd Shivambu was a wine bar and restaurant to be built in the historical Vilakazi street in Orlando West, Soweto. It was to be called “Grand Azania”, and Shivambu was shopping around for a sponsor and a wine farmer who’d allow him to bottle their wine “under his own brand, Grand Azania”, sources recalled of the discussions.

Grand Azania is also the name of a company which received R6.16-million in illegal VBS money and of which Shivambu’s younger brother, Brian, is the sole director and bank account signatory (more about this later).

That Floyd Shivambu privately associated himself back then with “Grand Azania”, and described it as “his own brand”, is important: When questioned by Scorpio after VBS imploded, the deputy president of the EFF tried his best to disassociate himself from the brand and the company. Brian also denied that his brother had – at the very least – close ties with Grand Azania. (Read more proof about Floyd Shivambu’s links to Grand Azania later in this article.)

On 22 December 2017, Brian, the frontman for illegal VBS money flowing towards his brother, Julius Malema and the EFF, signed a really good deal with VBS Mutual Bank.

It translated into monthly instalments of about R190,000, the loan contract states. It is an unsustainable ask of any small to medium startup in its first two years, especially because most startups only enter a positive cash flow only after at least three years, an industry specialist confirmed.

VBS bank’s system, as well as Sgameka’s bank statements, indicate however that Brian never serviced the loan. Scorpio confirmed this from sources and bank statements.

Brian conceded to this fact when questioned by Scorpio. He did however not mention that Grand Azania received any money from VBS. Said Brian:

(At this point, dear reader, you have every reason to be confused by this reply from Brian. The loan amount of R4-million was not applied for by Grand Azania, as he states in his reply, but was rather applied for by Sgameka Projects. Sgameka Projects sent formal letters to VBS asking for the funds to be advanced directly to Grand Azania and Architects Studio Plus. VBS would then advance the requested sums and pay it directly into the bank accounts of Grand Azania and Architects Studio Plus. Brian’s confusion may relate to how hard it is to focus on the facts when there are so many fictitious stories to juggle.)

In the true spirit of how “business” was being conducted at VBS, as found by adv. Terry Motau and Werksmans, there were also no repercussions towards this delinquent client as meted out to other law-abiding citizens. This despite a clause in the loan agreement (signed by Brian and Nthlokwe) stating that the bank may “claim damages” or “claim specific performance” after a material breach and failure to remedy the breach in five working days.

Further to the above are the circumstances under which VBS allowed Brian to borrow the R4-million, also highly questionable.

Brian and Sgameka did not qualify for the R4-million loan, documents Scorpio has seen suggest. By September 2017, Sgameka had already borrowed R1.46-million for a house the Shivambus’ parents lived in after Floyd used his influence with VBS CEO and robber-in-chief, Tshifiwa Matodzi.

To circumvent this problem, Brian (on behalf of Sgameka) ceded an investment account professedly containing R4-million to VBS bank in order to borrow against it.

Except, sources could find no trace of the R4-million.

“If the Sgameka investment account exists but the investment money was never in place or planned to be deposited there, one would reasonably infer the investment security being offered to be fraudulent. Likewise, if the money was never expected by VBS to be deposited, it would likely constitute fraud by VBS. In either case, the intent to defraud must be properly proven. Should the evidence reflect an intent to use a fictitious investment account with no funds as collateral, VBS, Sgameka and Brian may be liable to criminal prosecution for various crimes.”

The paperwork, however, keeps up appearances. Brian has signed a: 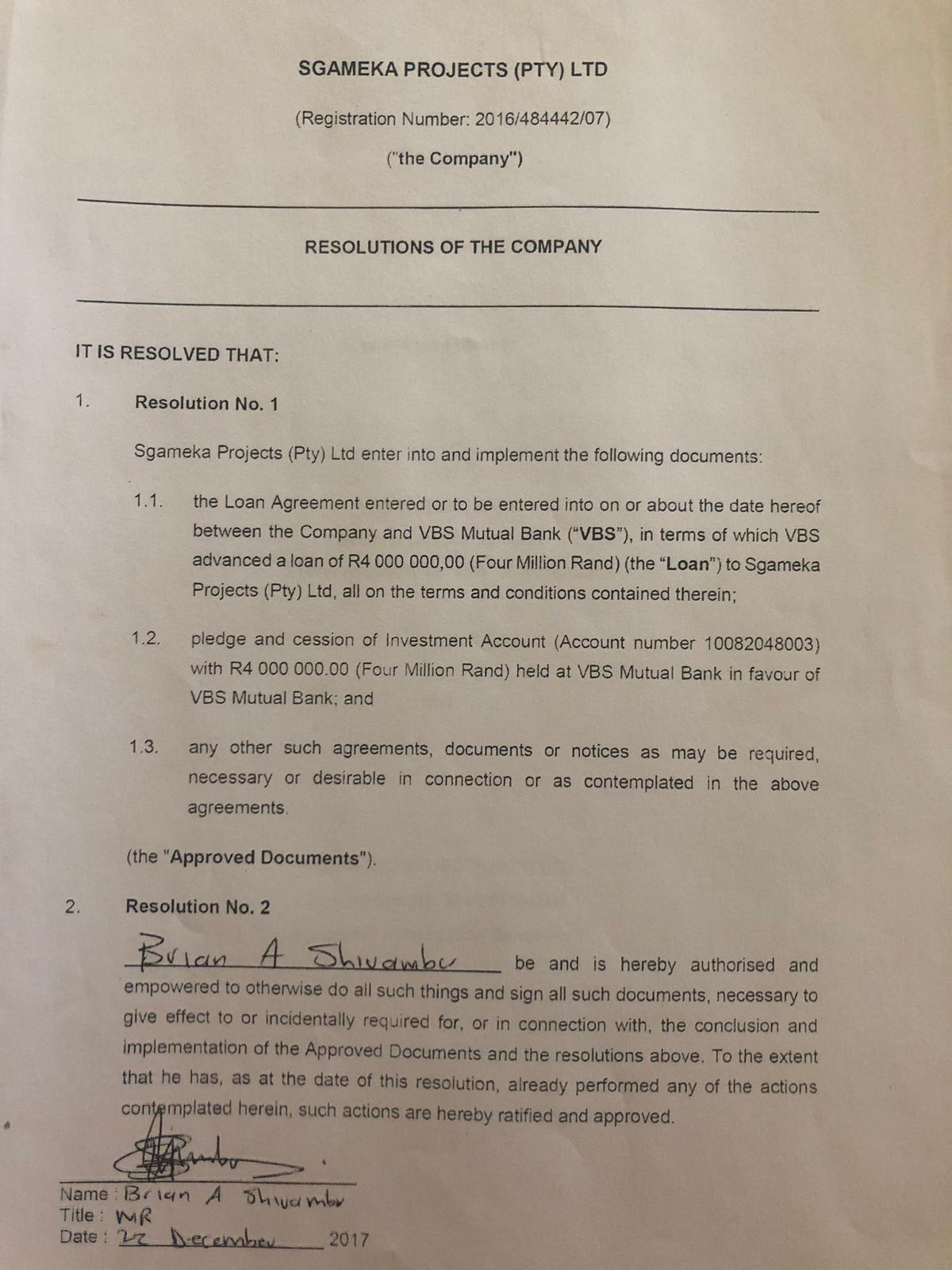 Brian ignored questions about the R4-million investment account, save to say that he has “given you my version of the facts and you can proceed and write your fictions”. 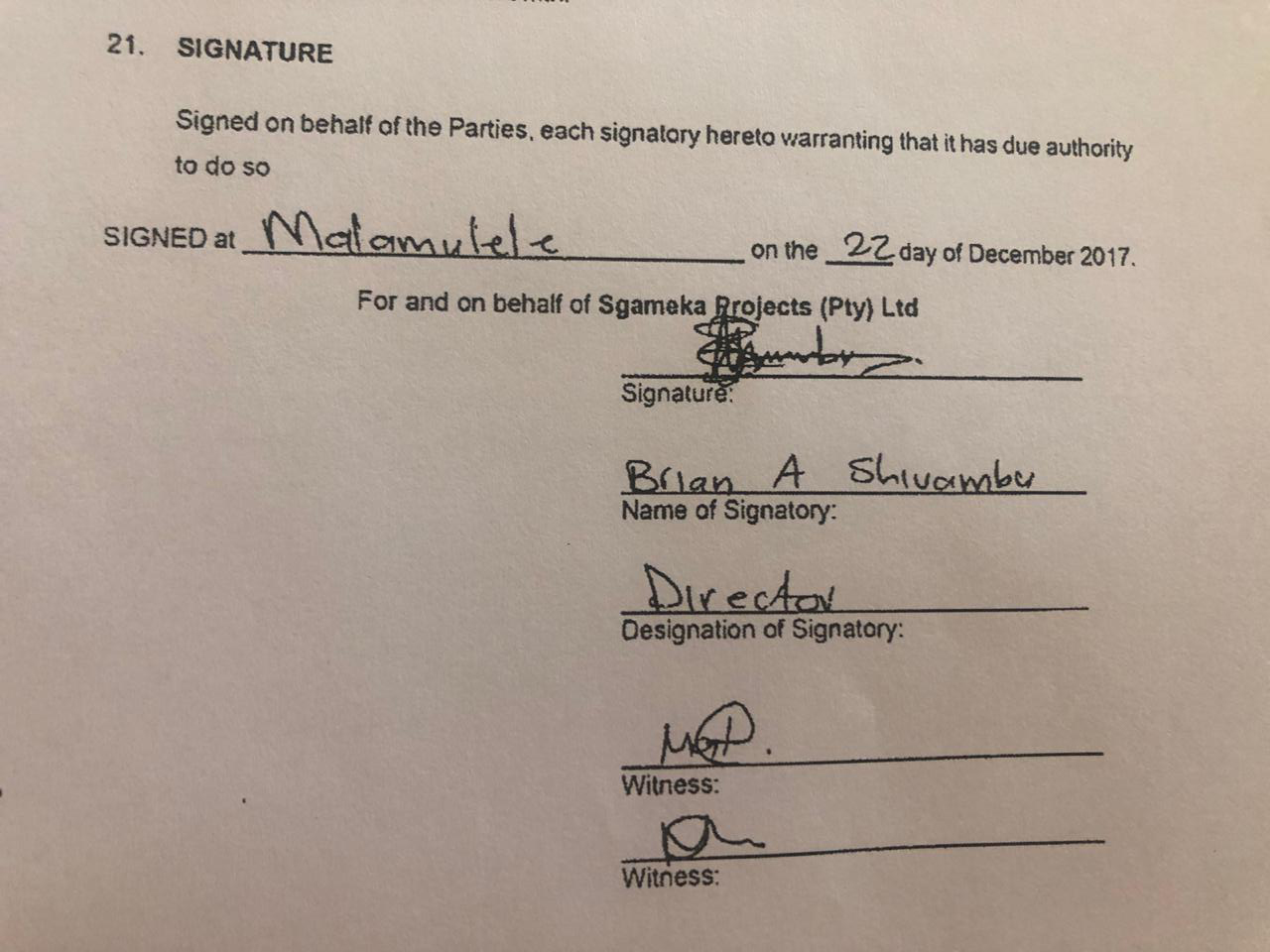 Apart from what the verifiable facts suggest, it is difficult to say who hatched the scheme. It is, however, safe to say that Nthlokwe and other bank managers ought to have known that a) neither Brian nor Sgameka serviced the R4-million loan and that b) the investment account was in fact just a shell without the R4-million cash in it, an industry specialist confirmed.

When questioned, Nthlokwe replied via WhatsApp, saying: “No comments (sic)” and, “I’m bound by the bank-client confidentiality”.

“This is absolute rubissh (sic) and you continue to humiliate yourself,” Floyd said last week when Scorpio asked him to comment on eight findings contained in our investigation.

“I thought you are now emailing me proof of the R10-million you said I received from VBS. You can continue to drown in confusion because your masters and handlers are misleading you. I have never been involved in any fraud and I don’t own any business.”

When we asked if he could highlight the exact parts he rubbished, Floyd continued:

“I don’t want to. All of it is your imaginary rubissh (sic)…”

Scorpio’s questions also referred to Floyd’s links to Grand Azania, and that the company may be his alter ego, managed by Brian.

Scorpio based these questions on three facts:

Brian was asked to comment on the same findings. He said:

“Your desperation in trying to link my brother is laughable. You can go ahead with your fishing expedition and there is absolutely no corruption in asking for a loan from a bank.”

Grand Azania – the business and the company

Before the bank was put under curatorship in March 2018, VBS managed to advance R2.1-million towards the wine bar, a VBS statement invoice shows:

Scorpio verified that these payments were effected by interviewing the head of Architects Studio Plus as well as conducting an analysis of VBS bank statements.

(In October 2018 Brian claimed that he had never received any money from VBS bank and only did consulting work for Vele, the majority shareholder of VBS. Scorpio’s findings prove these claims to be a crude lie. The R1-million paid into his purported company Grand Azania emanates directly from VBS bank’s account, bank statements show. Sgameka’s bank statements further confirm that it received payment from various VBS and Vele affiliates.)

By February 2018, it was clear for everyone in the know that VBS had serious financial problems, that National Treasury worried about some concerning contraventions of the Municipal Finance Management Act and that the Reserve Bank was contemplating drastic measures.

On 2 February, Sgameka requested VBS managers to pay out the balance of the R4-million loan to the company, documents signed by Brian show. VBS bank managers never got that far. By 11 March 2018 the Reserve Bank put VBS under curatorship, stopping all money flows from the bank.

Service providers contracted by the Shivambus said they were tasked to design and equip a space in Vilakazi street fit to be a wine bar and restaurant. Invoices Scorpio had seen and interviews held with the service providers confirmed that the business was to be named “Grand Azania”. The service providers noted that money owed to them wasn’t paid after VBS bank was put under curatorship, causing the project to be delayed.

“Thanks to new investors, we are now again moving forward on the project,” one service provider claimed. (They would not reveal who the new investors were.)

The wine bar business was named after previously-mentioned Brian’s company Grand Azania. Brian is the sole director and signatory to accounts, sources, as well as CIPC-documents, accessed on 1 April confirmed. The company’s inception date is registered as 18 October 2016. Since Scorpio and Mail & Guardian pointed out Grand Azania as a second tier receiver of illegal VBS funds, the company has been allowed to fall into a “deregistration process” at the CIPC office. Apart from the R1-million VBS paid to Grand Azania as an advance to the R4-million loan, the company also received R5.16-million in illegal VBS funds from Sgameka.

Adv. Terry Motau and law firm Werksmans were appointed by the Reserve Bank’s Prudential Authority to investigate the curator’s concerns over VBS Mutual Bank in April 2018.

Their report The Great Bank Heist found that Brian was one of 53 businessmen who received gratuitous payments from VBS.

Motau and Werksmans further found that the bank was robbed into insolvency to benefit the pockets and political aspirations of a select few. Their investigation report consists of several volumes. Only the first has been made available to the public.

In this public version, Motau and Werksmans described several times how very large loans had been made to clients of VBS, often without the requisite approvals being in place, that fictitious contracts were used to create a premeditated impression, and that punitive steps were very rarely taken (if at all) against delinquent clients.

The creation of fictitious deposits – where a book entry would be made without the physical cash actually being available – was also an everyday occurrence, Motau and Werksmans found.