The Shivambu Brothers and the Great VBS Heist 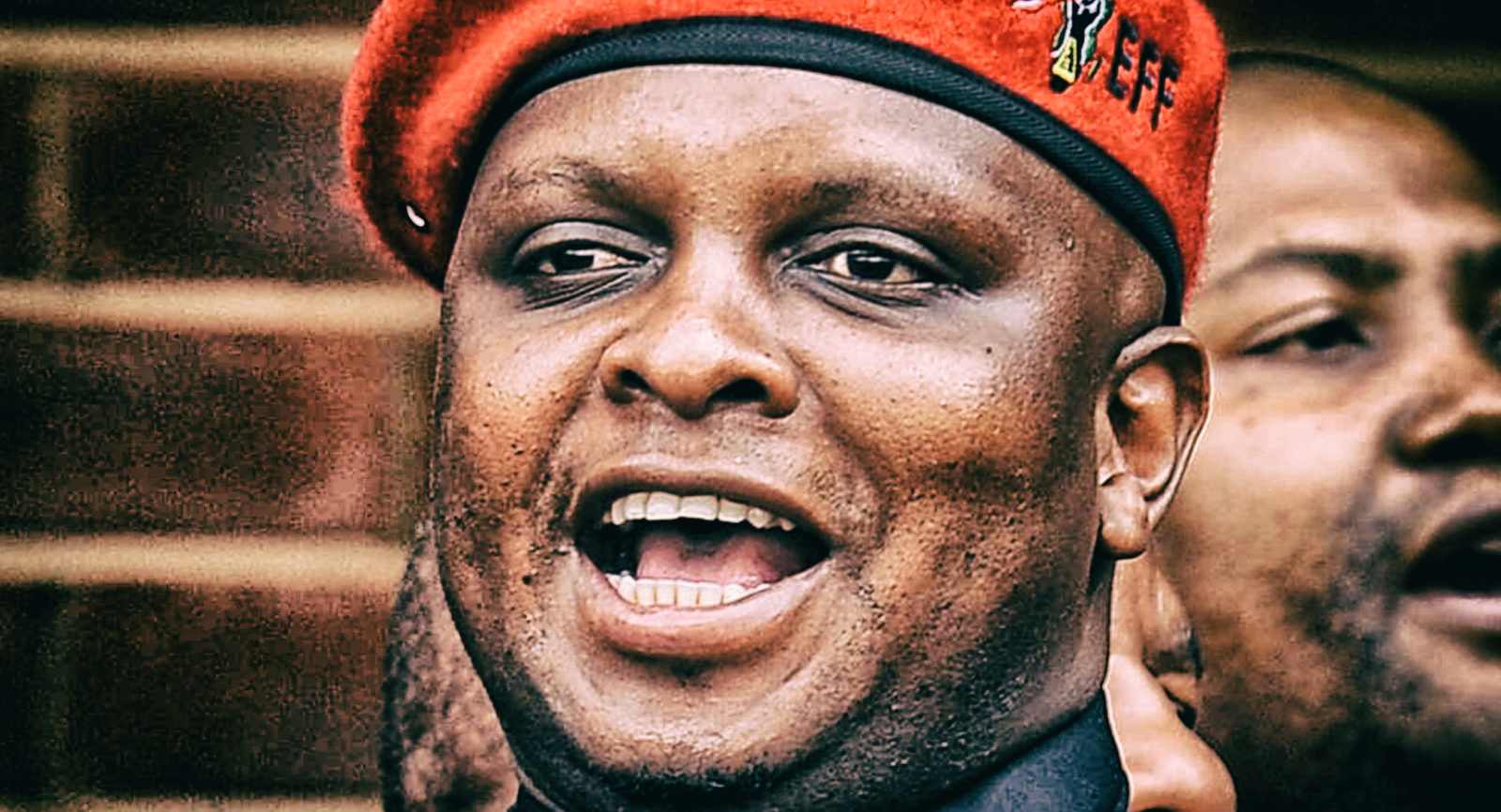 The EFF and its Deputy President Floyd Shivambu have benefited financially from the VBS Mutual Bank scandal, sources claim. Shivambu, who is said to have received about 10 million VBS-rand through his younger brother Brian, has for months tried to suppress the investigation into VBS by casting shadows over the integrity of officials in National Treasury and the Reserve Bank. Since the VBS report, titled ‘The Great Bank Heist’, was released on Wednesday, the EFF has retracted into a stony silence. A tame media statement on Wednesday evening, released just before 21:00, reiterated the party’s position ‘that all who are responsible and illegally benefited from the fraud must be criminally prosecuted immediately’. While details are still somewhat sketchy, this is what we know so far:

This story was updated post-publication to include a statement by Brian Shivambu. It was subsequently amended again upon scrutiny of the evidence regarding the complex funnelling of the funds. See also our followup report here explaining the clarification – based on available evidence at the time. Investigations continue.

The damning investigative report into VBS, commissioned by the Reserve Bank and released on Wednesday, found that Brian received R16,148,569 in “gratuitous payments” emanating from the bank. The evidence detailing the Shivambu brothers’ nefarious activities consists of bank statements of the relevant entities – it was not included in the report to SARB because the investigators’ mandate related specifically to VBS.

The evidence is however kept under “lockdown”, sources said. It is now up to law enforcement to initiate and investigate criminal charges.

“We don’t exclude the fact that there were more money flows from VBS through other fronts to the EFF and Shivambu,” a well informed source said.

The VBS Mutual Bank report, titled “The Great Bank Heist” and investigated by Adv. Terry Motau SC and law firm Werksmans, is a tale of the elderly, the poor and several municipalities duped into banking with what started off in the late ‘80’s as the Venda Building Society.

Motau and Werksmans’ damning report into fraud, probable money laundering and reckless business practices found that around 53 people unjustifiably and illegally received R1.89-billion between 2015 and 2018.

It is against the Municipal Finance Management Act (MFMA) for municipalities to bank with VBS. The Reserve Bank got wind of these contraventions of the MFMA as well as serious allegations of corruption at VBS and put the bank under curatorship amid a liquidity crisis in March 2018. (More about the liquidity crisis later.)

The MFMA was written by Treasury official Ismail Momoniat – the longest serving Deputy Director General at National Treasury. Momoniat was a driving force behind finding out what was happening behind the opaque veil at VBS. As part of his portfolio, Momoniat often reported to Parliament on the matter. The Shivambu brothers’ secret involvement in the VBS scandal pitted Floyd, in his role as Member of Parliament and Deputy President of the EFF, against Momoniat, National Treasury and SARB.

Shivambu’s panicky and vitriolic reaction to the probe culminated into racist remarks about Momoniat’s non-Africanness; a debacle that left the EFF smarting from an unexpected public retaliation in June 2018.

Shivambu, Malema and the EFF have since maintained that the party is only concerned for the black-owned bank’s clients. On Wednesday night, just before 21:00, party spokesperson Mbuyiseni Ndlozi released a tame press release devoid of its usual punchiness. (He was unreachable after news of Brian Shivambu’s VBS windfall broke, and after releasing his press release, Ndlozi remained unattainable.) Where Ndlozi’s Tuesday press release – relating to Nhlanhla Nene’s resignation as minister of finance – referred to Nene being “party to the most unpatriotic state capture by a family of foreign nationals”, his Wednesday press release had no such resolute colour.

Said Ndlozi: “The EFF reiterates its position that all who are responsible and illegally benefited from the fraud must be criminally prosecuted immediately.”

“The law enforcement agency must do all they can to ensure that all the money that can be recovered must be paid back in full including attaching properties of the individuals who benefited from the defrauding of VBS. The EFF is concerned by the findings that the bank cannot be saved. Shutting down the bank will not help efforts to increase black participation in the financial sector… it is concerning that such looting has been allowed to happen since 2015…”

Attempts to reach the Shivambu brothers directly were unsuccessful on Wednesday.

But on Thursday afternoon, Brian Shivambu responded in a statement posted by Floyd Shivambu on Twitter:

The liquidity crisis is, in simple terms, blamed on the fact that VBS managers, politicians and tenderpreneurs – like the Shivambu brothers and EFF – gutted the bank into implosion. To avert a crisis of skeletons spilling out of the closet, the bank managers tried to solicit big payments from state entities such as the Passenger Rail Agency of South Africa (Prasa). General Manager of Treasury at VBS Phophi Mukhodobwane, a key witness in the investigation, testified that VBS had attempted to solicit R1-billion from Prasa in late 2017.

Mukhodobwane testified that a “commission” – read “bribe” – of R1.5-million was paid to a group of union officials from Satawu (South African Transport and Allied Workers Union) who claimed to be able to facilitate such a large deposit from Prasa, the report found.

“VBS paid that amount to the Satawu officials, through a front, in anticipation of the deposit being made. According to Mukhodobwane’s understanding, the successful facilitation of the deposit from Prasa would be dependent upon ‘NDZ’ succeeding to the Presidency of the ANC at the party’s elective conference held in December 2017. Mukhodobwane testified that after the ‘unexpected’ outcome of the ANC elective conference, a renewed attempt was made… to solicit the R1-billion from Prasa. The plan was stymied thanks to an unrelated (yet connected) investigation into Prasa.

Mukhodobwane himself stole R30-million from the bank, Motau and Werksmans found. He further testified against Danny Msiza, Provincial Treasurer of the ANC in Limpopo. He described Msiza as a “kingpin” in the scheme where municipalities were connected with VBS while the middle man would be paid a “commission” – a fee that classifies as a “bribe” and is illegal under South African law. Motau and Werksmans said Mukhodobwane was “extremely reluctant to reveal [Msiza’s name] and he expressed fear about his personal safety as a result of making this disclosure.”

The EFF: Falling into a trap it has built for others

Hours before SARB released its investigation into the VBS Mutual Bank scandal, the EFF ramped up significant public pressure against ANC stalwart Nhlanhla Nene. He lied about meeting the Gupta family and evidence implicates his son, Siyabonga Nene, as possibly having benefited from a dodgy PIC deal. (amaBhungane and Mail&Guardian wrote about it here.)

The EFF campaigned hard against Nene – he could not stay on as minister of finance, he had to resign or be fired.

EFF spokesperson Mbuyiseni Ndlozi said on Tuesday that Nene’s “continued stay as minister of finance is not in the interest of South Africa. Treasury cannot be presided over by a person without integrity, Nene lied on numerous occasions about his role in Cabinet and government… He also facilitated the capture of the state by the criminal Gupta syndicate. He was party to the most unpatriotic state capture by a family of foreign nationals.”

The EFF ultimately contributed to forcing the resignation of Nene as minister of finance.

With clever sloganeering, the EFF has, since inception, also created a campaign around the involvement of former President Jacob Zuma’s son Duduzane with the Gupta clan. Parliament was disrupted on several occasions, often turning into violent outbursts. Ndlozi’s famous “uBaba ka Duduzane” was turned into a popular song.

Now the red berets have been caught in a trap of their own making: Their top structures are deeply implicated in the VBS scandal. Brian Shivambu allegedly funneled around R10-million of his stolen R16.1-million to his older brother Floyd through a company of which Brian is the sole director, sources claimed, and the party itself allegedly benefited to the tune of R1.3-million.

It is now a situation, clever Twitter commentators said, where “uBaba ka Duduzane” will be measured against “uBhuti ka Brian”.

The fallout so far:

On Wednesday evening the Public Investment Corporation (PIC) denied VBS official Phophi Mukhodobwane’s testimony that its CEO Dan Matjila may have received R5-million in cash from the VBS loot.

Motau and Werksmans did state that “… Mukhodobwane is unaware of whether or not the R5-million was indeed paid to ‘Dr Dan’…”.

The PIC also announced that it has taken important steps against its two delegated Directors on the Board of VBS Bank, Ernest Nesane and Paul Magula. Motau and Werksmans found Nesane received R16.6-million and Magula received R14.8-million in incongruous payments from VBS. Magula was dismissed for incompetence in April 2018 and Nesane resigned two days after testifying before Motau, the PIC statement said. The Financial Sector Conduct Authority also granted the PIC’s application to debar both officials. The PIC has also applied for Nesane to be struck from the roll of attorneys. Criminal charges will also be laid against Nesane and Magula.

Motau and Werksmans further found that former KPMG partner Sipho Malaba knew about a nearly R1-billion cash shortage at the bank, but signed off on VBS’ financials anyway. He was gifted about R28-million for being a team player. KPMG must be held liable for damages incurred by the VBS curator, National Treasury and the Prudential Authority, Motau and Werksmans found.

Because Malaba defrauded the Reserve Bank, he should also be criminally charged. Malaba and another KPMG partner Dumi Tshuma had resigned in April 2018 when their part in VBS’ failure became known. DM

Attempts to reach the Shivambu brothers directly were unsuccessful on Wednesday. Ndlozi did not answer questions posed on email.
On Saturday Floyd Shivambu released a statement saying “I have never received R10-million from VBS or anyone in my personal account”.
Questioned on Twitter over whether he personally benefitted, or received any amount of money, through a front or any person, coming from Vele or VBS, Floyd said: “I did not.”
Scorpio’s sources, who worked with the VBS and Vele bank statements, maintained that he did benefit personally.