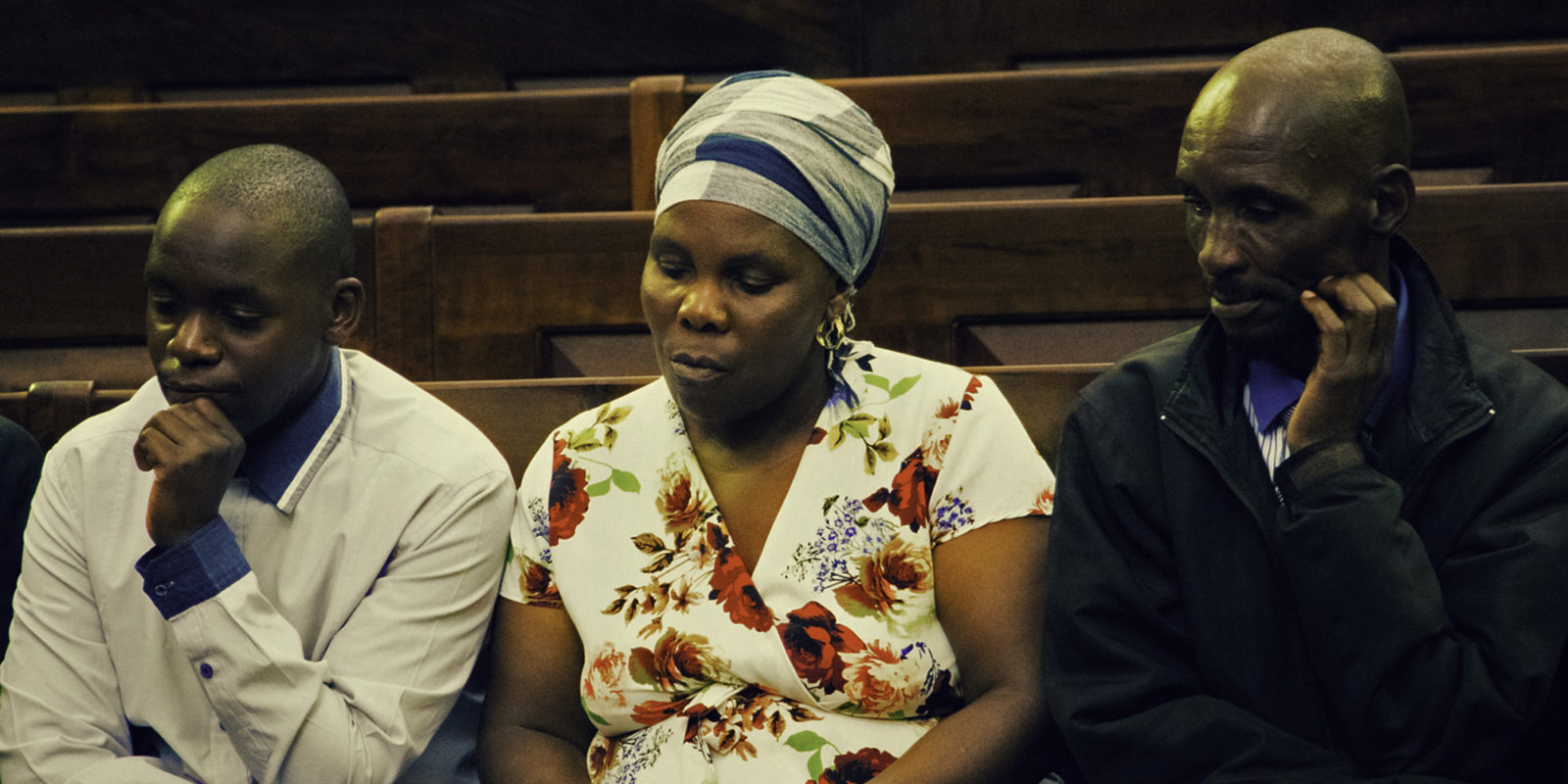 ‘Each one of us is horrified at the circumstances of Michael Komape’s death and we intend to ask Mr Phaswane, the state’s counsel, to pass that on to his clients,’ said Judge Mohamed Navsa, the presiding judge at the Supreme Court of Appeal hearing of the Michael Komape case on Monday.

When Michael Komape was born on 3 October 2008, his parents, James and Rosina, could not have imagined the journey his short life would take them on. Michael died on 20 January 2014 in a pit toilet at his school at the age of five. Since then, his parents’ journey to find the truth, justice and atonement have been almost as long as his life.

Thus it was that on Monday 2 September, James, Rosina and Michael’s brother Lucas took their seats inside the Supreme Court of Appeal (SCA) in Bloemfontein. It felt as if Michael’s restless ghost was there too.

In their heads of argument, SECTION27’s team of advocates Vincent Maleka SC, Adila Hassim and Nikki Stein describe Michael’s death “as the ultimate betrayal of the constitutional promise”.

We will only find out whether or not the five judges of the SCA agree with them when their judgment is delivered. But presiding judge Mahomed Navsa set the tone at the start of the hearing when he commented:

“I can’t think of a death more undignified.”

In April 2018, when Judge Gerrit Muller of the Polokwane High Court in Limpopo handed down his judgment he also castigated the government for what he termed the “flagrant violations of rights” of Michael and other learners. But, despite this, he dismissed the Komapes’ claims for general damages due to psychological injury, which he said had not been proved. He also dismissed their claims for constitutional damages on the grounds that this would have “over-compensated them”.

Instead, he ordered the Limpopo government to fix toilets and report on progress to the court (what lawyers call a structural order) – an order it has since then manifestly failed to comply with and which Judge Muller has refused to deal with until the conclusion of the SCA appeal.

What this meant was that while Michael’s death alerted South Africa to the dangers faced by learners, the pain and suffering his family endured was overlooked by the law.

Despite our grand Constitution and its promise that everyone has a right of “access to courts” and “appropriate remedies”, the Komapes were given only a dollop of short shrift for the loss of their son.

Bravely, the Komapes endured their misfortune and resolved to continue their journey.

It was for this reason that on Monday 2 September SECTION27 was appearing before the SCA.

From the outset, Judge Navsa made no bones about his disagreement with Judge Muller: “I was taken aback when I read the judgment and thought: ‘What’s going on here?’”.

“Why, if the state had conceded that the Komapes had suffered emotional and psychological harm, had the judge not awarded damages?” he asked.

All five judges – Boissie Mbha, Zukisa Tshiqi, Eric Leach and Malcolm Wallis – seemed in no doubt that the Komapes had suffered terrible harm. Judge Navsa was at pains to list the multiple ways in which Michael’s death had been compounded by the government’s subsequent behavior – from the brutal manner of Michael’s death (Judge Wallis called it “this appalling case”), to the way his body was discovered with his hand protruding from faeces, how his body was left for hours in the toilet and later the neglect by the government of his family, including its failure to issue a meaningful apology.

The judges’ outrage at the state of school sanitation was also apparent.

Judge Navsa said: “I don’t think a single one of us here (pointing to his fellow judges) would have allowed our children to use these toilets,” which he described as a “system that no decent, educated, human being would want to use”. When he asked Maleka if he “could think of a single common law defence to the state of the toilets … I ask you, can you conjure up one?” Maleka said he couldn’t.

However, sympathy for the Komape’s case seemed to end there – and so too did focus on the meaning of Michael’s death. After that, the hearing moved into the more opaque crevasses of constitutional law.

In addition to damages for emotional shock, SECTION27 had asked the court to compensate the Komapes for the intense “grief” caused by the uniquely horrible circumstances of Michael’s death. This is where it gets technical. Non-lawyers might be surprised to know that grief is not recognised in the common law of damages. As a result, SECTION27 asked that the SCA bridge the “chasm between the values promoted in our law of delict and those promoted in terms of our Constitution”.

If the court couldn’t do that, SECTION27 asked the SCA to make an exceptional award of constitutional damages, just as retired Deputy Chief Justice Dikgang Moseneke had done in his award for the Life Esidimeni victims.

SECTION27 asked the court to factor in dignity, ubuntu, the right to a family and the Komapes’ legitimate expectations that the school would act in loco parentis. This, they said, was necessary to inject urgency into the state fixing school toilets.

But this, it seems, may be a bridge too far for the Supreme Court of Appeal.

In addition, the judges seemed to believe that the interest and safety of other pupils in Limpopo had been catered for by the structural interdict. They didn’t seem to appreciate that constitutional damages served not just a public interest, but should be part of relief the Komapes as a family were entitled to in response to the multiple constitutional violations that had caused Michael’s death.

In passing though, they did mull an interesting idea, one that ought to have pricked the ears of Equal Education and others who fight for quality public schooling. They seemed to suggest that all children still subject to what Judge Wallis termed “disgusting, I hesitate to call it ‘toilet’, facilities” are suffering from an ongoing and continuous violation of their rights that would entitle them to sue the state.

But they left that idea hanging.

Finally, and troublingly, SECTION27’s request that the SCA make a declaration that the government had acted unlawfully by violating learners’ rights – known as a declarata, once a holy grail for public impact lawyers – was spurned. This was not because the SCA disputed that there were grave constitutional violations, but because the judges seem to have decided that despite its presence in section 172 of the Constitution declarata now have zero impact on delinquent governmental behaviour.

That is, they are not worth the paper they are written on.

President Ramaphosa, this is a tragic indictment from the SCA of a government that pledges fealty to the Constitution.

Towards the end of the day, the state’s advocate MC Phaswane SC took the stand. Phaswane is a lawyer who has for several years defended his government clients and cast aspersions on the Komapes – at one point even suggesting they were seeking to profit from their son’s death. He reminds one of Lawyer Tangle in Charles Dickens’ novels.

Soon after he rose to speak, however, he was cut short and asked by Judge Navsa “to take instructions on whether it was really the government’s position that the Komapes were exposed to an occurrence that is a regular feature of human life that didn’t have a profound and exceptional effect on the Komape family”.

He went into a huddle with the state attorneys and emerged with his bubble punctured.

“The instruction is that we don’t persist.”

And thus, the day ended with a whimper.

Law is a strange beast.

Rosina, Lucas and James Komape had been in court all day, mute observers, sitting passively while their pain was dissected and debated, their grief and emotions filtered through archaic laws with Latin names, while their grief was articulated in Sepedi. They probably couldn’t understand what policy issues like “not opening the floodgates” had to do with their floods of tears.

But they were clearly relieved at the end of it. Although the language was obtuse, they sensed the sympathy of the judges.

Perhaps they too can now rest. They have done their duty as parents.

I walked away with mixed feeling. Michael had had another day in court. It will most likely be his last. Probably, his family will come closer to receiving a damages award that respects their dignity and recognises the scale of their loss.

But it also felt like a missed opportunity to develop pro-poor law on behalf of the little Michaels who, to get an education must still risk life and limb every day for something as basic as visiting the toilet.

*Disclosure: Mark Heywood is the former Executive Director of SECTION27. SECTION27 has led the litigation against the State on behalf of the Komape family. MC