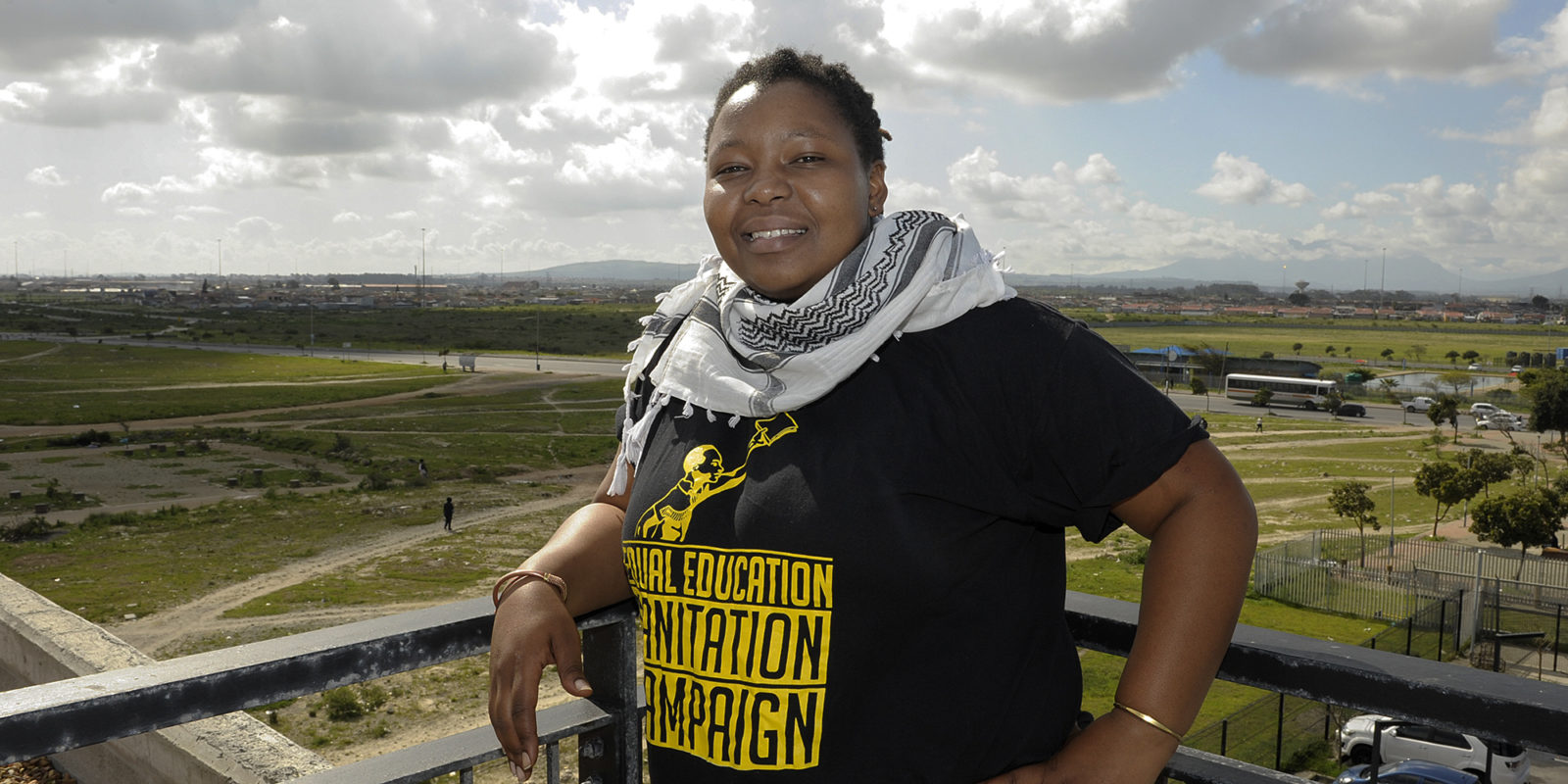 Equal Education General Secretary Noncedo Madubedube is at the frontline of the fight for quality and equal education in South Africa. Photo: Joyrene Kramer

The South African government might be trying to ignore her, but she is determined to point out the manifest errors of their ways and to fight injustices in our schools.

She drops an F-bomb or two. It’s been a manic day, “a mess” she says, fanning her face with her hand. She’s had a television interview and two radio interviews in response to risqué tweets by Department of Basic Education spokesperson Elijah Mhlanga. Over the weekend, Mhlanga tweeted photographs of half-naked women with books, as part of the department’s “Read to Learn” campaign.

“This is unacceptable,” says Madubedube. “So, we’ve been having internal discussions about what on earth is going on here, how can he be so tone-deaf? He is the mouthpiece of the department. If he can’t think beyond this kind of misogynist expression, it’s beyond me.”

We are walking through the bright office space, with comrades and colleagues calling out greetings to Madubedube. There is an air of focus; voices are hushed as fingers tap away on keyboards.

Equal Education envisions “quality and equal education for every person in South Africa”. A social movement with a staff of 71, EE monitors schools and national education policy, advocating for change where there are gaps. The movement’s most grassroots tier is the “Equalisers” – high school activists in grades eight to 12.

Eighty percent of EE’s core staff is female. But being “women-lead” does not make the organisation any less combative, declares Madubedube, now seated at her desk. “We’re here to fuck shit up,” she says. And by “shit” she means injustice in South Africa’s education system.

Injustice irks Madubedube and fighting it is her purpose in life.

“Somebody asked me the other day, what do you think you did in a previous life? And I was, like, you know, whoever I was, even if I was a Norwegian white man, I think I would always have been deeply unsettled by injustice.”

To illustrate the sentiment, she quotes American novelist Alice Walker: “Activism is my rent for living on the planet.”

“Yes, I grew up listening to Brenda Fassie,” she says. “I mean, Brenda was queer.”

Madubedube realised she was gay during her teenage years at Victoria Park High School in Port Elizabeth.

“Late into high school I started figuring out that I had this ease thinking about intimate relationships with women,” she says. “I was like, well, maybe it could actually be nice. Then in grade 10 I had my first girlfriend.”

Madubedube, now 28, grew up in Kwamagxaki, near Port Elizabeth, the youngest of five children born to municipal official Nomvuyo, a member of the Presbyterian Church of Africa’s clergy. Nomvuyo raised the children alone, impressing on them her passion for education.

“My mother was very big on education,” says Madubedube. “It was very important for her to spend more than what we had to send me to what is known as former Model C schools. I’m pretty sure that, to this day, she is paying off some of my high school fees.”

Church was a cornerstone. “The thing I appreciate most about Christianity is that it allows a sense of community – where poverty can isolate you. Church was crucial to my upbringing. Between the ages of 10 and 18 it taught me my politics, the modalities of running a political movement; while also being a large part of my well-being and joy.”

During her formative years, Madubedube had an A1-size poster of Steve Bantu Biko in her bedroom. On the family bookshelf, I Write What I Like had pride of place. Two of her older brothers were members of the Azanian People’s Organisation (Azapo) and the Azanian Student Convention (Azasco).

“Growing up, the essence of black is beautiful was imprinted in my mind. So, in going to mostly white-populated schools, I had to lean on that to understand who I was and where I was different.

“At home, we listened to Peter Tosh and Bob Marley. The language of revolution was always in our house. Instead of watching “Generations” or whatever soapie was on, our family time was spent watching and discussing the news.”

In 2009, Madubedube moved to Cape Town – to enroll at the University of Cape Town and to explore her identity and sexuality, a breakaway from her “good girl” childhood.

Does she reconcile her Christian beliefs with being gay? “Yes, absolutely,” she retorts. “Women have always been portrayed as centres of power in moments of strife in the Bible. So, being in my body, and being in love with other women, has always felt like I am leaning into one of God’s greatest creations. The concept of being unloved or dirty as a result is dumbfounding to me. I believe that if there is a heaven the pearly gates would shudder and open wide for me.”

Madubedube ran into financial trouble at UCT. In 2013 she switched to the University of the Western Cape, where a bursary covered her Bachelor of Education degree, with majors in mathematics and language.

She started volunteering to work at EE in 2012 and was elected general secretary in 2018. Among EE’s output under Madubedube’s leadership was a statement entitled “SONA 2019 – our crib notes for President Cyril Ramaphosa”, released just before the President’s state of the nation address in June this year. The statement makes detailed demands, based on analysis of the president’s earlier comments and promises related to schooling.

“The crib notes are basically a combination of things we’ve been talking about since October last year,” says Madubedube. “In writing that, we consult with members. We go: ‘What do you think we should be telling the president?’ We analyse speeches, analyse budgets around education, analyse policy as ordered, then look to see where the gaps are. What we’ve advocated for in the past and where we still don’t have enough remedial action.”

Since she has been leading EE, the organisation has never received a response to letters sent to Ramaphosa and to Minister of Basic Education Angie Motshekga.

“There just isn’t that kind of acknowledgement,” notes Madubedube. “Which makes me feel the ego of our government is dangerous. There’s such a deep lack of urgency, it’s almost scary to think what is going to happen in the next 15 years.”

Through Jacob Zuma’s presidency and since, issues within the Department of Basic Education have remained the same.

“The minister hasn’t changed. The lack of responsiveness to urgent calls for remedial action is still the same. It’s, like, super-nonchalant, super-careless, laissez faire about things that are critical.”

The activist is speaking more quickly now, words are fired out: “So we’re seen as an adversarial and cheeky group of young people because, yes, we have an impatience around this idea of building a capable state. We want it now. And for that to happen we need to shake political leaders in their boots.

“The Department of Basic Education has got mad capacity, but it isn’t used effectively. There’s absolutely no reason to hold such a strong budget and yet we still have pit latrines at schools across South Africa. There’s no reason for government officials, when they get an e-mail from someone in civil society – whether they recognise my name or not – not to give me an hour of their time.”

Madubedube grows tearful. She fans her face with a hand.

“With the fall of apartheid and the emergence of democratic South Africa, a political elite was built and that’s the group we need to monitor the most,” she says. “It’s okay for people to build wealth and to go from working class to middle class. But as soon as we’re building a political elite it means there’s a disconnect between the people who hold power and policy and the people on the ground who are actually affected. At present, there are deep infringements of young people’s constitutional rights.

“This is a dangerous thing,” she reiterates.

Does she get angry? “I get very angry. I have to try to be diplomatic consciously, because I am part of a bigger movement. If I acted just on my feelings, I don’t know, it would have been difficult. I just don’t think it’s fair. Once again, it’s the injustice of it. You know, a government not thinking beyond their own bureaucracies, not thinking about young people who literally are the future.”

Madubedube lives in Bellville, a 15-minute drive to the EE offices in her Datsun Go. Had she followed a more traditional African career path, she might well have trained as a sangoma, she says. Healing is a key interest and, once a month, she aligns her body at reiki sessions in Kenilworth.

“I have a reiki therapist, a friend,” she says. “When we meet, she runs her energies through my body and helps me align myself. We do a lot of crying. It’s a release. We pass messages to one another. She’ll tell me, ‘Look, the universe is telling me this, or the spirits are telling me that.’ Often light bulbs start going off in these moments of centeredness.”

Madubedube says goodbye with a hug. She needs to pack her suitcase for a flight to Jordan, where she is attending a symposium on global strength and solidarity, organised by New York’s Columbia University. She is exhausted and hopes to catch some sleep on the plane.

“My heart is shaking, a little bit,” she adds. MC