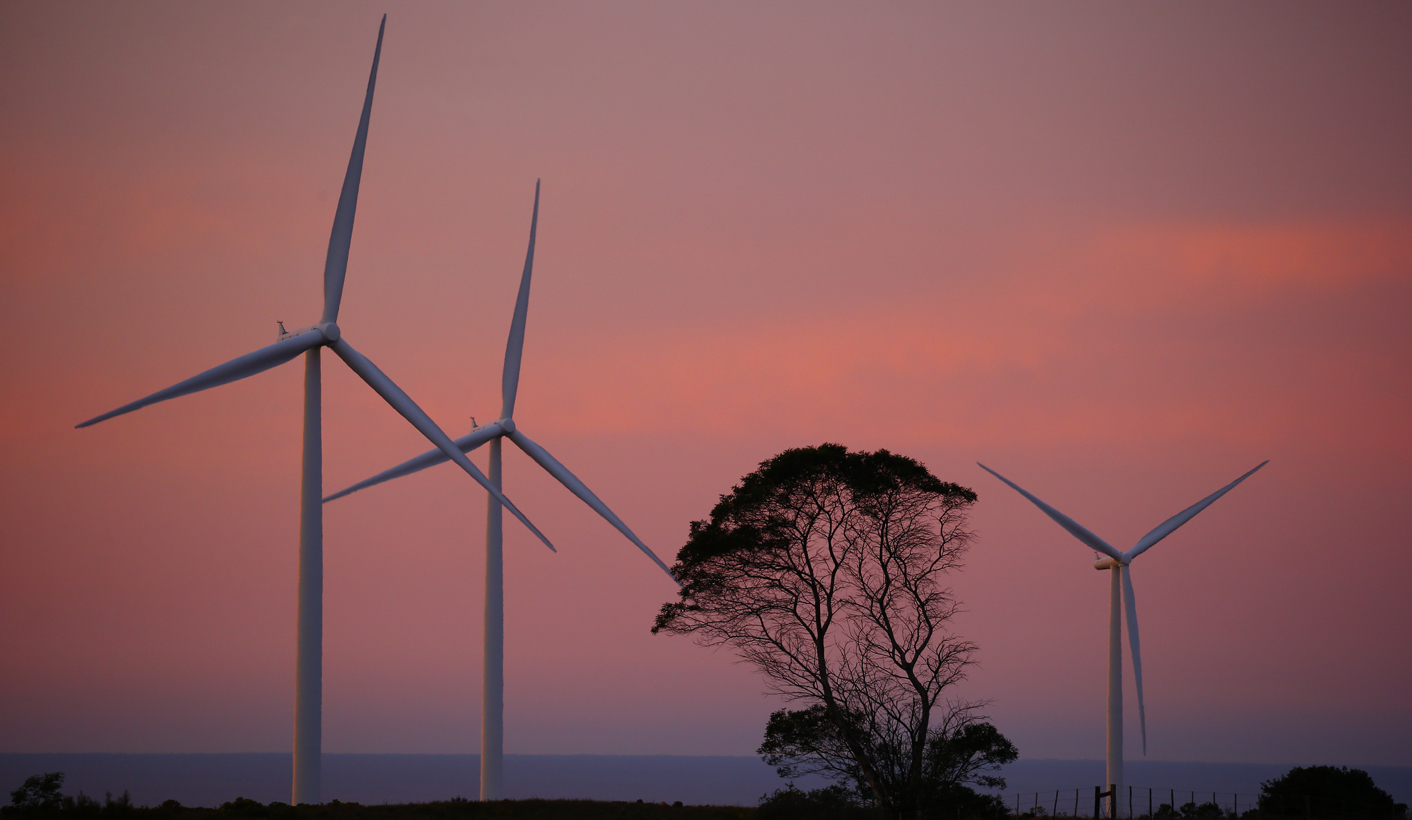 Garbage in, garbage out, as the saying goes. When looking at the levelised costs of different electricity options, it’s important to use up-to-date data, particularly considering the pace of change in the industry. The rate at which wind, storage, and solar resources can be developed renders integrated resource planning obsolete.

It is now clear – to all but the last few with vested interests in the fossil fuel and nuclear industries – that the wave of low-cost, storage-backed wind and solar energy is unstoppable.

The continued trend towards lower and lower costs of electricity generation using wind and particularly solar is causing major shifts in the electricity supply industry. However, this is not the only sector of the energy market to be disrupted. A recent study by French bank BNP Paribas shows that oil is “in relentless and irreversible decline” for light-duty vehicles and that it is now six to seven times cheaper to power cars by renewables than oil.

In South Africa, it is public knowledge that Eskom has a detailed decommissioning schedule for its existing coal fleet. By 2040 or so it is planned that only Majuba, Medupi and Kusile coal-fired power stations will remain online; by 2050, Majuba will also be retired. That is, of course, if Medupi and Kusile are ever successfully commissioned.

The reality is that the fleet is old, has been poorly maintained, is generally operating in flagrant violation of air pollution legislation, and is, in effect, “auto-retiring” one unit at a time, and sometimes two.

What Eskom doesn’t seem to have is a plan detailing how to mitigate job losses and the socioeconomic impacts of affected communities when units of the coal fleet are finally retired. Neither does it appear to have a plan about how best to replace the generation capacity associated with plant retirements.

If we woke up tomorrow morning and the entire Eskom coal fleet was gone, only to be replaced by a brand-new coal fleet; a new generation nuclear fleet; or a storage-backed wind and solar fleet, the wind and solar fleet would cost R100-billion a year less to finance, maintain and operate than a new coal fleet, and more than R200-billion a year less than a brand-new nuclear fleet. That’s per year and at current prices for storage, wind and solar, not future guaranteed lower prices. Note that the storage includes a small component (4% of total annual output) of stored (compressed or liquified) natural gas. With the continued drop in storage costs, this small amount of gas may not even be required by the time the fleet is fully retired.

It is worth noting that had this discussion about a replacement fleet taken place five or so years ago, a new coal-fired fleet would have cost about R100-billion less per year than a replacement storage-backed renewable fleet, such is the rate of change in the energy supply industry.

Nuclear the only way to go?

In a recently published opinion piece, Ivo Vegter lauds Minister of Minerals and Energy Gwede Mantashe for putting nuclear back on the table, as we will no doubt see when the Integrated Resource Plan for our future energy mix, the IRP 2019, is finally released in September. The column’s blurb shouts out “Nuclear energy isn’t just the best way; it is the only way South Africa can have electricity that is reliable, clean and cheap, which is a prerequisite for the economic reconstruction that is so desperately needed.”

I started reading the piece with some trepidation. Had I miscalculated current costs of the various sources of electricity supply? Had I failed to provide adequate security of supply in my detailed models? What was I missing? Before reaching the midpoint of the article, I had my answer. Vegter’s argument hinges on a 2016 Department of Energy study on the cost of nuclear power, a study that refers to a 2012 levelised cost of electricity (LCOE) study carried out by the Electric Power Research Institute (Epri).

As mentioned above: it is worth noting, that had this discussion about a replacement fleet taken place five or so years ago, the coal-fired fleet would have cost about R100-billion less per year than a replacement storage-backed renewable fleet, such is the rate of change in the energy supply industry.

I have added the most recent (2018) Lazard LCOE data to the 2012 Epri graphic cited in Vegter’s opinion piece to highlight the rate of change in the electricity-supply industry. I have little doubt that when Lazard publishes the 13th edition of its report, due in November 2019, the gap in the LCOE between wind, solar photovoltaic, and nuclear will have increased even further. 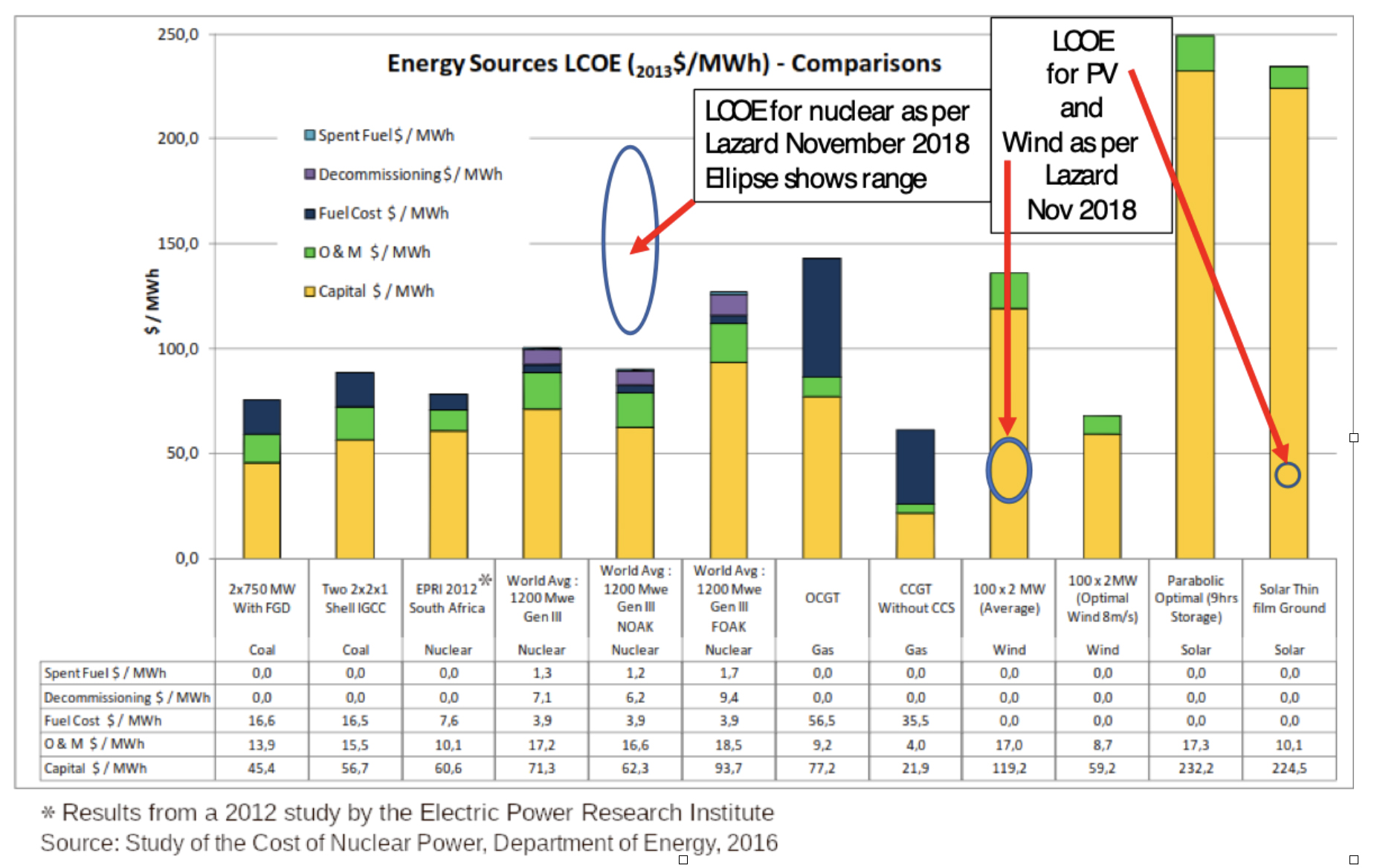 At this point of reading the article, I felt that it was unnecessary to further interrogate the “nuclear as the only way” hypothesis. Anyone so out of touch with the rate of change in the electricity-supply industry must surely be living a simple life cut off from the reality of what is transpiring in the actual world.

Planning the retirement of the Eskom coal-fired generation fleet

Even if a new coal or a new nuclear fleet cost less than any other alternatives – which is clearly not the case – the reality is that they will not be able to be permitted, built and fully operational in the time-frame dictated by the decommissioning schedule of the current Eskom coal fleet. Bear in mind that the old coal fleet is effectively “auto-retiring” itself ahead of any planned schedule.

The real issue facing South Africa is the need for a clear new plan about how best to use the inevitable transition from coal to renewable energy to effect meaningful transformation in the electricity-supply industry. This, however, is a topic for another opinion piece. Suffice to say that any attempt to transition without due consideration of the impact on jobs and local communities affected by coal-fired power station retirements, and the concomitant closure of coal mines, will be doomed to failure.

The good news is that the envisaged potential transition, when accompanied by wholesale transformation of the electricity-supply industry, is job accretive, and also provides a platform for broad ownership of the replacement fleet. Additionally, it will provide a massive boost to the construction industry, and all of the supporting supply chains.

What about the spatial footprint of nuclear and coal versus renewables?

If we used an area the equivalent size of the exclusion zone around Chernobyl for solar PV, wind and storage installations in South Africa, we could supply the current electricity demand of the whole of Africa.

The size of the Koeberg nuclear waste disposal site at Vaalputs in the Northern Cape is such that if an equivalent surface area were used for solar and wind generation, it would produce twice the annual output of the Koeberg nuclear plant. The size of the accompanying battery energy storage system would be about the same size as the actual Koeberg plant, not counting the exclusion zone around Koeberg.

The idea behind integrated resource (read future electricity supply) planning in South Africa, and no doubt elsewhere, goes something like this. Plans – usually with a 20-year horizon – always start off with estimates for future electricity demand, attempting to estimate the most likely or base-case future demand trajectory, and then creating a future-demand envelope with high-demand and low-demand boundaries.

The IRP 2010 is still the only officially ratified plan. Much has been written about why it has been nine years and we still don’t have an updated IRP. One of the underlying principles of the IRP is that it is a living plan that is meant to be updated at least every two years.

So, how do the IRP 2010 estimates for 2019 demand stack up? The estimated base-case peak demand for 2019 was 51GW. So far, in 2019, electricity usage topped out at about 33GW, and we are now past the high-demand season. The base-case estimate for annual consumption was 345TWh, and we are on track for about 210TWh. Our peak demand, as well as our annual total demand, is sitting at just more than 60% of the IRP 2010 base-case prediction, a prediction that informed the rationale of the rest of the IRP. In fact, our current demand is less than that of 2010, and falls way below the lower bound of the aforementioned demand-trajectory envelope.

A long-term plan based on a faulty premise is actually worse than no plan at all, in much the same way that a future energy mix based on seven-year-old LCOE data is flawed, not to mention grossly misleading.

The main reason and need for future energy supply planning – in the past at least – is the long lag time between new build programmes and commercial operation dates. If Medupi and Kusile had been completed as planned, and reached full commercial operation in 2014 and 2015, we would have had to retire about a third of the existing coal fleet four years ago, or sit on a surplus of 10GW of generation capacity, given the grossly overstated future demand predictions as per the IRP 2010.

The rapid rate at which additional wind, storage, and solar resources can be developed renders integrated resource planning obsolete. More, or fewer new resources can be brought online in lockstep with load requirements, literally as they evolve. The electricity requirements of a company considering investing in a new ferrochrome smelter, for instance, can easily be met well inside the time-frames required to build the smelter, and the requisite amount of additional wind, solar and storage can be installed timeously. Not so with a new coal or new nuclear build, where a minimum of six to 10 years notice would be required.

Let me repeat that. We no longer require long-term integrated resource planning, as the least-cost electricity supply options providing the requisite security of supply can be ordered, or deferred, on demand. This changes the whole game: within the next decade, the electricity-supply industry will be unrecognisable from what has served us for the past century.

Thank you to the first adopters

We are indeed fortunate to be able to benefit from the rather expensive “school fees” paid by the likes of Germany and California to subsidise the R&D costs of renewable energy. The pendulum has swung, and it will now require subsidies for any new coal or nuclear fleets to be able to compete with renewables. Who in their right mind would want to subsidise yesteryear’s technology? Who would want to commit to an additional expense of between R100- and R200-billion a year to replace the current Eskom coal fleet? Who still thinks that long-term integrated resource planning has the slightest relevance in the modern electricity-supply industry?

Clyde Mallinson is a geologist who has previously lectured on Earth history. Over the past decade, he has focused more on Earth future. He spends an inordinate amount of time estimating things in his head, and most of the rest of his time testing his estimates with computer simulations. He plays bridge in an attempt to relax.