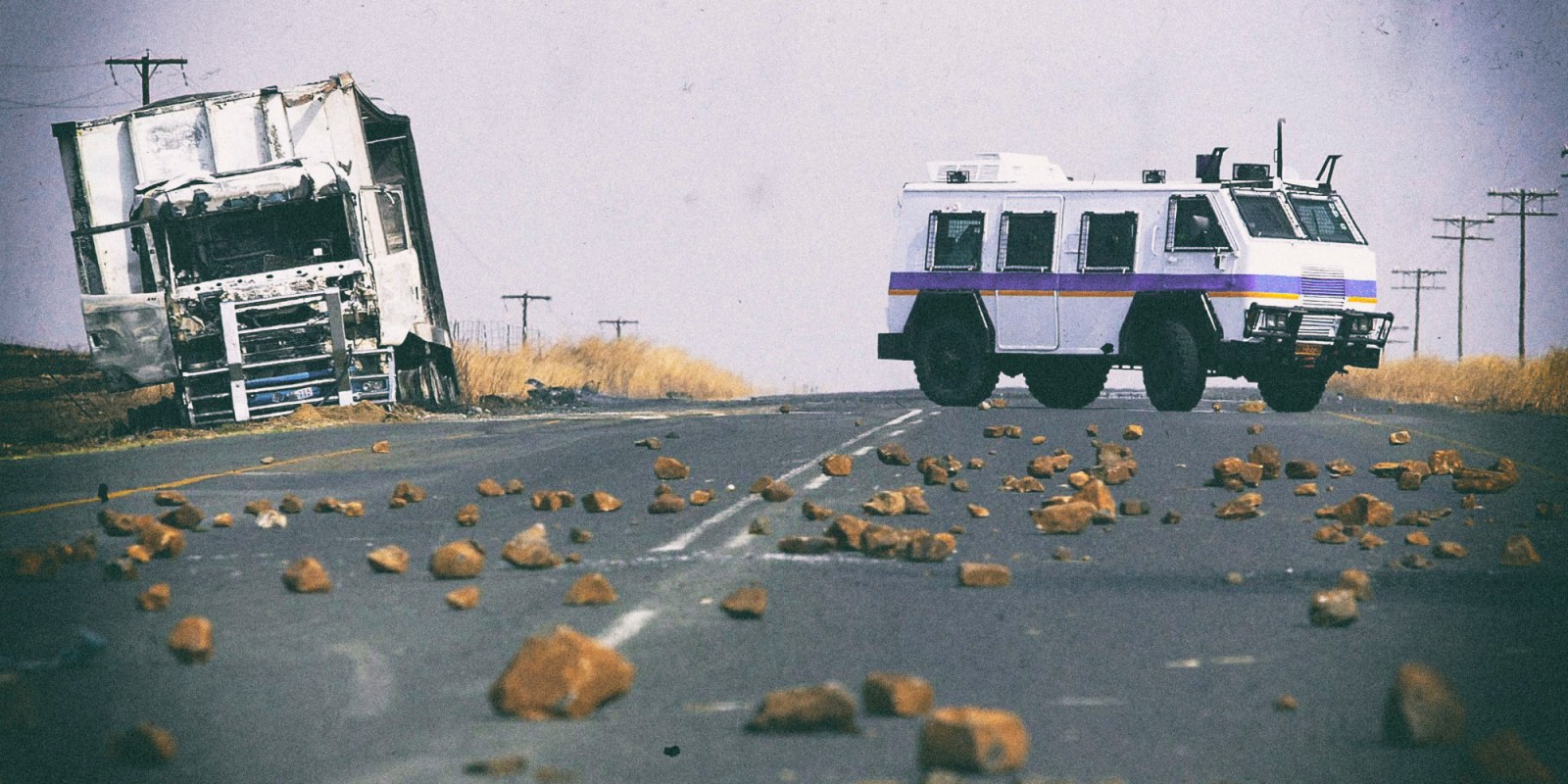 An SAPS riot vehicle passes by a burnt-out truck that was attacked and set alight by rioters of the Mafube township near Frankfort in August 2005; the stones in the road were used as a makeshift barricade on the main road to ambush vehicles between Villiers and Frankfort. Photo: Gallo Images/Media24

Foreign truck drivers are under attack in South Africa. They have been stoned, stabbed and harassed as South Africans demand they be prioritised for jobs in the industry. A new report says the government is failing to protect them.

A Zimbabwean truck driver was unable to speak for three days after he was attacked in the early hours on 27 April 2019 at the Durban port. The driver was asleep in his truck when a petrol bomb was thrown and set the vehicle on fire. He escaped but spent two months in hospital with severe burns.

The incident is one of the gruesome attacks against foreign truck drivers in KwaZulu-Natal and Mpumalanga detailed in a Human Rights Watch (HRW) report released on Monday that calls on the government to urgently stop the ongoing violence.

The Road Freight Association estimated that over 200 drivers had been killed between March 2018 and July 2019 while local driver associations demanded that foreign truck drivers be replaced with locals to boost South African employment.

“Groups of people claiming to be South African truck drivers have thrown gasoline bombs at trucks and shot at, stoned, stabbed, and harassed foreign truck drivers to force them out of the trucking industry,” it reads.

“Many foreign truck drivers have lost their jobs, despite having valid work permits, or have been unable to return to work due to injuries or damage to their trucks. Some of the attackers claimed affiliation to the All Truck Drivers Foundation (ATDF), an association of local truck drivers.”

The report cites a Zambian truck driver who said he was confronted by a group of eight men in Ermelo, Mpumalanga on 23 June 2019 claiming to be from the ATDF. Three had pistols. They threatened to kill the five drivers on the road and forced them to flee their trucks.

While the HRW report suggests the ATDF may be linked to the attacks and has made xenophobic comments to incite violence, the organisation’s chairperson Sipho Zungu told Daily Maverick it had only called on companies and the government to enforce the law and ensure locals were prioritised for driver jobs.

“We are not xenophobic here. We are not attacking anybody. All we are doing is asking for justice to be done,” said Zungu.

“South African drivers are sitting at home starving while the foreigners are driving the trucks,” he said.

An inter-ministerial task team was established to resolve the dispute. It includes the ministers of transport, labour, home affairs and police, but HRW said little had been done to curb the xenophobic attacks.

“Any problems in the trucking industry, including undocumented drivers, are for the relevant authorities to address, and there is no defence for groups committing such violent, horrific crimes.”

The inter-ministerial task team condemned the violence and called on the authorities to act against attackers, but most of its commitments relate to ensuring foreigners aren’t employed illegally as drivers.

The team expressed concern about freight companies either employing foreigners illegally or through loopholes and committed to ending illegal employment. It planned to implement a skills development programme for local drivers, establish a database for unemployed local drivers to help them get work, and review work permit legislation.

“It is not true to say [the] government is not doing anything,” department of labour spokesperson Makhosonke Buthelezi was quoted by AFP. “Whether it is enough, we can only judge later.”

While the HRW has criticised the effectiveness of the government’s response, the ATDF also feels little has been done.

“None of these task teams have come up with a good result,” said Zungu.

When contacted by Daily Maverick, SAPS spokesperson Brigadier Vish Naidoo suggested the frequency of attacks had reduced since 2018 and early 2019, but he was unable to provide detail without getting further information from other departments in the task team and various SAPS regions.

In June, Police Minister Bheki Cele said 91 suspects had been arrested in connection with the attacks but few had been prosecuted and most charges related to minor traffic offences.

Another driver was killed last week in Paddock, KwaZulu-Natal. He was found with bullet and burn wounds next to his burning truck.

Following a spate of attacks in June, the Inkatha Freedom Party called for the army to be deployed to KwaZulu-Natal to prevent “terrorists” from holding the province’s economy to ransom.

In response to the attacks, the Zambian High Commission recently warned its citizens who work as truck drivers not to travel to South Africa from 2 September. It said locals had called for protests on the day when a court interdict application from industry body the Positive Freight Solutions Forum against the ATDF will be heard in Pietermaritzburg.

Zungu denied that the ATDF had called for protests or an industry shut-down on the day.

The HRW report said that some drivers had been dismissed for negligence after they were attacked, while others were told not to report to work due to safety concerns but were not paid while they were at home. DM