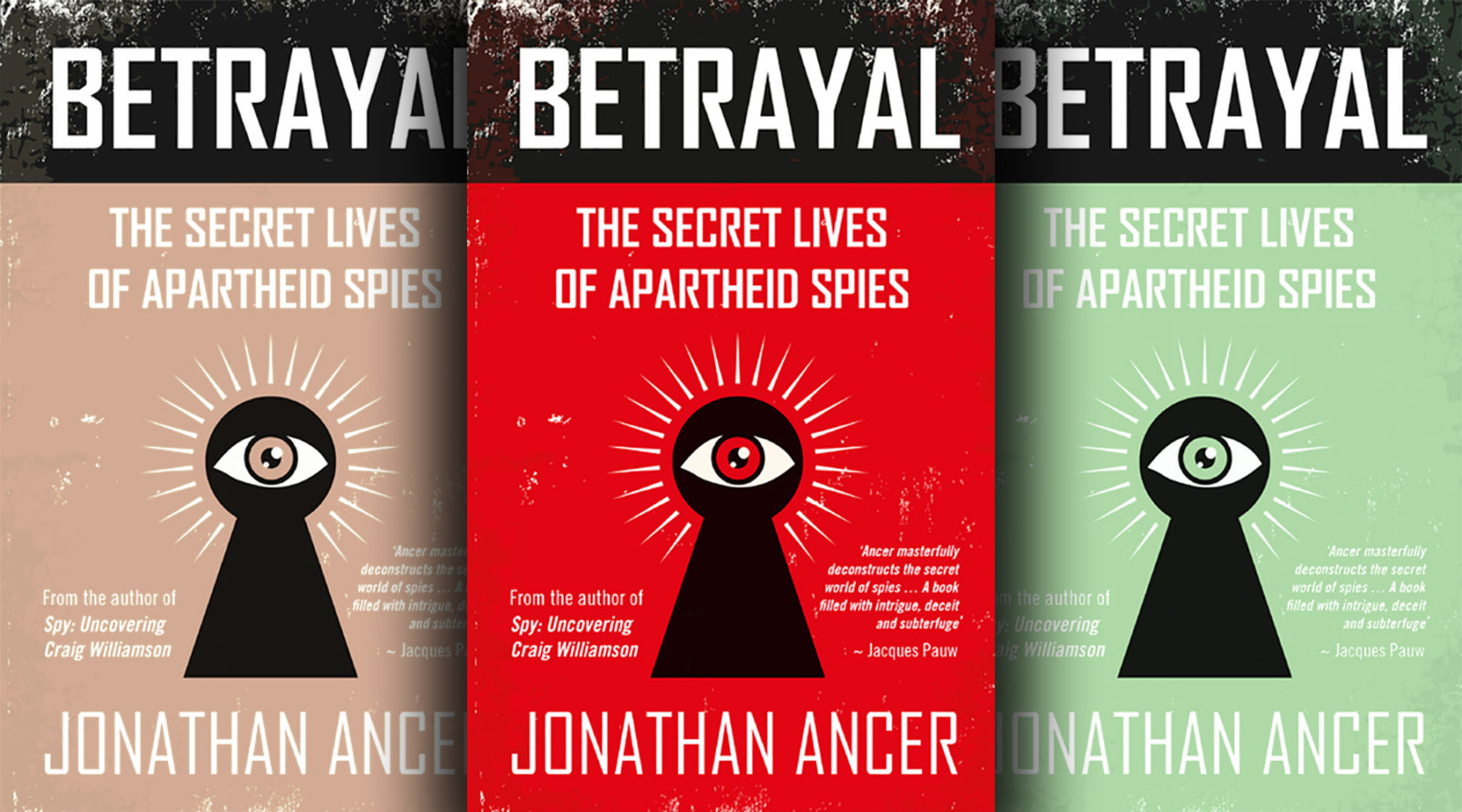 Testifying at the Zondo Commission of Inquiry into State Capture in June 2019, a bitter and cornered former President Jacob Zuma unsheathed a vicious invisible weapon — he accused three of his comrades of being apartheid spies and agents.

Journalist and author Jonathan Ancer has for years been intrigued by the internal moral architecture and landscape of individual South Africans, black and white, who chose, opted or were coerced into spying for the hated apartheid regime at the height of its power in the 1980s (and some before then).

Their choices or decisions affected the lives of thousands of fellow South Africans, who were abducted, tortured, assassinated, detained and some jailed for life as a direct consequence of this collusion and betrayal.

The accusation in modern-day South Africa that someone might have been a spy for the apartheid regime without a shred of evidence to back it up is a vicious and desperate blow aimed at placing those “outed” in a moral and ethical wasteland from which it is hoped they will not escape, forever tainted.

“It is an impossible accusation,” said Ancer speaking to Daily Maverick ahead of the launch of his second, just-published book Betrayal — The Secret Lives of Apartheid Spies (Tafelberg).

Zuma’s unprecedented, cavalier and reckless disclosure to the Zondo Commission that three senior ANC members, Ngoako Ramatlhodi, Siphiwe Nyanda and the late Cyril Raymond, had been spies for the apartheid state, is a trick the former president and his keepers tried once before in 2003.

It backfired badly then.

In Chapter 13 of Betrayal, Ancer details the spurious accusation by ANC state security boss Moe Shaik and ANC veteran Mac Maharaj, that Bulelani Ngcuka, the first National Director of Public Prosecutions and head of the Scorpions, had been an apartheid spy.

Without a shred of evidence and based on pure conjecture, Shaik and Maharaj claimed Ngcuka was Agent RS452. It is no surprise that at the time Ngcuka was investigating ANC politicians implicated in corruption, including Jacob Zuma.

It was only after activist Janet Cherry — who had been present at all the UDF and National Association of Democratic Lawyers (Nadel) meetings in the Eastern Cape in the 1980s (details of which were fed to the security police) — pieced together the puzzle with fellow activists Glenn Goosen and Theresa Boulle, that the true identity of Agent RS452 was revealed.

The agent was well-known and liked Eastern Cape human rights lawyer Vanessa Brereton and not Bulelani Ngcuka, who wasn’t even in the Eastern Cape at the time.

It was the “charismatic” special branch recruiter Karl Edwards, who had preyed on Brereton’s need for affirmation, who had turned her into a spy. Ancer dedicates a chapter to Edwards and his remarkable ability to manipulate or exploit the weaknesses of individuals involved in anti-apartheid activism to get them to spy for the enemy.

Brereton, whom Ancer dubs “the lonely spy”, fled to England in 1997 just as the Truth and Reconciliation Commission was getting underway. Brereton hid her past and her double life from her new husband and, writes Ancer, had “hoped it would go away”.

“And it probably would have if she hadn’t been caught up in a power struggle between Jacob Zuma and Bulelani Ngcuka.”

For Ancer, the book is an attempt to understand what it is that motivates individuals to spy on fellow citizens. He spent three years tracking down spies who had been unmasked to ask them why.

“I wanted to scratch at their betrayal and explore how they managed to build relationships of trust and lead double lives, how they maintained the boundaries between their real identity and their spy legend.”

The end result is a gripping, vivid and unputdownable excavation of the lives of the spies Ancer was able to track down and engage with all these years later. Not all spied for the apartheid state, however.

Ancer begins his book with the major coup of hunting down former SA Navy commodore Dieter Gerhardt, who had for years acted as a spy for the Soviets at the height of the Cold War. The story of how Gerhardt rose through the ranks of the navy to become one of the most successful Russian spies reads like vivid and epic spy saga — and Ancer’s talent as a writer and spy hunter is evident in this opening chapter.

The second spy to work for the “other side” was enigmatic Kimberly-born Jennifer Miles who, star-struck by the Cuban revolution, found her way to the South African Embassy in Washington where she began to spy for the Cubans.

It’s an incredible story, as spy legends usually are, but in the end, Ancer is not convinced that she told the truth about who she actually worked for.

Roland Hunter, a conscript into the South African Defence Force, became an “accidental spy” for the ANC when he found himself moved to Military Intelligence. His story, too, is one of astounding risk and naive courage.

The thing about spies, says Ancer, is that “these people are not ‘official’. They operate in the shadows, they don’t have a job description. They infiltrate, cause confusion and manipulate.

“For these spies, causing chaos, that was their value to the government. People did not trust each other. No one got out intact, we have not dealt with it. What these spies were doing is what fake news is doing now,” Ancer told Daily Maverick.

Betrayal is a follow-up to Ancer’s acclaimed 2017 first book, Uncovering Craig Williamson, a meticulously researched account of the apartheid “super-spy” and assassin.

Ancer had embarked on his first book, when, turning into Ruth First Avenue in Durban some years ago, he had wondered out loud to a young fellow passenger what Craig Williamson would think today of a road named after the anti-apartheid activist and journalist Williamson had cold-bloodedly murdered after sending her a powerful letter bomb in Maputo, Mozambique in 1982.

“Who is Craig Williamson?” the young passenger had responded.

A man who had been responsible for so much treachery and pain, including also the murder, via a parcel bomb, of Jeanette Schoon and her six-year-old daughter Katryn in Angola in 1984 as well as bombing the ANC headquarters in London should not be allowed to slip into the shadows in post-apartheid South Africa, reckoned Ancer.

There is a follow-up chapter with Williamson in Betrayal, a creepy interview in a lodge filled with hunting trophies where Williamson sets out the extent of the apartheid network of spies across the anti-apartheid resistance movement, including the ANC.

There are other lesser-known spies Ancer tracks down, those who colluded, willingly or unwillingly with the apartheid regime and whose actions resulted sometimes directly, sometimes indirectly in the murder, torture and detention of thousands of anti-apartheid activists from across the political spectrum.

For some, living with the consequences has affected the rest of their lives. Today they continue to live shadow lives, haunted by their choices.

For his second book, Ancer said he had wanted to “explore the triple themes of betrayal, repentance and forgiveness”.

“I was curious how the apartheid spies were able to live double lives, get close to and befriend people, even celebrating with them at their weddings, while passing on information about them to the security police that put them in harm’s way.”

The author has singled out about a dozen spies, all of whom had been unmasked, and all, apart from three who had spied for the apartheid regime, are white.

“The spies I write about are all white and except for one, Mark Behr, English-speaking.”

Behr, said Ancer, was one spy he felt had truly attempted to ask for forgiveness for his treachery, outing himself in public.

Ancer says he did not set out to find only white agents, but they were readily available for two reasons.

“First, most black spies paid a much higher price than their white counterparts for their betrayal, and aren’t alive to talk about it. Whites who infiltrated the liberation movement and who were exposed got to live.”

For “Askaris” — black apartheid agents — turning was a choice between life and death, which, when you think about it, isn’t much of a choice at all.”

South Africa, says Ancer, had “thousands of intelligence agents working in various roles and in an assortment of agencies to protect the apartheid state.”

Hennie Heymans, a former special branch handler, tells the author that “we gave our agents the assurance that we would never blow their cover or divulge their identity. Our promise still stands”.

The consequences for those affected by the betrayal of the bonds of decency, friendship and trust by these spies in circumstances of heightened conflict as an authoritarian and unaccountable regime targeted the citizens of a country are still with us, says Ancer.

Ancer writes that “there are many apartheid agents as well as agents who worked for the liberation movement who have yet to be unmasked, and most will probably remain in the shadows forever”.

Ancer understands the need for a state or a government to use intelligence or spies to protect itself from potential threats, “but when a government uses them on its own people it is a problem. A unit that is shrouded in secrecy that accounts to nobody is a problem”.

The past, says Ancer, is still the present.

Betrayal is a gripping, albeit disturbing read — vivid in the recreation of the times through newspaper clippings and court documents.

Ancer has written a vitally important book that not only serves to highlight the participation of white South Africans in the Struggle, but also the terrible betrayal, by their comrades, of the ideals of freedom and justice. DM