Ramaphosa vs Mkhwebane: Bad moon rising for the public protector? 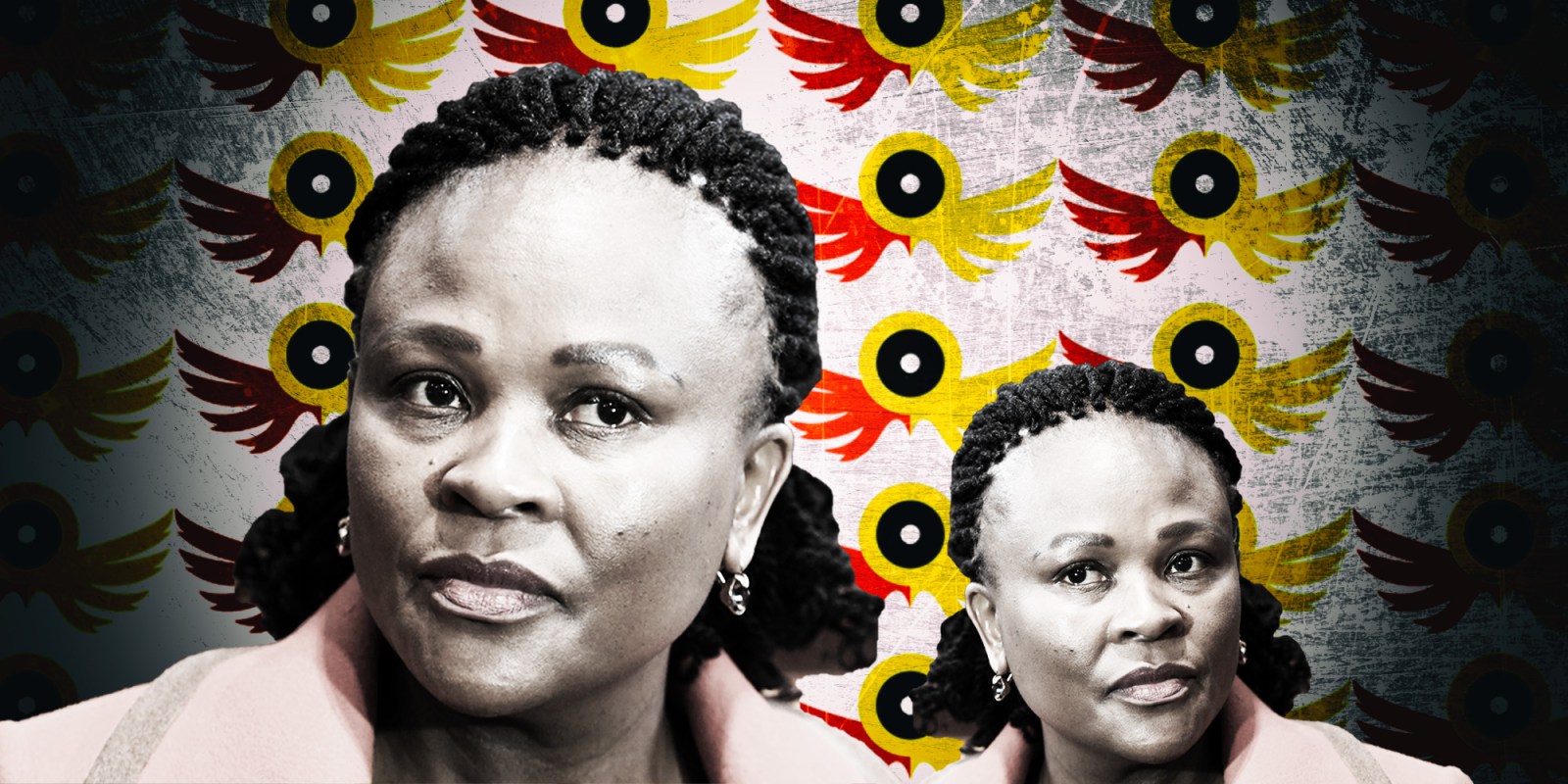 The legal machinery is being cranked up against Public Protector Busisiwe Mkhwebane. In fights such as these, it can be vitally important to get all legal technicalities absolutely correct. Now, apparent mistakes on her part are coming back to haunt her.

In the tussle between President Cyril Ramaphosa (and people around him) and Public Protector Busisiwe Mkhwebane, there are continuous ebbs and flows. Over the past two days, it appears that the situation is now swinging back against Mkhwebane.

While there is no decisive action yet from Parliament, this week’s statement from the ANC backing Ramaphosa over his leaked campaign emails suggests that she may now be on the back foot. At the same time, the legal machinery is being cranked up against her. In fights such as these, it can be vitally important to get all legal technicalities absolutely correct. Now, apparent mistakes on her part are coming back to haunt her.

On the morning of Wednesday 7 August, it emerged that Mkhwebane had suffered what may become an important setback. Head of the National Prosecuting Authority Shamila Batohi had written to Mkhwebane, suggesting that the public protector may have misunderstood her powers. In a letter (wonderfully described as “extremely polite” by the Mail & Guardian) Batohi asks Mkhwebane whether the NPA is being directed to investigate wrongdoing on the part of Ramaphosa or whether certain facts are merely being brought to its attention.

The wording here matters. Batohi is of the view that under the Public Protector Act, Mkhwebane can merely bring certain issues to the attention of the NPA. In her remedial action on the complaint relating to the CR17 campaign donations, Mkhwebane said that the NPA must “conduct further investigation” into alleged money laundering. She also said the NPA must give her an implementation plan for her to know what progress was being made in the investigation.

Batohi seems to be suggesting that Mkhwebane does not have the power to tell the NPA to investigate or to start a prosecution. Certainly, that could lead to a very complicated situation if the Office of the Public Protector were to tell the constitutionally independent NPA which cases to investigate and prosecute. Anyone trying to force the issue in court would surely lose as the NPA is the authority that deals with prosecutions, not the Office of the Public Protector.

Batohi’s response could be understood plainly that Mkhwebane overreached. If, as many believe, her motive was to put political pressure on Ramaphosa, there was no better way to do it than by suggesting that he and his campaign were guilty of an illegal act and should be prosecuted. Certainly, her findings in this regard forced Ramaphosa himself to address the nation on the issue.

But now it could look like she simply didn’t understand the limitations of her powers. Worse, it leaves space for Ramaphosa’s supporters to say that it is obvious she was overreaching deliberately for political gain.

Unfortunately for Mkhwebane, it is also possible that a judge has the final word here. While she could easily change the wording of her finding in response to Batohi’s letter, Ramaphosa’s lawyers are likely to use this in their application to overturn her findings. They will point to this as evidence that she both doesn’t understand her powers and has a political agenda.

In the meantime, the organisation Accountability Now has lodged criminal charges against Mkhwebane for her conduct in the Absa/Bankcorp case, in which the Constitutional Court upheld a personal costs order against her. The reason for the delay, in this case, is that Accountability Now director Paul Hoffman would have wanted to wait for the Constitutional Court to make its findings against her. Now that it has found that she is guilty of lying under oath, he can claim that she is also guilty of deliberately trying to mislead a court.

Mkhwebane could not wish for a more difficult opponent than Hoffman. Not only is he a senior counsel off his own bat as an advocate, but he is also the man who lodged the original complaint about the Absa case with then public protector Thuli Madonsela. He will know the full details of the case.

He also has nothing to lose in pursuing this case. Already, Hoffman has also lodged complaints with Parliament and the Presidency, calling on them to remove Mkhwebane from her position (which requires a two-thirds majority of sitting MPs, but the president has the power to suspend the Public Protector when the relevant committee sits to discuss the issue). This could well provide useful cover for Ramaphosa if he does suspend her, as he could say that he is merely acting on these complaints.

In the meantime, head of the Hawks Godfrey Lebeya has confirmed that they are investigating Hoffman’s complaint against her.

This should, in theory, be a relatively easy complaint to investigate because all documents submitted in the case can be used as evidence. In other words, judges found that Mkhwebane lied under oath based on what she submitted in documents to a court. Those documents provide the proof that she lied. The ruling of the court is obviously a finding that can be examined by a presiding magistrate.

However, Lebeya has also confirmed that the Hawks are suffering from a severe shortage of investigators. This has been well known for some time. Those who correctly call for action against former Steinhoff CEO Markus Jooste will be aware that the lack of capacity in the criminal justice system to deal with this kind of crime has limited investigations. The fact that the rich have impressive criminal lawyers means the stakes involved are very high and it would be embarrassing for the Hawks and the NPA to lose such cases.

That said, just the institution of criminal charges or a letter from the Hawks to Mkhwebane informing her of charges against her could change the political game here. It would indicate that while Mkhwebane has overreached in trying to force the NPA to investigate alleged criminal activity on the part of Ramaphosa, she herself will now face criminal charges for her behaviour.

There is still so much to come in this battle. Still, since at least 6 April 2009, politics has proven to be stronger and more powerful than the law (that was the date that the NPA announced it was withdrawing the corruption charges against now-former president Jacob Zuma). So it may well be here, in that the politics might move more quickly than the law.

Unless Mkhwebane is able to hit back in some significant way, Ramaphosa may soon be in a better political space where proceedings to remove her from office are underway. And once that starts she will be in a battle for survival herself and her ability to move against Ramaphosa will be severely restricted. DM