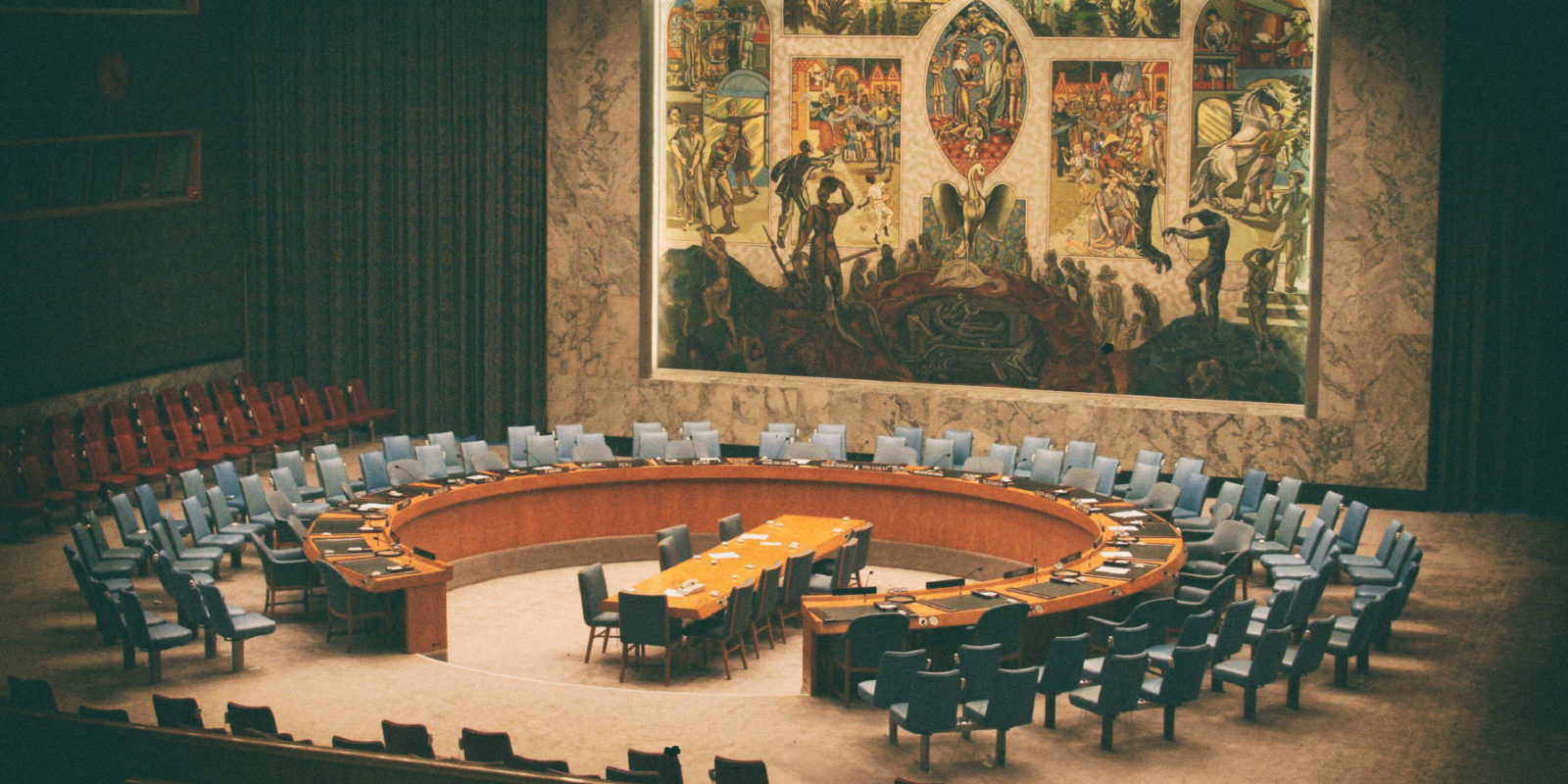 After a rocky start on the UN Security Council, during the second three months of 2019, South Africa ‘seemed to have developed more nuanced positions, neither aligning directly with Russia and China (the so-called P2) nor with France, the UK and the US (the P3)’, a panel of civil society experts assessing the country’s performance said. (Photo: Jay Reed/Flickr)

Experts believe that after a poor start on the UN Security Council, South Africa has begun to take more independent positions over the past three months.

South Africa stepped up its game during the second half of its first six months on the UN Security Council in 2019, showing greater independence from its usual allies, China and Russia, on a few key votes and issues.

That is the perception of some external analysts. The Department of International Relations and Co-operation (Dirco) held a workshop recently to assess the first six months of South Africa’s third two-year term on the Security Council which began on 1 January 2019, and to plan the remainder of its tenure.

Dirco officials received an assessment of South Africa’s performance from civil society, academia and media representatives, based in New York and South Africa, who had brainstormed at the Institute for Security Studies (ISS) beforehand.

These analysts noted that South Africa had taken its seat at the council “in a very divided and fractured geopolitical context” which affected its performance. This referred to the growing divides in the world and on the Security Council, mainly between the Western nations on the one side and Russia and China on the other.

The foreign policy experts said South Africa’s votes on the crises in Venezuela and Democratic Republic of Congo (DRC) during SA’s first three months on the council had raised concerns about the coherence and independence of its positions.

On Venezuela, South Africa stood fully behind the embattled regime of Nicolas Maduro, voting against a US-sponsored resolution that rejected the re-election of Maduro last year as flawed and called for new free and fair elections. Pretoria said this resolution was part of a regime-change agenda, as Washington (and many other Western and South American countries) had recognised opposition leader Juan Guaido, head of the National Assembly, as the rightful leader of the country. Pretoria voted instead for a Russia-sponsored resolution demanding that Maduro’s government be allowed to resolve the country’s problems without outside interference. Both resolutions were defeated.

On DRC, South Africa backed the country’s Electoral Commission declaration of Felix Tshisekedi as the victor in the 30 December 2018 presidential election, while several Western Security Council members called for scrutiny of the results, as most independent analysts believed that another candidate, Martin Fayulu, had actually won by a landslide.

But during the second three months of 2019, South Africa “seemed to have developed more nuanced positions, neither aligning directly with Russia and China (the so-called “P2”) nor with France, the UK and the US (the “P3”), the civil society experts said.

“South Africa’s explanation of (its) vote following the April debate on Sexual Violence in Conflict and the June deliberations on Sudan, in the context of the Unamid mandate renewal negotiations, were seen as potential indicators of the nuanced direction South Africa would take in the council,” they explained.

Unamid is the UN peacekeeping mission in Sudan’s western province of Darfur, which has been racked by conflict for well over a decade.

In the debate on Germany’s resolution calling for stronger action to curb sexual violence in conflict and to provide greater care for survivors, South Africa found itself at odds with both the US on the one side and China and Russia on the other. SA strongly supported Germany’s proposal that these survivors of violence should be given greater access to sexual and reproductive health services.

The US opposed this proposal because it understood it to include the right to abortion (for instance when a woman conceived through rape). Germany eventually dropped the reference to sexual and reproductive health to avoid a US veto. But Russian and China still abstained from the final vote because they said the resolution would impose excessive monitoring requirements on the UN. SA supported the resolution despite its misgivings about the removal of the call for female victims of sexual violence to get access to sexual and reproductive health services.

On the Sudan issue, South Africa found itself at odds with Russia and China again because they argued their usual position of non-interference in the country’s internal affairs after the military seized power in the wake of popular protests that toppled President Omar al Bashir on 11 April.

By contrast, South Africa and the two other African countries currently on the Security Council, Cote d’Ivoire and Equatorial Guinea, strongly backed the African Union’s Peace and Security Council in condemning Sudan’s military junta for its unconstitutional seizure of power and suspending it from the AU.

During debate on renewing the mandate of Unamid, Russia and China initially argued again that Sudan should be left to deal with the Darfur problem without external interference, while South Africa instead stood with Western countries in insisting that Unamid’s presence should be extended because of the new and uncertain circumstances in Sudan created by the military’s overthrow of Bashir. Russia and China, however, eventually supported the extension of Unamid’s mandate.

Analysts also praised South Africa for taking a lead in ensuring the Security Council renewed the mandates of the UN peacekeeping forces in Sudan and South Sudan.

South Africa’s ambassador to the UN, Jerry Matjila, however, insists that the country has never been aligned to any bloc on the council and that it has always voted independently, according to the merits of each case.

And so its basic posture at the Security Council hasn’t changed during the last three months.

“What we normally do as South Africa, we look at an issue, we check our policies, principles and our Constitution,” he told journalists.

“We check the Charter of the UN. I read the Charter all the time. We check into the agreed position of the African Union on these issues. There is a very complex set of issues we have to look at. “Then we say these are our positions. Sometimes it does happen that our positions mirror those of the P3 [the Permanent 3], the US, France and UK, sometimes Russia and China. Sometimes everyone.

“But we don’t take a position to be with so and so. That’s not how we decide. We want to make sure that when we audit our positions when we reflect our positions, we can explain to our people, that this position is based on this principle, on this constitutional provision, on this AU decision and also on this position which we have discussed.

“We don’t take a position because this alliance says so. No. It’s just a coincidence. But it’s good sometimes if people look at us as independent, thoughtful. That’s why countries are beginning to say, ‘What does South Africa think of these issues? What does the A3 think about these issues?’ It’s because we have this independent foreign policy and people know what we stand for.”

However, the civil society analysts said they were not always completely sure what South Africa stands for or why, particularly in its positions on sanctions.

However, it seems that for South Africa the critical difference between South Sudan and DRC may be that the South Sudan sanctions also apply to some members of President Salva Kiir’s government who are deemed to have obstructed the peace process, whereas the DRC sanctions only apply to armed rebel groups. It seems that here, as elsewhere, Pretoria favours incumbent governments.

This raised questions among the analysts about what exactly the objective benchmarks are that SA uses to determine its voting on sanctions. It suggested Pretoria should produce a White Paper or other policy document to make these guidelines clear to all.

And they also recommended that in such guidelines, South Africa should list the perpetration of sexual violence in conflict as a stand-alone criterion for imposing sanctions.

That would also fit in with South Africa’s enthusiastic support for the Women, Peace and Security agenda at the UN, which it had demonstrated in its robust and independent diplomacy supporting Germany’s resolution to curb sexual violence in conflict.

The analysts also felt that South Africa could raise the country’s profile further by playing a more prominent leadership role on the Women, Peace and Security agenda which is playing a growing role in UN affairs. It includes a strong push for women to play a much greater role in peace efforts as well as the need for far stronger measures to protect women from sexual violence during conflicts.

The experts commended Dirco for drafting a National Action Plan for Women, Peace and Security to implement UN Security Council Resolution 1325 of 2000. This resolution demands an equal role for women in the prevention and resolution of conflicts, and for special measures to protect women and girls from rape and other forms of sexual abuse in armed conflict.

The analysts said South Africa’s presidency of the Security Council in October this year, when the council is scheduled to hold an open debate on Resolution 1325, would give it a special opportunity to take the lead and set the tone for the 20-year commemoration of Resolution 1325 in 2020.

The analysts commended South Africa for uniting the three African countries on the Security Council – SA, Cote d’Ivoire and Equatorial Guinea – into a bloc that had increased its leverage, especially on Sudan.

SA’s presidency of the Security Council in October presents opportunities for the country to raise its profile, but the analysts all felt that instead of just raising certain themes, it should aim to use its presidency to “mainstream” important issues such as Women, Peace and Security into practical resolutions. DM