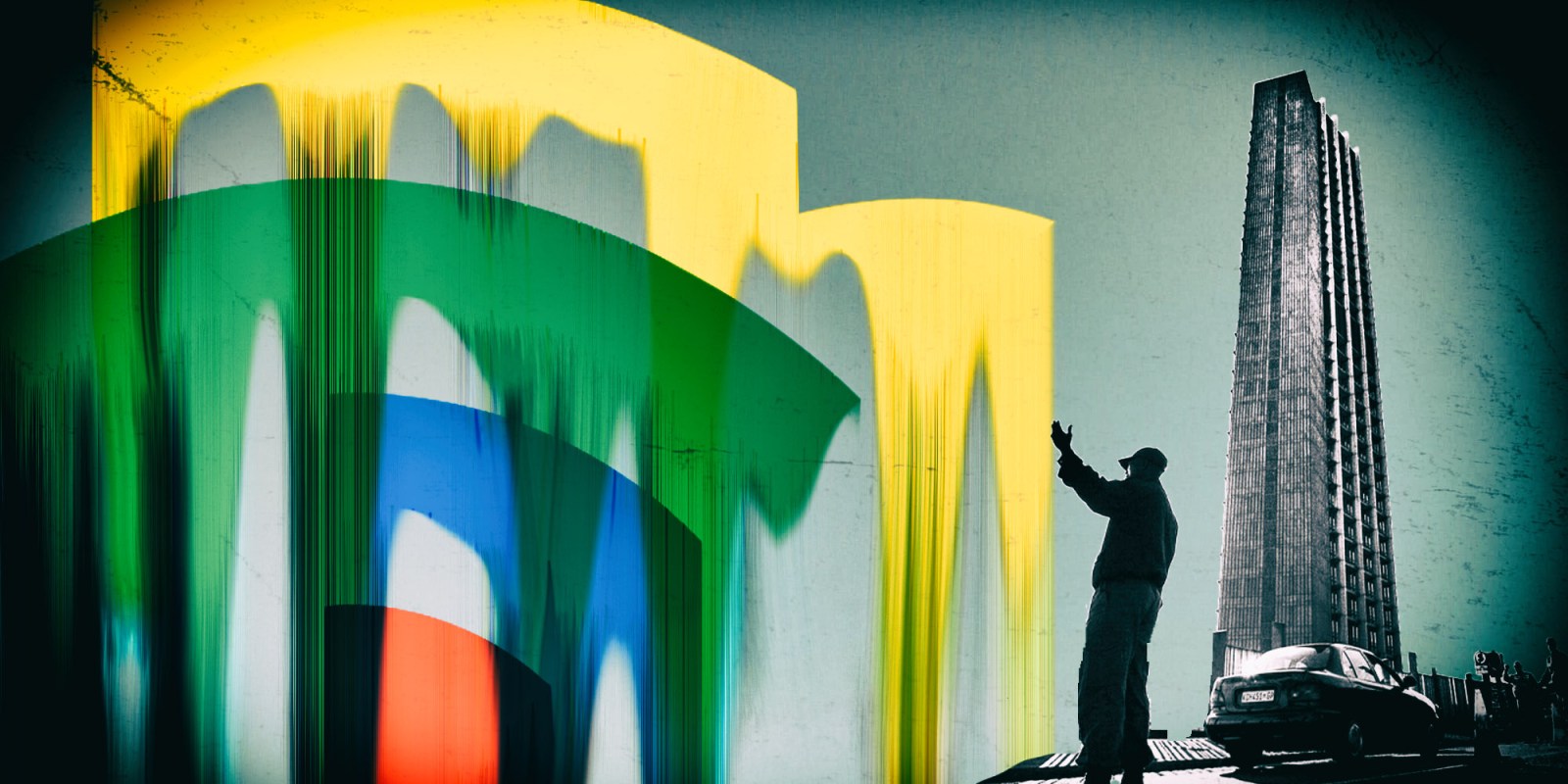 Veteran journalist Joe Thloloe and law firm director Stephen Tawana have produced a report into edtiorial interference at the SABC with abundant ‘texture’ and ‘feel’, but few details of the why and how, says the writer. (Image source: EPA / JON HRUSA)

The long-awaited report into interference in SABC News sketches a work environment haunted by fear, bullying and diktats from above. Hlaudi Motsoeneng and Faith Muthambi come in for a drubbing. What isn’t explained is who was pulling the strings behind the scenes.

If what you want to know about the SABC and “the texture of life during Hlaudi Motsoeneng’s reign”, or “a feel of what it was like in the SABC newsroom”, look no further.

The much-anticipated report into interference within SABC News was released on Monday 5 August, and the descriptions above are lifted straight from it.

The report was authored by veteran journalist Joe Thloloe and law firm director Stephen Tawana, who were appointed in May 2018 to set up a commission to look into editorial, political, business and commercial interference within the newsroom of the SABC between 2012 and 2017.

What they have produced instead is something more impressionistic: “texture” and “feel” it provides abundantly, but the details of why and how the SABC became the personal fiefdom of characters such as former COO Hlaudi Motsoeneng, former communications minister Faith Muthambi, and former SABC board chair Ellen Tshabalala, are harder to discern.

Thloloe openly acknowledges that the commission’s work was hamstrung by the refusal of Motsoeneng and his two henchmen — former acting group CEO Jimi Matthews and former head of news Simon Tebele — to co-operate with the investigation.

Motsoeneng’s lawyers told the commission that their client would not agree to an interview due to his ongoing anger that the ad hoc parliamentary committee which established the inquiry had not permitted him to state his case.

The report notes that this makes little sense:

“It is ironic that a person who had been screaming for a chance to be heard thinks it is logical that he skips it and instead offers a blanket denial.”

Matthews’ reason for refusing an interview was that he did not wish to “relive the worst time” of his life. Tebele, meanwhile, said that he would not talk to the commission out of fear of being assassinated, pointing to the mysterious murder of former head of SABC legal services Sizwe Vilakazi in November 2017.

“It is worrying that a former head of the biggest news organisation in the country is living in fear that isn’t easy to dismiss as paranoia.”

The commission did carry out about 58 interviews with other SABC staff members, and also received public submissions. Of the latter, some sound less than helpful — such as the SABC radio listener who was convinced he had been blocked from expressing his views on phone-ins.

From the evidence presented, the commission concluded that the SABC “suffered from the capricious use of authority and power to terrorise staff and to deflect the corporation from its mandate and its editorial policies”.

It also found “an organisation crippled by pain, anger and fear; by frustration, anxiety and apathy; and by inattentiveness, detachment and helplessness”.

Yet while these findings are dramatically expressed, they also merely confirm information already aired publicly, particularly by members of the so-called SABC 8 — the group of journalists who courageously blew the whistle on editorial interference within the SABC newsroom.

Concrete examples of editorial interference are relatively thin on the ground in the report and add little to what is already publicly known. Business news anchor Francis Herd says that she was told to cancel interviews with opposition parties before the Budget; Faith Muthambi threatened to fire SABC journalists; and Motsoeneng scrapped The Editors radio programme because guests were “always lambasting the ANC”.

One anecdote, arising anonymously from a staff forum, tells how “the Women’s League demanded that an SABC crew go to Nkandla to cover them protecting Zuma’s home”.

“And throughout their four-hour drive, the journalists were shouted at and harassed by women who were calling them throughout their drive, ordering them to hurry. And I’m told among these women was the current Free State Premier, Sisi Ntombela.”

Yet newsrooms throughout the country are constantly pestered by political parties to cover events, as any journalist can tell you. The question is: what exactly would make SABC editors and journalists hop to it with such obedience?

For those lower down the food chain, there seem to have been constant threats of job-losses for non-compliance. But for those higher up, was it simply a case of following Motsoeneng’s edicts — and if so, what was the source for those?

The report admits it cannot answer that.

“The commission did not hear evidence alleging a meeting or meetings in smoke-filled rooms from which participants emerged with a plot to capture the SABC newsroom and with assigned roles in the plot. There were no email or SMS trails we could follow,” Thloloe writes.

And despite the fact that so much of the editorial interference was aimed at protecting or improving the image of the ANC, “we could not delineate a direct path from decisions at Luthuli House to editorial decisions in the SABC’s newsroom”. Despite this, Thloloe describes the “spectre of the ANC” as hovering over the newsroom.

Virtually the only deduction the commission could make on this front was that Motsoeneng was probably “linked to the office of former president Jacob Zuma”, a conclusion they reach based on Motsoeneng’s habit of name-dropping Zuma to achieve his desired outcome.

“The real motives of those who abused power and authority are still unclear as the people who could have explained declined invitations to talk to the commission. Was it sheer incompetence, personality disorders, or for monetary gain? We don’t have the answers.”

That is, maybe, fair enough — but what is harder to understand is the report’s limited ambit.

The commission was set up to investigate not just political and editorial interference at the SABC, but also “commercial and business interference”. Of these aspects, there is hardly a mention.

The report notes that “among other issues raised by witnesses” were the SABC/The New Age breakfast contract; and “allegations that there’s a plan to let Lotus FM collapse in order to privatise it and sell it to people who have already been identified”.

All the report has to say in response to these two issues: “The commission saw these as more examples of the chaotic decision-making and the distrust fanned by it.”

It does not deal at all with the 2013 channel distribution agreement between the SABC and Multichoice — for which Motsoeneng received an R11-million bonus, and which was apparently reached after the SABC agreed to back Multichoice on digital migration.

The commission’s recommendations to ensure that the SABC regains its editorial independence hinge mainly on the establishment of a news and current affairs advisory committee, made up of retired judges and editors and journalism academics, to provide guidance on editorial affairs.

It also recommended that all HR moves executed by Motsoeneng be audited. SABC head of legal Ntuthuzelo Vanara announced during the report launch that 34 employee appointments will be taken to the Labour Court.

The DA, meanwhile, has announced that it will be using the report to lay criminal charges against Faith Muthambi.

Although Muthambi told Parliament’s SABC inquiry in 2016 that she “never” interfered with editorial decisions at the broadcaster, the report concludes that Muthambi did indeed give instructions to the SABC newsroom.

As a result, the DA says it is laying charges against Muthambi for violating the Powers, Privileges and Immunities Act by misleading Parliament during the SABC inquiry.

The South African National Editors’ Forum said that while it respected the report’s finding that “there was no evidence of direct political interference from ANC headquarters”, it nonetheless implored the “new custodians of the SABC newsroom” to ensure that the broadcaster was protected from any form of interference in future.

One thing current SABC staffers can look forward to is “healing” and “team building”. Both need to be prioritised to help salve the wounds of the Motsoeneng era, the report concludes. DM