The ‘airbags’ that can fend off climate shocks 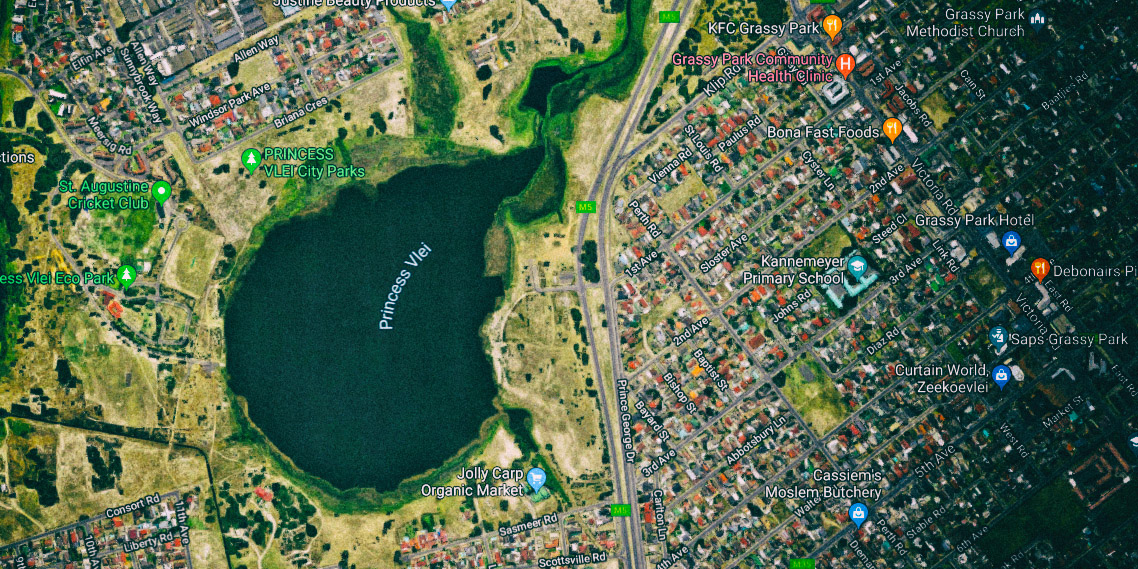 Protecting Princess Vlei n Cape Town was a tiny victory in the ongoing battle to avoid a death by a thousand cuts, says the writer. (Image: Google Maps)

We can’t outrun the escalating extreme events from climate change, but it’s crucial to nurture the green belts in our neighbourhoods to help absorb the shock of heatwaves, storms, droughts, ‘fire weather’, and tidal surges.

The 17-year-long battle to protect the Princess Vlei wetland in Grassy Park, Cape Town, from being sold off to developers and turned into a shopping mall was a story that seldom made the front pages of more than the local knock-and-drop newspapers. But when community activism culminated in an agreement with the City to restore this badly degraded vlei and protect it from future development, it was a story of national consequence.

Keeping wetlands and other green belts in our cities in their natural state isn’t about bending to the leisure needs of a few nature-loving birdwatchers or weekend picnickers. Protecting Princess Vlei was a tiny victory in the ongoing battle to avoid death by a thousand cuts. Every small, local-level decision to transform a natural space into a paved-over shopping complex or housing development is a slow killing of the natural systems that are the airbags that will help communities absorb the blow of climate shocks, as the impacts of climate collapse hit us harder and harder in the near future.

When a heatwave hits a city, green belts like the restored wetland in Makhaza in Khayelitsha, or the still semi-pastoral Philippi Horticultural Area on the Cape Flats, or Princess Vlei will help keep temperatures in the immediate vicinity lower, relative to the heat islands of asphalt parking lots or dense city centres.

When storm surges hit the peninsula, the rocky beaches of Oudekraal or Muizenberg’s dunes will be more likely to defuse the force of the waves than the cemented promenades along the Atlantic seaboard.

When “fire weather” comes to Cape Town – that lethal summer combination of low humidity, scorching temperatures, and howling south-easterly winds – bands of natural vegetation and trees in a neighbourhood will dampen the effects of the kinds of conditions that make fires in informal settlements so much more devastating.

When winter’s heavy rainstorms come, the grassy paddocks in Philippi will help pool the inundations of water, slow down flooding, and percolate the gathered water down into underground reservoirs where it can be drawn back up in summer if it’s needed.

The drought which nearly saw Cape Town’s dams run dry in 2018 was the worst in more than a century of record-keeping. No one saw it coming, or that it would stretch on for nearly three years. But while the city was grappling with engineering solutions to boost water supplies to avoid a similar crisis in future, conservationists pointed out that invasive alien trees growing wild or cultivated in the city’s main water catchments were using up the equivalent of two months’ supply of water at the time. Clearing these thirsty trees and restoring the rain catchments would give a better return on investment than building desalination plants or drilling utility-scale boreholes into aquifers.

These are just a handful of examples from one South African city which show how much we get from a healthy environment that gives us natural services and free ecological infrastructure (a use of engineering-speak by environmental scientists to demonstrate to non-environmentalists how important these systems are to us). These aren’t nice-to-have, they’re essential to keeping our communities healthy and safe.

Climate breakdown is inevitable, but we aren’t helpless

The magnitude of slipping into irreversible climate breakdown can leave people feeling helpless. The same probably applies to most people’s seeming impotence in the face of a failing South African state. Is there really anything we can do now, when state corruption has looted our coffers of the billions that should have gone to build schools, keep our electricity grid up and running, upgrade informal housing, or staff our public hospitals with well-trained people and stocked with supplies and drugs? What do we do when a decade of State Capture has eroded the institutions that were put in place to prevent that level of corruption?

The Cape Town drought was the local expression of what global climate collapse will look like, where day-to-day development and city management issues collide with an environmental shock. Until recently, climate “change” felt like it was just a slow-burning emergency, 300 years in the making. Now we realise it’s a wildfire, and it seems there’s nothing we can do to stop it.

The restoration of the Makhaza wetland in Khayelitsha, also in Cape Town, is another small, seemingly insignificant local story, that is as important as the Princess Vlei victory. A group of women there were fed up that a nearby vlei was buried under dumped building rubble and litter, and was overgrown with alien thickets. It was filthy, a place where no-gooders got up to mischief, and was useless to anyone else.

So they teamed up with the City and a few other willing organisations, and got to work: they cleared the thickets, hauled out the trash, planted lawns and flower beds around the water seeps, and now they have “their very own Kirstenbosch”. Its success wasn’t just in getting rid of a crime hot spot or having a nice community gathering point, although there’s plenty of scientific literature to show the psycho-social benefits of nature-based communal recreation spaces like this. It’s about keeping another one of those climate-shock airbags in place, particularly in an under-resourced community that’s already more vulnerable to extreme events than the plush suburbs of the city.

These small victories are a reminder that within our communities, within our small spheres of influence, we have the chance to shape the physical spaces and policy environments that will determine how resilient our cities, rural spaces, and neighbourhoods will be.

City decision-makers and politicians are under constant pressure to meet housing and service delivery backlogs, and make planning decisions that seem to be in the interests of boosting jobs and economic growth. It’s easy to understand why they might agree to turn over to development any land that seems open and seemingly useless.

Building developments might seem to have benefits that are easy to measure in a commercial or political sense: the rental returns and tax takings on an industrial development zone are much easier to show on the ledger books, than the rands-and-cents value of a wetland or forested green belt when it dampens the effects of a heatwave or flood. But this is a question of how we do our accounting, not a reflection of the value of the ecosystems or the services they give us.

Once a wetland or woodland or piece of the veld is bulldozed and concreted over, there’s no going back. Each apparently insignificant local-level land rezoning or development decision needs to be made with that in mind.

In spite of unavoidable climate breakdown, or the failures of the South African state, we’re not powerless. We have the chance within our own neighbourhoods to roll up our sleeves and get involved in any action that helps keep the environment in a state that our Constitution says we have a right to: one that is not harmful to our health or well-being; one that is protected, for the benefit of present and future generations.

Getting involved could mean marching alongside labour unions against lung-corroding industrial air pollution, or standing by boycotting school kids as they demand a lower-carbon economy. It could mean joining a river cleanup by a local community group, or demanding that a city doesn’t put a free-flowing river into a straight jacket of canalising cement.

To quote historian and author Yuval Harari, one of the best ways we can bring about the social upheaval needed to address climate collapse is to either join a civil society movement or start one. Those movements that protect green belts in cities are a starting point because every little victory to keep these spaces intact is a way to avoid death by a thousand cuts and shield us against the coming climate shocks. DM

This article first appeared in the Vrye Weekblad.