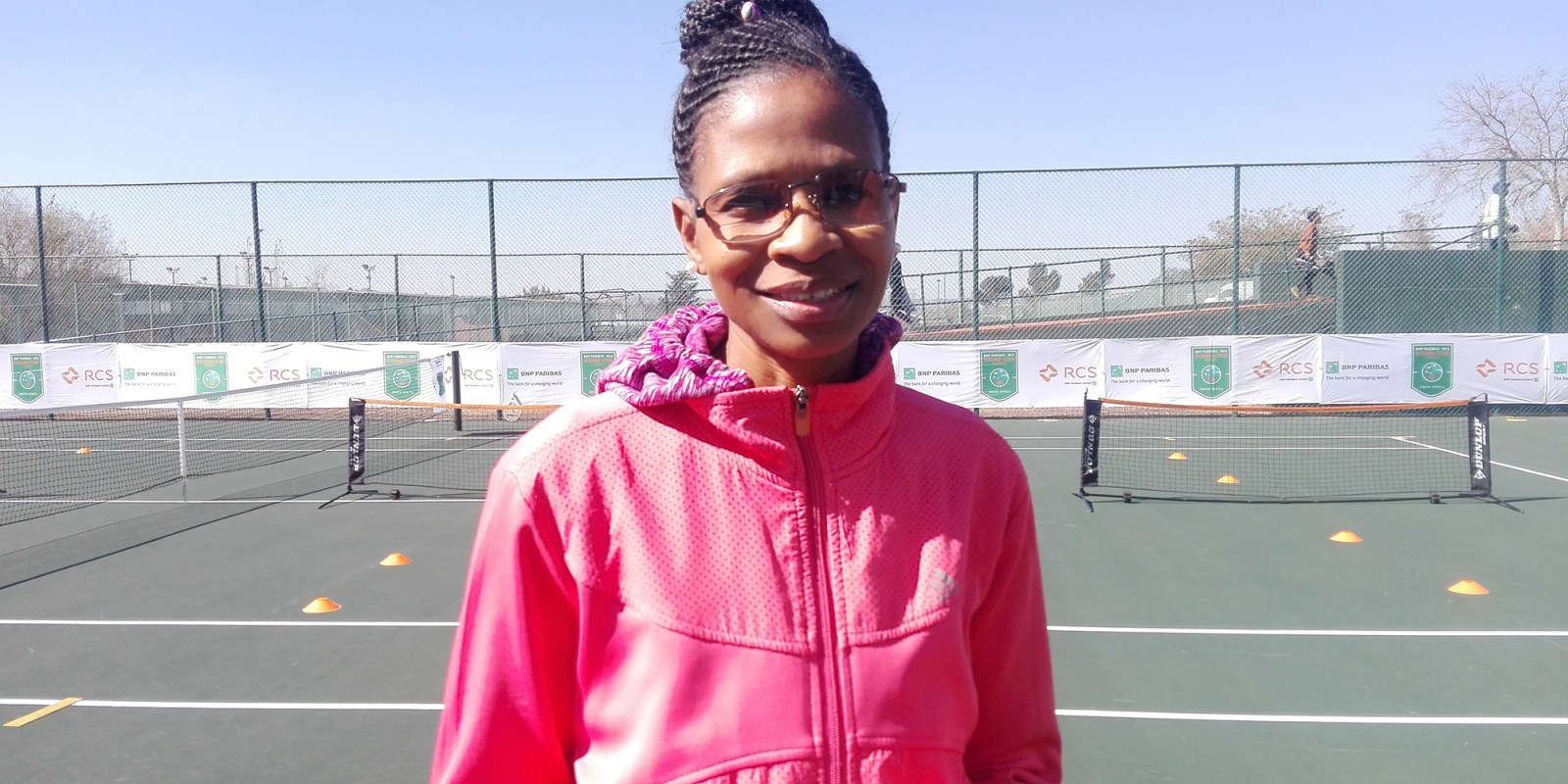 Lindiwe Mochoele, a tennis coach from Mamelodi, Pretoria who is a beneficiary of the partnership between BNP Paribas and Tennis South Africa, poses for a photo at the Arthur Ashe Tennis Centre on 23 July 2019. (Photo: Yanga Sibembe)

Tennis South Africa made a landmark announcement on Tuesday 23 July which bodes well for transformation and development in the sport and sets a precedent for other sporting codes as well as the private sector to follow.

Primary school tennis players will soon have their own national championships to compete in.

On Tuesday, 23 July 2019, Tennis South Africa (TSA), the governing body for the sport in the country, made the landmark announcement at the Arthur Ashe Tennis Centre in Jabavu, Soweto.

At an event hosted by veteran sportscaster Carol Tshabalala, TSA announced it has partnered with resident international tennis sponsor, BNP Paribas, as well as the RSC Group to launch the National Primary School Championships (Rising Star), an initiative to address issues of access and to break down the walls of exclusivity in the sport.

Richard Glover, the CEO of TSA, said this initiative was aimed at rectifying the fact that they had not focused enough attention on developing tennis at the grassroots level.

“We haven’t necessarily done enough to drive schools’ tennis, schools’ sport… This is just phase one, there will be more announcements in future relating to this initiative.”

This partnership comes just days after the Minister of Sport, Arts and Culture, Nathi Mthethwa, implored the private sector to help fund and redress the lack of equity in South African sport.

Jacques Michel, BNP Paribas’s head of Middle East and Africa, said the aim of the programme was to tackle lack of equity.

“The aim of this is equality and inclusion. There are some barriers – social and economic – that prevent certain people from participation. The aim is to give access to those demographics.”

The timing of the announcement could not have been better.

South Africa’s number two in world tennis, Lloyd Harris, recently moved up three places to a career-high 82nd in the latest ATP men’s singles rankings, while wheelchair tennis ace Lucas Sithole on Saturday 20 June won the Swiss Open men’s singles title, and Kgothatso Montjane was victorious in the women’s doubles final of the same event. Cape Town-based Raven Klaasen and his New Zealand partner Michael Venus made it to the men’s doubles semi-final at Wimbledon earlier in July. They were beaten by the eventual champions, the Colombians Robert Farah and Juan Sebastian, who are coached by South African Jeff Coetzee.

TSA announced that world number 11 Kevin Anderson will be the ambassador of the programme. Speaking via a pre-recorded video, Anderson said he was excited to be a part of this initiative, adding that “developing tennis at a young age is important for the future of the sport in the country”.

The Rising Star programme is just another building block for transformation within the sport between BNP Paribas and TSA.

Last year they launched a programme to equip black South Africans, particularly black women, with coaching licences and skills to not only open previously locked doors, but also to impart knowledge about the sport in their communities. There were 45 recruits (44% of whom were women) last year, and one of the those who benefitted from the programme was at Arthur Ashe.

Lindiwe Mochoele, a 51-year-old coach from Pretoria, said she wishes many more black women could be in her position so that they too can tell stories to inspire those who come after them.

Mochoele was born and bred in Mamelodi and is the second of 10 children who were raised by a single mother. She told Daily Maverick she’s always been a sporty individual, playing netball and participating in athletics while at school. She says she fell in love with tennis through watching it on television and started teaching herself by hitting a ball against a wall at home.

“I started coaching and playing at 25 years. Since I was so in love with the sport, I wanted an avenue where even as a 90-year-old I’d still be involved, and that avenue was coaching.”

Mochoele says she hopes to one day coach a child discovered through the Rising Star programme to a Grand Slam victory.

Acting Member of the Mayoral Committee (MMC) for Community Development in the City of Johannesburg, Ntombi Khumalo, lauded the venture.

“This is a win for sports in South Africa and a win for all of us – especially with the targeting of schools from previously disadvantaged communities to bring to them this previously exclusive sport. This is important because sport is a transformative and socially cohesive power,” Khumalo said.

Nomalungelo Mooi, an educator from Usindiso Primary School in Zondi, Soweto told Daily Maverick she was excited by this announcement as it would expose children from the townships to what was previously seen as an elite sport.

The tournament will take this format and is set to commence in August, culminating with a national final in early 2020. DM