School sport and sporting recreation to benefit from Mthethwa’s budget 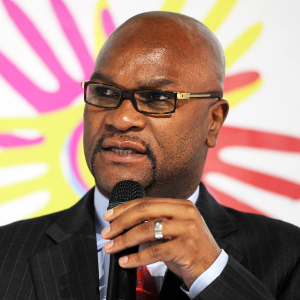 Minister Nathi Mthethwa officially gave notice of his intention for the government to take over the running of Cricket South Africa. (Photo by Gallo Images / Daily Sun / Jabu Kumalo)

Nathi Mthethwa, Minister of Sports, Arts and Culture announced that R1.154bn of his department’s budget will go to the sports portfolio, with a substantial amount (40% of the department’s grant to provinces) going to the School’s Sports Programme. The minister also stressed the need for more sporting and recreational infrastructure.

Minister of Sports, Arts and Culture presented on Wednesday the budget for the sports half of his department in Parliament. The departments were merged by President Cyril Ramaphosa when he announced his Cabinet post-elections.

In his address, Mthethwa highlighted the need to cultivate South African sports at grass roots level, the need to invest and to continue championing women’s participation in sports. He also announced that a Football Indaba to try and diagnose the issues plaguing the country’s most popular sporting code would be held.

The minister said the total budget for the financial year 2019/20 for Sport and Recreation is R1.154-billion. Of this, R744-million will be allocated to mass participation sport and recreation activities, R620-million will be transferred to provincial departments by way of grants to support sport and recreation delivery in the provinces, with R239-million being allocated specifically for school sport. Various sport federations will collectively receive R109-million.

Mthethwa was at pains to point out that the key to making sure the various sporting codes in the country prosper is the availability of infrastructure, which goes hand-in-hand with grass roots development. Speaking at a media briefing post his presentation in Parliament the minister said: “if we are going to be a winning nation, with winning national teams, we should have strong grass roots programmes”.

As part of these programmes, the department has the National Sport Facilities Plan in place, which was launched by former minister of sports, Fikile Mbalula. Mthethwa said work has been continuing to ensure that the facilities are provided, adding that an amount of R263-million has been ring-fenced for the current municipal financial year towards the programme with intent to roll-out outdoor gyms, multi-purpose sport courts and children’s playgrounds.

Furthermore, the department said it will spend over R80-million to build phase one of a world-class sports academy, which will be known as National Training and Olympic Preparatory Centre. It will be built in phases over several years and will be located in Manguang.

Mthethwa stated that such “facilities are not only platforms of talent identification and development for participation in competitive sport and active recreation, but they also serve as social spaces for interaction, integration and socialisation amongst different races and classes in our communities, and therefore promote creation of a cohesive society envisaged by the National Development Plan”.

The minister also highlighted the need to continue lobbying for equity in sport, specifically with regards to women and their participation at various levels in sports.

“As our focus on women in sport continues, this has to be an area that is regularly assessed and monitored. There are so many impediments to women’s participation in sport… we have a responsibility to create an enabling environment for women’s participation in sport to thrive. Despite more women than ever playing sport and working in sport structures, gender inequalities continue to exist in participation opportunities, support for athletes, and jobs for women as well as generally in the administration of sport,” said Mthethwa.

He used Banyana Banyana as a prime example of the challenges that face women’s sport, saying even though a women’s professional league is in the works, and government has pledged R15-million to its inception, a conversation he had with South African Football Association president – Danny Jordaan revealed that at least double that amount is needed to establish the league. The minister added that Jordaan had told him that they will need a further R120-million for the everyday running of the league. As such, the minister implored corporates to buy into women’s sport as government simply could not do it alone.

Mthethwa lauded the national netball team currently competing in the Netball World Cup in England, saying they have a massive chance of winning the world cup, even though most of the players in the team are part-timers; this as there is no national netball league in the country.

The indaba will seek to unpack:

•      What is holding the growth of football in SA country back;

•      The role that various stakeholders with a vested interested should play; and

•      How best we can support the development of football at grass roots level and at professional level to not only conquer Africa, but the world as well.

Mthethwa said the hope for the indaba is for it to address the systematic problems that plague football in the country, pointing out the fact that the senior national men’s team has had 16 coaches in 20 years. He said this was a clear indication that something was not right. DM