The dangers of newsrooms downplaying the climate crisis in daily reporting 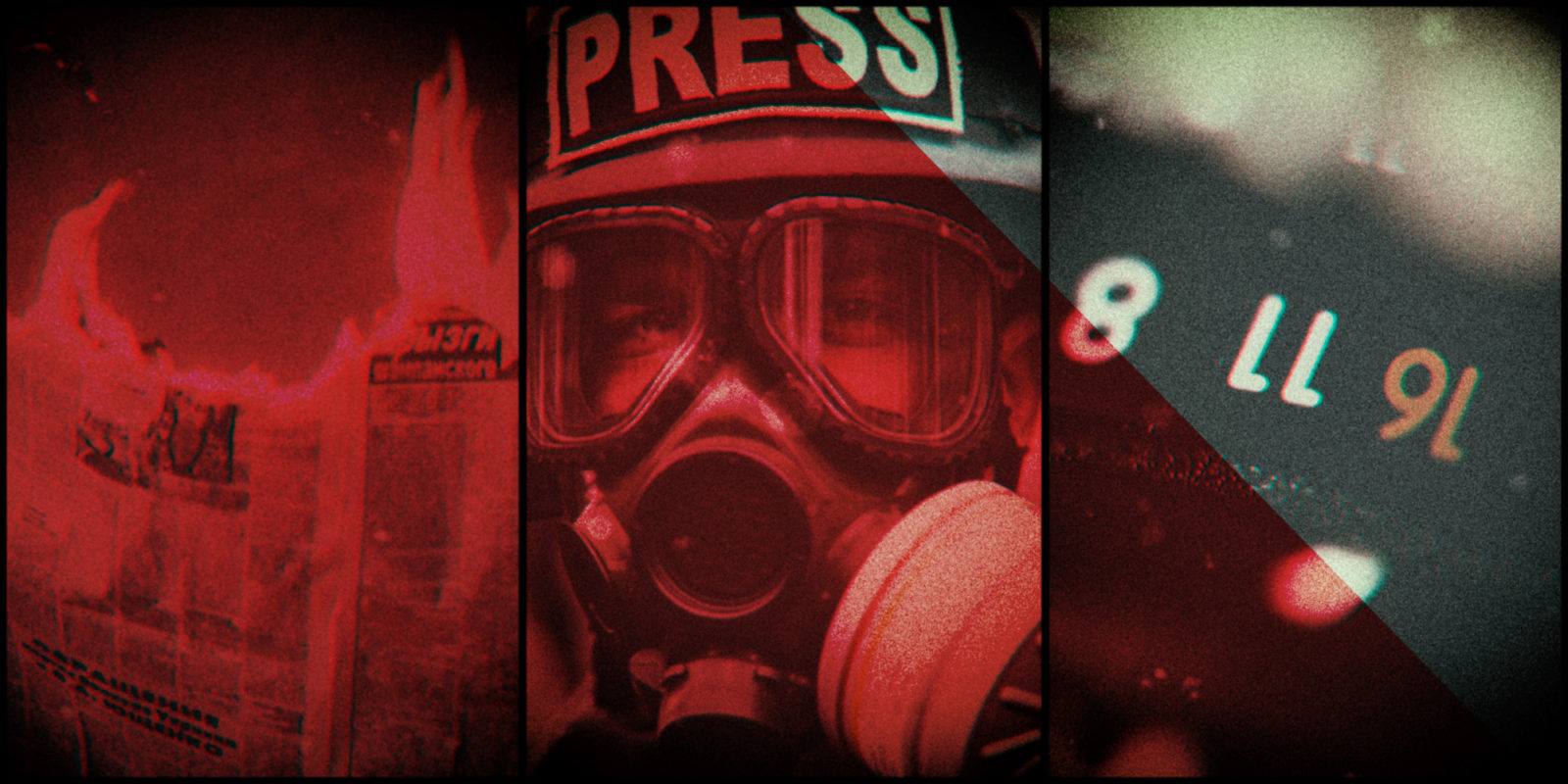 Most journalism still doesn’t join the dots between our current economic model which externalises the costs of carbon pollution, with the extreme weather events devastating communities and ecosystems around the world, says the writer. (Image sources: maxpixel.net / Chuttersnap / Unsplash / Nijwam Swargiary / Unsplash)

Downplaying the severity of climate collapse is the new face of climate denial. How should newsrooms grapple with the principle of ‘balance’ when it comes to reporting on this complex science-based issue? Ignoring the full costs of dumping greenhouse gas pollution into the atmospheric ‘landfill’ is like ignoring the true cost to society when reporting during the apartheid era.

The story broke in 2013: ‘Dark Money’ funds climate change denial effort, read the Scientific American headline, reporting on a study published in a leading academic journal which tracked how the climate denial movement was being funded by pro-fossil fuel lobbyists. It showed how the vested interests of fossil fuel companies seeped through into the wider social dialogue about climate change, deliberately creating false doubt in the public mind about the growing scientific consensus on the impact of greenhouse gas emissions on the ocean-atmosphere system. This fuelled decades of political and industry inaction to throttle back on emissions production or question the economic system driving it.

The result: We’re decades behind the curve, in terms of how much we should already have reduced global emissions to avoid climate change, and now we’re facing a planetary emergency that may be beyond our control.

News media is one of the main platforms that spread views and inform political and societal positions on matters as grave as climate breakdown.

These days, you’re unlikely to find a newspaper article penned by an environmental reporter that will “balance” a climate change story with a dissenting view that challenges the central issue in the story. But climate distraction may still slip into a newspaper in other subtle ways. The editor might give space for a wider range of positions on the matter, in the interests of giving what they see as “balance” or allowing a diversity of views. The letters pages or Op-Ed sections of the paper might give space to industry opinionistas with a perspective that poo-poos the climate “hype” coming from the scientists, for instance.

How should newsrooms juggle their responsibilities as the Fourth Estate, a load-bearing wall in any healthy democratic society, when it comes to reporting on climate issues? How should they position themselves when reporting on the economic system that is driving climate collapse and ecological breakdown that’s threatening all life on the planet?

Every newsroom, news editor and journalist takes a position. The notion that journalism is entirely neutral and objective is a quaint and honourable ideal, but one that even a Journalism 101 debate can quickly unpick.

Journalism is guided by principles of balance, fairness, and commitment to accuracy in reporting, based on traceable and authoritative evidence. It needs to give a diversity of views. It is also guided by another cardinal principle: What’s the harm of publishing a story? This notion of harm doesn’t just apply to an individual who may be exposed in the story. There’s also the question of the potential harm to our wider society or communities when newsrooms publish a story, idea, or perspective.

Based on these guiding principles, editors make daily newsroom decisions. But every newsroom also ultimately takes an ideological position. The editorial page is where you’ll see a newspaper’s deliberate position laid most bare. This ideological position will feed through into the daily newsroom decisions about what hard news stories to run, what angles to take, and what opinions to give airtime.

Newsroom reporting during the apartheid years

In the 1980s, left-leaning press like the Vrye Weekblad and Weekly Mail – today’s Mail & Guardian – took a strong position in their reporting on the apartheid government. This was based on their ideological position and a value system which recognised how corrupt the system was, and the gross abuse of human rights meted out by that state.

Let’s say, hypothetically, that one of these title’s business editors had taken a position that apartheid was good for the South African economy, even if they understood that the system was immoral and undemocratic. Do you think the newsroom editorial chiefs would have agreed to this, even if the business editor made the case that this angle brought balance and a diversity of views?

You can only argue that apartheid was good for the country’s economy if you narrowed your lens to single out the benefits for the ruling party, big business, and the white minority. (Any argument that there would have been a trickle-down benefit to the excluded poor masses is easily blasted out the water.)

Taking this angle would mean ignoring the economic costs of the apartheid system for the majority in the country. This cost would have been measured not just in the direct economic exclusion of black South Africans who earned cripplingly poor wages and didn’t have a fair chance to find decent work or some other source of livelihood.

The costs were also counted in the growing inequality between the wealthy, educated, capital-accumulating classes and those trapped in the wage-labour strata of society, where the former had an unequal say in who governed the country at the expense of the latter. The costs were embedded in a system that was structured to deny most South Africans access to decent healthcare and education. It was in the costs to communities living in unserviced suburbs and squalid informal settlements where they didn’t have clean running water and adequate sewage or garbage removal. It was hidden in the “tax” on the poor who didn’t have access to safe, affordable, reliable public transport so they could move between home and work easily. It was hidden in the high crime rates in neighbourhoods where police stations are grossly under-staffed, and where the judicial system was skewed against them.

It was counted in the cost for children who may have been left with permanently stunted brains because they didn’t get decent nutrition in their first 1 000 days of life, because parents didn’t earn enough money to buy healthy food even if their neighbourhoods may have been awash with cheap and often nutritionally dead processed and starchy foods (the World Bank estimates that early childhood malnutrition, and the permanent cognitive dulling that comes with it, can reduce a person’s earning potential by about 10% through the course of their lives.)

A journalist would not be reporting fairly and responsibly on the economic benefits of apartheid if she was ignoring all the social, health, and environmental “externalities” of the system for the whole of the country’s citizens.

A newsroom’s business desk running with this lens would not just be flawed in its approach, it would be unethical and inaccurate. And when people were suffering or dying as a result of that system, as they did under apartheid (either in civil violence and at the direct hand of state security apparatus, or through all the repercussions of structural violence of embedded poverty) it would have been outright harmful to publish those views, because they would be reinforcing the very political and economic system that needed to be torn down.

Today we are living in a time of climate collapse, which is driven by an economic system that denies the laws of physics and which assumes we can have infinite growth on a finite planet. The science, spanning decades of careful data gathering, analysis and tested modelling projections, is clear: The emissions trajectory we’re on is destabilising the planet’s climate and is a threat to all of life on Earth. Yet our newsroom decisions still don’t reflect the scale of the problem or question the economic system driving us across a tipping point into runaway climate breakdown.

In spite of the exposé, reported by Scientific American, on the vested interests driving climate denial messages, and the fact that the science is absolutely clear on the causes and extent of climate collapse, the battle against climate denial is not over, and the newsroom’s role in amplifying these messages still hasn’t been put to bed.

The fact that Harvard University’s history of science professor Naomi Oreskes had to bring this subject up again at the World Conference of Science Journalists in Switzerland in the first week of July, proves the point. Journalists evidently still don’t understand the difference between how they report on and balance a political story, compared with a story addressing an issue based on scientific consensus.

“The ‘two sides’ model for reporting on issues makes sense when you’re reporting on a political debate in a two-party political system,” Oreskes told the audience. “It has no place in reporting on science. In science, if a question is unresolved, there may be many theories and perspectives. But when a matter is resolved, then in many cases there is one answer. And that answer is what we conventionally call truth.”

In this case, she argued, “journalists, like scientists, should not seek balance, but accuracy”.

It’s fine to seek out alternative views and interpretation of facts, she said, but reporters should never present propaganda and disinformation as a counterweight to facts or aim to balance a scientist’s evidence-based information with, say, the views of an economist, or lawyer, or politician.

But the issue isn’t just about whether a journalist misunderstands the principle of balance in an individual story. It’s also about what voices the media stables choose to amplify through giving them access to the publishing space, and those they don’t.

At a time when our extractive, profit-driven economic model is driving mass species die-off, gross inequality, and collapsing life support systems, can we justify reporting decisions that don’t question a business-as-usual perspective? Can we justify decisions that create a new form of climate denial – climate distraction – because our editorial decisions need to be based on the guiding principles of balance, fairness, or the responsibility to give diverse views?

Most journalism still doesn’t join the dots between our current economic model which externalises the costs of carbon pollution, with the extreme weather events devastating communities and ecosystems around the world right now. How is this any different to newsrooms in the 1980s ignoring the full cost to the country of the political and economic system put in place under the apartheid regime?

Journalistic decisions which downplay the severity of climate collapse, or which don’t expose the true costs of a business-as-usual economic growth curve, aren’t just ethically problematic or intellectually dishonest. They’re downright harmful. Not just to South Africans, but to all life on this planet, human and non-human alike. DM

Steve Kretzmann for GroundUp • 5 hours ago