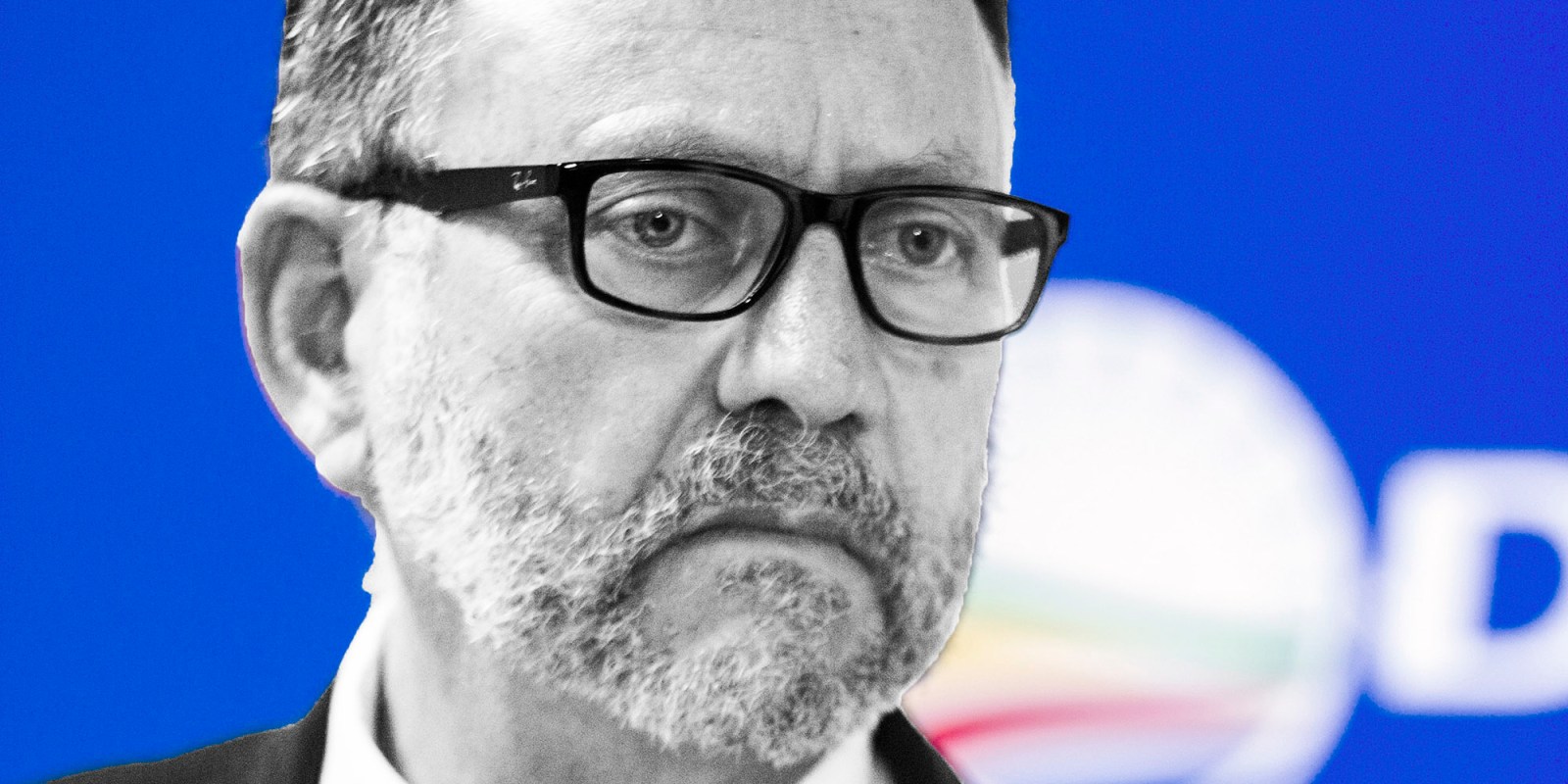 Just out of a bruising seven-month election campaign that saw the Democratic Alliance drop support at the polls for the first time in two decades, South Africa’s largest opposition party now heads into a period of internal contestation. Up for grabs is the powerful job of the federal executive chairperson, effectively the organisational fulcrum, as DA structures are undergoing an internal fit-for-purpose review of systems, structures and policies. The next four months will be crucial in the (re)making of the DA. Or not.

It’s been a grim election result for the DA, which for the first time in more than 20 years dropped its percentage of support. It wasn’t that much in numbers — down to 20.77% in 2019 from 22.23% in 2014 — but this reversal of the upward polling trend was enough to cause deep concern. The DA message of where it governs, it governs best, and its positioning as the political party to unite South Africa failed to gain traction.

In the immediate aftermath of the election results, there was discordance. DA leader Mmusi Maimane individually took “full responsibility”, while DA federal council chairperson Athol Trollip talked of collective responsibility in a move to dispel speculation of a leadership change. But that disjunction played right into the fault lines of factionalised dysfunction and ideological dissonance.

To get everyone on the same page the federal council, the DA’s highest decision and policy-making structure between congresses, was brought forward by a month to the weekend of 8-9 June 2019 — while the intention to conduct an independent organisational review was also announced.

To date two DA top leaders have fallen on their swords: Jonathan Moakes, the national election manager, resigned in May and the federal council of 8-9 June announced longstanding federal executive chairperson James Selfe is out in October.

Some dissatisfaction remains over DA CEO Paul Boughey remaining put — he is also blamed for the drooping electoral performance in some party circles — although in the greater scheme for the DA, his continued tenure has been put on the backburner, for now.

That Selfe is leaving the post he held for some 19 years, just 18 months after being re-elected uncontested at the April 2018 DA national congress, is one indication of the see-sawing and internal dysfunction in which the party finds itself.

In the run-up to the 2018 party congress, efforts were made to persuade Selfe to hand over the baton, according to several party insiders. But the conversations proved unsuccessful. It’s understood that at the time DA chief whip John Steenhuisen had wanted to stand for election as federal executive chairperson, but not against Selfe as he remains widely well-respected as a party elder.

While Steenhuisen may have withdrawn then, it’s understood he’s planning to run for that position now. Two insiders have described him as front-runner, although if a week in politics is a long time, then four months to the next federal council from 19 October is an eternity. Other contestants may well throw their hat into the ring; DA MP Glynis Breytenbach, also the chairperson of the DA legal commission, who is said by some to also be interested in the position, has dismissed this.

“I have been approached to stand and I am consulting and considering it very carefully. I think I have a great deal of experience and energy to offer the position”.

Some in the DA are worried — both contestation for the powerful federal executive chairperson job and the wide-ranging organisational review unfold at the same time over the next four months.

If there are concerns of tumultuous times ahead for the DA, this was downplayed. National DA spokesperson Solly Malatsi said on Wednesday the party had conducted internal elections well — “They are robust, but don’t spiral out of control” — and there would be time for a proper handover and transition.

The organisational review was important to deal with internal issues, including “mismanaging internal bickering”, and to ensure the DA is effectively positioned.

“This is a critical time for the party to unite, refocus,” said Malatsi.

Selfe agreed with that assessment of a robust, but fair contestation for his job that he would hold until October’s federal council. “Our elections are robust.”

Selfe’s new role as head of the DA governance unit was announced on Sunday ahead of the review of systems, structures and policies. That position is multi-layered — offering technical support to the various DA governments, but also political guidance and effective official communication with residents under DA governments.

“I have sufficient heft to knock heads together (to get things done),” said Selfe, also confirming he would remain the DA’s point person on its various legal challenges on issues of governance.

The review is chaired by political strategist Ryan Coetzee, who worked closely with former DA leader Tony Leon to establish the party in June 2000, followed by a stint as DA MP between 2004 and 2008 and DA CEO before leaving for the UK.

According to Sunday’s post-federal council statement, the review would probe underlying factors in the DA’s election performance, the capacity of leaders and public representatives and organisational structures and processes alongside the DA policy platform and political identity.

Coetzee’s appointment to head it was widely welcomed by the federal council, according to someone with knowledge of the meeting. The other members of the independent review panel are yet to be appointed.

For now, the DA is facing uphill on various fronts, including an at-best lukewarm reception for its so-called shadow cabinet where men, and white male MPs in particular, seem to dominate.

And neither is the ideological contestation in the DA’s broad church of liberalism settled. While pro-free-market, libertarian-inclined Gwen Ngwenya ultimately declined to take up her parliamentary seat — she had resigned as policy honcho, it emerged just months before the 2019 elections — that ideological streak remains present in a disruptive minority.

The tensions remain and are often brought sharply to the fore when it comes to black economic empowerment — the DA doesn’t believe in quotas — and race, on which the DA remains conflicted even if in its policy handbook race is a proxy for disadvantage. Tensions have led to compromises such as “constitutional blacks”, for which the DA has been derided and which feeds into the still-prevalent criticism that the party represents white interests.

That the DA is at a crossroads is widely understood within the party. Delivering Sunday’s federal council statement after its two-day pow-wow, Maimane said the DA would “unashamedly” position itself to grow the political centre away from “racial mobilisation or populism”, as he put it.

“For that reason, this party has no other option but to emerge from this blow stronger than before. We must pick ourselves up, dust ourselves off, make the necessary changes and keep fighting.”

The wide-ranging organisational review is meant to help resolve such dilemmas with its report and recommendations. Its findings are due at the next federal council from 19 October, when the DA will also appoint a new incumbent for its powerful federal executive chairperson’s post.

The review’s objective was to help build “a constitutional liberal democratic alternative to the ANC”, according to Sunday’s federal council statement.

What exactly that means is set to emerge over the next four months — and depending on how the DA decides to act, it could mean a new lease of life. Or not. DM