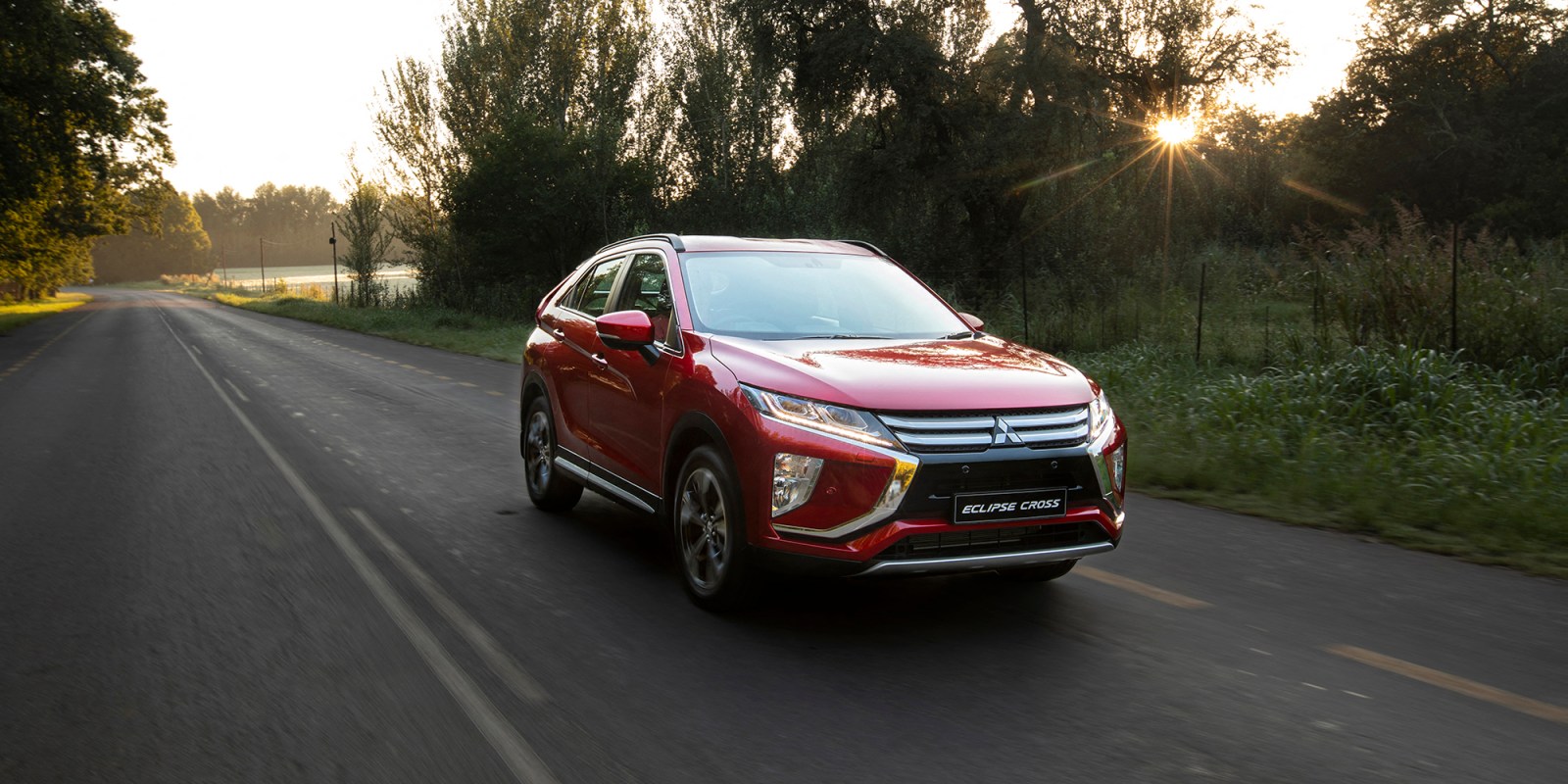 By definition, sports utility vehicles look much the same. But as the new Mitsubishi Eclipse Cross proves, there is still scope for individuality. Is that enough to attract a soft-roader audience spoilt for choice?

When I think of Mitsubishi, two models come to mind: the ageing but iconic Pajero, and the now defunct, rally-honed Lancer Evo.

The Pajero once took me to the Serengeti plains and the mystical Ngorongoro crater over some of Africa’s roughest roads. And the rally-focused Evo remains one of the most exciting all-wheel drive performance sedans I’ve ever driven.

By comparison, the new Eclipse Cross is an altogether different proposition. Although it’s available in front-wheel drive (as tested here) and all-wheel-drive versions, it’s very much a soft-roader that’s more at home in the urban jungle than in the rough stuff. 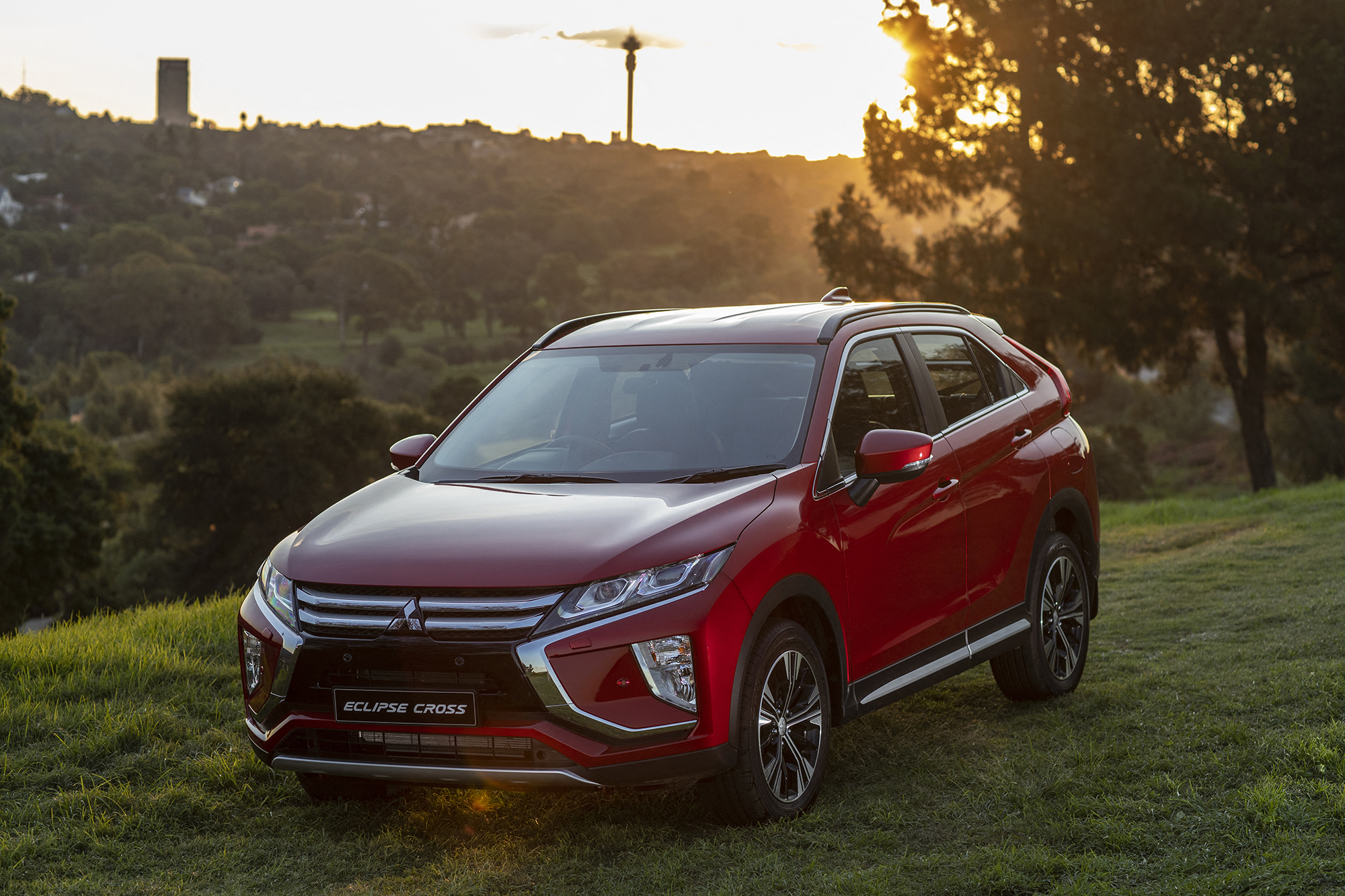 Don’t expect any Evo-style performance, either: the Eclipse has a pragmatically configured drivetrain that combines a normally aspirated engine with a Continuously Variable Transmission (CVT) in the interests of convenience and economy.

Perhaps the biggest surprise is the styling, which is head-turning by the SUV segment’s usually generic and conservative standards. The Mitsubishi, dare I say it, eclipses the competition in this department.

Whether you like it or not is a matter of personal taste, but it does endow the Eclipse Cross with a welcome dash of individuality. 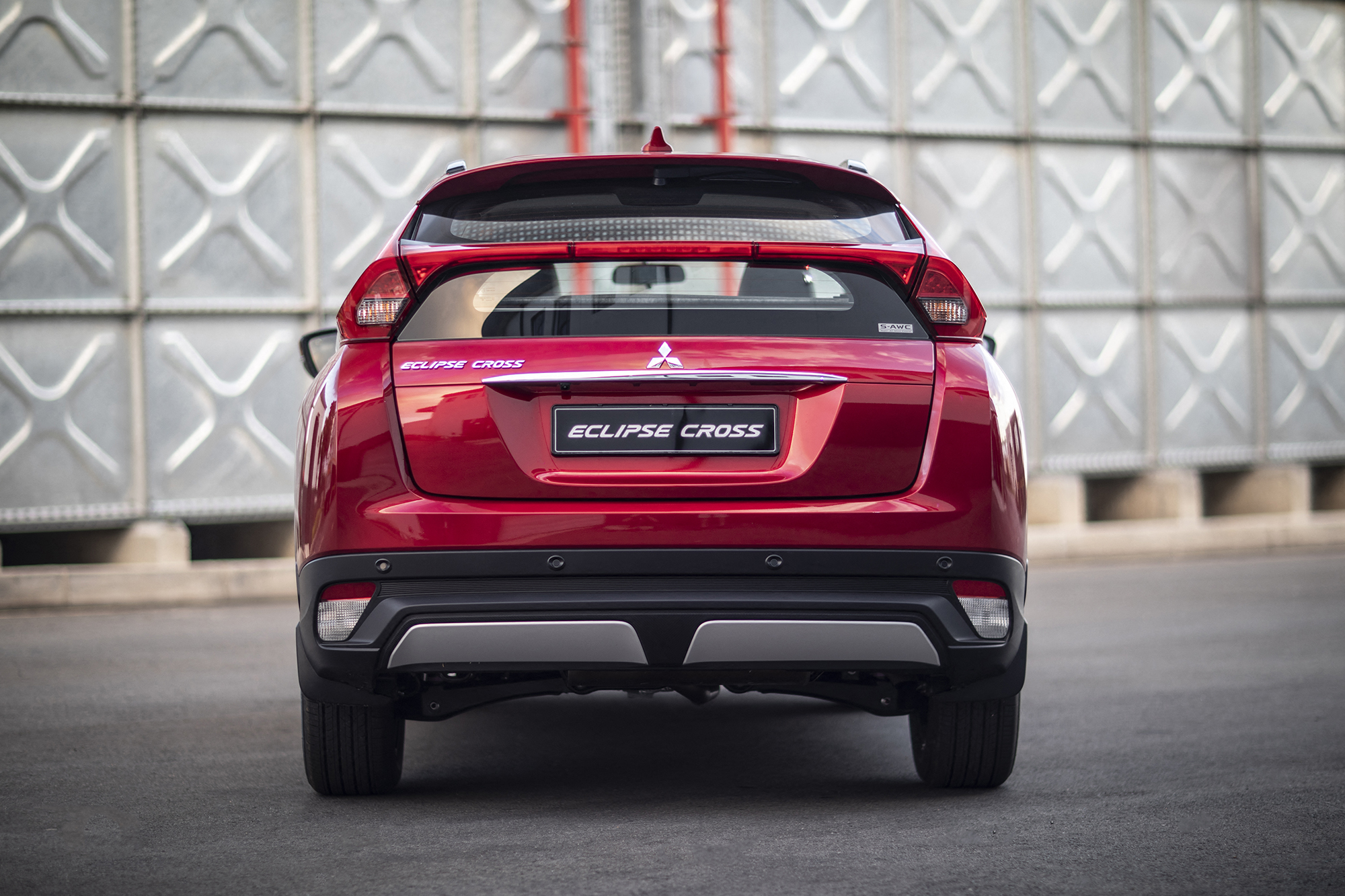 That individuality is most apparent when viewing this compact SUV from the rear: the usually bland tailgate is replaced by an altogether more adventurous design that dissects the rear screen with a pronounced ridge linking the tall, high-mounted tail light clusters.

The remainder of the rump is unusually rounded, while a two-piece scuff plate incorporated into the rear bumper serves as a visual reminder of the vehicle’s SUV intentions. That said, there also a rooftop spoiler to add a sporty touch.

The inverted wedge of the tail light clusters is continued in the pronounced crease of the shoulder line, while the boldly shaped wheel arches add a measure of attitude and visual muscle. The wheels are 18-inch alloys. 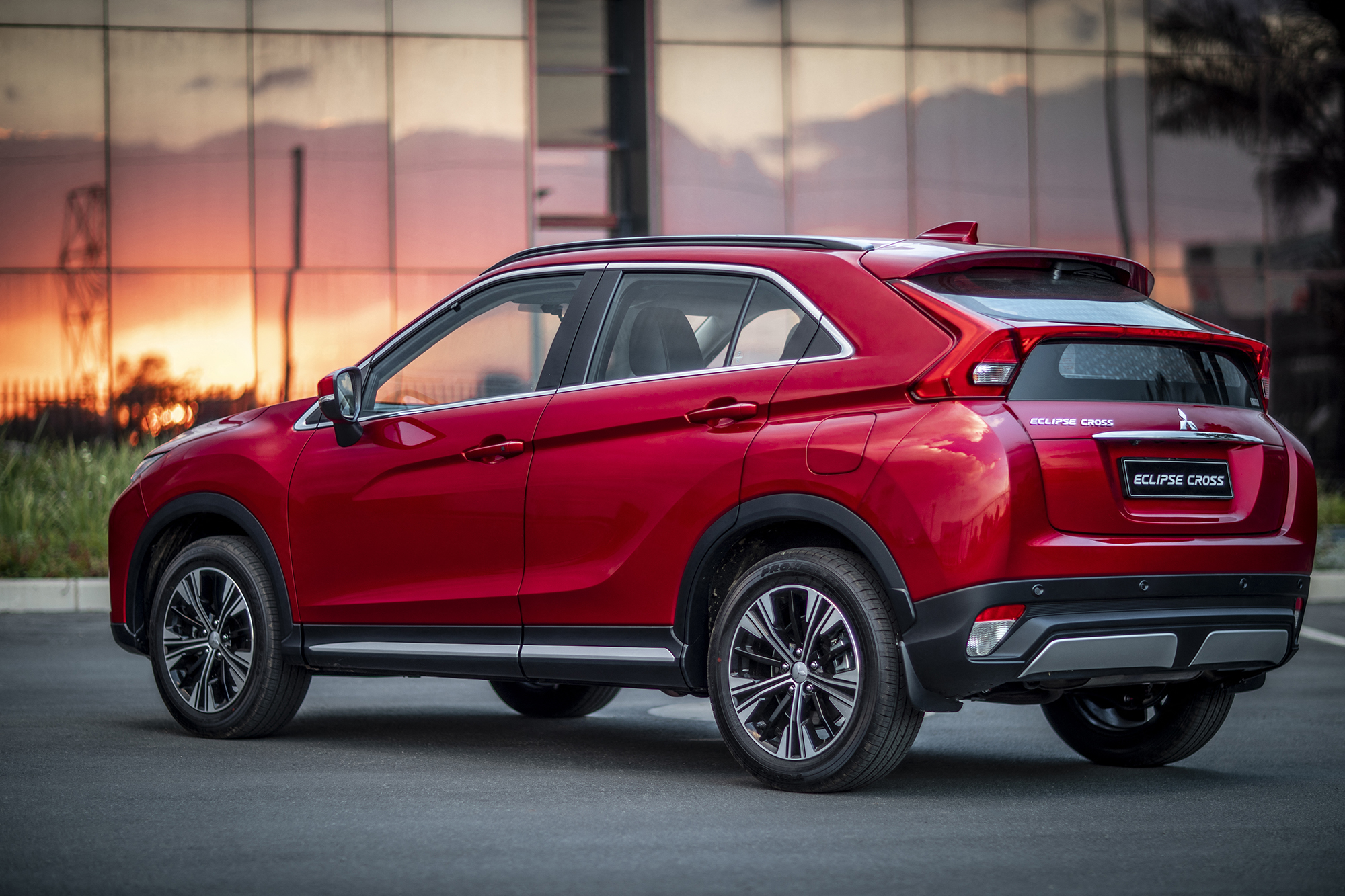 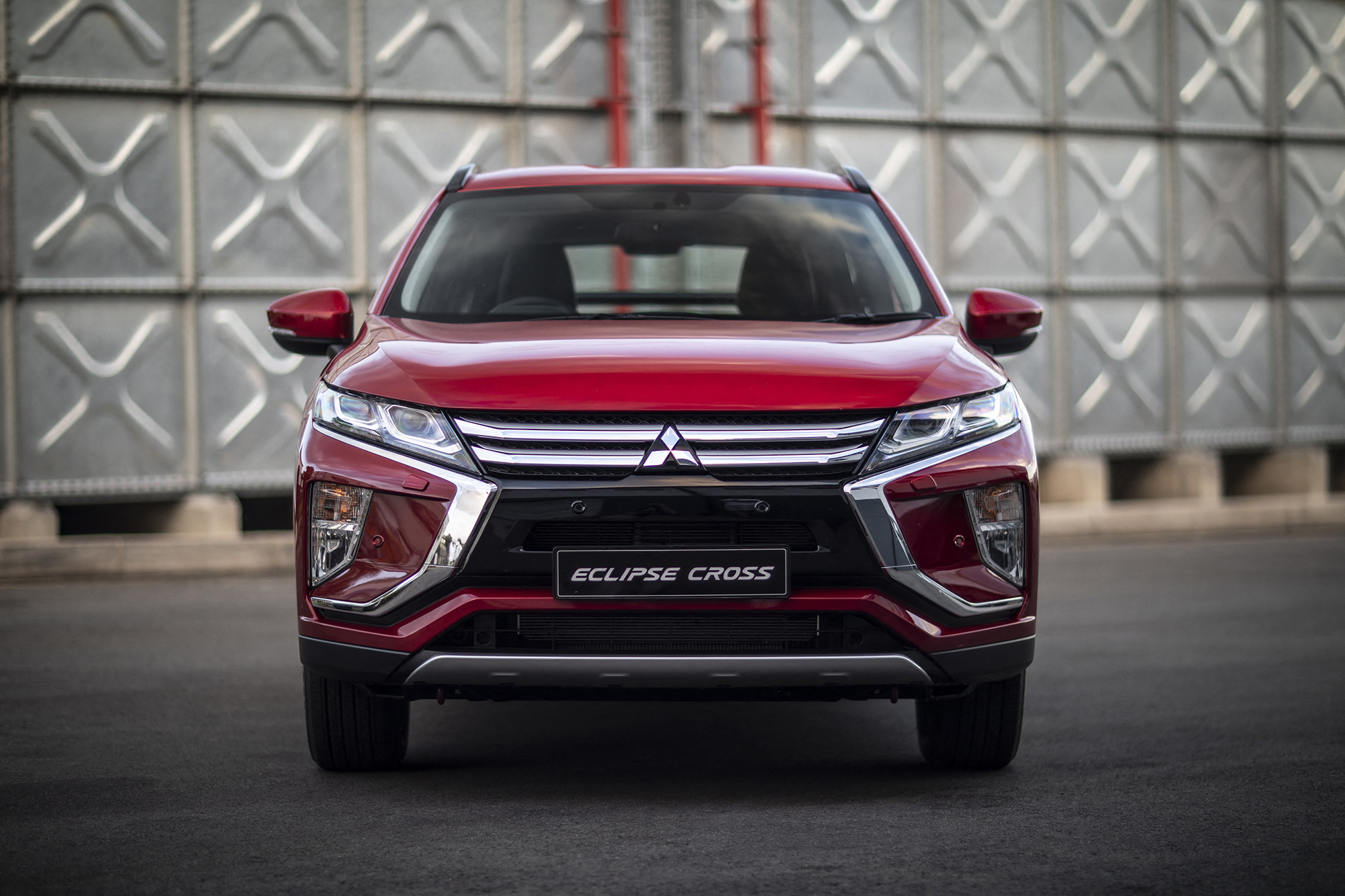 In footprint terms, the Eclipse Cross is at the more compact end of this segment, measuring just 4.4m long and 1.8m wide, while standing 1.69m tall. Even so, it manages to offer generous interior space.

The cabin is smartly appointed, with leather upholstery for the comfortably shaped front buckets, and the 60:40 split rear bench seat. Rear passengers get ample legroom, too – but the downside is a boot that, at 378 litres, is sub-par for the segment.

The good news is that the rear bench can be adjusted fore and aft, allowing one to find an optimum compromise between luggage space and legroom. That way, cargo space can grow to a much more respectable 485 litres. Fold the rear seat backrest down, and the result is an even more useful 1,158 litres. 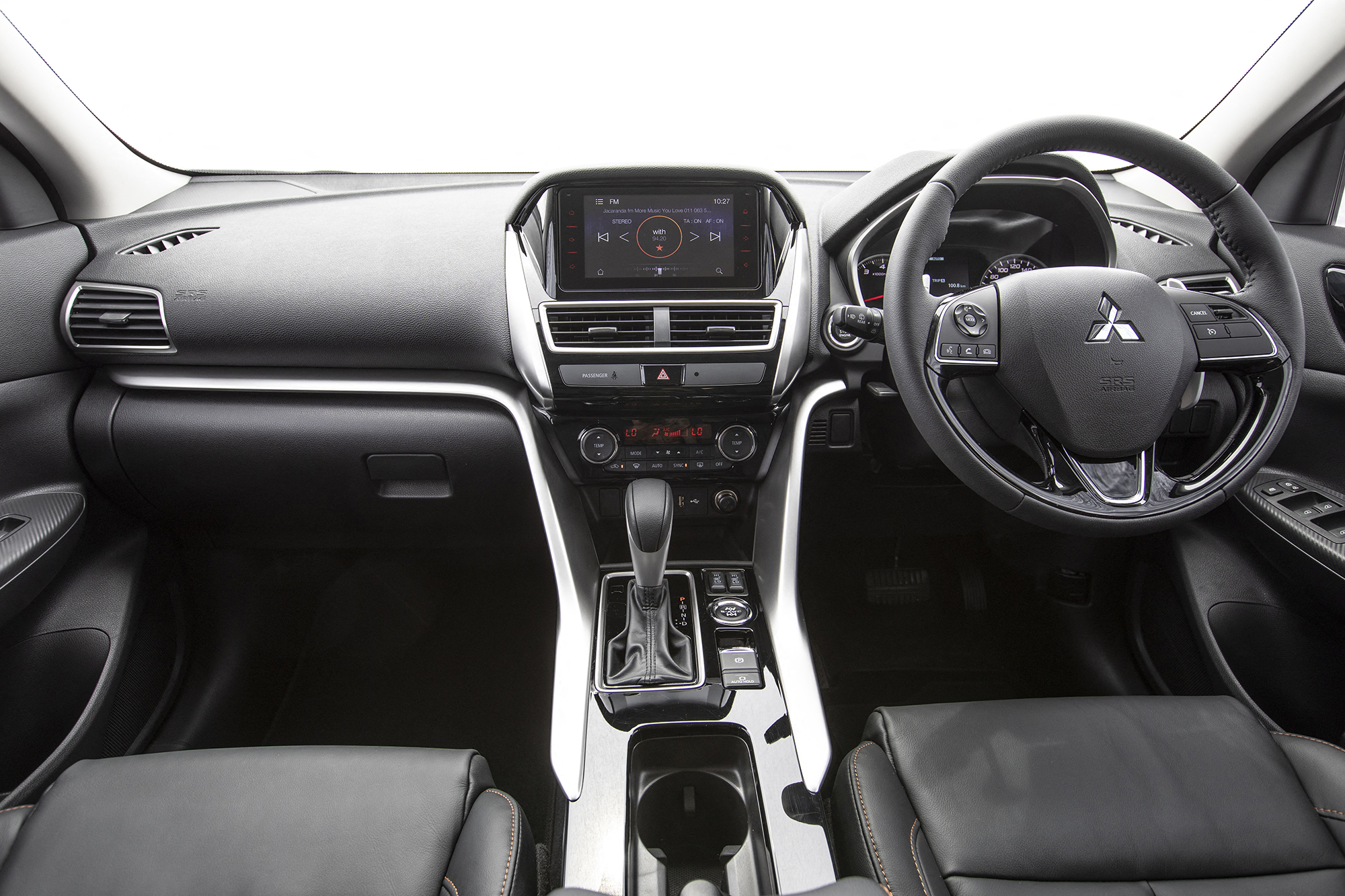 There’s nothing overtly posh about the cabin, but don’t be fooled: it has most of the key bells and whistles. Perhaps more importantly, the look and feel is one of robust quality, promising reassuring longevity.

A deeply recessed binnacle with analogue instruments is framed by a multifunction steering wheel, while – less usual for this sector – a head-up display appears directly ahead on switch-on. It sounds gimmicky, but actually works well in practice.

The pronounced centre stack is home to a touchscreen, but in standard trim, it only serves as the interface for the sound system. An optional upgrade turns it into a full-scale infotainment system, complete with satnav, voice control and Apple CarPlay/Android Auto. 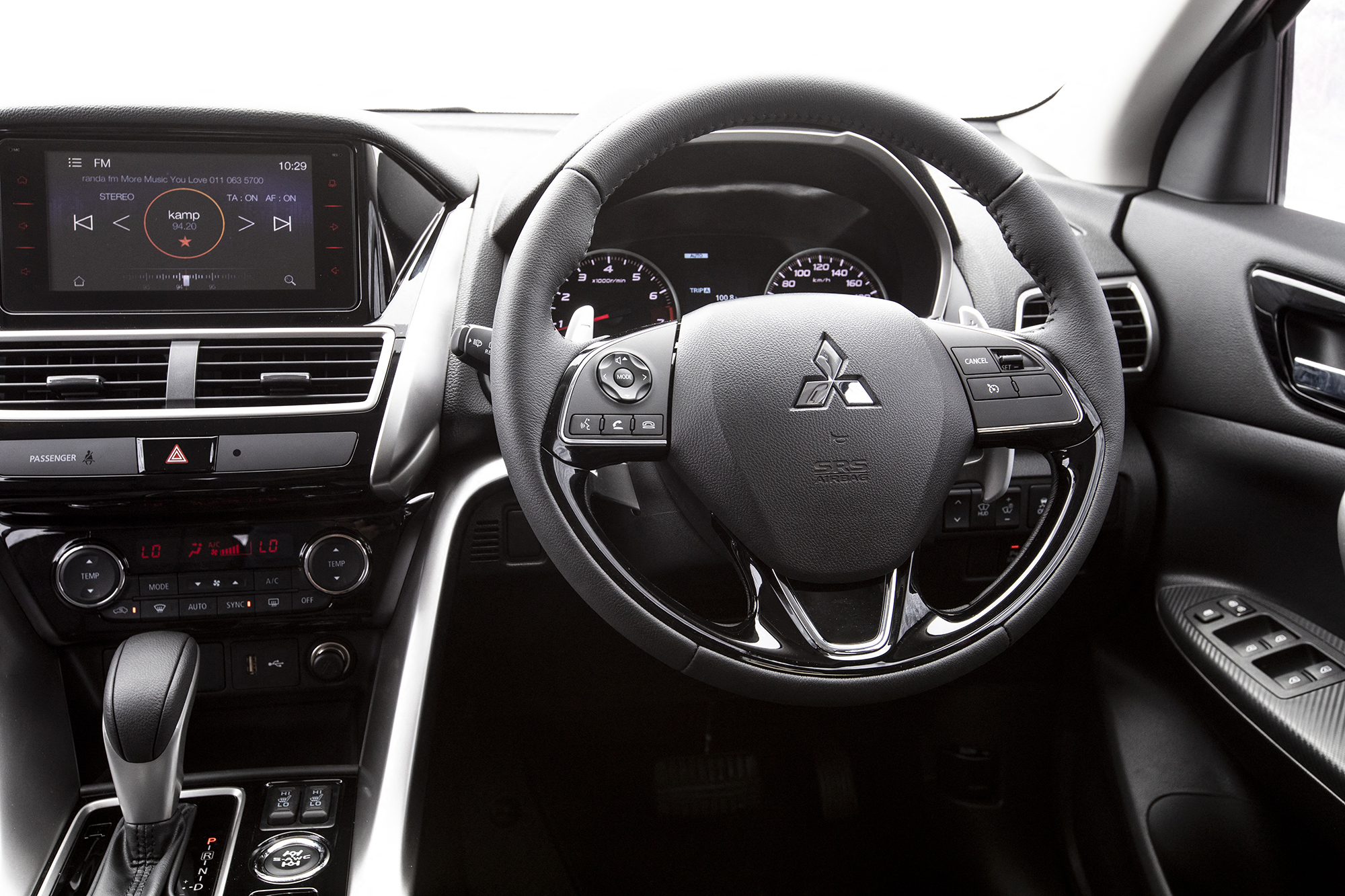 Given the Mitsubishi’s high-tech appearance, I was disappointed by the presence of halogen headlights: LED headlights are just so much brighter and more focused, and by comparison, halogens are a let-down. 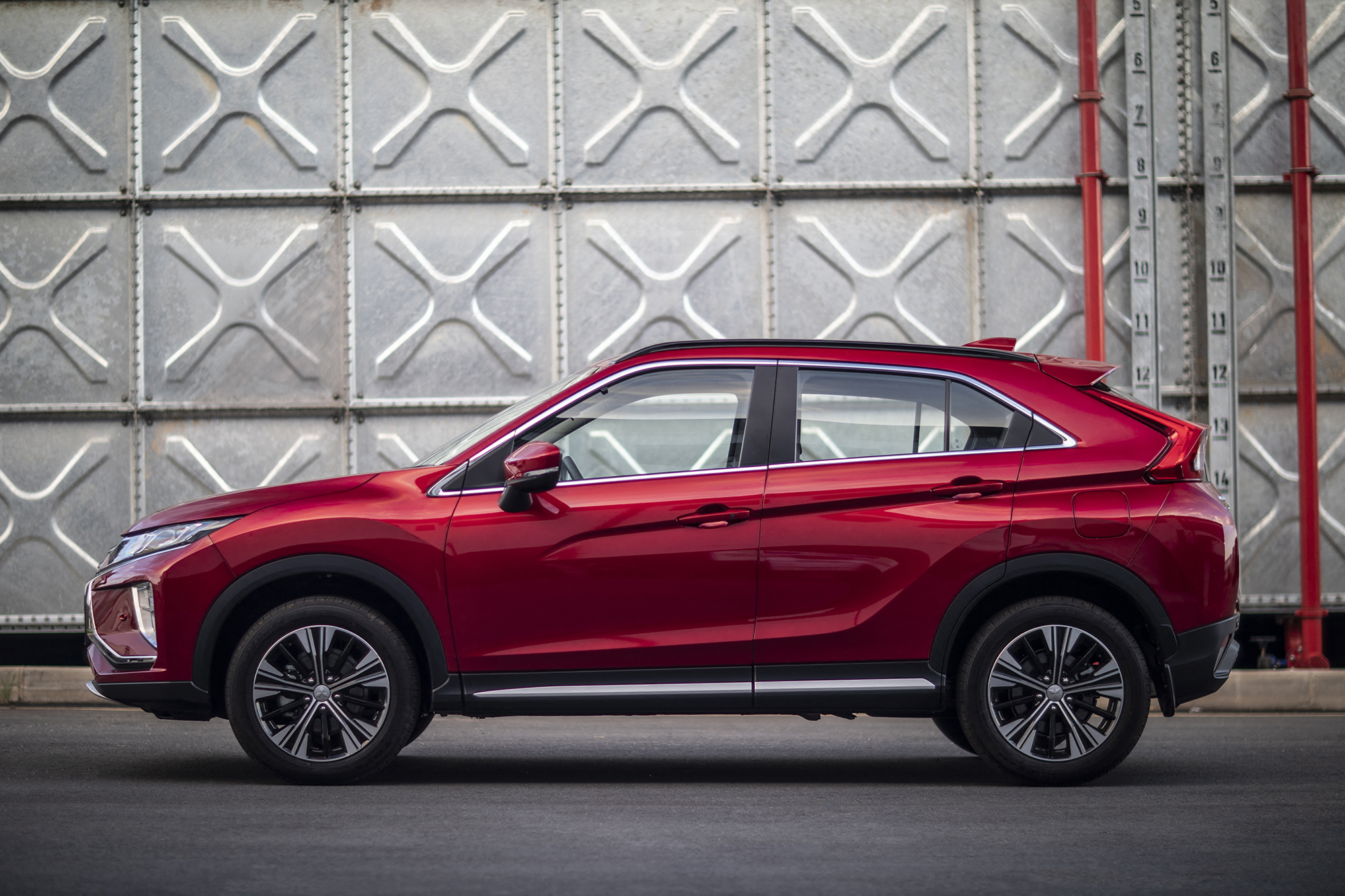 The Eclipse Cross gets its urge from a 2.0-litre four-cylinder petrol engine that spins eagerly enough, but won’t set the world alight in performance terms – especially at altitude. It wants to be revved to show off its best, with maximum muscle only reached at 6,000rpm.

The CVT gearbox is better than most, but still not as incisive as, for instance, a decent manual ‘box, or a more conventional auto. It does offer a manual mode with six simulated ‘gears’ though, and shift paddles make the manual selection even more attractive.

For the CVT to work at its unobtrusive best, you don’t want to drive the Eclipse Cross with too much gusto: giving it horns will expose the transmission’s droney shortcomings. If you do want to use the full rev band, manual shifting is the way to go. 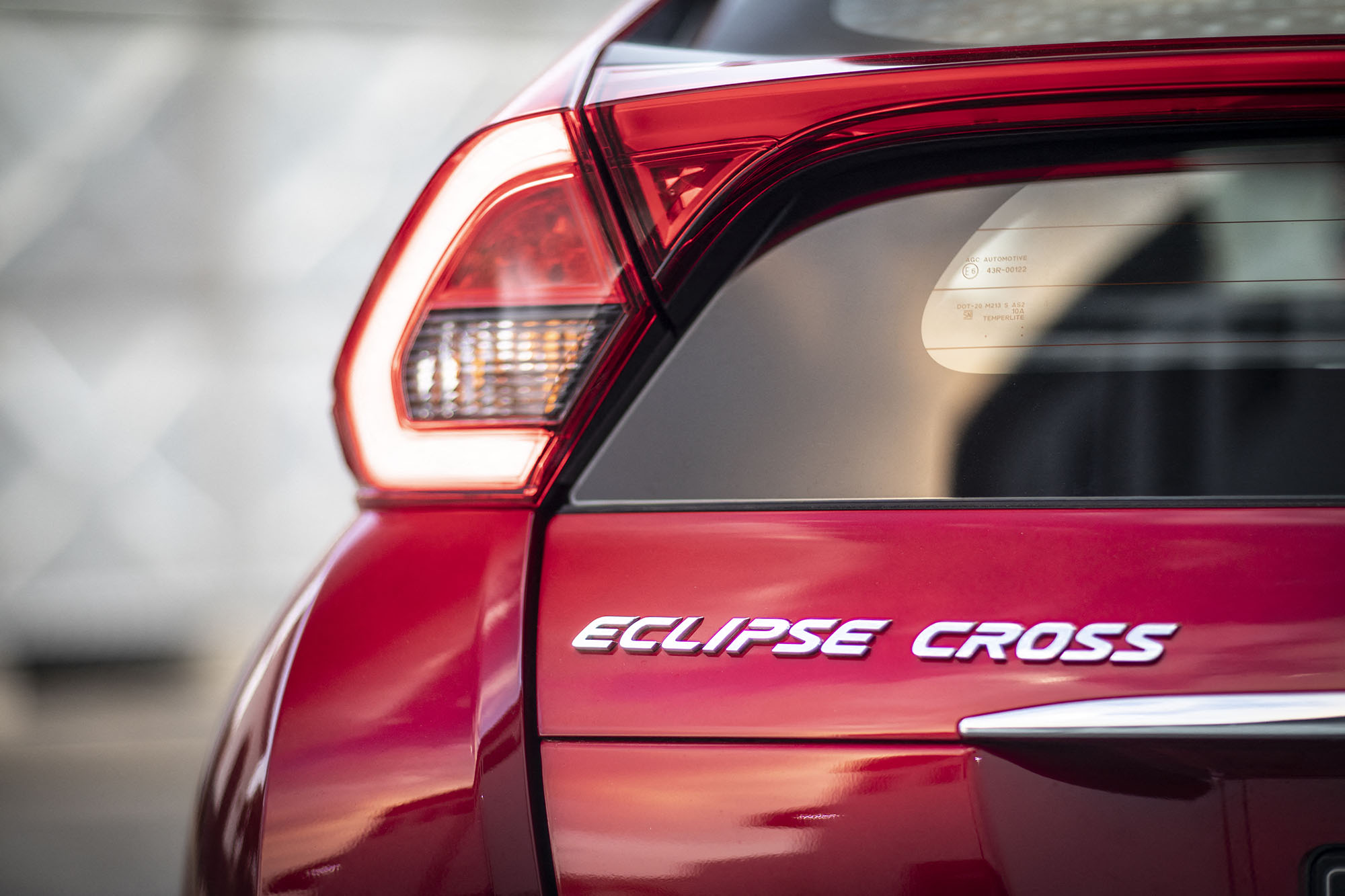 Even then, this is no rocket ship. At Reef altitudes, the engine’s peaky nature is accentuated, with torque only plateauing at 4,000rpm, all of which tends to dull the Mitsubishi’s dynamic sheen.

It’s nippy enough around town though, and will maintain legal-limit cruising speeds with relative ease, depending on how heavily it is loaded.

The Eclipse Cross fares better in the handling and ride department, however. The SUV always feels surefooted and predictable, with light but positive steering, and a nice, flat cornering attitude.

The front-wheel-drive doesn’t get into the way of this composure at all, allowing a mostly neutral approach that will only tend towards understeer if you really plough into a tight corner too enthusiastically.

Ride quality is admirably compliant, which is a boon on our often compromised roads. It also spells good news for traversing gravel, although, with only 180mm of ground clearance, I’d be circumspect of how far off the beaten track I’d venture.

For those keen on spending more time on the dirty stuff, the all-wheel-drive Eclipse Cross may be worthwhile considering. Fitted with Mitsubishi’s Super All-Wheel Control (S-AWC) system, it splits power between the front and rear axles as required, and can also vary the torque between the left and rear wheels.

The downside to opting for all-wheel drive is increased weight and complexity, which compromises straight-line performance and fuel efficiency. It also adds a cool R50,000 to the asking price.

I like the Mitsubishi Eclipse Cross for its adventurous styling, its smartly executed interior, and its comprehensive array of features. It also impresses in the ride and handling department – even when negotiating relatively good gravel surfaces.

The sliding rear bench seat is a deft touch to prioritise either luggage space or legroom, and I was pleased to see the presence of a full-size spare wheel, which should be obligatory on all vehicles, especially when travelling a long distance.

However while adequate, the drive train could do with more poke, especially in the low-to-midrange power band. And as much as Mitsubishi’s take on the CVT is better than most, a good manual gearbox would make it easier to extract the best from the four-cylinder mill.

With the brand’s heritage firmly rooted in authentic off-roaders like the Pajero, and the urge and excitement of the Evo, you’d be forgiven for expecting more of Eclipse Cross. But in soft-roader SUV terms, it meets most of the target market’s requirements, while adding welcome individuality and charisma.

There’s a keen asking price to consider, too, adding value to the Mitsubishi’s mix of attributes. And that combination of talents might just be persuasive enough to lure buyers away from the mainstream offerings in this segment. DM