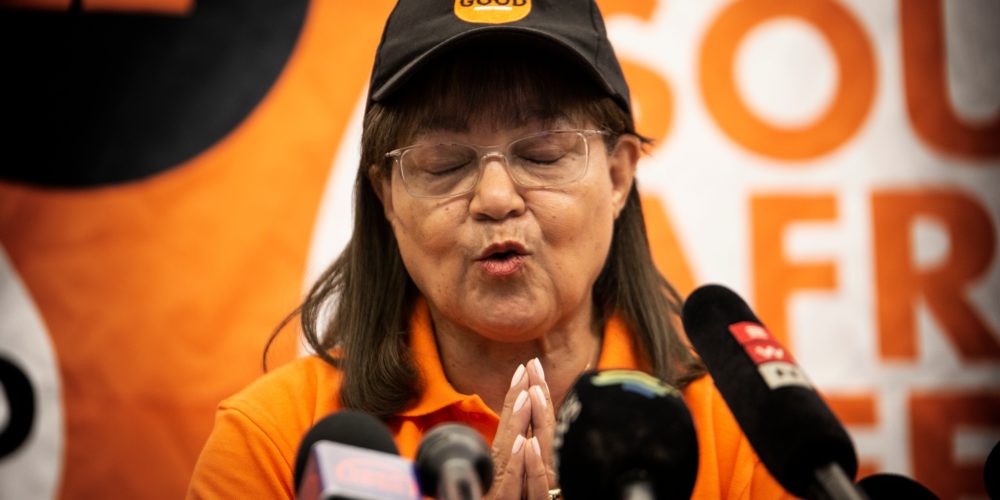 Some analysts predicted that President Cyril Ramaphosa would reach across the political divide and allocate at least one spot in his Cabinet to an opposition politician. But few saw it coming that the opposition politician in question would be Good party leader Patricia de Lille, appointed to head a beefed-up Public Works portfolio. It did not take long for DA leaders to start alleging funny business.

Now, for the first time, she will add “Honourable Minister” to her CV.

When President Cyril Ramaphosa announced his Cabinet on Wednesday night, the greatest surprise among his executive picks was the news that De Lille would be the next Minister of Public Works — or Public Works and Infrastructure, as the portfolio will now be known.

In adding responsibility for infrastructure to the Public Works portfolio, an already significant department has been given greater weight. The Ramaphosa administration has made it clear that infrastructure development will be one of the cornerstones of its economic stimulus programme, with plans for a R400-billion infrastructure fund.

The Department of Public Works, meanwhile, is tasked with overseeing the South African construction and property industries, managing state-owned assets and contributing to job creation through the Public Works programmes.

De Lille, in other words, has not been handed a “soft” position.

So why De Lille for this particular Cabinet post — or, indeed, any?

As Mayor of Cape Town until her acrimonious public divorce from the DA in October 2018, De Lille has certainly had plenty of experience in dealing with the construction and property industries, with Cape Town experiencing a massive construction boom over the past few years of her mayoral tenure in particular.

This private sector growth has not been uncontroversial, with a resulting spike in property prices seeing De Lille accused of allowing property developers to run riot at the expense of ordinary Capetonians.

Simultaneously, however, De Lille has been vocal on the need to spatially transform South Africa’s cities, and has claimed that her commitment to this end was the major cause of her fallout with the DA. Her Good party campaigned before the 2019 elections on a platform which promised to accelerate land restitution by making use of publicly owned land, and called for an audit of every province and city’s public and private land holdings.

This ties in with the Department of Public Works’ existing plans, which include a stated commitment to fast-track the release of government-owned land for restitution purposes. The department acts as the custodian of more than 90,000 buildings and almost two million hectares of land — to which, metaphorically speaking, De Lille will now be handed the keys.

From that perspective, De Lille’s stated political priorities and experience are by no means a bad match with the Cabinet portfolio with which she has been entrusted.

The more intriguing question, however, is why Ramaphosa settled on De Lille as the most appropriate beneficiary of a bi-partisan gesture of inclusivity.

De Lille’s Good party won just 0.4% of the national vote in the 2019 elections, so it can hardly be claimed that she represents a large constituency whose co-operation would be useful to Ramaphosa. Good’s share of the vote was enough to secure the party just two seats in Parliament.

Although De Lille was criticised in the run-up to the elections for seeming to fudge her stance on fraught issues such as land expropriation without compensation, this perceived ambiguity may ultimately have worked in her favour. There is nothing of significance within the Good manifesto which would seem to pose a direct ideological challenge to ANC positions, as would have been the case if Ramaphosa had selected a politician from, say, the Freedom Front Plus.

In Ramaphosa’s prefatory remarks to the announcement of his Cabinet, he stressed that he had sought out “experience, continuity, competence, generational mix and demographic and regional diversity”. The fact that De Lille is a veteran, well-known female politician from the Western Cape — an area where the ANC sank to an unprecedented electoral low in the 2019 polls — would certainly not have hurt.

In addition, De Lille’s corruption-busting credentials from the Arms Deal saga fit nicely into the Ramaphosa narrative of the New Dawn clean-up.

The DA would argue, of course, that the allegations of misconduct with which the party charged her at the end of her mayoral tenure have significantly tarnished her clean reputation. But the fact remains that De Lille has yet to be successfully prosecuted on any of the DA allegations, and the opposition party’s bungling of her disciplinary process left a great deal of reasonable doubt in the public mind.

Some commentators have been quick to suggest that De Lille’s appointment by Ramaphosa was effectively a slap in the face of the DA. At a time when the ANC is in factional crisis, however, it is hard to believe that Ramaphosa would sacrifice a valuable Cabinet seat which could have been used to placate an ally purely in order to thumb his nose at the opposition. Neither is Ramaphosa known for playing petty politics of this nature.

But the DA itself has taken things one step further, with leader Mmusi Maimane telling several different media outlets on Wednesday night that he believed a Cabinet spot for De Lille had been part of a wider plan since De Lille left the DA.

Maimane told journalists that De Lille’s appointment was likely a “reward” for De Lille having played a “role” in the ANC’s campaign. The clear implication is that De Lille launched a breakaway party from the DA in some degree of cahoots with the ANC in order to diminish the DA vote.

“Good has been run independently without anyone else or any other party influencing it,” Arendse said.

He described Ramaphosa’s appointment of De Lille as “a surprise” and stressed that the possibility of a Cabinet role was never discussed between Ramaphosa and De Lille prior to forming Good or prior to the elections.

“[De Lille] will still continue as the leader of Good,” Arendse said.

The DA’s allegations of a political conspiracy between the ANC and De Lille are strongly reminiscent of IFP leader Mangosuthu Buthelezi’s response to the formation of the IFP breakaway party the National Freedom Party, with NFP leader Zanele kaMagwaza-Msibi subsequently given a deputy minister role in the Cabinet of former president Jacob Zuma.

Buthelezi has claimed that the NFP was devised and funded by the ANC in order to steal votes from the IFP, an allegation which the two parties have denied.

De Lille herself released a statement after the announcement saying that she would be “joining President Ramaphosa’s executive with open eyes and ears as a representative of good South Africans of integrity who love their country and demand better of their leaders”.

De Lille’s statement concluded: “It is time for South Africans to demonstrate that we can rise above party political differences”. DM