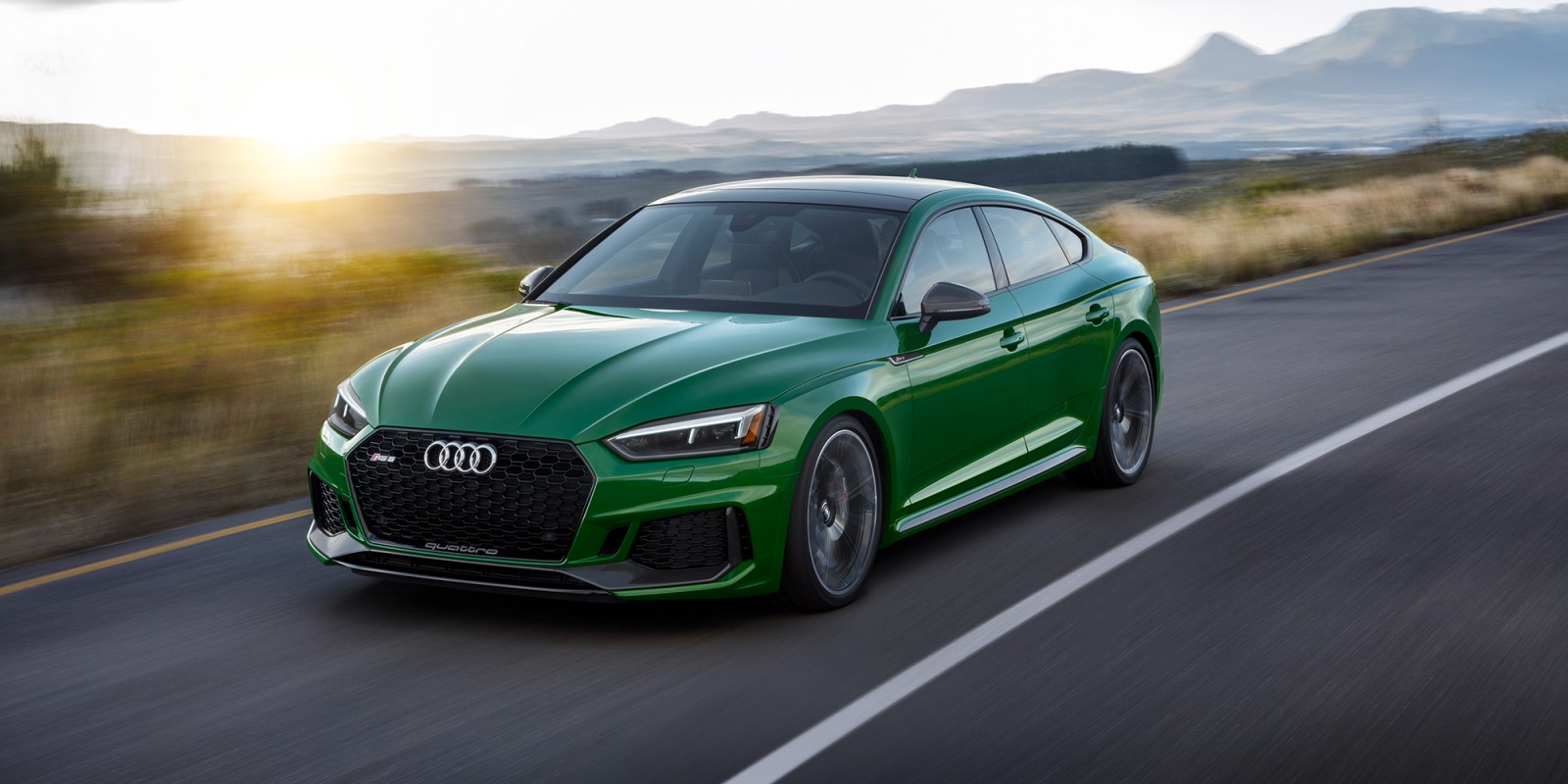 Spot an RS badge on an Audi, and you know it’s going to be fast. The RS5 Sportback isn’t quite as glamorous as the RS5 Coupé, but it’s more user-friendly, more practical and more spacious. Most of all, though, it’s still the real RS deal.

Sports cars are the stuff of dreams: Aesthetically arresting, dynamically exciting and often prohibitively expensive – which is why they typically fall into the aspirational (read: I want one, but can’t afford it) category.

Expense aside, there’s another complicating factor when it comes to sports cars: practicality, or rather, the lack thereof. With only two doors, two seats and just about enough luggage space for a lunchbox, most sports cars don’t make the grade as family transport.

As a result, those lucky enough to own and drive a sports car usually need to add at least one alternative vehicle, and often more, to the family garage: Something taller, more spacious and more practical than that low-slung dream machine. 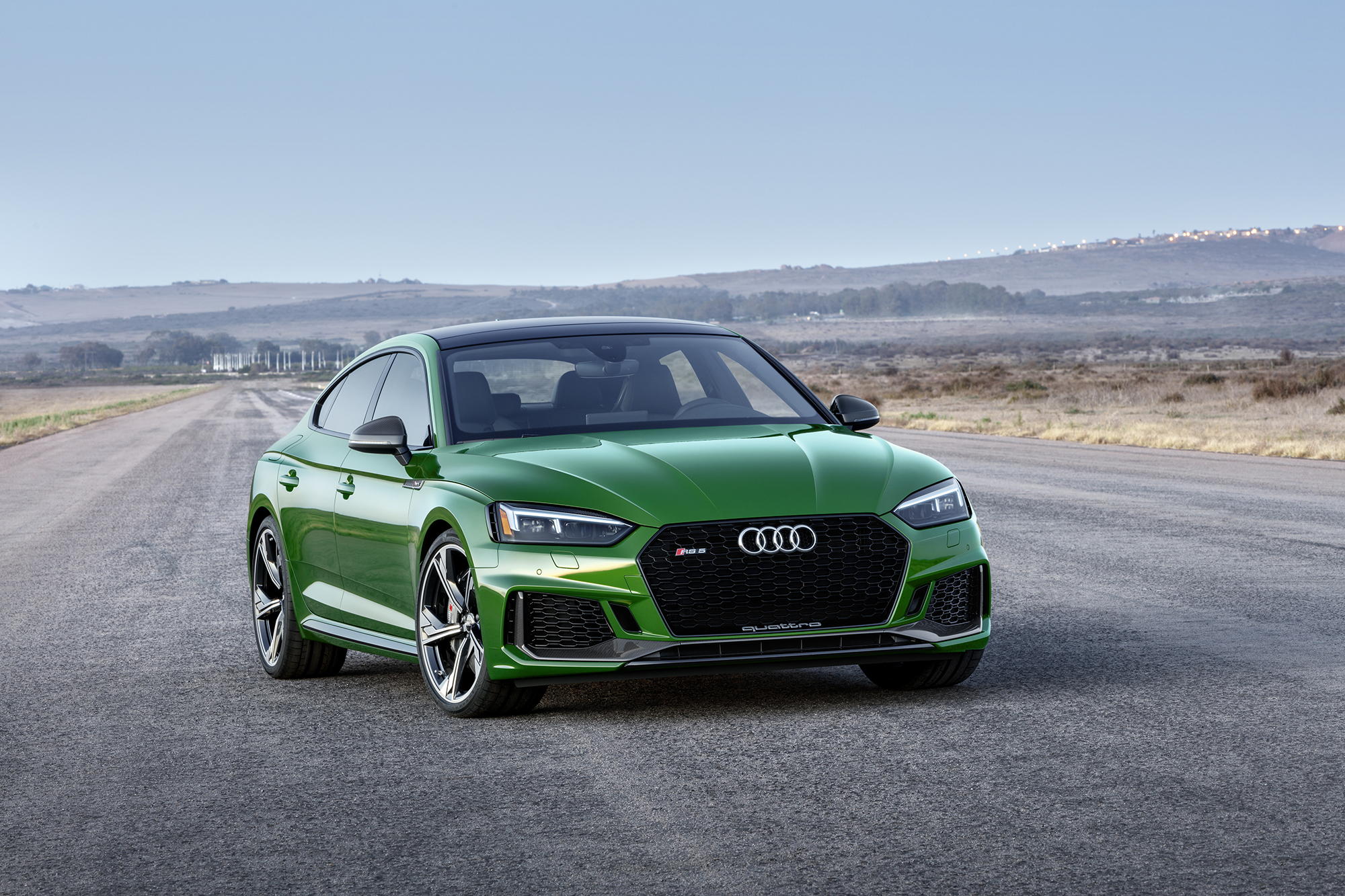 It doesn’t have to be that way, though: Not if you opt for a model that can be sports car and family four-door rolled into one. Admittedly, the choices are extremely limited, and they don’t come cheap – but then, you are (almost) getting two for the price of one.

Other members of the RS clan include a compact hatch and its sedan stablemate, and a stocky, hardcore compact SUV. But if its elegance, space and storming dynamics you’re after, the RS5 Sportback fits the bill like a racing glove. 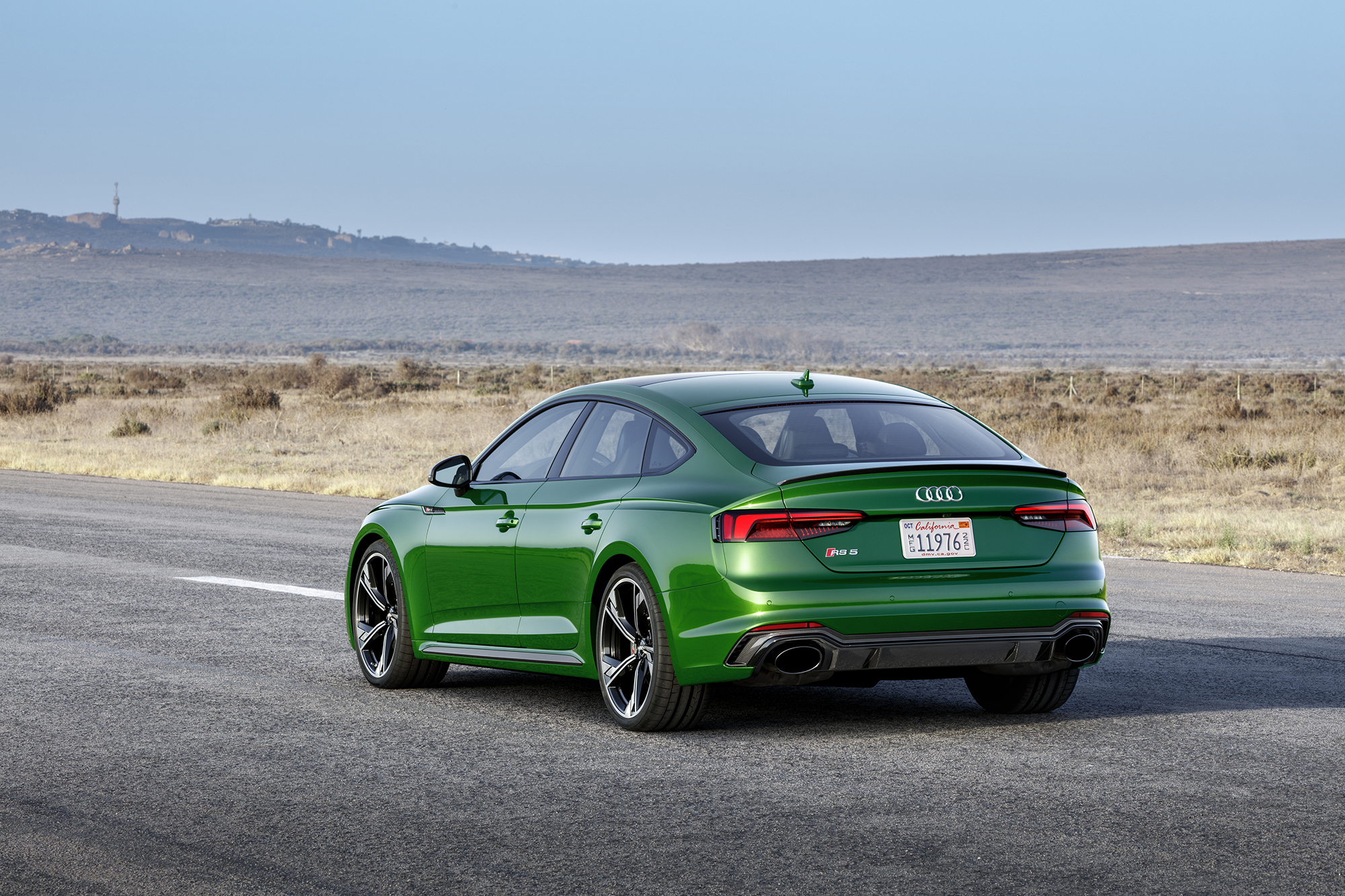 It’s the four-door sibling of the swoopy, sexy RS5 Coupé, and admittedly, adding the extra two doors has spoilt the aesthetic broth to some extent. It loses some of the coupé’s flowing lines, but introduces a welcome chunkiness that actually suits the RS character.

The RS5 Sportback hunkers down with all the lurking menace of a muscle car. Big wheels fill the bulging wheel arches to the brim, while a low front splitter, a finned rear diffuser and an unexpectedly subtle rear spoiler suggest stability-enhancing aerodynamics.

Deeper sills accentuate the scalloped flanks and muscular haunches, while exhausts the size of stove pipes leave little doubt that power is high on the agenda. 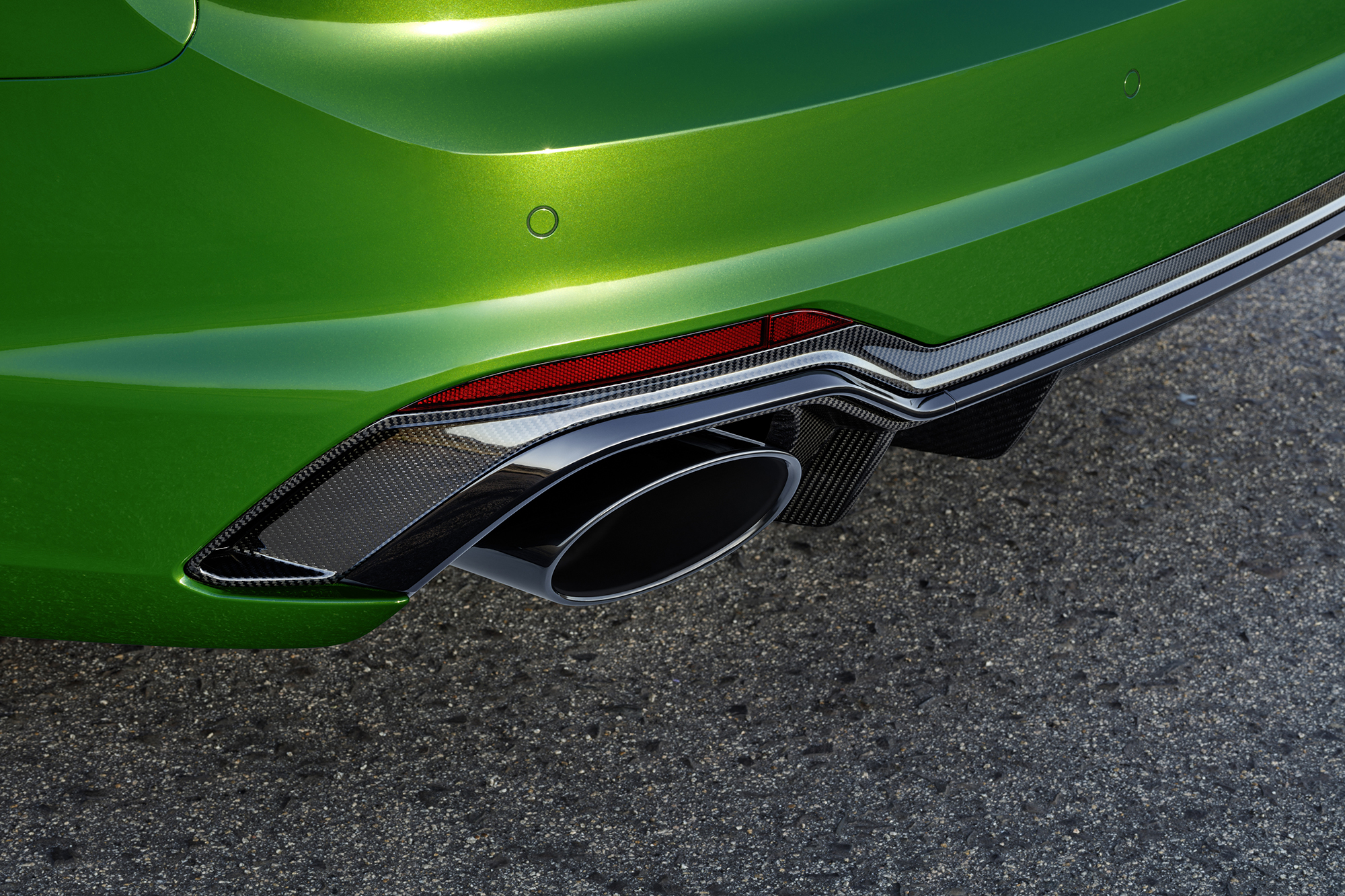 The emphasis shifts to more pragmatic attributes inside the Audi. The seats are wrapped in quilted leather, while carbon fibre and brushed aluminium accents provide further eye candy.

The instrumentation is hi-tech digital (and configurable), and there’s a hi-res screen for the infotainment system perched above the centre stack – a less than elegant solution. 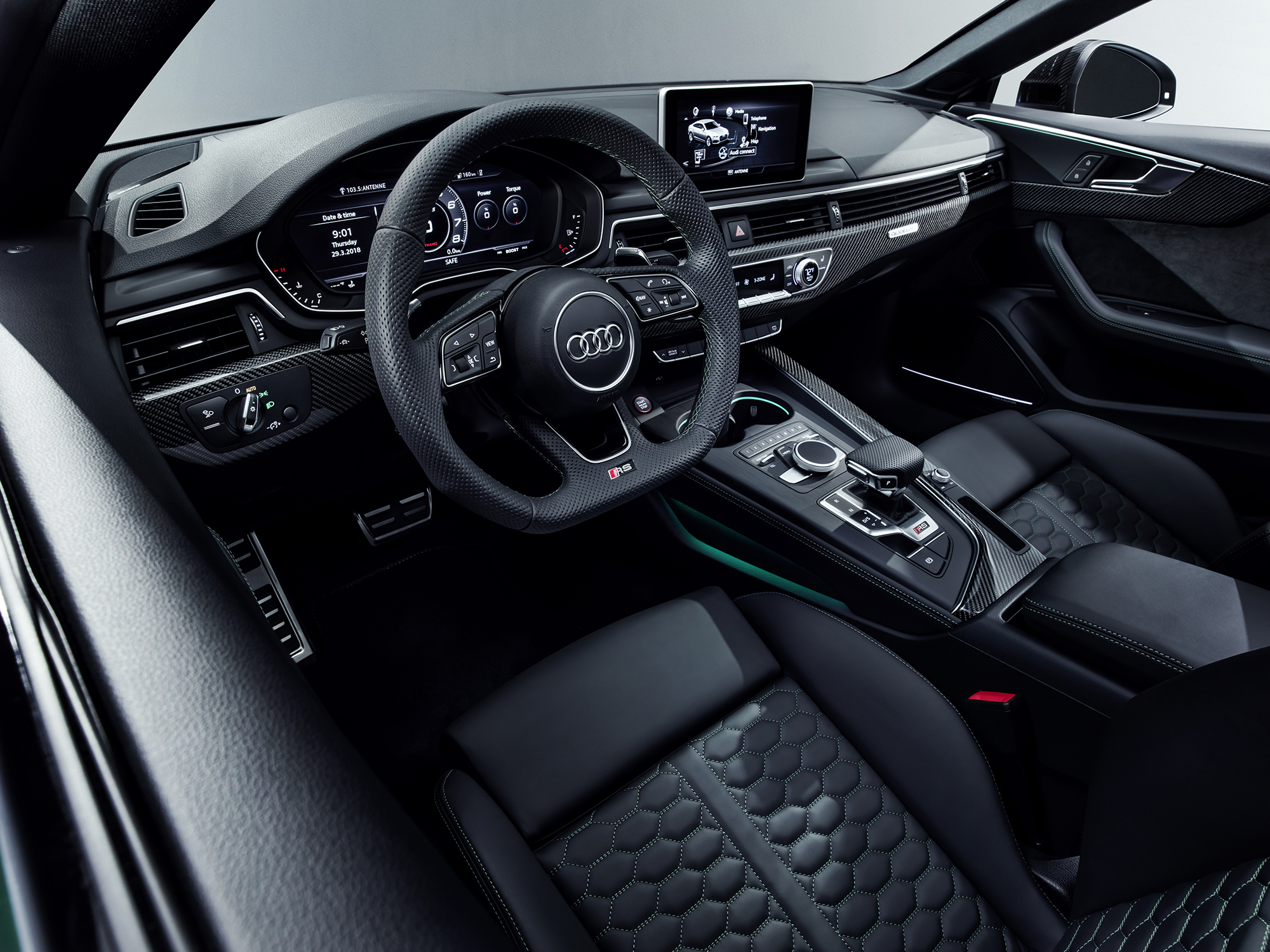 The execution finds a pleasing balance between extrovert and elegant, while the ergonomics (a long-time Audi strength) are admirably intuitive. It’s not quite cutting edge, though – the just-launched Q8’s minimalist, touch-screen cabin has instantly aged almost every other Audi model.

It does have a full house of kit, though – as it should, given its seven-digit asking price. The standard equipment list includes everything you’d expect of a premium-category four-seater in both luxury and safety terms. 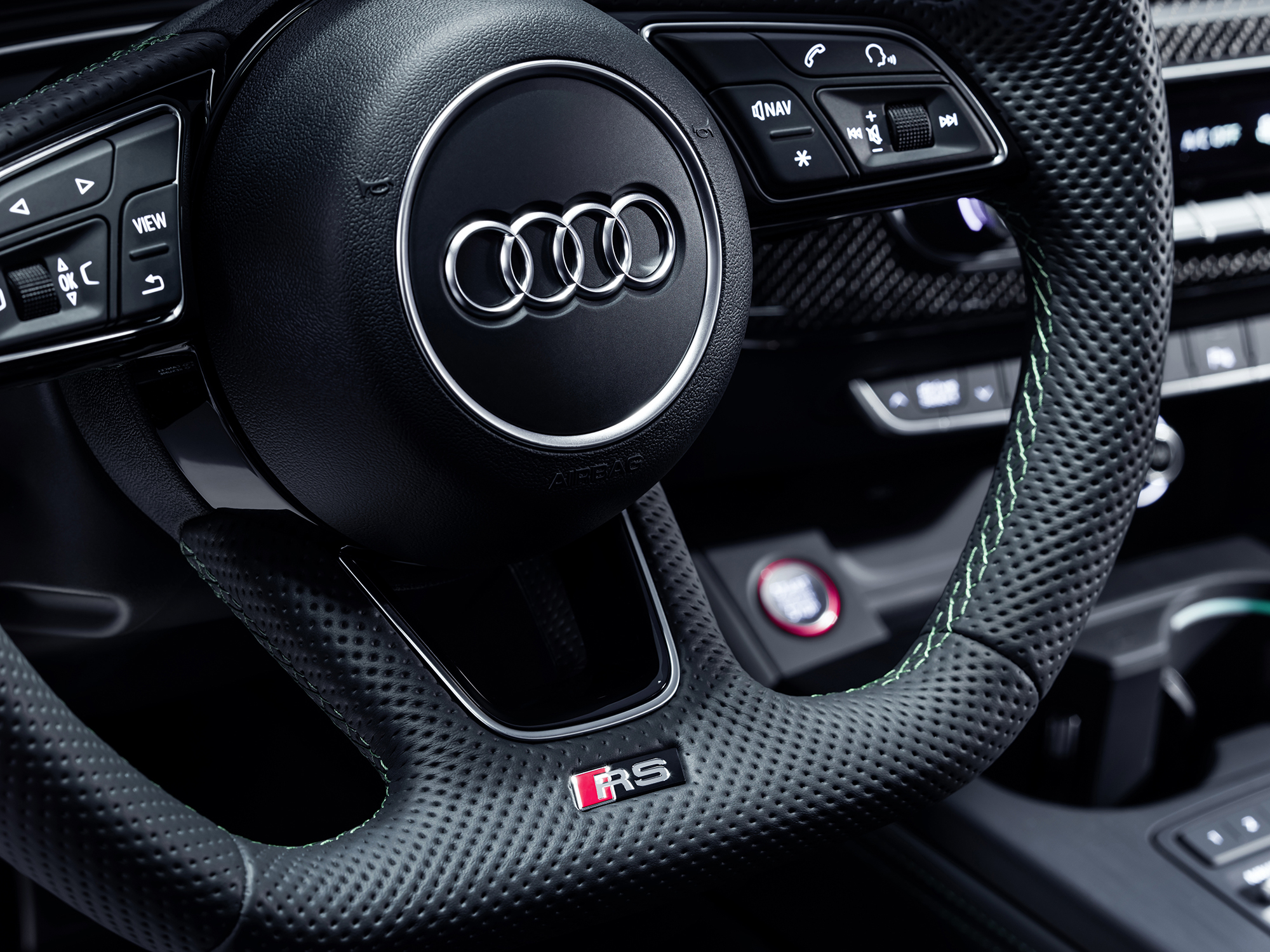 Even so, there’s plenty of scope for more from the added-cost extras list: The test car’s retail price reflected more than R150,000 of options, ranging from bigger, 20-inch wheels and a head-up display to seat heating, a glass sunroof, matrix LED headlights and special paint. 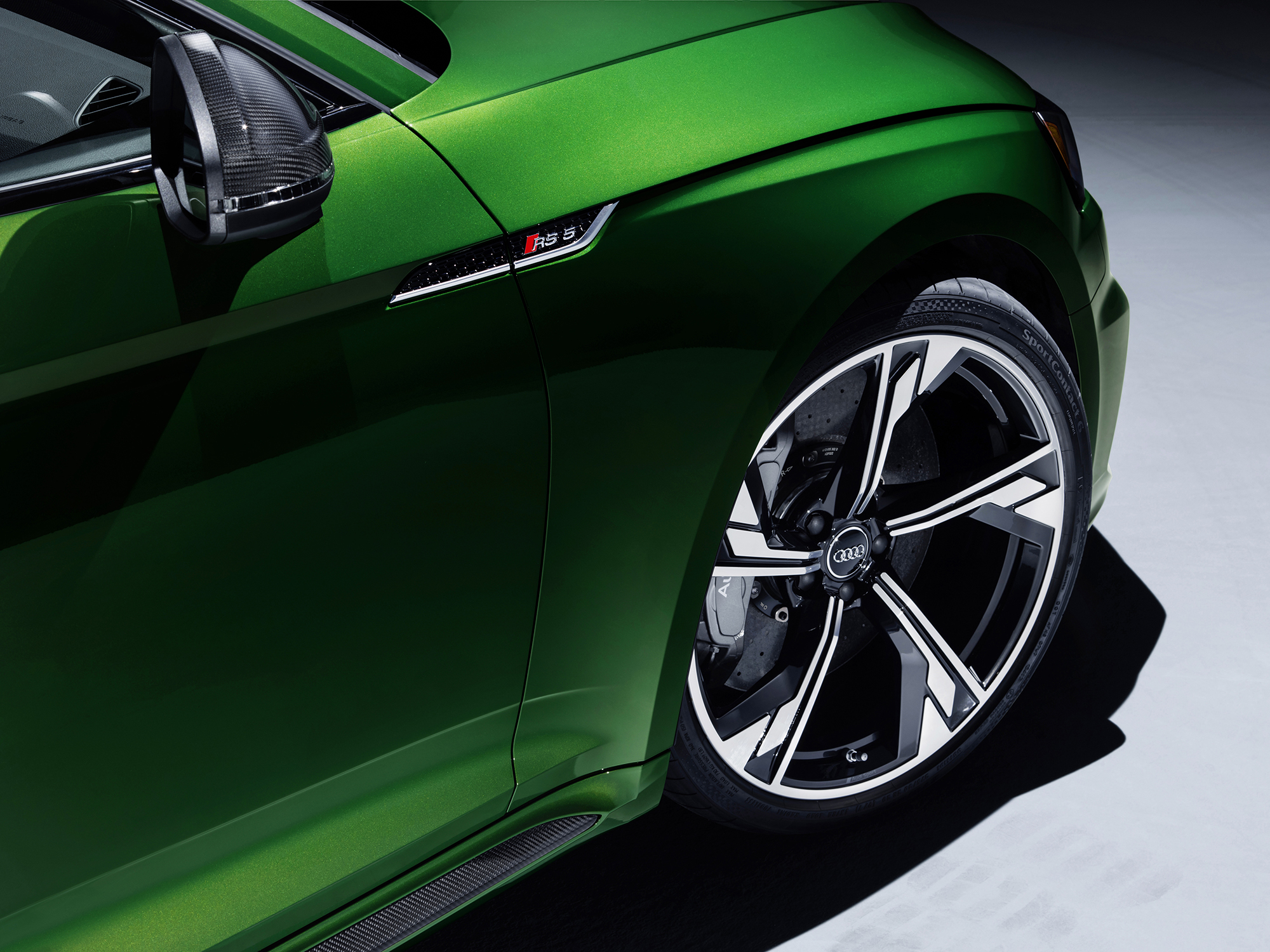 From a family motoring perspective, there’s the practicality and ease of access provided by the four-door layout, and even though the roofline is quite low, entry and exit from the rear seats is easy enough.

The fastback rear hosts a tailgate that opens wide to provide convenient access to a generous 480 litres of luggage space. Want to lug even more stuff? Then folding down the split rear bench seat creates a cavernous 1,300-litre cargo area – in a sports car… 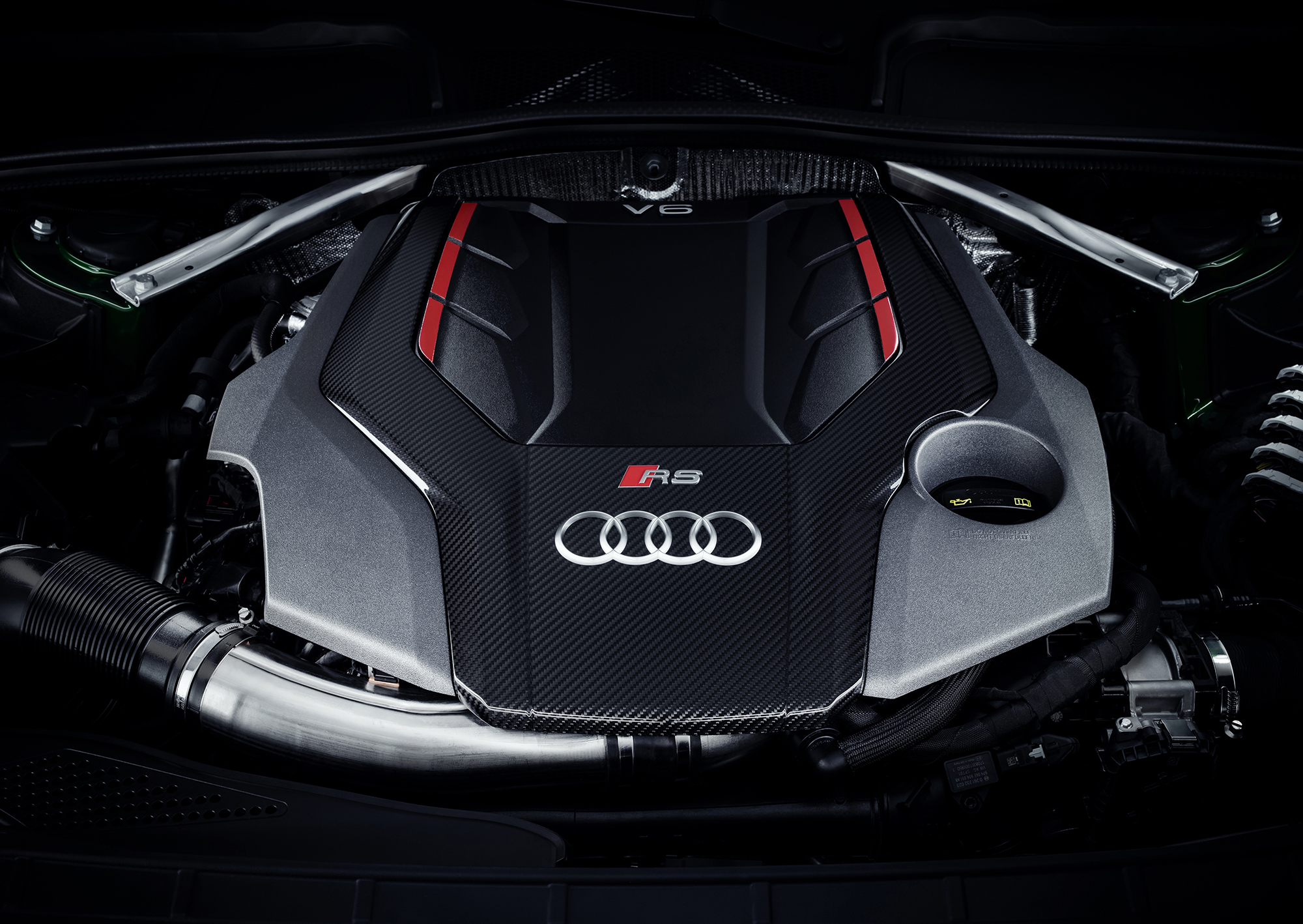 And this Audi does deserve that title. Its twin-turbo V6 punches out 331kW and 600Nm, enough to propel the sleek four-door to 100km/h from standstill in just more than 4sec. That’s despite the Audi’s 1.72-ton mass.

Quattro all-wheel drive ensures tenacious traction, varying the urge between the front and rear axles when required to optimise grip. A sport differential will even adjust the torque between the rear wheels for further improved composure. 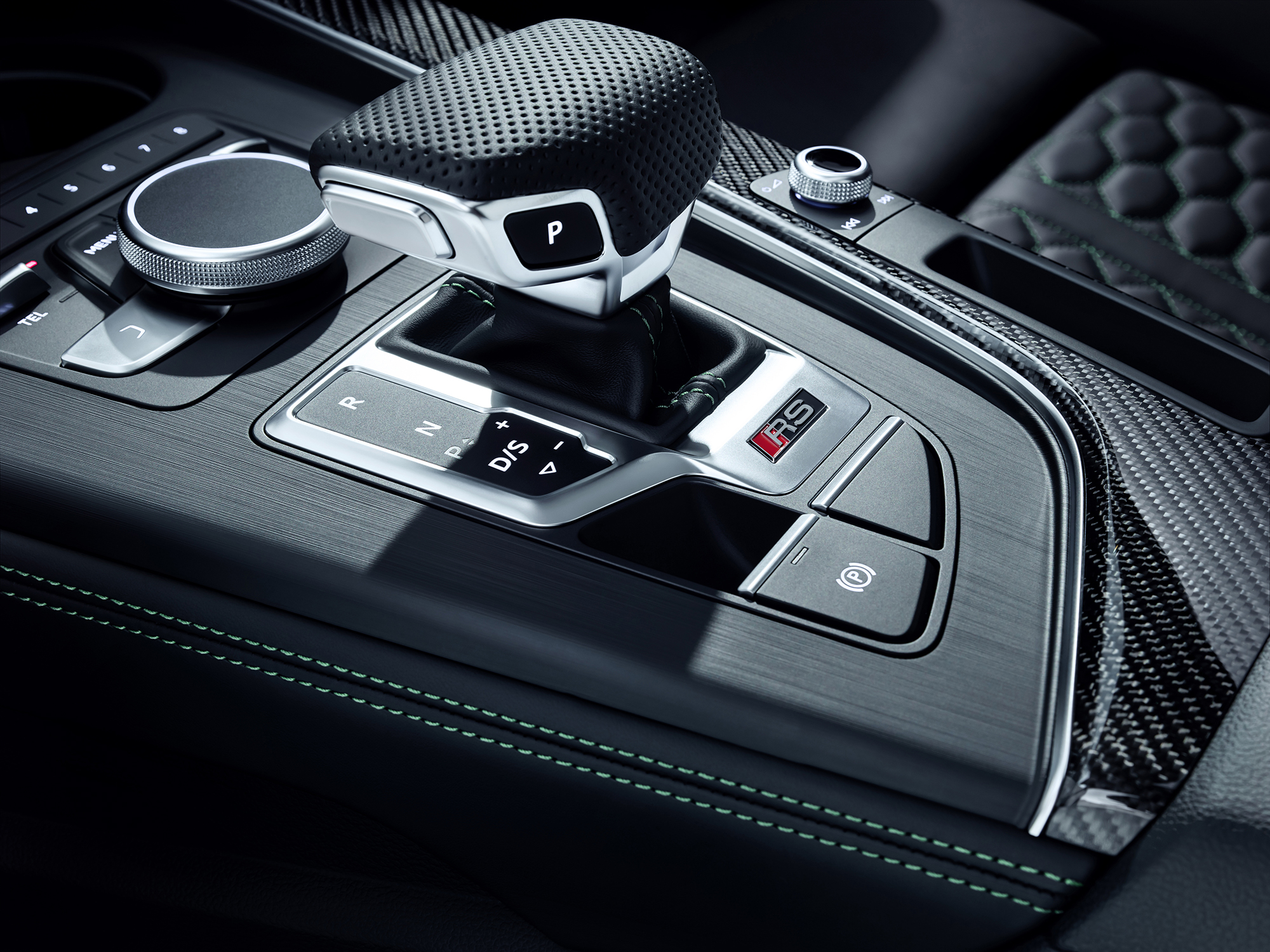 The eight-speed Tiptronic gearbox is a joy to use, delivering fast and incisive shifts that become almost percussively intense when you opt for the Drive Select system’s dynamic setting. Manual changes via the shift paddles add to the experience.

And yes, the experience is very much sports car. Admittedly, a 1.7-ton four-door will never be as wieldy as a focused, lightweight performance machine, but the RS5 Sportback delivers its dynamic wares with an emphatic assurance.

The quattro system is a key contributor, keeping things tidy when hammering it through some twists and turns. The stance remains mostly neutral, with no speed-scrubbing understeer, and just a hint of rear-axle liveliness to sharpen the turn-in and up the engagement levels. 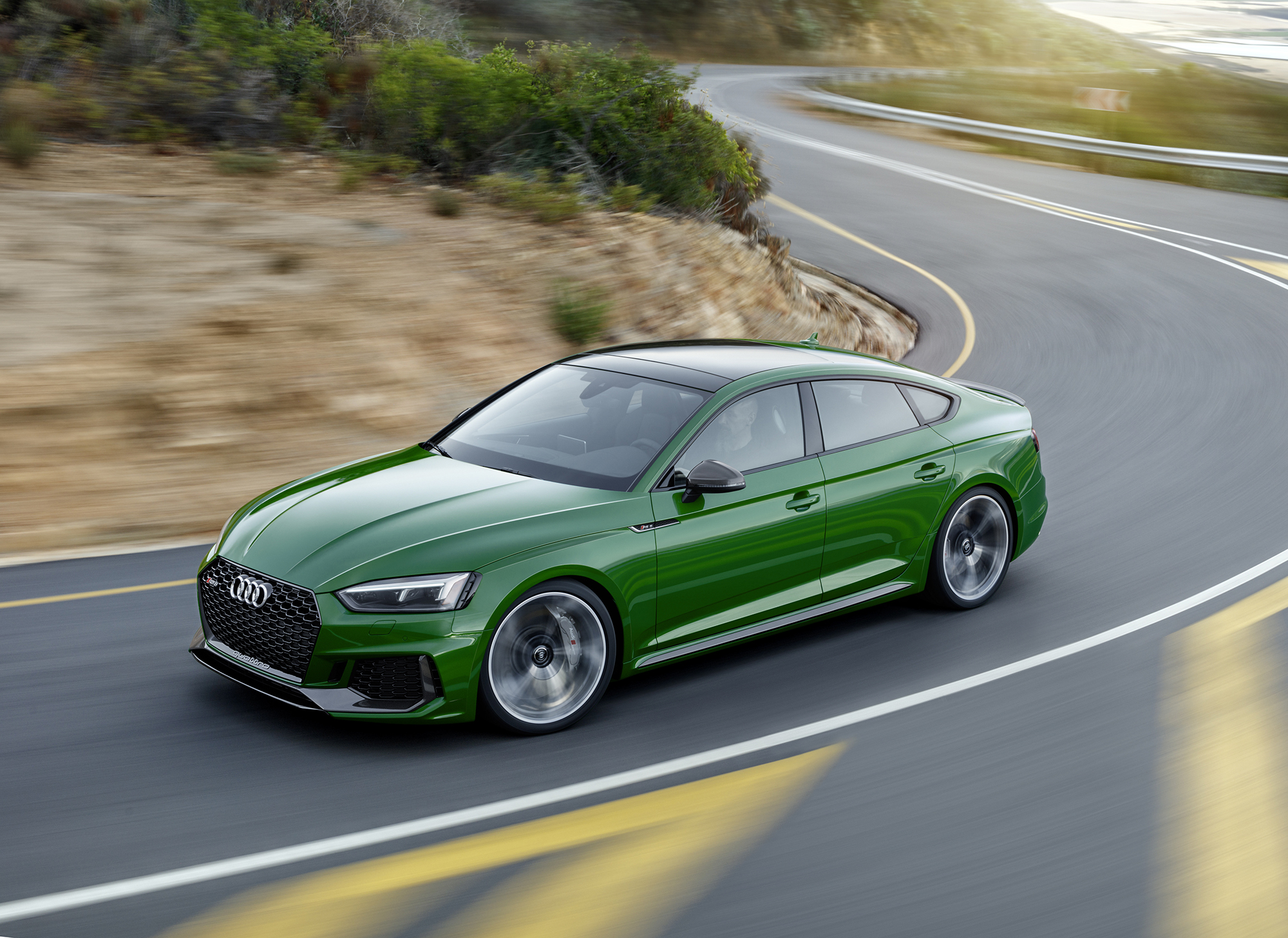 If there is a criticism, it’s that the RS5 is almost too competent for its own good. The on-rails handling and broad power band make it almost impossible to wrong-foot, unless you’re really pushing the limits.

To some, that might translate into less engagement than expected of a thoroughbred sports car. For others, it will allow access to exceptional performance without a chronic case of sweaty palms.

The V6 adds to the magic. It’s a gem, with loads of urge right across the rev range and a meaty throttle response to match. That also allows the Audi to deliver effortless cruising and commuting when it assumes its family transport duties. 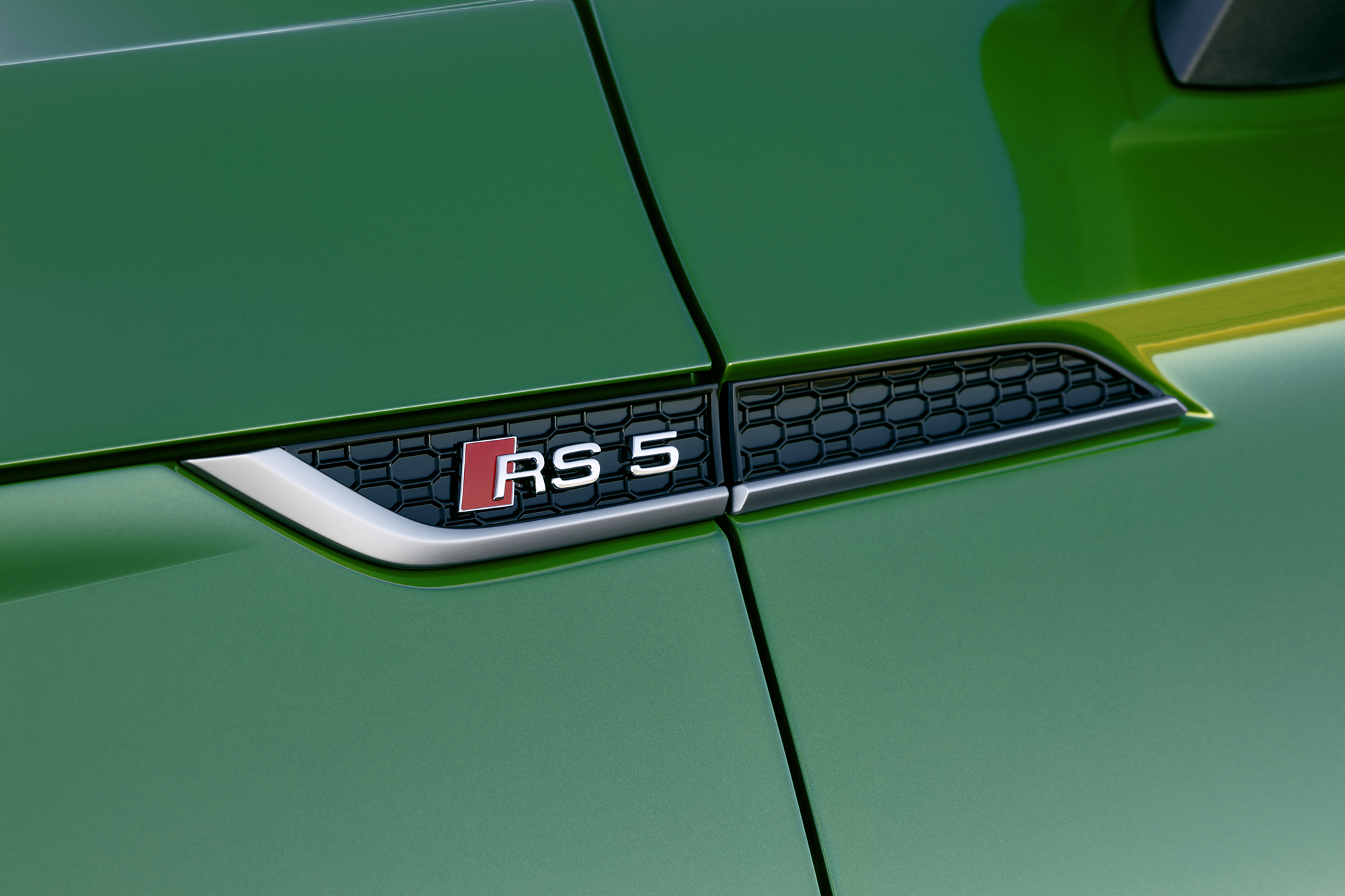 On that topic: For all its spaciousness and practicality, the RS5 Sportback always feels more sports car than four-door. The suspension is taut, and on the optional 20-inch wheels as tested here, the ride quality is firm at best.

In Comfort mode, efficient damping takes care of the worst bumps and dips, but don’t expect the plush ride of a luxury sedan – this Audi is resolutely athletic, as it should be.

Combining the traits of a sports car and a family four-door is a compromise that can go horribly wrong. To Audi’s credit, the RS5 Sportback manages to straddle both roles with admirable conviction, even though it favours sport over comfort.

Buyers prioritising cocooning luxury over get-up-and-go should be looking elsewhere. But if you want the same car to deliver effortless daily motoring and authentic sports car excitement, served up with a dash of aesthetic flair and surprising practicality, the Audi RS5 Sportback deserves to be on the shortlist. DM

Perhaps too settled for some.