Lindiwe Sisulu fears that she will lose the coveted role of Minister of International Relations and Co-operation because of her decision to downgrade South Africa’s embassy in Israel to a visa office, say her officials.

Lindiwe Sisulu is facing a campaign by the SA Jewish Board of Deputies for this decision. On Friday, the community newspaper, the powerful Jewish Report, called her “SA Jewry’s threat in government”. The local South African Jewish community is up in arms about the downgrade; a smaller number of Jewish activists for peace, like former Intelligence Minister Ronnie Kasrils, support the move.

President Cyril Ramaphosa is said to have isolated his foreign minister and said in meetings that her stances on Israel and Rwanda (she has criticised extrajudicial killings of political opponents of President Paul Kagame in Johannesburg) were making geopolitics tough for him.

Both DIRCO and the Presidency have said they will not respond to speculation about a new Cabinet.

Sisulu has been a loyal ally to Ramaphosa. At the party’s conference at Nasrec, Johannesburg where Ramaphosa was elected party president, she stood down her bid for party president and for deputy president to ease his bid. In the end, Ramaphosa only won that nail-biting contest by 179 votes, a victory that would not have been possible but for Sisulu throwing her lot in with him, say her supporters.

Now, the minister is feeling isolated and there is political talk that the former speaker of the National Assembly Baleka Mbete could be crowned foreign minister when Ramaphosa announces his Cabinet after the presidential inauguration on May 25. Sisulu would not covet a return to Human Settlements as she has headed up the housing portfolio previously.

The downgrade (no, not that one)

At the ANC’s Nasrec conference, two conference resolutions were the only true policy points debated in what was largely a contest for the top position between Sisulu and then-candidate Minister Nkosazana Dlamini Zuma, said officials who were in the meetings. The two resolutions were on the ANC government taking a more activist position against Israel and on the decision to expropriate land without compensation to speed up transformation.

At the time, US president Donald Trump had recognised Jerusalem as the capital of Israel, an incendiary move. The ANC conference criticised this. It resolved that: “Consequently, and in order to give our practical support to the oppressed people of Palestine, the ANC has unanimously resolved to direct the SA government to immediately and unconditionally downgrade the South African embassy in Israel to a Liaison Office.”

In April, Sisulu acted on the resolution and announced that the downgrade was in progress; at the beginning of May, Ramaphosa said in a pre-election interview with the Jewish Report that Cabinet had not yet approved the downgrade.

“Once the Cabinet has fully engaged and come out with a view on this matter, it will be communicated to the public. In other words, we remain seized with the modalities of downgrading the South African embassy in Israel, and this matter has not been finalised,” the President said. Israel has not responded to Sisulu’s threats and maintains a full embassy.

But, in Sisulu’s view, the matter had been finalised and she was implementing an ANC resolution. In Sisulu’s view, Israel is in violation of international laws of occupation and UN resolutions against settlement building.  The ANC resolution on Palestine and on the downgrade of the Israeli embassy was adopted unanimously; the land expropriation without compensation resolution, by comparison, was not a unanimous resolution. Both Sisulu and Ramaphosa have faced questions in Parliament of when they would affect the downgrade.

Why Israel, ask SA Board of Deputies

On the front page of the Jewish Report on Friday, the SA Jewish Board of Deputies’ vice-president Zev Krengel said Sisulu is the “single biggest enemy in government” to SA’s Jewish community. The article, written at the IEC results centre celebration last week reported that “There was a sense of relief this week, however, as jovial photographs emerged of (Jewish) communal leaders fraternising with Ramaphosa and other ANC stalwarts including ANC secretary-general Gwede Mantashe (sic) and Nkosazana Dlamini Zuma….” (Mantashe is former secretary-general.) 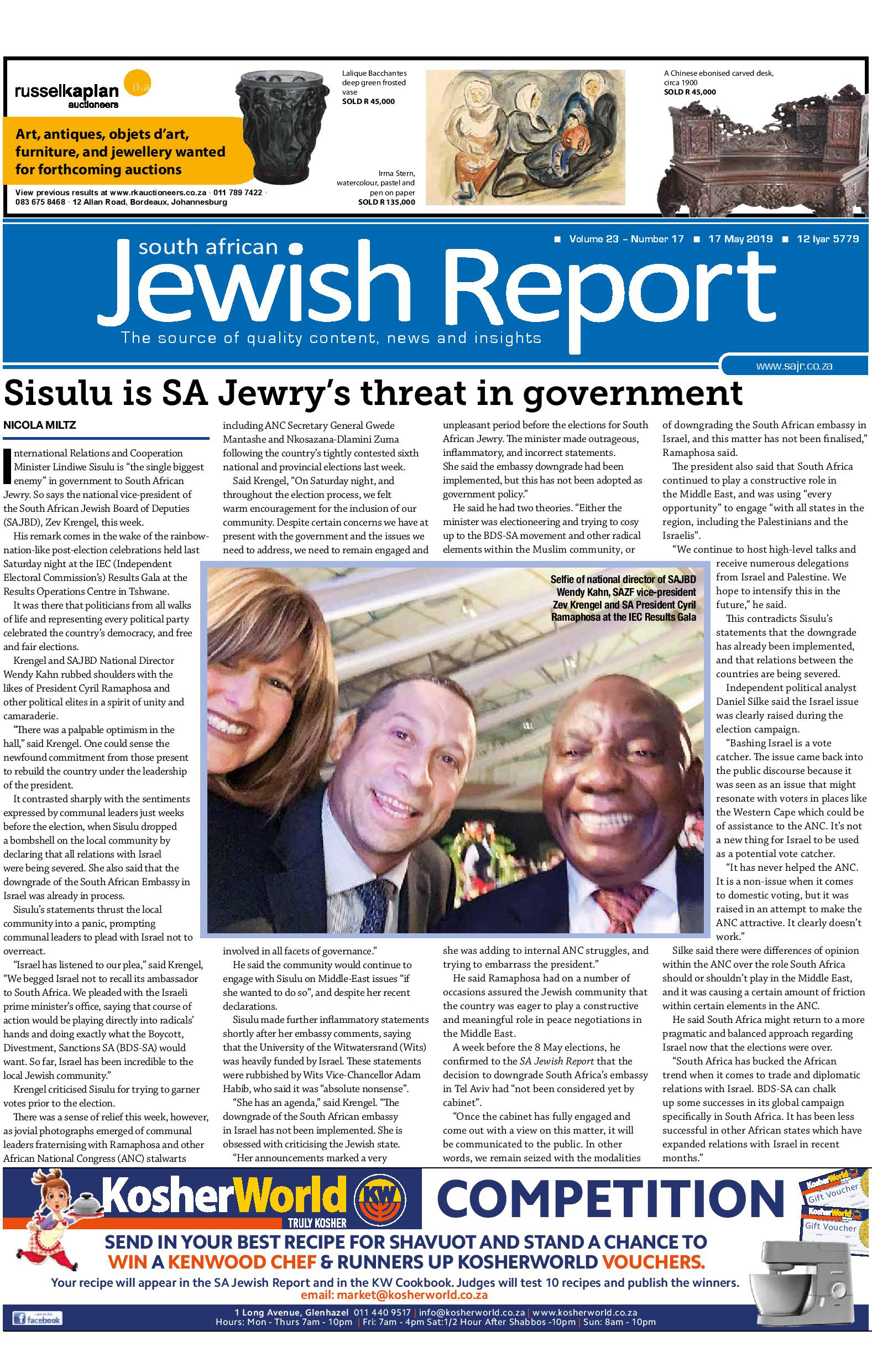 “We are on the same page as the ANC in seeking a two-state solution (for Israel and Palestine),” Krengel told Daily Maverick. He added that he could not understand the rush to downgrade the embassy when other ANC resolutions (like that on land) were going through exhaustive consultative processes.

“There is no minister who has caused more unhappiness than Lindiwe Sisulu to the Jewish community,” said Krengel. He added that South Africa’s action against Israel was out of step with the BRICS nations as Brazil, Russia, India and China which all maintained strong trade and fraternal links with Israel.

The ANC has always held close ties to the PLO as liberation movements and a significant part of the governing party believes Israel to be a neo-apartheid state.

The BRICS countries support the Palestinian struggle but maintain engagement and links with Israel.

Support for Palestine puts Ramaphosa in a tough spot

If the EFF and the ANC caucus push Ramaphosa to implement the resolution to downgrade the South African embassy to a visa office as Sisulu has started, it will place him in a tough spot. The two caucuses together now have a two-thirds majority in the house; the EFF holds a similar position on Israel to that of the ANC.

But the downgrade and a tougher stance on Israel can isolate Ramaphosa from one of his own key kitchen cabinets – the business community has many Jewish luminaries who are said to be upset at the downgrade decision.

In an interview with Investec founder Stephen Koseff, Ramaphosa said: “I know the Jewish community was concerned, shocked and bewildered at the ANC resolution. What we are seeking to do now is to say ‘does South Africa have a role to play a role in promoting peaceful outcomes (in the Middle East generally and in Palestine and Israel specifically)’. Our view is we do have a role to play and our foreign policy is going to be directed toward doing precisely that. Especially as we take our seat as a non-permanent member of the (UN) Security Council.”

Ramaphosa appears to support engagement over isolation with regard to Israel and this has pitted him against his party and his foreign minister who now seems likely to face the presidential axe. DM