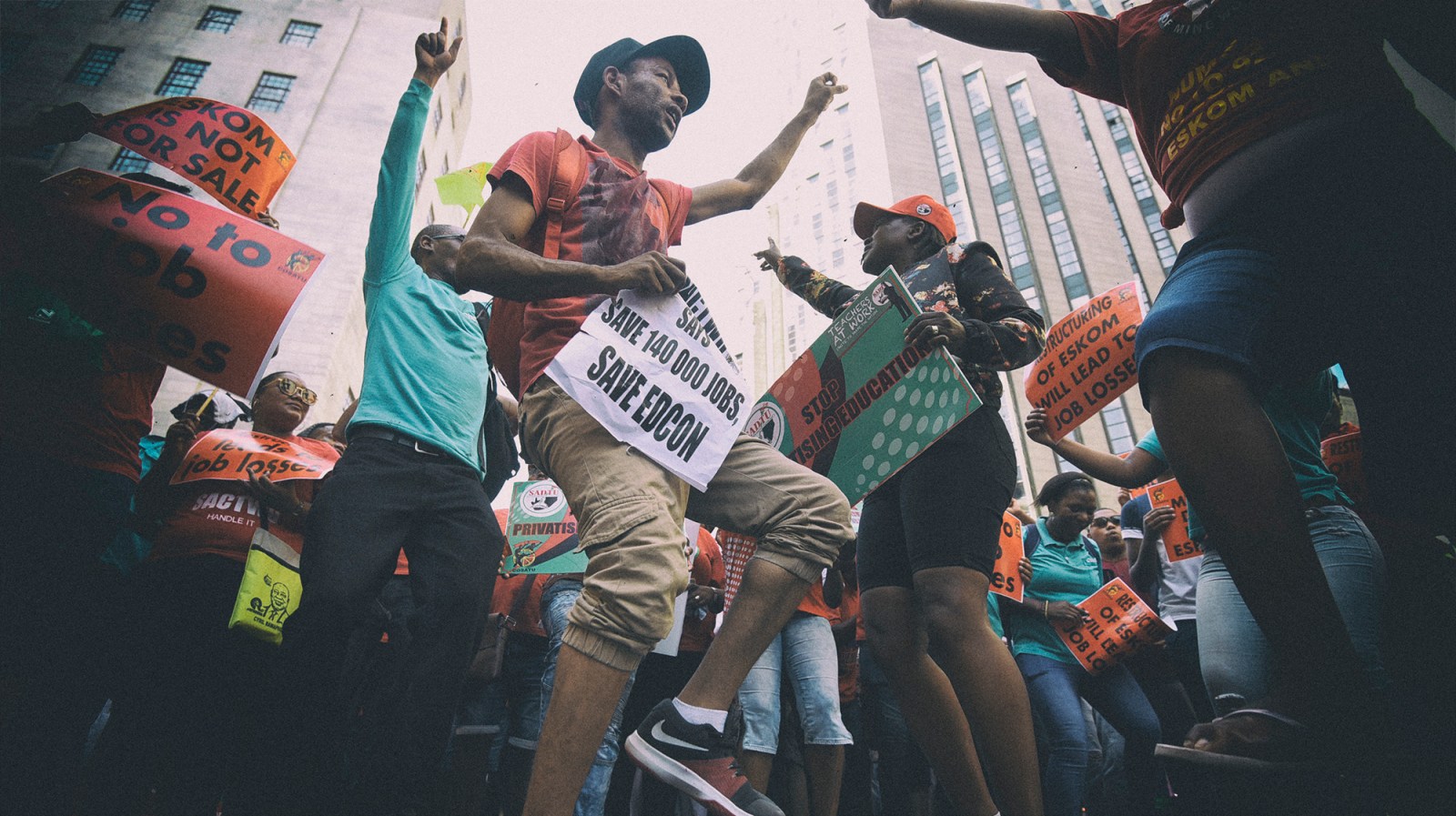 Trade unions have been one of the dominant forces in South African politics for more than three decades. But as the world races into the Fourth Industrial Revolution and a global gig economy, they could find that political power drastically diluted.

For the last 20 years or so, capitalists and the middle classes have complained that unions, and the constituency they represent, have had too much power. There has been a common refrain that they are holding the “country to ransom”, and able to inflict damage on the rest of the nation. There are also fears that attempts to restructure state-owned entities and to save Eskom could be sabotaged by unions. However, despite the official status of Workers’ Day, there are important signs that may indicate that workers’ power has peaked a while ago, and is now declining.

This could have important consequences for the future of our politics.

Since at least the rise of the National Union of Mineworkers (NUM) in the 1980s, unions have had the power to strongly influence South African politics. As workers successfully won more rights, and then the great moment of liberation in 1994, they were able to use their power in important ways. Changes were made to the Labour Relations Act, and the workers are now treated with much more respect. Importantly, this has become part and parcel of daily life; the power relationship between workers and managers has become more level; everyone knows their rights.

Politically, the high water mark of the power of unions was probably the period leading up to the ANC’s Polokwane Conference.

Of course, this was tied to Cosatu and its political power. It was then Cosatu general secretary Zwelinzima Vavi who first suggested that now former-president Jacob Zuma was a “tsunami” that couldn’t be stopped. Cosatu was able to get higher and higher pay increases from the government.

But things changed quite quickly after that, headlined by the split of Cosatu after Mangaung and the breakaway of metalworkers’ union, Numsa. When Vavi left (or was thrown out), the writing was on the wall.

All three have become weakened because of events in the political sphere.

Cosatu has lost hundreds of thousands of members, and appeared to be divided over whether or not to support Zuma. Its then President S’dumo Dlamini supported him, often in the teeth of anger from Cosatu members.

Saftu, which was formed by Numsa, was supposed to be the start of a very real political shake-up. The stated reason for Numsa’s expulsion from Cosatu was that it refused to support the ANC. This was expected to be the building block of a new political party. While there are now posters for the Socialist Revolutionary Workers Party on lamp posts and poles in different parts of the country, no one seriously expects them to make any dent in the elections.

Even Fedusa, the one federation that is not formally or historically linked to the ANC, has suffered. Its general secretary, Dennis George, has been placed on precautionary suspension by his movement, because of his alleged involvement in the Ayo Investments deal involving Dr Iqbal Survé.

All of this suggests that unions, and their constituency, are losing power.

In some ways, the process of this weakening has been very similar to what is happening in the main political parties. Divisions have led to splits which have led to weakness. And, as with the rise of the EFF, the one union that has grown strongly is a more radical movement, Amcu.

This suggests that the constituency of workers is following the trend of the rest of our society – splitting up in many ways.

However, there is an important fork in the road looming which could see the power of unions tested in a big way.

It is becoming more and more clear that the government will have no choice but to restructure the SoEs and retrench thousands of workers, who all belong to unions. This is not because anyone wants these workers to lose their jobs, but because the government has simply run out of money.

The real question then is what this will do to unions. If, despite their rhetoric and promises of “bringing the country to its knees”, they are unable to stop the retrenchments, they will be seen as having lost significant power.

Here again, the divisions between them are likely to be key, and could allow President Cyril Ramaphosa to enforce decisions that simply could not have been taken several years ago.

The key dynamic is what happens at Eskom. It is well known that it is literally living hand-to-mouth at the moment, and could run out of money any day. In 2018, unions were able to win a wage increase despite Eskom’s board offering a “zero-percent increase”. To achieve that victory, it appears that someone was happy to sabotage the production of electricity. Eskom has said in public that sabotage was responsible for load shedding during that time, although the unions have all denied it.

The fight this time will not be about wages, but about jobs themselves, which could make it a much harder battle.

In some ways, this fight will determine South Africa’s fate. If the two main unions at Eskom, the NUM and Numsa, are defeated, Eskom could possibly become financially sustainable and able to continue. If they win, the government will have to keep paying for Eskom at a rate which it may simply not be able to afford.

It can sometimes appear that unions have all the aces here, that they are simply able to sabotage Eskom in a way that government cannot. However, it may be that the two unions are actually quite vulnerable.

If there is one thing that unites South Africans it is the emotions they feel during periods of load shedding. And it is likely that government in general, and Ramaphosa in particular, could easily blame unions for any problems that now crop up. As a result, unions could find that public opinion turning against them creates big problems. This could be a very public fight and good communicators such as Public Enterprises Minister Pravin Gordhan could fairly easily make every single dark room look like the fault of unions. This could lead to union members becoming incredibly unpopular within society, especially when it is explained that Eskom is crucial to our future.

In the meantime, unions may also be vulnerable to another approach from government.

It has by now become clear that the march of history is against coal-based power generation, and that renewable energy is the future. Any worker with an eye on this future might well think that any opportunity to be a part of that renewable energy is worth pursuing. As a result, the government could easily ensure some sort of easy entry into this industry, through training and other initiatives.

This might be a much easier and less traumatic way of dealing with this difficult problem. However, in the longer run, as Eskom becomes less of a monopoly, and renewable energy grows through different companies and installations that are independent of each other, so the power of these unions will be spread, rather than concentrated. This, in turn, could continue the process of weakening and diffusing them.

This may well please the middle classes and those who manage workers. But it could well leave workers in a vulnerable position. They will not be able to campaign and organise in quite the same way. While this is happening in other countries too, those workers might well feel that they are not to blame for these processes. Instead, it might well be that their leaders, those who got involved in high-level politics that led to splits and the diffusing of their power, are responsible.

As the world’s economy shifts and people talk about the “gig economy” and people get the ability to sell their services all over the world at the swipe of a touchscreen, creating and organising unions is going to get harder and harder. As a result, it may be that the decline we are seeing here is inevitable and cannot be stopped. And it may be that we will not see the likes again of big union movements arranged in the way they once were.

This will have significant effects as unions often defend certain freedoms. Their ability to organise has led to big political changes and campaigns for freedom in countries such as our own, Poland and elsewhere. If unions decline and are unable to ever form again, that may mean that an important ingredient of freedom is weakened.

In the meantime, and in the shorter term, the government might well simply celebrate their ability to save money, save Eskom, and possibly save the nation. DM