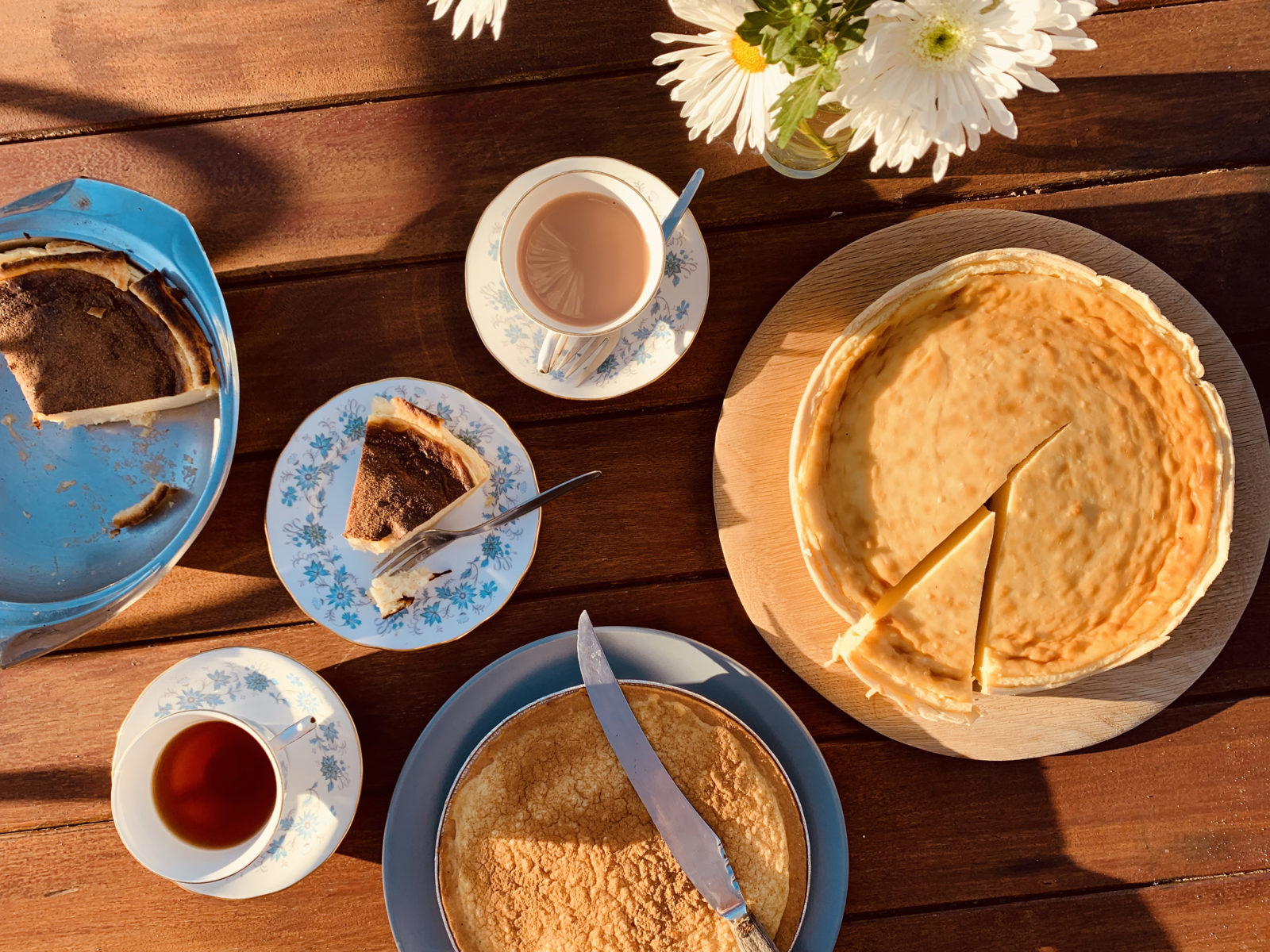 Made from the humblest of farm ingredients such as milk, eggs, butter, sugar and flour, the plain old milk tart elevates ordinary kitchen staples to perhaps their most noble form – a sweet custard delight infused with cinnamon and baked into a comforting crust that’s both rich and delicate.

It’s impossible to write about the versatility of farm fresh milk and not consider the allure of our iconic “melktert”. It’s a classic South African staple, found in every shape and form across the country, and it deserves a dissertation on its own.

It’s what South Africans crave after a Sunday afternoon snooze with coffee. We have it at weddings and funerals and Christenings piped into small “doppies” (pastry shells) and packed on a platter alongside frozen koeksisters and cream horns. It’s sold in foil plates at every church bazaar in every small town and even mass-produced by South African supermarket chains. It’s a home industry store staple and the focus of many generational food fights and “secret family recipes”.

So revered is milk tart in South Africa that in 2014 the very first National Milk Tart Day was instituted on 27 February. Five years on and South Africans have come to love the idea. According to Sophia van Taak, one of the founders of National Milk Tart day, the celebration is about the nostalgia and hospitality that this classic represents.

“Every South African has a special milk tart memory or recipe or story they can tell you. Our campaign from the start was to preserve those stories and celebrate the culture of hospitality. In the platteland, especially, people invite you into their homes. More often than not, milk tart forms part of the equation,” she says. “It’s this practice that we wanted to celebrate.”

She says the official Milk Tart day creates a platform where cherished food stories can be shared, regardless of the shape or form of the milk tart in question.

Indeed, milk tart’s many variations are often a big topic of discussion.

I’d like to argue that there are mainly two types of milk tart made in South Africa. One variation uses a puff pastry in which the filling is poured and then baked, while the other uses a shortcrust pastry that is baked and then filled with a cooked milk tart filling.

As with our equally beloved koeksisters and koesisters, the fundamentals of the two variations are similar. Koe(k)sisters are the same in that they’re both doughy, deep-fried morsels bathed in a sugary syrup…

However, koesisters and koeksisters represent parts of our SA culture that are – quite literally – worlds apart. One originated from Dutch and French (European) cooking, while the other nods to a distinct Indonesian influence expressed in a most subtle mix of spices and the use of coconut.

The two strands of milk tart we love in South Africa also celebrate two different food stories. The puff pastry milk tart cannot deny its Portuguese roots, seen in the globally celebrated pastéis de nata. Our version differs mainly in size. A milk tart is typically made in a larger pan and then sliced and served in triangles, as opposed to the hand-held mouthfuls you’ll find in Lisbon. Apart from size, the recipe is nearly identical save for a higher ratio of eggs used in the pastéis.

True believers of the milk tart mastery call this puff pastry version “the holy grail”. A SARIE KOS competition in 2009 also recognised this in crowning the country’s best milk tart, baked by Deona Tait from Pretoria.

The recipe, Deona says, belonged to a Helie Williams from Bellville.

“She swore that the milk tart needed to be baked in an enamel tin. It’s the perfect conveyor of heat and ensures the pastry does not go soggy beneath the filling when baking.”

This recipe from Deona and Tant Helie takes dedication and planning. It involves around 20 steps and various processes, many of which need to happen simultaneously… daunting for a first timer (but more about that later).

Berna Kirsten from Cradock is renowned for her delicious deep-dish delight which many milk tart lovers mistake for the traditional puff pastry variation. She calls it a “kortpad” (shortcut) recipe which uses sour cream instead of butter. Where the puff pastry tart asks for butter, water and lemon juice… the sour cream recipe uses a bit of butter, cream (butter + water) and vinegar (acidity, like lemon juice).

“I use fresh cream and speed up the souring process myself by adding vinegar. It makes for a beautiful pastry that’s crusty and flaky, without the hard work of layering puff pastry.”

Berna’s shortcut recipe embodies how the real, old bakers of milk tart learned to adapt when time constraints made it impossible to dedicate an entire day to creating the dish. Before shop-bought pastry was a thing, modern bakers needed to be inventive to have their milk tart and eat it, too. Plus, the sour cream probably needed to be used and this recipe provided the perfect solution.

The evolution of the milk tart didn’t stop there. Nowadays, shortcrust milk tart with its cold-set filling is perhaps the most attainable and prominent on South African home-industry shelves and in our catering industries, mainly because it’s easier.

Traditionally speaking, this type of milk tart is often ascribed to Afrikaners’ Dutch heritage. Legend has it that it was introduced to our food culture by Dutch dairy farmers who settled in the Cape of Good Hope in the 1600s.

It’s the recipe my family makes and my gran has it down to about 10 minutes in the microwave, poured over a quick shortcrust pastry that’s blitzed in the food processor. Milk tart in minutes. It’s much easier (and cheaper) than repeatedly rolling out and cooling down layers of puff to incorporate an entire block of butter with the aim of achieving a crumbly flake.

“Melktertjies” are the fast food version of the cooked classic, thrown together with a dash of vodka, condensed milk and lashings of ground cinnamon. Then there’s “Melkkos”, a meal in itself particularly loved by boarding school-goers who enjoyed this makeshift milk tart meal every Thursday evening during winter (the week’s milk supply had to be used up and melkkos provided the perfect opportunity).

Microwave milk tart is easy and satisfying but oh, there is something to be said about the puff pastry labour of love. Which brings me back to Tant Helie’s winning puff pastry perfection.

I’ve made my shortcrust family recipe more times than I could count but never tried making milk tart the “old-fashioned” way. So, it was time. I sacrificed a block of farm butter with a quick prayer and started kneading. Then the rolling.

Every hour for five hours, I carried the developing pastry – along with the butter, grater and a wet kitchen towel – from the fridge to the workstation and back. Making the filling had to be orchestrated to coincide with the pastry’s last fold. The day’s work culminated with a mere 20 minutes in the oven, blasting at top temperature.

The result transcended what I initially thought milk tart to be. Not because of the delicious amalgamation of butter, milk and a bit of sugar. Rather because I felt a connection to the milk tart forerunners who – from the most basic of ingredients – created something so delightful for their families to relish.

Whatever your fancy, there is a milk tart for you. And it’s okay to have many favourites.

“There’s no need to be a purist about it,” Sophia says. “It’s more about what this iconic South African dish accomplishes… it creates an opportunity for people to spend time together, to share their food stories and memories.” DM