Searching for Undecideds and ‘Why Vote at Alls’, ANC, DA and IFP find discontent grows deep 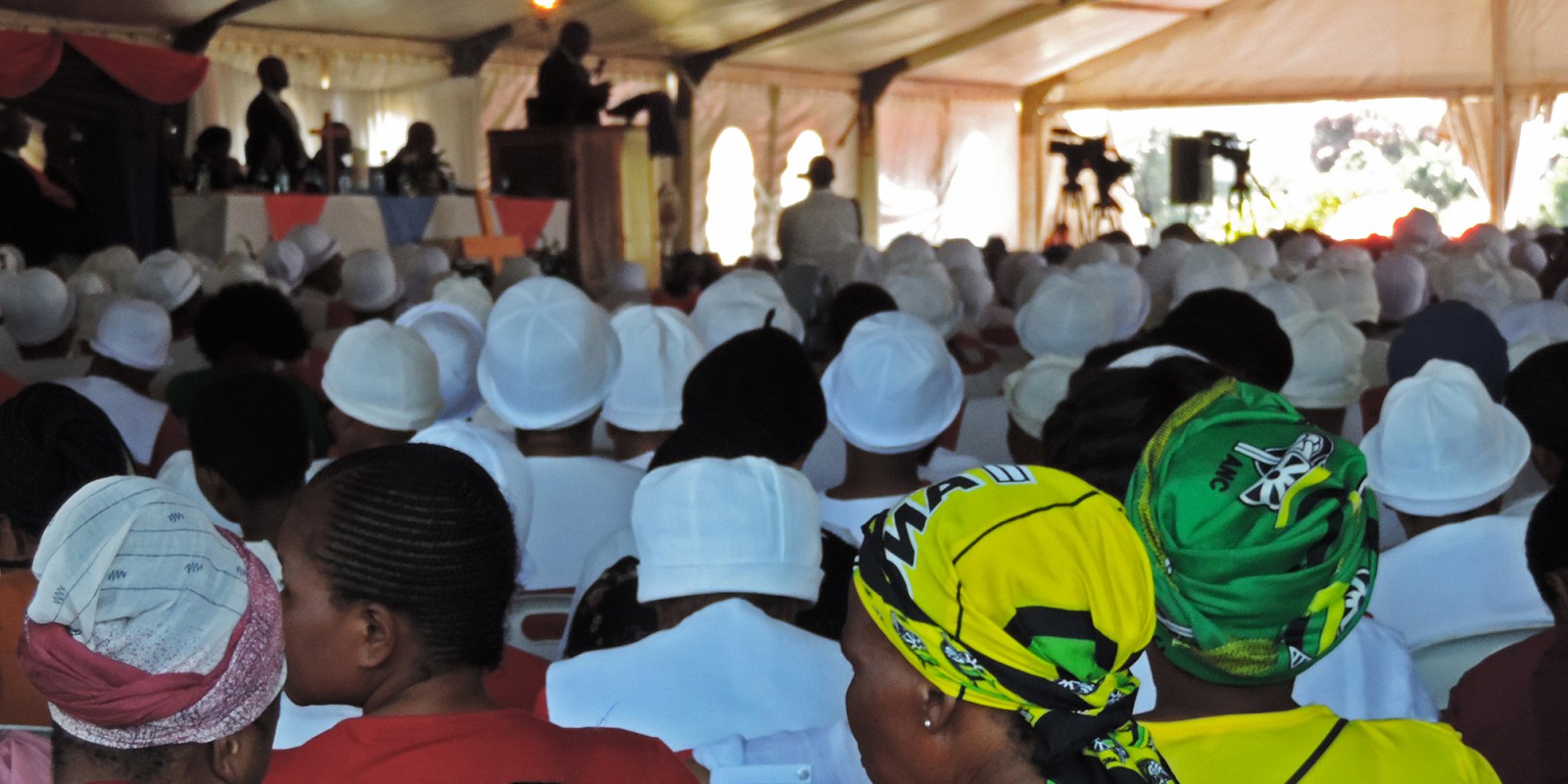 With the 8 May elections approaching fast, political parties ramped up campaigning in KwaZulu-Natal. The ANC, IFP and DA spent the long weekend heading into communities, hoping to connect with undecided voters and those wondering if it’s worth heading to the polls at all.

With just over two weeks until the national elections on 8 May, parties are using every opportunity to campaign. The Easter weekend saw concentrated efforts in KwaZulu-Natal (KZN) to try to sway any voters who may remain undecided.

The province has previously been an African National Congress (ANC) stronghold, winning 57% of the vote in the 2016 municipal election. Yet, with concerns around the volatility of the 2019 national election, many are unsure if the party will retain its dominant position.

Daily Maverick followed three different parties on their campaigning over the long weekend.

The DA campaigns in a Durban informal settlement

“We’d rather not vote,” Phumlile Sihlopo told Daily Maverick. “I voted in the last two elections, but this year I’m not going to go.”

“They (politicians) keep bringing us empty promises. Once we get RDPs (government subsidy housing) then we will vote every year.”

Sihlopo, 37, lives in the Lacey Road informal settlement, located in Sydenham, Durban. She has been there for 15 years, since moving to KwaZulu-Natal from the Eastern Cape. She says in that time there has been “no progress”.

The community was the site of Democratic Alliance door-to-door campaigning on the afternoon of the public holiday, Easter Monday, 22 April. Three members of the DA — ward 31 councillor Chris Pappas, ward 27 councillor Martin Meyer and Charmaine Clayton — spent an hour walking around handing out pamphlets and greeting residents.

The area, nestled between a building material supply store and a private hospital, is part of eThekwini Ward 31, where the Democratic Alliance won 64% of the votes in the 2016 municipal elections.

Despite being located on government-owned land, the municipality has been slow to develop it, Pappas told Daily Maverick. The initial plan was to build 146 housing units on the land, but it has been almost 10 years and there has still been no development.

“This is what State Capture and living in a gangster state means for regular people here every day, this is how it affects their lives,” Pappas said gesturing at the rows of informal dwellings.

“Since I stayed here, they keep saying the housing is coming when it’s time for voting, but then there is no change after,” Cindy Zulu, who has lived in the community for 10 years, told Daily Maverick. Zulu was an ANC supporter and voted for the party in previous elections, but in 2019, for the first time, they “don’t know who to vote for”.

Another problem for the area is service delivery. There is a growing pile of garbage at both entrances to the community. The lack of roads makes the houses inaccessible for vehicles, meaning it would be impossible for an ambulance or fire truck to reach anywhere. The two entrance points were marked as collection points for rubbish to removed, but Durban Solid Waste stopped collecting trash from the area after a contract change.

In between the nearly 200 housing structures on the property runs a stream of water pumped through the land from a neighbouring apartment building’s sewage system. There are also deep puddles where the water has collected, such as outside the creche at the Randles Road entrance.

“The young children, when attending creche, have to jump over the dirty water. What kind of life is that?” asked Pappas.

Pappas said the apartment building’s waste management system was illegal. It was not permitted to dump waste into the community. He said they were working to address the problem, as it posed “serious health risks” for residents.

“We are struggling because of the water that flows through our houses,” said Bongani Radebe, a resident from the Lacey Road informal settlement.

Radebe took Daily Maverick to a neighbour’s dwelling where a baby had become infected, apparently because of the water.

“There’s a three-month-old child that lives in this house. She had sores on her face,” he said.

“There’s a lot we complain about, but nothing gets done.”

“Because of voting everyone comes around here; this is the 50th one that’s come around talking to us,” Trudy Ahmad, 42, told Daily Maverick.

“No matter who you talk to, nothing will get done and then we won’t see them again for the next four years. I don’t want to vote because I don’t know what to vote for.”

Ahmad has been a resident in Northdale, Pietermaritzburg, for 10 years and looks after her father, Raphael, who is bedridden after a stroke. She was one of the houses visited by the Inkatha Freedom Party during its door-to-door campaigning which began in Northdale on Saturday, 20 April.

About 30 party members, including IFP Chief Whip in Parliament Narend Singh and member of the provincial legislature Les Govender campaigned in predominantly the Indian areas of Pietermaritzburg — including Northdale, Bombay Heights, Orient Heights, Raisethorpe and Allandale.

The party held its provincial manifesto launch earlier in the week, also in Pietermaritzburg, on Thursday 18 April.

The areas visited are part of the Msunduzi municipality, where the ANC won 66% of votes in the 2016 municipal elections. However, the wards visited by the IFP had the majority won by the DA, with the IFP garnering only around 1% of votes.

Still, Singh was not deterred by a lack of support in the area, saying that the IFP “had not been very active” in campaigning there before. He said the areas were chosen because “residents asked us to come” and the IFP had selected areas where they knew voters were undecided.

“People are looking for something new, they want a change,” said Singh.

“We are under no illusions that we’re going to win majority seats, but we want to be strong enough to influence policy,” Singh told Daily Maverick. “All I’m doing is just igniting the fire so the local leaders here can take it and run.”

A key issue for Northdale residents was lack of service delivery, in particular, garbage collection. Lotus Road, where Ahmad lives, was lined with black refuse bags despite the fact that it should have been collected two days previously.

She, along with other residents, say that this happens frequently where “we have to deal with the smell of garbage in the air for days”.

Vijay Harilall, another Northdale resident, felt that Pietermaritzburg was the “filthiest town in the country”.

Zodwa Ndlovu, a worker at a fruit and vegetable stand in Debbie Place, a market in Northdale, said she will vote, but doesn’t trust that her vote will make a difference.

“It doesn’t matter. Once they’ve won, they forget about us on the ground,” she said.

The ANC campaigns in church on Good Friday

On Good Friday, 19 April, the ANC continued on its campaign trail at churches in KwaZulu-Natal, the home turf of former ANC president Jacob Zuma. Zuma has also been deployed to campaign in the province, this weekend in the northern parts of the province.

More than 2,000 congregants, some dressed in traditional red and white garb, were present at the Methodist service on Friday morning which took place within a large white tent on the Nombuso High School grounds. The service was overseen by the Presiding Bishop of the Methodist Church of Southern Africa, Bishop Zipho D Siwa.

“May you be an agent of peace,” said the bishop, as he addressed Ramaphosa from the pulpit.

Outside, two large hippos stood on either side of the tent. Tight security, meant that congregants were also required to pass through metal detectors before entering the place of worship.

According to an article published in Daily Maverick, churches enjoy the highest levels of trust across the country. A church and its membership hold an influential position in South African society.

Both Zikalala and Ramaphosa were called to receive prayer from the Presiding Bishop. Afterwards, Ramaphosa, in his capacity as ANC president, addressed the congregation shortly before the service ended. He highlighted that the ANC was founded 107 years ago in a Methodist church and charged congregants to pray for the party.

“Keep praying for the ANC and the government, that they may continue with the work of 1994,” he said.

He emphasised that should the ANC take the majority in the upcoming elections, the party planned to eradicate “poverty, inequality and unemployment”.

According to the 2016 Municipal elections results, the region had 5,627 registered voters of which just above 60% cast their votes — 48% voted for the ANC while 46% voted for the DA. The remaining votes went to the African Independent Congress (AIC), EFF, Freedom Front Plus (FF+) and the IFP.

According to the 2016 Community Survey, the average annual household income in the area is R29,400, an amount earned by just above 20% of the population.

More than 48% of the population are employed, while 13% are unemployed. The remainder are either economically inactive or are discouraged work-seekers (those who have given up looking for employment).

The area surrounding the high school primarily has dirt roads. Amos — who provided only his first name — a community member from Nzimakwe, commented that the main dirt road leading up to the high school had been repaired for the president’s arrival. Driving down the auxiliary dirt roads, it was evident that they were poorly maintained, riddled with rocks and potholes.

“The Bishop spoke to me and said, ‘President, do you see that we need new roads?’ ” said Ramaphosa as he continued his address to the church.

After the service, Ramaphosa met traditional, religious and business leaders as well as activists at the St Michaels Sands Hotel in Margate. DM