As politicians hit the churches this weekend to win end...

As politicians hit the churches this weekend to win endorsement for their crosses, we find that church-based parties are doing better than before 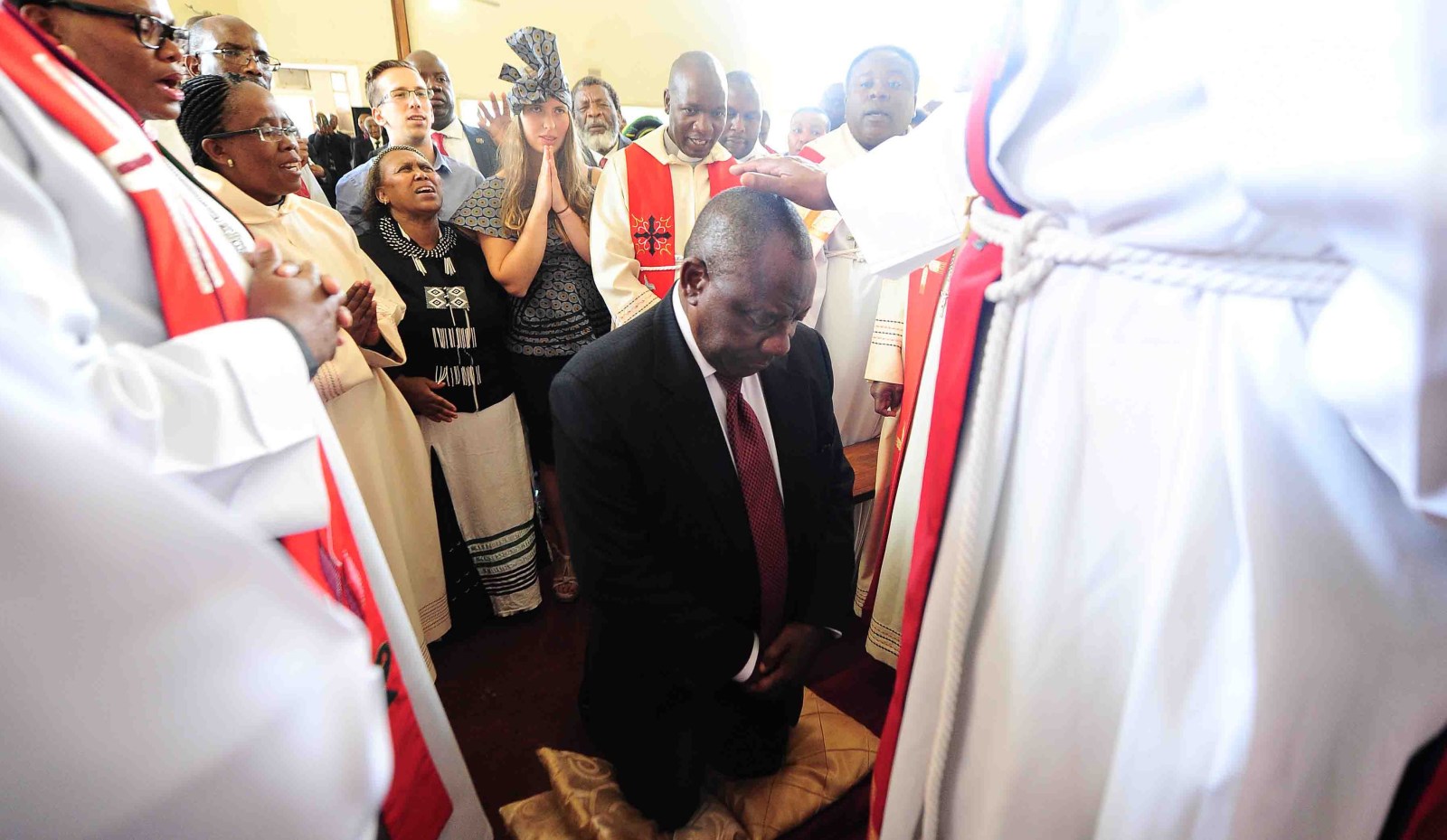 File Photo: Then deputy president Cyril Ramaphosa is prayed for at the Evangelical Presbyterian Church of Southern Africa in Chiawelo during his visit on December 07, 2017 in Soweto, South Africa. (Photo by Gallo Images / Sowetan / Thulani Mbele)

Political leaders will swoop on churches this Easter weekend as an endorsement from religious leaders is manna from heaven, but this time they may face tough questions.

South Africa is a profoundly religious country with 44-million people identifying as Christian in the General Household Survey of 2013. The major political parties will all call in on churches this weekend. On Good Friday and on Saturday, President Cyril Ramaphosa will stop at three churches and hold an additional meeting with religious and traditional leaders as he hits the campaign trail in KwaZulu-Natal. His deputy, David Mabuza will attend the Easter Sunday Pilgrimage at Moria, Limpopo.

Democratic Alliance leader Mmusi Maimane is a part-time pastor and is likely to be at the pulpit this weekend. EFF leader Julius Malema’s plans changed and were not available at the time of writing.

It is a religious weekend across faiths: for Jewish people, it is Pesach (Passover) while Muslim South Africans gather for a weekend of prayer too.

“Christians are organised in churches (and also denominations and congregations) and churches appear consistently to enjoy the highest levels of trust across the country, with four or five South Africans indicating that they either (trust) or strongly trust churches.  This places the Church and its membership in an important position to have an influence on the South African society,” writes Willem J Schoeman of the Department of Practical Theology at the University of the Free State in the article South African religious demography.

In the churches, South Africa’s decade of kleptocracy has met pulpit opprobrium.

One of the factors which turned around the politics in the ANC from the State Capture of former president Jacob Zuma to the reform Presidency of Cyril Ramaphosa was a campaign against State Capture started by Bishop Malusi Mpumlwana, the general-secretary of the South African Council of Churches (SACC).

In the final days of Zuma’s administration, he turned the SACC into a weapon of moral outrage against what was happening in the governing party in political partnership by offering religious and political cover to ANC members who began to speak out about their personal experiences of State Capture. It returned the churches to activism reminiscent of their role in the anti-apartheid era. The same thing happened in mosques and temples too.

There are three overtly religious parties in South Africa and the oldest, the African Christian Democratic Party (ACDP) says it is benefiting from people’s unhappiness with organised politics’ various and regular moral lapses.

The ACDP’s election manager Grant Haskin says they have had a surge in membership, notably in the Western Cape “from a few thousand to (about) 50,000 members”.

DA members appear to be looking for a new home, but young people who belong to churches have also signed up to the ACDP. Churches have been more open to the ACDP, says Haskin who also says the party has benefited from the attempts by Commission for the Promotion and Protection of the Rights of Cultural, Religious and Linguistic Communities to regulate churches after the antics of charismatic churches.

“The message of the churches has been that we must unite and get behind (political) leaders who are the embodiment of integrity and who are not corrupt,” says Haskin.

The Reverend Kenneth Meshoe, who heads the ACDP and who sits in Parliament with just two other MP’s, is a popular politician. Haskin says the new attitude they have found among church leaders is that: “We pray for leaders who are trustworthy yet we vote for leaders whose track records are the opposite. You have to link your values with your vote.”

The party has attracted memes for its acronym, but when it won 30% of votes cast in the Eastern Cape ward of Nyandeni in a March by-election, commentators sat up and took notice.

Party leader Vuyo Zungula told Daily Maverick: “The election campaign is going quite well. We are getting a positive response; people have been disappointed for a very long time by politicians with deceit, lies and corrupt people.” The ATM is running a national campaign.

Over the Easter weekend, ATM members are flocking to churches it is affiliated with like the Nazarene Baptist church which has three million members and the Twelve Apostle Church in Christ with its 6.8-million members. Political analyst Lukhona Mguni told a Daily Maverick Insiders meeting in February that the party could be a surprise card in the election because of its alignment with powerful churches.

The third religious party registered for the election is the Al Jama-Ah Muslim party organised by Ganief Hendricks. It has run before but not succeeded.  There are just over one-million Muslims in South Africa, according to the General Household Survey of 2013, with their political support going either to the ANC or to the DA. DM