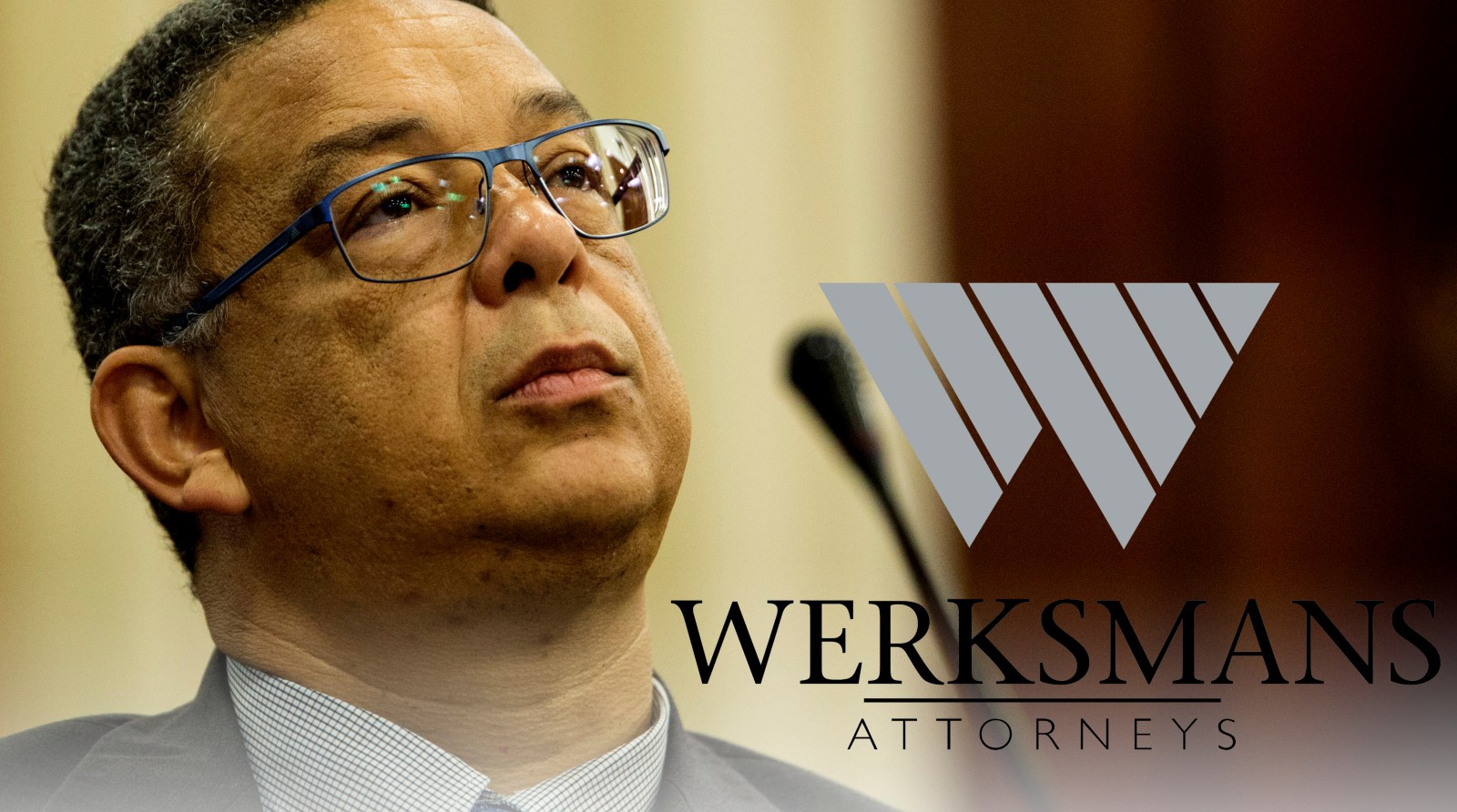 Former IPID boss, Robert McBride, tells the State Capture Commission that Werksmans was ‘obsessed’ with two conflicting reports and allegedly much less concerned with red flags that had informed a decision not to prosecute former Hawks bosses, Anwa Dramat and Shadrack Sibiya.

Implicated parties from Transnet to Prasa and SARS have all felt the heat of the Werksmans’ precision factor, but now the tables have been turned on one of South Africa’s reputable law firms.

Robert McBride has a bone to pick with Werksmans and it goes back to this line in a 74-page report the firm gave former police minister, Nathi Nhleko, in April 2015:

“We recommend that Khuba, McBride and Sesoko be criminally charged for defeating the ends of justice or obstructing the administration of justice, and that disciplinary charges be brought against them…”

McBride, the then head of the Independent Police Complaints Directorate, lead investigator Innocent Khuba and Matthew Sesoko, the unit’s national head of investigations, were all suspended following the law firm’s investigation into two conflicting reports relating to the so-called renditions case that ultimately claimed the scalps of former Hawks bosses, Anwa Dramat and Shadrack Sibiya.

Werksmans had failed to take into account key factors about why IPID’s January 2014 report to the National Prosecuting Authority differed from one submitted about three months later.

The IPID investigation had sought to uncover wrongdoing in a 2010/2011 case during which the Hawks arrested and handed five Zimbabwean nationals over to authorities in that country, two of them later dying as a result.

The first report had recommended criminal charges against Dramat and Sibiya, the second, billed a final report, was completed once McBride was appointed and came to a drastically different conclusion – this time, that the evidence did not support a prosecution of the two generals.

Despite being provided with a copy of the final report, Nhleko relied on the initial “preliminary” report to suspend Dramat and Sibiya and then hired Werksmans to investigate the circumstances around which the recommendation to the National Prosecuting Authority had been changed.

Testifying at the State Capture Commission for a third day on Monday, McBride made no bones about his beef with Werksmans. They got it wrong, he testified.

The firm’s lead investigator, attorney Sandile July, has been served with a 3.3 notice, usually issued to parties implicated by witness testimony.

Werksmans has become renowned for its work in uncovering large-scale corruption and wrongdoing at public sector entities like the passenger rail agency, Prasa, Transnet and matters related to the purge of senior Sars officials.

During his testimony, McBride said the Werksmans investigation was set on the two conflicting IPID reports and not whether the factors that had resulted in the new recommendation not to prosecute Dramat or Sibiya had been lawful.

“That was not an issue to anyone,” he said.

McBride says once the controversy over the two reports started, IPID had senior counsel consider it and they also consulted with then National Director of Public Prosecutions, Mxolisi Nxasana.

To date, nobody has questioned the validity nor the merits of the of cellphone analysis, a crucial factor in IPID’s decision that the case couldn’t be prosecuted, McBride said.

He confirmed that he later became aware that Khuba, under pressure from NPA prosecutor, Anthony Mosing, and bizarrely, the then deputy provincial commissioner of police in Limpopo, Berning Ntlemeza, submitted the initial recommendation to the NPA.

Ntlemeza had allegedly pestered Khuba to get the report to the NPA, telling him that he was “holding up” his (Ntlemeza’s) progress.

As soon as Dramat resigned amid the scandal, Ntlemeza replaced him as head of the Hawks.

McBride told the Commission that Khuba submitted the initial report but had explained that there was further evidence, including cellphone analysis, still to come.

And, significantly, McBride said upon his arrival as the Executive Director of IPID, he realised that the investigation had been “compromised” because the docket had been prepared by members of the police’s Crime Intelligence unit – thereby impacting on the requirement for IPID to conduct an independent investigation.

In addition, Khuba had been told to work with Crime Intelligence and to keep his immediate superior, Sesoko, in the dark.

As a result, he had his team review the evidence and this, coupled with the new evidence, had brought about the second, final recommendation to the NPA.

Portions of the initial report that did not make it into the final one were not of “evidentiary” value and McBride testified that it was worrying that the ultimate focus of the Werksmans investigation was on the two conflicting reports only.

“There were lawyers involved on the prosecutions side (the NPA), during the disciplinary hearings of the IPID officials and during the Werksmans investigation. Surely the value of evidence, their judgment of evidence, that exculpatory evidence could not have been omitted or disregarded,” said McBride.

The Werksmans report “was materially flawed” and was used by Nhleko to legitimise the case against him, Khuba and Sesoko. McBride told the commission.

“That report became the basis upon which we were charged,” McBride told the commission.

Dramat, Sibiya, McBride and his colleagues were all slapped with criminal charges ranging from kidnapping, and defeating the ends of justice, until those were eventually withdrawn.

His issue with Werksmans does not necessarily fall within the scope of the State Capture Commission but it took up much of his testimony thus far.

The commission is investigating allegations of fraud and corruption in the public sector and the hiring and firing of members of the Executive or senior government officials.

It is widely believed that the ousting of McBride, Dramat and Sibiya had been part of a broader plot to capture the country’s law enforcement agencies.

Dramat, at the time of the investigation, had just centralised several sensitive investigations at the Hawks, among them the case of former president Jacob Zuma’s Nkandla homestead.

McBride said IPID’s independence is guaranteed by the Constitution yet Nhleko saw it fit to appoint a private law firm to scrutinise its work.

He said he had raised serious concerns during an interview with Werksmans and flagged issues that had never been disputed, such as the new evidence and the involvement of Crime Intelligence.

“I had expressed to Mr July the absurdity of placing reliance on the preliminary report in view of the outstanding information.

“But there appeared to have been an obsession with the mere existence of the initial report.”

McBride says IPID never sought or tried to hide the original report. It in fact formed part of a sealed bundle containing the full docket that was handed to Nhleko in November 2014.

The only changes made in the final report were those that were either irrelevant or which would not have withstood legal scrutiny, he said.

Yet, Werksmans created the impression that evidence was deleted or created by the IPID team to get Dramat and Sibiya off the hook, he testified.

McBride said it was not healthy that a private entity, such as a law firm, could be assigned cases that ultimately impugned the independence of constitutional bodies such as IPID.

The NPA had not even made a decision about whether to accept IPID’s recommendation and yet the Werksman’s report served to push Nhleko into swift action.

Commission chairman, deputy chief justice Raymond Zondo, asked McBride if there was anything in Khubu’s first report that showed it was not a final recommendation from IPID.

McBride said the NPA’s advocate, Anthony Mosing, had written to his boss at the time saying there was still outstanding information.

Mosing had also sent Khuba an email, several weeks after he had received the initial report, to suggest Khuba pulled the new information and evidence into the docket.

This, says McBride, shows that neither IPID nor the NPA at the time considered the investigation to have been concluded, as Khuba continued working the case.

Yet this did not appear to have been taken into account during the Werksmans investigation, he said.

Justice Zondo asked McBride whether he had ever asked July about the point of the Werksmans investigation, in view of the new evidence that had caused the changed recommendation to the NPA.

Said McBride: “I indicated to him that I stand by the final report and that no court in South Africa, based on the evidence, would ever be able to convict Dramat or Sibiya.”

His team were confident in the evidence and the analysis thereof.

“But the moment I said I stand by my report… they (the Werksmans team) all started feverishly writing. As if I had somehow admitted to shock and horror, some unspeakable deed.”

Werksmans, he said, gave no criticism of the final report.

The former soldier and death row prisoner personally funded a legal challenge to confirm IPID’s independence, all the way to the Constitutional Court, which later declared the disciplinary proceedings against him invalid, paving the way for his return to IPID after 18 months in the cold.

Current police minister Bheki Cele has opted not to renew his contract.