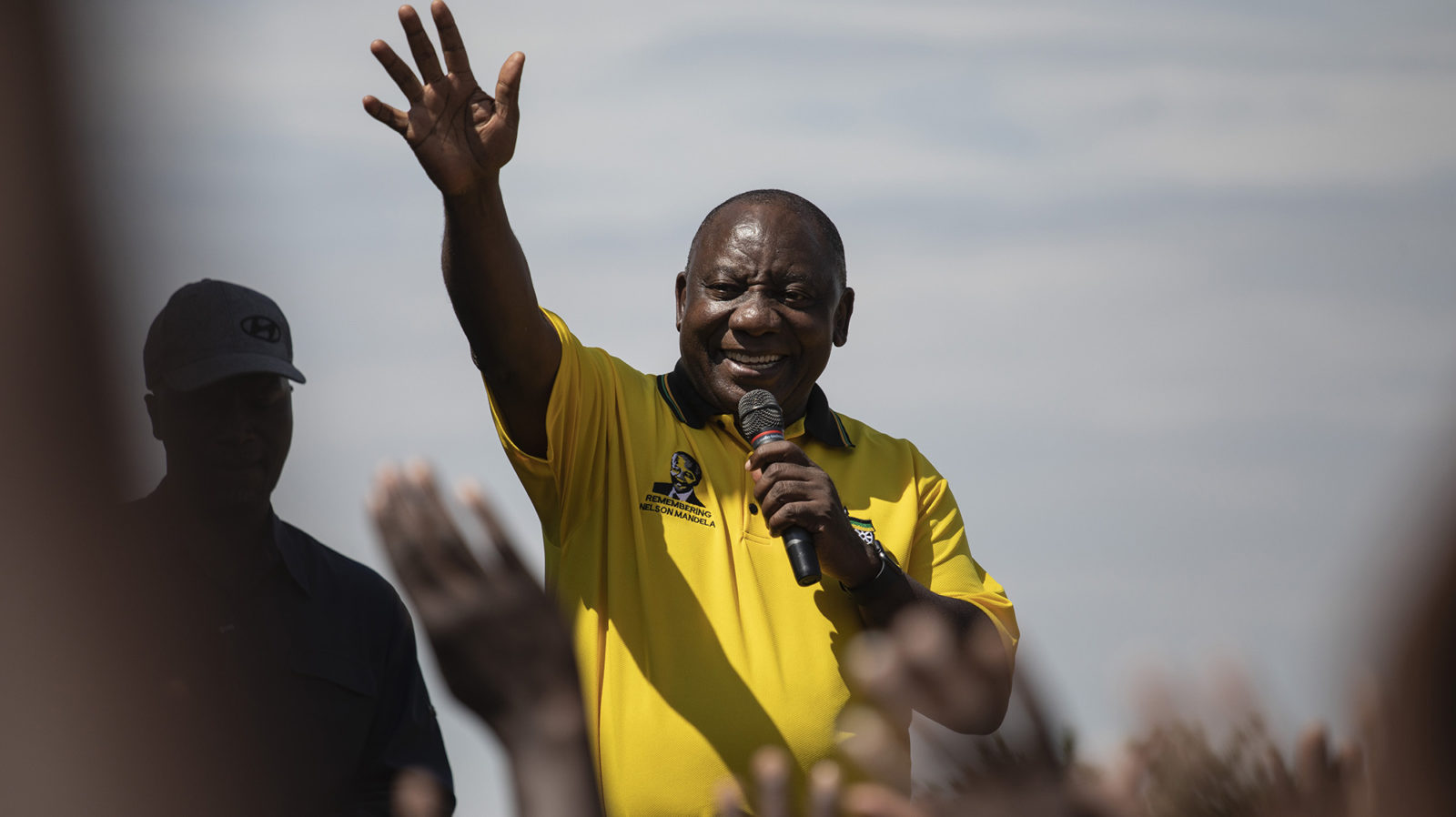 With only a month to go before the elections, the ANC is intensifying its campaign to win back voters’ trust, not an easy task when it has nominated compromised candidates to Parliament. It is also making the point that anyone on the current electoral list can be asked to ‘step aside’ – and that if asked, they would have no choice.

Speaking at the ANC’s Luthuli House on Monday, the party’s head of elections Fikile Mbalula finished reading an official statement and turned to a projector to discuss the ANC’s social media engagement statistics.

“I’m going to play you a bioscope, not exactly similar to Nkandla, but a better one,” he said, referring to the infamous video on former president Jacob Zuma’s “firepool”.

With a month to go before the 8 May general elections, the ANC is scrambling to rebuild the trust it lost during the Zuma era and trying to sell a message of renewal while issues of State Capture continue to be exposed and Zuma’s tainted allies remain prominent within the party.

Mbalula said the ANC’s campaign is focused on getting leaders into communities to interact with voters, who, he said, have told the party they don’t believe it takes decisive action on corruption.

“This election campaign is about winning the trust of the people and restoring the confidence they have demonstrated in the ANC over the last 25 years. We have been very touched by the overwhelming response of our people, both positive and negative,” he said.

Mbalula continued, “We have heard the cries of millions about things that went wrong. We accept the criticisms. South Africans have continued to place their trust in the ANC yet demand that we demonstrate our commitment to righting the wrongs of the past through tangible action.”

President Cyril Ramaphosa is the face of the party’s message of renewal and hope, which has been limited by the ANC’s list of candidates for the national and provincial legislatures. On the national list are a number of leaders accused of corruption and incompetence, including Bathabile Dlamini, Nomvula Mokonyane, Mosebenzi Zwane and Malusi Gigaba.

The ANC’s integrity commission has been tasked with vetting the lists. Despite having already submitted them to the Independent Electoral Commission (IEC), which has said they cannot be modified, Mbalula maintained changes can still be made.

“The list is not cast in stone. You can be removed and the next person comes in,” he said.

“If the ANC says step aside, it’s not negotiable. You have to step aside,” said Mbalula.

“The ANC is determined to act. Who has subjected their list to an integrity commission in this country except for the African National Congress?” he asked.

ANC spokesperson Dakota Legoete said members must comply with the integrity commission’s rulings and step aside if instructed.

The IEC on Tuesday will announce its findings on objections to candidates nominated in the party lists. It received 53 objections, over 20 of which reportedly relate to ANC candidates and raise allegations of corruption and other criminal acts.

The Constitution only bars citizens from serving in Parliament if they are either unrehabilitated insolvents, have been determined by a court to be of unsound mind, or convicted of an offence and sentenced to more than 12 months in prison without the option of a fine.

Mbalula said the ANC will testify at the State Capture Inquiry but he said it would follow the inquiry’s schedule rather than be pressured to appear in the run-up to the elections.

“The ANC never sent anyone to be corrupt. People get caught up in these acts on their own,” he said.

Mbalula acknowledged the ANC’s decline in recent elections and encouraged voters to go to the polls rather than avoid them in protest.

“Far too often, it is easy for people to believe the lie that they can stop exercising the right to vote as a form of protest against the incumbent government. Yet the opposite is true. If citizens do not vote, they allow dictators, fascists and those without the popular mandate access to the levers of power,” said Mbalula.

Gauteng structures of the ANC’s alliance partners the SACP and Cosatu on Monday briefed the media on the run-up to the elections.

SACP Provincial Secretary Jacob Mamabolo said the ANC has to get its voters to the polls.

“With what we have seen in 2016, people not going to the polls, that is what we are going to deal with. We must also indicate that the lesson we learnt in 2016 is that our presence as an alliance at the voting station to support voters was very weak,” said Mamabolo.

“For the first time, the ANC has agreed that the candidate list that has been submitted to Parliament and provincial governments, with questions being raised in that regard, that the commission of elders must peruse that particular list. I don’t think that there is any organisation that has taken such a bold decision,” said Dakile.

Mbalula said the party would intensify its door-to-door campaigns in the final push before the elections and deploy its leaders across the country. The party’s Siyanqoba Rally, its final push for votes, will be held on 5 May at Ellis Park Stadium. DM