A Budget lesson from fertilising plants 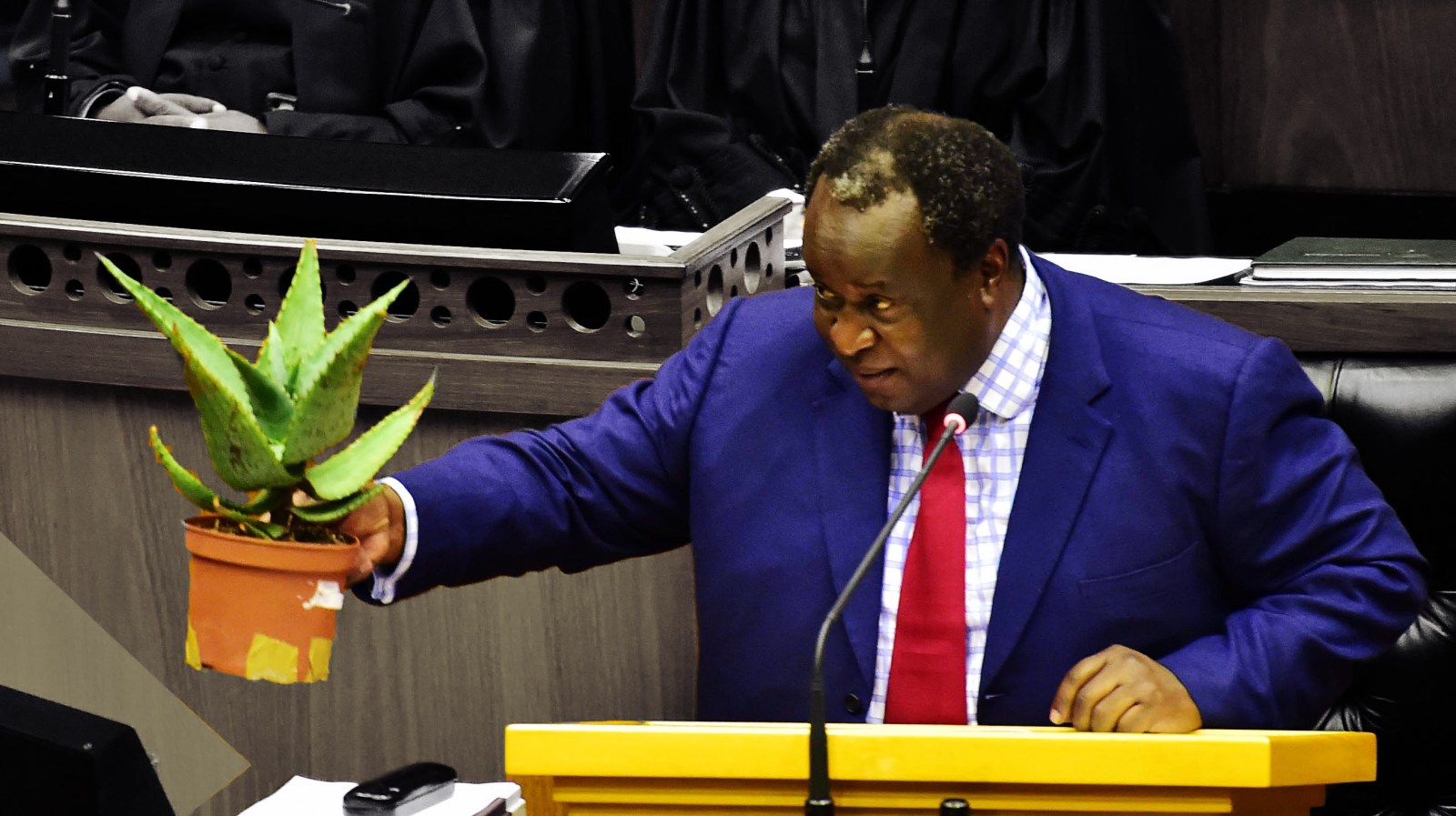 Tito Mboweni’s first Budget was designed to please the mainstream but others will argue it was too conservative and too focused on cutting spending in a way that could contract us into deeper economic stagnation.

Mboweni pointed out the plant had “a long history of medicinal use. It is resilient, sturdy and drought resistant”. In other words, it was symbolic of a hard-times Budget, not the first we’ve seen in recent years.

It was indeed a tough Budget, with stealth tax and fuel tax increases on the one hand and cuts to the public service wage bill on the other. Looking at that plant, I remembered a line from Athol Fugard’s play, A Lesson from Aloes.

In the play, the main protagonist Piet, an aloe collector, is concerned the roots of one of his beloved plants, confined in a tin “… are going to crawl around inside …. and tie themselves into knots looking for the space creation intended for them”.

Perhaps that’s the real metaphor for the Budget – it is too married to ideas of containment to be healthy. At a time when economists are rethinking the role of fiscal policy, ie tax and spending to spur the economy by increasing demand for goods and services, and the ideas of John Maynard Keynes seem poised for some revival, flirting with austerity seems wrong. Keynes believed that governments should not, as they did during the Great Depression, aim for balanced budgets, but borrow to inject money into the economy.

Keynesian multiplier theory says any government spending brings about a virtuous circle of spending, as the person employed with government money uses that money to pay the baker, who pays the grocer etc, creating increased employment and prosperity. A rand of government spending generates more than a rand in economic growth, as it cycles again and again through the economy, to rephrase Investopedia on the topic. In the short term, it is a powerful way of getting a stagnant economy to grow by using deficit financing, that is borrowing to finance the gap between revenue and spending.

The central bank, in our case the Reserve Bank, can also stimulate the economy by using monetary policy, i.e. lowering interest rates. If instead, the Reserve Bank raises rates this might cancel out the fiscal stimulus, so there must be co-ordination.

Governments should do the opposite to cool down an economy – raise taxes and interest rates and cut government spending.

Even former US Treasury Secretary Larry Summers has revived the idea, in an article in Foreign Affairs, of not ignoring fiscal policy as a tool to stimulate the economy, and accused Washington of being obsessed with debt.

On our home turf, the idea of using fiscal policy as a stimulatory measure did not even come up in the Budget, which focuses on structural reforms and greater private sector involvement in service delivery to grow the economy. For some time in mainstream economic circles, fiscal policy has been regarded as of little use in managing demand in the economy, particularly as it takes time to manifest its benefits.

Vishnu Paddaychee, a professor in the School of Economic & Business Sciences at Wits University, believes the times are changing, that Treasury is “stuck in the early 90s” with a local version of the Washington Consensus and that fiscal policy, co-ordinated with monetary policy, should be used to manage demand in an economy. He has written a paper, Beyond a Treasury View of the World, expanding on the heterodox world view, which would support a more active fiscal policy.

Against, the background of Treasury’s conservative thinking, it should not have been a surprise that the public sector wage bill was cut. The Medium-Term Budget Policy Statement (MTBPS) in October last year set the stage, with an annexure devoted to public servant wages. In that annexure, the Treasury pointed out compensation of public servants was one of the fastest growing items in the Budget, increasing on average by 11.2% a year. It added that the rising wage bill means lower budgets for goods and services and capital expenditure.

The brutal arithmetic is that to maintain the kind of increases in compensation that have been the trend, the number of public servants would have to drop and continue dropping. As in the private companies, one way of paying higher salaries is to pay those to fewer people.

Worrying that wages will eat up the entire discretionary spending on infrastructure and the like in the Budget is not controversial. Paddaychee, for instance, actually backs curbing the public sector wage bill so that money can be diverted to capital spending.

Nonetheless, it is of concern that while the MTBPS discussed various aspects of the public sector wage bill in detail, quality was not considered – at least not overtly. For instance, complaints about the quality of teaching in township schools are legendary but focusing simply on the number of teachers rather than their knowledge and commitment will not change matters.

It has been pointed out that most public servants are not pen-pushers but teachers, nurses, doctors, police and those running the justice system. Nor does the number of public servants befit the adjective “bloated” at 8% of the country’s workforce.

It seems to be ironic that some people clamouring for early arrests of those accused of corruption would want fewer lawyers and for public servants who are part of the justice system to be put out of work.

While the Budget stance seems contractionary in its cutting public sector wages, spending does increase over the next three years. According to the Budget Review, real, or inflation-adjusted spending grows by on average 2% a year, after the cost of paying interest on the debt is stripped out. This is better than a decline, but is that enough?

A Keynesian point of departure would be to cut taxes and raise spending during recessionary periods. South Africa is not actually in a recession though it might as well be. Growth is forecast to be below 1% for last year. We tend to track the slower-growing developed world in our growth path rather than the faster-growing developing nations, but recently the gap between our growth and the developed world has been increasing.

At the same time, the South African Reserve Bank most recently announced an increase in the repo rate, the interest rate that influences all other rates. Monetary policy, if not contractionary is not expansionary either, especially when the interest rates actually paid on loans is taken into account. The gap between the repo rate at 6,75% and the prime rate, the rate banks supposedly charge their best customers, is 3,5 percentage points, a gap the banks stick to, and the wideness of which Mboweni questioned when he was Reserve Bank governor.

So how much room do we have to manoeuvre? According to some voices, the rating agencies are just waiting to downgrade their credit ratings on our sovereign bonds, leading to higher interest on new debt. There is panic about the public debt-to-GDP ratio, that our public debt measured as a percentage of Gross Domestic Product, the output-based measure of an economy’s performance.

The Budget predicts that the gross debt-to-GDP ratio, now around 55%, will climb to around 60% of GDP by 2023/24. Yet at 60% there is still room to increase spending and therefore debt, even for conservative economists. Three economists in a World Bank working paper estimate the tipping point for debt to have an adverse effect on economic growth to be above a threshold of 77% for developed economies and 64% for emerging markets. However, they state the loss for each percentage point above 64% for emerging market countries is around 0,02 percentage points! It’s worth remembering that the debt-to-GDP ratio for the US is now 106%.

Economic growth has to be much higher if we are to make any dent on unemployment – and we may well need much greater fiscal and monetary stimulus. What is possible depends on local politics and global financial forces, but we must at least debate the options.

So perhaps an aloe was the correct choice of flora – if it was on the point of withering. If the Budget had been more expansionary a flowering plant or even a bouquet of flowers – or maybe a bag of fertiliser – would have been more appropriate.

And here’s another tip for Tito. Instead of quoting Charles Dickens or the Bible, use one of the great Keynes quotes, like this one: “The difficulty lies not so much in developing new ideas as in escaping from old ones.” DM

Reg Rumney is the former director of the SA Reserve Bank Centre for Economics Journalism at Rhodes University and former head of the economics department at the SABC.