Ramaphosa, one year in: much consultation, still not enough implementation 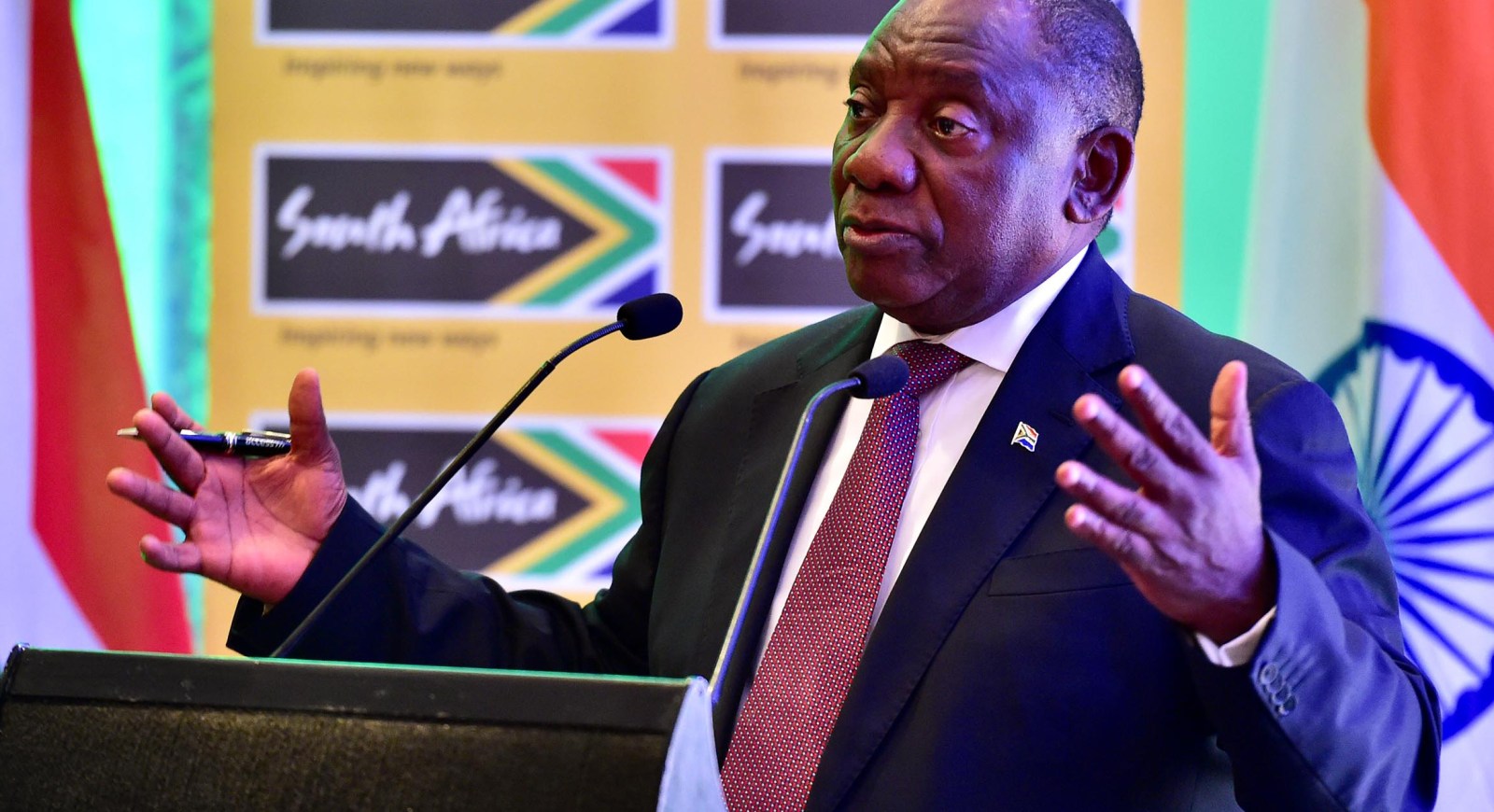 President Cyril Ramaphosa delivers a keynote address at the India-South Africa Roundtable at the Taj Palace Hotel in New Delhi, India on the sidelines of the State Visit at the invitation of Prime Minister Narendra Modi. 26/01/2019, Elmond Jiyane, GCIS

One of the hallmarks of President Cyril Ramaphosa’s first year in office has been the number of conferences, summits, colloquia, and task teams announced to help find solutions to boost South Africa’s flailing economy. While it’s encouraging to have an administration so committed to consultation to find new ways of thinking, the problem – as always – comes down to implementation.

It was also the message with which Labour Minister Mildred Oliphant had opened the summit, warning: “It is expected of us to come up with practical solutions and initiatives that are capable of being implemented immediately.”

As anyone who has worked in government will tell you, South Africa’s post-1994 problems have never included a shortage of promising policies. The stumbling block has been in implementing these policies – particularly in a situation where corruption has taken root at every level of government over the past decade.

President Ramaphosa’s administration has, over the course of his first year in office, revealed a pretty much-unprecedented willingness to consult widely beyond the government to find solutions to South Africa’s economic woes.

The past year has seen at least two colloquia convened by Finance Minister Tito Mboweni bringing together academics, government officials and private sector experts in a discussion on ways to grow the economy; an investment conference; a jobs summit; and projects such as the Public Private Growth Initiative.

The openness of Ramaphosa’s administration to advice and suggestions should be welcomed, following as it does one president notoriously hostile to outside counsel – Thabo Mbeki – and another president prone to making disastrously self-serving economic decisions on the hoof – Jacob Zuma.

As always, however, the proof of the pudding is in the eating – and thus far, there isn’t too much pudding to go around.

It concluded with the signing of a framework agreement which explicitly cautioned that “one of the deficiencies of previous summits and agreements has been the failure to monitor implementation”.

To avoid this, the summit pledged to establish a Presidential Jobs Committee – referred to by Ramaphosa as the “brains trust” – with a joint technical sub-committee. It also promised that “within two (2) months of the Jobs Summit, business and government will establish Rapid Response Teams (RRTs) of experts to assist businesses in crisis during this current economic climate”.

To date, more than three months after the summit, there has been no indication of any progress to this effect.

In September 2018, meanwhile, Ramaphosa announced the establishment of a R400-billion South African Infrastructure Fund as the centrepiece of his economic stimulus package. Expanding South African infrastructure, he said, held the potential to “create jobs on a large scale” and attract investment.

Exactly how the fund would be financed was never made clear, though it is intended to blend public and non-governmental funds.

At the time of the fund’s announcement, Ramaphosa invited the private sector to “enter into meaningful partnerships with government”.

The call to both foreign and local investors to plough their money into South Africa has been amplified to a deafening degree in Ramaphosa’s first year in office. The president himself has tirelessly toured the globe touting for investment – without which, it is clear, economic renewal is seen as a distant dream for South Africa.

Ramaphosa has set himself the ambitious target of raising $100-billion – about R1,4-trillion – in new investments over the next three years. This pledge was made a key feature of the ANC’s election manifesto at the party’s January 8th birthday celebrations.

The Presidency says that $20-billion has already been raised – but, again, details are vague.

Ramaphosa returned from Saudi Arabia mid-2018 with the news that a $10-billion investment was forthcoming. It was only in January 2019 that the picture was fleshed out somewhat, with Minister of Energy Jeff Radebe announcing that the investment would take the form of a new crude oil refinery and petrochemical plant.

As much as Ramaphosa’s administration thirsts for foreign money, however, the reality is that foreign direct investment comes with many potential pitfalls for its recipients.

One is its impact on South Africa’s foreign policy direction, with Pretoria already assumed to be castrated when it comes to criticising human rights violations stemming from Jeddah.

Another is that bending over backwards to accommodate foreign business in South Africa can lead the government down dangerous paths. Watching Ramphosa in Delhi on his recent state visit assure Indian businessmen that challenges around securing visas could be easily overcome, it was hard not to be reminded of another Indian family that had had the red carpet rolled out for them by a previous administration – ostensibly on the basis of the jobs they could provide.

A third challenge around foreign investment is in the conflict it will inevitably present on some occasions with the ANC’s developmental mandate. Parliament’s portfolio committee on labour already warned, after the Jobs Summit, that “South Africa is a developing country and cannot afford to fully liberalise its entire economy, and needs to protect some of the industries against competition from outside big industry players”.

How this will be reconciled with Ramaphosa’s assiduous courting of foreign business remains to be seen.

The issue becomes heightened in a context in which the government is not fully transparent with the public about what forms foreign investment will take. A cautionary tale is found in the ongoing dispute involving mining in Xolobeni, with the previous administration – despite official denials – appearing to have assured an Australian miner that its proposed Wild Coast development could go ahead without consulting the communities involved.

Against this backdrop – together with the infamous Russian nuclear deal – Ramaphosa’s administration owes it to the South African public to be transparent about the details of the foreign investment deals it is entering into. Talk is cheap; implementation, often pricey.

This may be a moot point, however, as it has already become clear that many foreign investors require some degree of concrete assurance that South Africa’s state-owned albatross, Eskom, is not about to collapse entirely.

This is an assurance that Ramaphosa’s government has not yet been able to give.

In Davos, Ramaphosa said: “In the next few weeks, we will be announcing a set of measures to stabilise and improve the company’s financial position and to ensure uninterrupted energy supply.” He was likely referring to the report of the Eskom Sustainability Task Team, which was “requested” by the Presidency to submit its findings by the end of January.

Until a promising plan is announced – and more importantly, implemented – to deal with Eskom, economic growth of the kind Ramaphosa is aiming for (5%, as opposed to the World Bank’s prediction of 1,3% for 2019) will remain a distant dream.

February will be a critical period for Ramaphosa’s administration. The Mining Indaba will test investors’ confidence in the new Mining Charter, SONA will give the president the chance to tell South Africa what social and economic progress is being made, and the Budget will spell out the country’s financial situation.

For all the optimistic talk of renewal and growth, this is where the rubber meets the road. DM