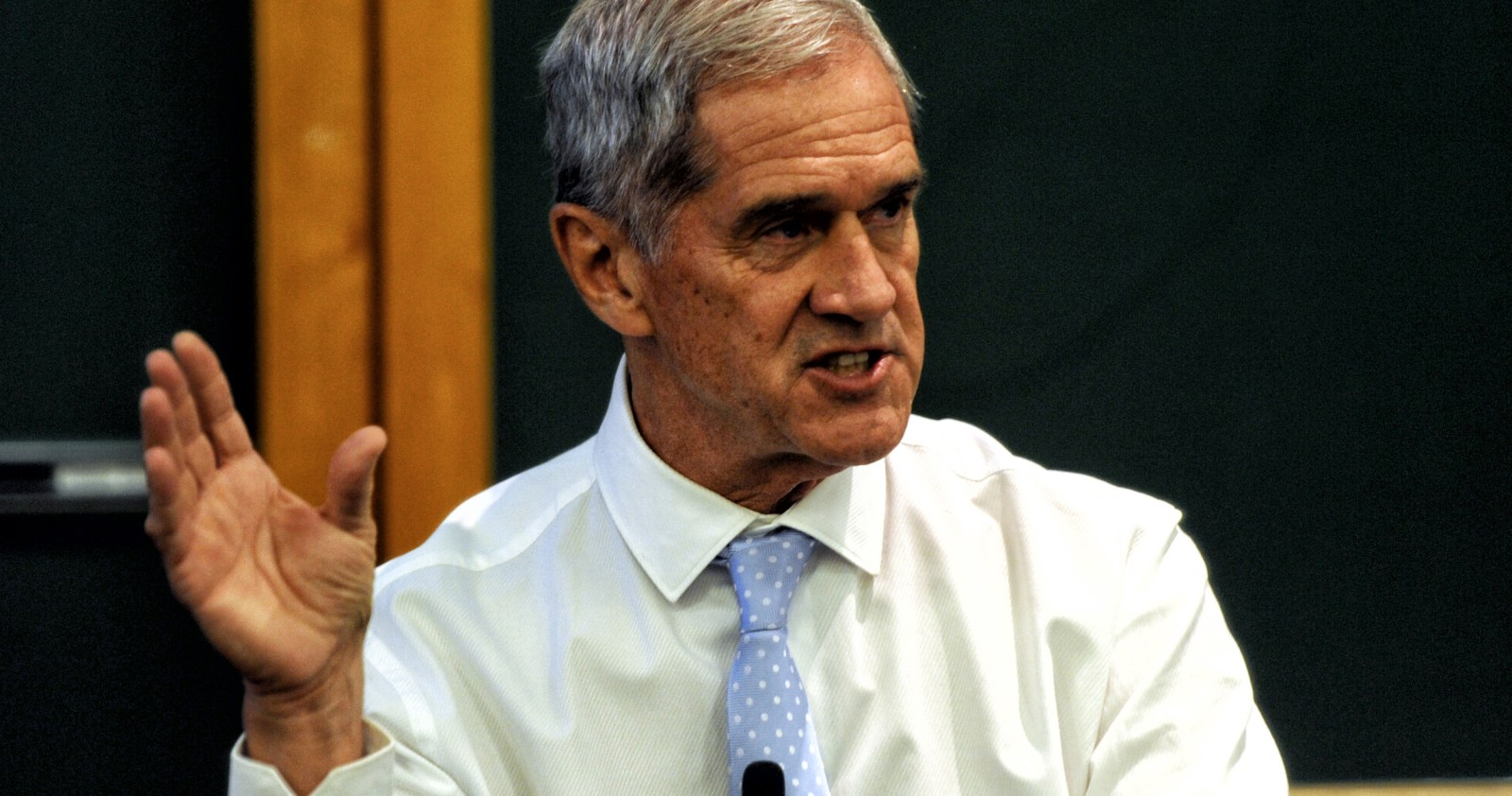 Roelf Meyer during the 3rd Land Reform Imbizo on February 26, 2015 in Johannesburg, South Africa. The ANC general-secretary, Gwede Mantashe warned farmers who were attending the imbizo of disastrous economic consequences similar to Zimbabwe if white South African' did not come on board and work with the ANC when it comes to land reform. (Photo by Gallo Images / Foto24 / Denzil Maregele)

Roelf Meyer became one of the best-known faces in South Africa during the transition to democracy when he led negotiations on behalf of the National Party with the ANC’s chief mediator, Cyril Ramaphosa. It’s 20 years since he left active politics to play a behind-the-scenes role in global conflict resolution. But Meyer is now working with the South African government once more: this time, to help jumpstart the economy.

Roelf Meyer was in Zimbabwe when Daily Maverick spoke to him on Wednesday, 30 January.

Of course he was: if a country is wracked by civil strife, chances are good you’ll find Meyer working unobtrusively behind the scenes to try to find a resolution.

The 71-year-old has parlayed his negotiating role in the South African transition to democracy into an international career in conflict mediation. Meyer describes his organisation, the In Transformation Initiative, as being “quite involved in a number of countries in giving advice in resolving challenges”.

The challenges in question involve some of the world’s stickiest geopolitical issues. Take Myanmar, for instance.

“I am involved there,” says Meyer, and chuckles ruefully. “That’s one of my headaches.”

He is working in an “advisory capacity” with the government of Myanmar leader Aung San Suu Kyi, who has faced growing international condemnation for maintaining a repressive regime and failing to act amidst a brutal military crackdown on Rohingya Muslims.

Meyer has said very little in public about his work in Myanmar. A The Guardian report in November 2018 described Meyer as being one of the “few figures” who still had the ear of Suu Kyi.

“I do have access to her,” Meyer acknowledges to Daily Maverick. “Whether she is always listening to me is a different question – and she doesn’t have to.”

He says the situation on the ground in Myanmar is “much more complicated” than is generally portrayed in the media.

“It’s not just the Rohingya problem. There are at least 15 armed ethnic groups in the country that all have to be attended to in terms of finding solutions.”

Of all Meyer’s current projects, however, the one he describes himself as most excited about is playing out on home soil. On Tuesday, 29 January, President Cyril Ramaphosa attended a Business Economic Indaba organised by Business Unity South Africa, at which the Public Private Growth Initiative (PPGI) laid out for Ramaphosa its plans regarding the ways in which South Africa’s private and public sectors could work together to combat unemployment and galvanise the economy.

The PPGI is the brainchild of Meyer and his friend Johan van Zyl, the CEO of Toyota Europe and Africa.

The way Meyer tells it, it was Ramaphosa’s inaugural State of the Nation Address that sparked the concept for the PPGI. In particular, it was the president’s rallying call to the South African public, Thuma Mina – send me – that did the inspirational trick.

“We came up with this idea of giving a response from the private sector to what the president had said [in his SONA address],” Meyer says.

“The emphasis was to follow a sectoral approach; to get the participation of the different sectors of the economy and say: ‘This is what the private sector can do to make the economy grow and create jobs.’”

A chance encounter on an aeroplane between Meyer and Minister in the Presidency Nkosazana Dlamini-Zuma helped to secure government buy-in. The two go way back, having served together in president Nelson Mandela’s first democratic Cabinet. Meyer says Dlamini-Zuma was “immediately interested” in the project, and invited Meyer and his colleagues to the Union Buildings to discuss it further.

What is now known as the PPGI has resulted in CEOs and representatives from 22 sectors of the South African economy pledge to partner with the government to create jobs, move the needle on economic growth and contribute to skills training.

By Tuesday, the PPGI had identified 18 specific projects across different economic sectors to this end. They were presented to President Ramaphosa, the ministers from his Cabinet’s economic cluster and the relevant department director-generals.

“There had been a request that we should enable the president to say something in [the forthcoming] SONA about 10 projects, and we gave him 18,” says Meyer.

“Each of these is actually quite exciting. There’s one from the small business sector saying: ‘Let’s create partnerships at the local levels of government’, whereby municipalities can create opportunities for small businesses. That’s something exciting that I don’t think has been put on the table before.”

It is clear that Ramaphosa’s administration views collaboration with the private sector as an essential ingredient – perhaps the key ingredient – to put jumper cables on the South African economy. Indeed, the PPGI is not the only initiative of its kind currently: 2018’s Presidential Jobs Summit was built around a similar model of public-private collaboration.

South Africans could be forgiven for seeing the PPGI as just another talk-shop, promising the world but unlikely to deliver the goods in practice.

“This is not just pie in the sky,” Meyer objects.

“From what I’ve observed in working with the different sectors was an absolute enthusiasm from CEOs and companies. They want to do something for the country. There are more than 20 sectors that have committed themselves in this way and have done so voluntarily.”

He acknowledges that a critical factor will be the government’s willingness to address the “inhibitors” that the private sector cited on Tuesday as impeding its ability to contribute to economic growth: from policy uncertainty to the unstable energy situation.

“There are damaging factors which we have to first counter and get out of the way,” Meyer says, “the factors which resulted in the decline of the economy over the past ten years.”

Though he describes himself as eternally cautious, Meyer is nonetheless convinced that there is a new spirit in the South African air that makes this the right moment for significant economic growth to take root.

“I would not even have tried [a project like the PPGI] under the previous administration,” he admits. DM