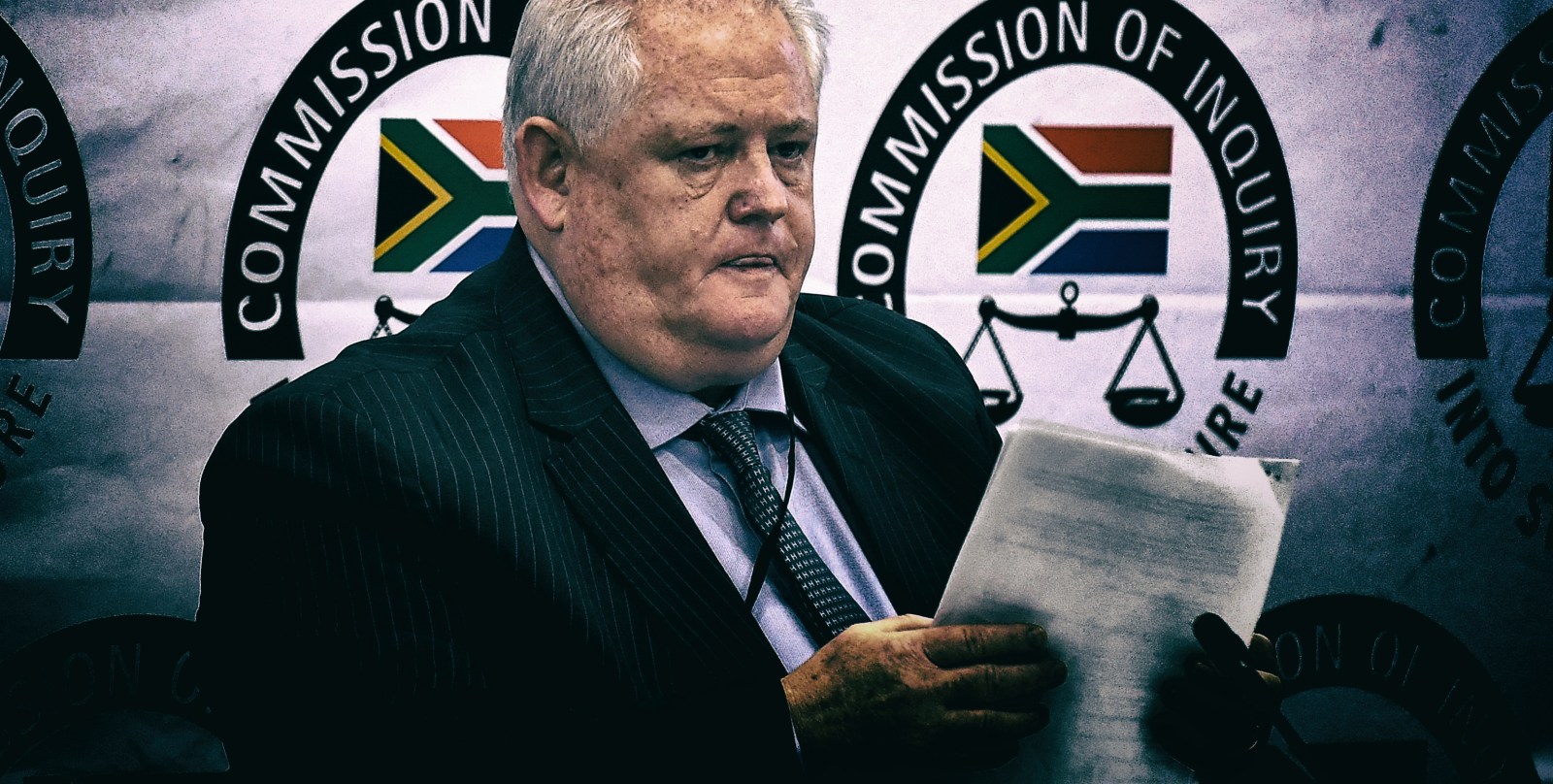 Three former Correctional Services Commissioners and a Chief Financial Officer are among a gang of diligent Bosasa lieutenants alleged to have taken cash and favours to bend the rules for the facilities management company. Linda Mti, Zach Modise, Khulekani Sithole and Patrick Gillingham, the Zondo Commission heard, were intermittently on the take over more than 10 years.

It was day five in the witness box for Angelo Agrizzi, the former Bosasa chief operating officer who is testifying before the State Capture inquiry.

His evidence was no less disturbing than it was on day one when he painted a picture of how the facilities management company manipulated the system by paying off politicians and senior civil servants at a cost of up to R6-million a month.

On Tuesday he revealed how not one, but three, former Correctional Services Commissioners had allegedly actively aided Bosasa’s corrupt practices through a widespread bribery system that landed the company nearly R3-billion in government business – the bulk of that from deals at Correctional Services.

Those include a catering contract, one for access control, another for CCTV systems and TV sets for inmates as well as fencing at between 47 and 60-odd facilities around the country.

Agrizzi testified how Linda Mti, Zach Modise, Khulekani Sithole and former Correctional Services Chief Financial Officer Patrick Gillingham allegedly benefited unduly from either cash or cars, travel and accommodation, sponsorships for their children’s studies or in one case, a matric dance, the arrangement of concession for a relative’s stay at a retirement village as well as security and maintenance and repairs at their homes.

Mti, the Correctional Services boss until around 2006, was a central focus as his relationship with Bosasa continued well after he resigned – ostensibly because he was due certain benefits for the duration of some of the contracts awarded during his tenure.

He allegedly received a mansion in the upmarket gated estate, Savannah Hills, in Midrand. This home, which Agrizzi testified could today be worth in excess of R10-million, was built for Mti by Bosasa through one of its subcontractors “that had gotten a lot of work” out of the company.

The deal was designed to escape scrutiny so the property was built to Mti’s “liking” and, once done, someone had Correctional Services put out a tender for a rental home for the then commissioner.

The plan was for that rental to accumulate over the years, a nifty little exit-gift for when Mti would vacate the post, Agrizzi testified.

But the bad press and negative publicity over Bosasa’s close ties to Correctional Services top brass, including Mti, complicated things and, soon, he was out of a job.

Agrizzi testified that in view of the heat, the Savanah Hills property was ultimately not transferred to Mti. But, to make up for that, Bosasa simply upped his monthly allowance by an extra R65,000 to cover the rental for the house and, later, for a downgrade to a neighbouring Midrand estate.

He said he believed that payments to Mti started as far back as 2006 and told the Commission that he was still packing cash bags destined for Mti as recently as 2016.

He would often accompany Bosasa CEO, Gavin Watson to Mti’s homes to make the delivery, Agrizzi told the Commission.

Asked how many times he made such trips, Agrizzi said “it must have been 30 to 40 times” over the years.

He further testified to alleged payments to Modise and Sithole as well as a KwaZulu-Natal regional commissioner who once became so angry about a R57,500 payment (it was not as much as he had expected) that he stormed off in a huff – only to return a short while later to collect his stash.

Bosasa allegedly spent big on Gillingham: a house in Midstream Estate, a new Mercedes Benz and a VW Polo for his daughter.

Payments for those would be done through electronic transfers by Bosasa staff who would be reimbursed in “cash” by one of the company’s divisions.

When Gillingham was suspended in September 2008, Bosasa picked up his legal bills, Agrizzi testified.

To make this all appear above board, former Commissioner Mti allegedly signed a backdated declaration of interest at a Protea hotel in Midrand.

Agrizzi, who met with both men to resolve their problem, testified that Mti scribbled a little on the document along the lines of “please ensure this does not interfere with your or present a conflict of interest”.

By then, both Mti and Gillingham were allegedly deep in the Bosasa pockets.

The company has been under investigation for more than a decade but has thus far escaped prosecution.

The State Capture inquiry has begun presenting some of the findings of an SIU report that shows clear deviations from National Treasury supply chain management process.

This report also details how Gillingham, outside of his normal duties, played an integral role in some of the deals, at times having been irregularly involved in the development of the tender specifications. Agrizzi testified about an extensive plot by Bosasa and its then partners to cook a lucrative tender for the provision of high-security fencing.

He said Gillingham, during a casual chat one day, asked him about a vandal-resistant system that could be used as a central TV management system in the country’s prisons.

“Each cell would have a TV but the head of a prison could determine content, volume and one allowing for a single national communication system to prisons around the country.”

In the long run, Gillingham wanted something that could incorporate network infrastructure that will have allowed for the addition of other future value adds like cellphone detection or thermal imaging, Agrizzi said.

By then, he said, they were often in discussion with Mti or Gillingham who had told them that Correctional Services needed a plan to use its surplus budget.

Agrizzi pulled information together with the help of an outside company and this document allegedly came to inform the tender specifications for the deal that one of Bosasa’s subsidiaries clinched a mere five months after it went out to tender.

On another deal, Bosasa had an approximate 47-day head start on any competitor for a high-security fencing system at all prisons. It was virtually impossible for anyone to have submitted a decent bid within that short period of time.

Agrizzi testified that the plan was for Bosasa’s name not to appear anywhere; the pitch would go in under the name of another company that Bosasa was buying through two trusts. The transfer of shares though was only signed once the deal was in the bag.

However, Bosasa had to make the tender process look legitimate so they arranged for several other companies to submit bids with the undertaking that they would each get a slice of the pie as subcontractors. He named some of them as Siyaya Fencing and SA Fence and Gate.

Agrizzi then testified how one night, while working late, he ventured across the Bosasa premises in Krugersdorp, west of Johannesburg, and found representatives of each of those companies sitting in a boardroom, thrashing out bids – together.

Agrizzi asked if they had switched off the Bosasa cameras because here they were sitting, ostensibly as individual bidders, in one room, swapping notes.

Bosasa was dispensing huge bribes but this did not shield them from ongoing investigations and the damaging effect of the media’s investigative reports.

Whenever they got wind of a raid, Agrizzi said they would trawl the system and offices for incriminating documents linked to Bosasa’s Correctional Services contracts or proof of payments or favours for those on their payroll.

In one instance he personally accompanied a colleague to a travel agency to destroy computers and all records relating to VIP bookings via Bosasa.

This followed on a 2009 article by journalist Adriaan Basson.

He said the company, Blake Travel, understood why the designated computers had to be removed.

After picking them up, Agrizzi and his senior colleague drove to a hostel that Bosasa was busy developing, dumped the lot into a big hole and then asked for petrol to set it alight.

Bosasa then recreated a fraudulent paper trail to ensure their VIP beneficiaries were safe.

In another instance, he said, CEO, Gavin Watson, received information about the process of the SIU investigation into the company. Watson, he said, allegedly instructed an IT guy in the company to trigger a server crash and to destroy incriminating material.

“At this point, the SIU team were planning to search Bosasa’s offices,” he said.

Agrizzi and other seniors scoured the office for documents relating to their fencing contract and while doing that, he claims, he found a document detailing an arrangement between Mti and Watson.

He had previously testified, several times, that Watson never signed anything – but was adamant that he found a copy of this alleged document.

Watson, he said, was extremely relieved once he handed him a copy and put it in a Ziploc bag, and poured water over it as if he was working with papier-mâché.

He testified that although they destroyed a lot of information, he had asked the guys to put some of it on two or three hard drives which he has since given to the State Capture Commission.