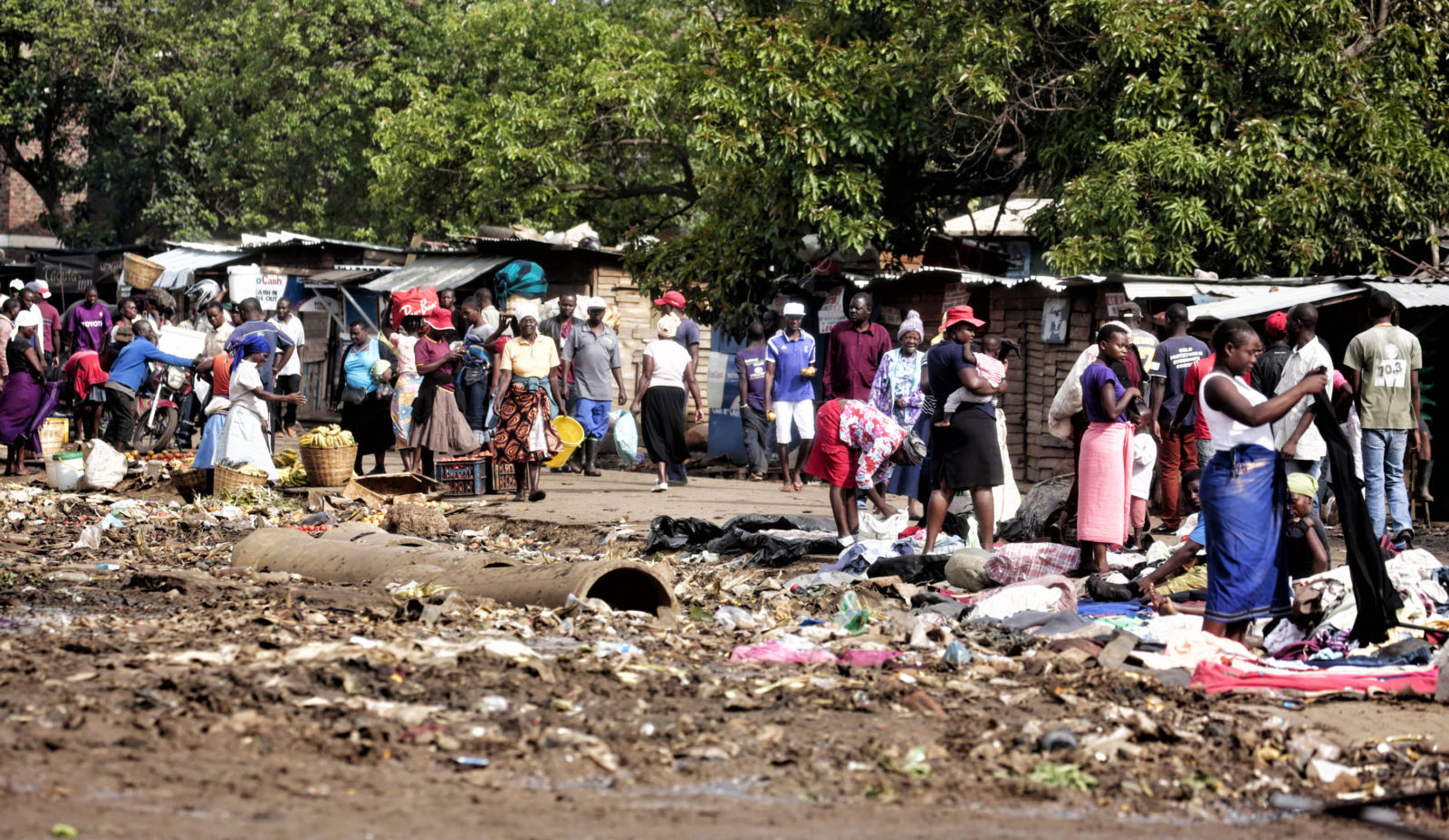 Vendors sell fruits among garbage lying on the ground at a people's market in the high density suburb of Mbare, Harare, Zimbabwe, 16 January 2019. Most members of the public stayed at home, two days after the country's mass protests started on 14 January. EPA-EFE/AARON UFUMELI

South Africa is planning to extend short-term credit to Zimbabwe and also to help it write off its US$7.4-billion external debt, to prevent its neighbour spiralling out of control. Critics say this will be a waste of money unless it can pressure Zanu-PF to make political reforms.

Finance Minister Tito Mboweni disclosed the plan in an interview with Daily Maverick as Zimbabwe slipped closer to the brink after a massive fuel price hike on January 12 sparked a general strike and then widespread street protests, many of which were violently suppressed by state security forces.

However, some critics believe that South Africa is just tinkering with the Zimbabwean crisis and that any money that it channels to Zimbabwe will be wasted unless it persuades the ruling Zanu-PF to make fundamental political and economic reforms.

“It’s an act of self-delusion if you think you can avoid talking politics as you engage Zimbabwe, as in many other places,” Piers Pigou, senior consultant to the International Crisis Group said in response to Mboweni’s disclosure.

Harare is clearly desperate for a bailout from South Africa and/or any of its other allies to resolve an economic crisis which is slipping out of control.

Director-general of the SA National Treasury Dondo Mogajane told Sunday Times that South Africa had declined a request for a bailout of $1.2 billion which the Zimbabwe government had made to the South African government on December 26.

Mboweni did not mention specific numbers but told Daily Maverick the two governments were still discussing how to work together to settle Zimbabwe’s debt to the IMF, World Bank and the Paris Club.

According to Zimbabwean finance minister Mthuli Ncube, quoted by Bloomberg in October, Zimbabwe has a total national debt of $16.9-billion, of which its external debt is $7.4-billion, with $5.6-billion in arrears.

Mboweni said South Africa and Zimbabwe were also discussing the possibility of South Africa extending an existing credit facility of just short of R100-million which Zimbabwe had with the SA Reserve Bank. Mboweni said Zimbabwe had provided collateral for this loan in the form of its holding of SA Land Bank bills. The extension of this facility depended on Zimbabwe being able to provide further collateral.

Mboweni insisted that Zimbabwe had always repaid its loans under this facility in the past.

He said SA was also discussing ways of helping Zimbabwe lift its debt to international creditors. Without mentioning a specific figure, Mboweni said this debt “is not a lot of money” and that he was sure Zimbabwe was looking not only to South Africa but to “other friends and institutions” to help it write off the debt. Zimbabwean President Emmerson Mnangagwa has been in Russia, Belarus, Kazakhstan and Azerbaijan, supposedly seeking financial help from these old allies to rescue the crashing economy.

On Sunday International Relations and Co-operation Minister Lindiwe Sisulu said the “protests in Zimbabwe have calmed down and life in the streets of Zimbabwe is returning to normal” — an assessment which Zimbabwean opposition figures have denied.

She also said “the South African government was working with the Zimbabwean government in finding a short- and long-term solution to the economic situation” adding that “if the situation is not attended to, the current economic challenges can derail the political and economic progress the country has made since the election of the new president”.

Meanwhile Lindiwe Zulu, chairperson of the ANC’s international relations sub-committee, told journalists before an ANC meeting on Sunday that the official discussions between SA and Zimbabwe “must speed up, they must help Zimbabwe to recover”.

Mboweni confirmed the discussions were advanced. He said President Cyril Ramaphosa and Mnangagwa were holding frequent phone conversations about how the two countries could work together to find a solution to what was happening in Zimbabwe.

The two presidents had delegated some of that responsibility to Mboweni and his Zimbabwean counterpart Mthuli Ncube. They had met once in December and would meet again soon to discuss possible solutions being drafted by their officials.

Politically there were two key issues to be resolved by Zimbabwe, Mboweni said. The first was for the political leadership to work hard for the lifting of the remaining international sanctions against Zimbabwe. More technically, Zimbabwe was very keen to re-introduce its own currency, “and that’s very important for reviving the economy”.

For some time there has been talk of Zimbabwe adopting the rand as its currency because of the failure of alternatives. First, the government terminated the Zimbabwe dollar in 2009 after it devalued by trillions of percent, along with record hyperinflation. Zimbabwe then adopted a basket of foreign currencies, mainly the US dollar, but this has also not resolved its financial and economic problems. In 2016 a shortage of US dollars forced it to introduce “bond notes” which were supposed to be backed by the US dollar at par, but have since also devalued precipitously.

However, the idea of Zimbabwe adopting the rand is clearly not on the table in the current discussions between the finance ministers and officials. Mboweni tweeted a news report that Ncube had said that Zimbabwe would not adopt the rand as it did not have adequate resources to do so.

Ncube told a meeting in Zimbabwe that if Zimbabwe wished to adopt the rand, it would need US dollars to acquire the rand so that did not make sense. And Mboweni told Daily Maverick on Sunday that a new currency would help Zimbabwe sort out its national payments and other economic problems.

If Zimbabwe managed to resolve these economic problems, mainly establishing a new currency and wiping out its external debt, it was possible that “in two or three years the economy would be up and running.”

Though South Africa and Zimbabwe’s other regional allies have often called on Western countries to lift the few remaining sanctions against Zimbabwe, these countries are reluctant to do so mainly because of political considerations.

When Zimbabwean soldiers used live ammunition on Zimbabwean opposition supporters protesting against the results of the July elections, Western sources said Mnangagwa had already blown his chances of sanctions being lifted.

The violent crackdown on protesters, which is believed to have cost at least 12 lives, seems likely to harden Western resolve even further against lifting sanctions or otherwise helping Zimbabwe.

Pigou deplored Pretoria’s intention to bail out Zimbabwe financially, without any political preconditions.

“South Africans are mad to get engaged in this,” he said, adding that he believed Zimbabwe was already deeply in debt to South Africa. “Over the past two decades, South Africa has put money in there or supported them in other ways, and I wonder if that calculation has been made.”

He was also critical of Sisulu and Zulu for making no reference to the violent crackdown on protesters in their statements.

In a report for the International Crisis Group published this weekend, Pigou said the biggest challenge for outside forces was to get the government to do something about the unrest “besides shooting and arrest protesters”.

“Zimbabwe desperately needs reform if the government is to keep the country reasonably stable and preserve its re-engagement with international donors, a process that started with Mugabe’s ouster.

“To pull off that reform, it needs broad political consensus, including within both the ruling party and the opposition, but also within other social constituencies. The country is polarised on multiple fronts — ideally, the government would commit to supporting the development and implementation of some form of national reconciliation strategy to at least start to heal these divisions. For now, however, such a strategy is not even part of political discourse.”

But Pigou said it was unclear who had the leverage to nudge the government from repression to reform — “or if anyone wants to do so”.

“With the prospect of more bloodshed and large-scale refugee flight, the region, and indeed the world, cannot afford to ignore the crisis,” he said.

Though Pigou did not say this, it is clear that South Africa’s muted and apolitical response stems — as so often before — from its historical solidarity with Zanu-PF. As Zulu mentioned in her statement on Sunday, the ANC and Zanu-PF are both members of the association of Former Liberation Movements of Southern Africa. These members rarely criticise one another, especially in public.

Mboweni said he could not discuss the need for political reform in Zimbabwe as this was beyond his remit.

“The scale of violence is the worst the country has witnessed in some time,” adding that the military was again using live ammunition to suppress protests.

He said that according to Zimbabwe’s Doctors for Human Rights hundreds of protesters had been shot on the first day of protests on January 15, of whom some had died and 107 patients had been treated for gunshot and blunt trauma wounds.

For days after that, it had been hard to get updated casualty figures as the government had cut off the internet.

But on 18 January, the Zimbabwe Human Rights NGO Forum was able to publish consolidated statistics counting 844 human rights violations, including at least 12 killings, at least 78 gunshot injuries, at least 242 cases of assault, torture or inhumane and degrading treatment, including dog bites and 466 arbitrary arrests and detentions.

“Protesters have also engaged in intimidation, violence, vandalism and looting. The government confirmed that they stoned one police officer to death. There are several unconfirmed reports of fatalities and injuries among the security forces. The extent of the property damage has yet to be determined, though human rights groups have documented at least 46 instances. The country’s main cities are at a standstill.”

Pigou noted that the optimism that had accompanied the ouster of long-time President Robert Mugabe in November 2017 had now evaporated. For a time, many Zimbabweans thought Mnangagwa might be a reformer, though he had long been a ruling-party stalwart who was Mugabe’s vice president.

“The international community, including a number of critics, were prepared to give him the benefit of the doubt.” Now, however, cynicism was growing in many quarters, even among Zanu-PF loyalists and members of the security forces, who were also bearing the brunt of economic decay.

Since the elections, the new government had managed to deliver few tangible results, Pigou said.

“People in Harare complain that the administration is akin to a new driver in an old taxi. Many see the government simply as a reconfiguration of the Zanu-PF, now freed from Mugabe, but dominated by security-sector interests and factions aligned to the new president.”

Pigou believes Mnangagwa will crack down even more harshly if the protests continue, citing a report in Zimbabwe’s government-supporting Sunday Mail in which the president’s spokesperson George Charamba warned that the deadly crackdown on protesters was just a “foretaste of things to come”.

The general strike which had deteriorated into violent protests was ostensibly organised by the Zimbabwe Congress of Trade Unions, but Charamba insisted that the trade union body was “moribund”.

He said that the opposition Movement for Democratic Change (MDC) was the real power behind the strike and protests, in an attempt to gain the power it had failed to win in the 2018 elections. DM