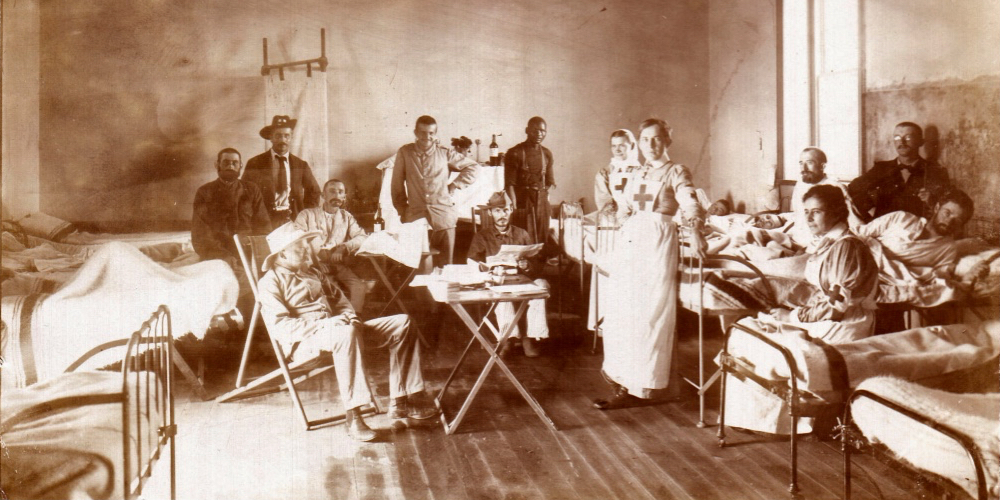 It is often forgotten that the Anglo-Boer War was one of the great liberal and left-wing causes of the late 19th century. The first leader of the Labour Party, Keir Hardie, saw the Afrikaners as stout peasant farmers, standing up to the might of British imperialism. Across the world, funds were raised for the Boer cause. Others went further, volunteering to make the hazardous journey to join the struggle against the British.

“The night is overthrown. The sun is rising. Forward, the Red Navy, forward, Soviet youth!”

The words are pure Soviet propaganda, but the tune they sang would be familiar to many South African. It was Sarie Marais.

The song was sung in desperate times — the siege of the port of Sevastopol in (30 October 1941 – 4 July 1942). The 110,000 Soviet troops were defending their fortress on the tip of the Crimea against German, Romanian and Italian forces twice their number before, finally, the city fell.

Nor was this the only time Soviet or Russian soldiers sang about South Africa. During World War I a folk song was popular with Russian troops. The words of its first verse went like this:

Transvaal, Transvaal, my country,
You are all in flames!
Beneath the shade of a spreading tree,
A Boer is deep in thought.

So popular was the song that it continued to be sung in World War II. A nurse was heard singing it to a wounded soldier during the legendary siege of Leningrad,1 when its inhabitants held out against the Nazis for 872 days.

The Russian connection with the Boer War

It is often forgotten that the Anglo-Boer War was one of the great liberal and left-wing causes of the late 19th century. The first leader of the Labour Party, Keir Hardie, saw the Afrikaners as stout peasant farmers, standing up to the might of British imperialism. Across the world, funds were raised for the Boer cause. Others went further, volunteering to make the hazardous journey to join the struggle against the British.

Some came from the United States, but the majority were from Europe. Around 2,500 came to join the Boer ranks — the largest contingent from the Netherlands. They were joined by hundreds of French, Italians and Irishmen. Among these fighters were 225 Russians.2 They fought in some of the bloodiest battles of the war including Spioenkop and Tugela Heights.

Lieutenant Yevgeny Augustus recorded in his diary the wonder in which the Russians were held by the Afrikaners they fought alongside. “Do you people have cows in Russia,” he was asked. “Yes, we do. And what about sheep? We have them as well. And what about railways? Yes, we have railways too!”3

The most famous Russian soldier was Colonel Yevgeny Maximov, who came to lead the 300-strong “Foreign Legion.”4 An adviser to Boer generals and presidents, he is famously shown being shot at point-blank range by Captain Towse in a painting in the Africana Library in Johannesburg. Captain Towse was awarded the Victoria Cross, but Maximov survived.

After the war, Transvaal President Paul Kruger wrote to Maximov.

“Motivated by the absolutely selfless impulse of your soul, you have fulfilled your duty as an able and fearless representative of the Volunteer Commando under your leadership.”5

The importance of the Russian troops was eclipsed by the work of the medical staff. The Russian Red Cross sent everything from ambulance units, complete with doctors, nurses and administrators to teams who served in hospitals.6 Huge sums of money were raised to finance the operation, with an appeal in St Petersburg alone bringing in 100,000 roubles. The medical staff won the heartfelt thanks of Kruger, who organised for them to come and meet him.

“He thanked us all, in the warmest possible manner for the timely help,” one of the nurses later recalled.7

At Kroonstad an ambulance unit established a hospital with 106 beds. Captured by the British, the hospital continued operating. The needs were enormous. The British had 60,000 men, and only three doctors to serve them. Soon the Russians were treating the British sick and wounded as well.

A wave of public support swept across Russia. There were popular postcards, pamphlets and books.

“Church services are held for President Kruger’s health. Orchestras in public places are asked to play ‘the Boer anthem’ and when they do they have to repeat it indefinitely,” reported a St Petersburg magazine in 1900.8 Streets were renamed, “Transvaalskaia, and Krugerovskaia.”

In the circumstances, is it any wonder that when the medical staff and soldiers came home, singing the songs they had learnt at the front, they fed into the popular imagination?

And so it was that when the Soviet Marines fought against the German 11th Army in Sevastopol, they turned to the music they had heard in their childhoods. Sarie Marais — rewritten as Forward the Red Marines! — rang out across the battlefield. DM