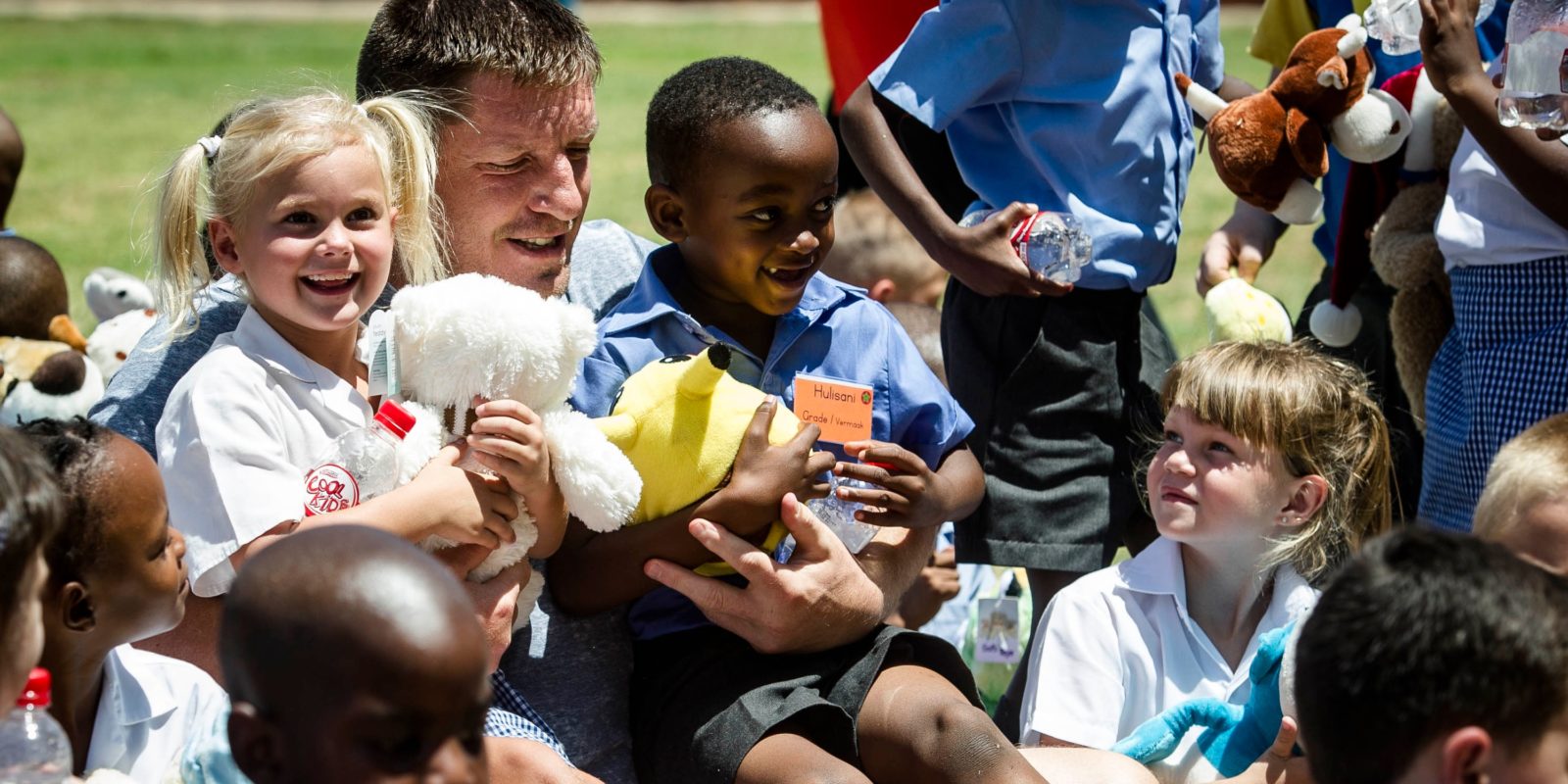 Bakkies Botha helps Grade 1 pupils with their school bags at Laerskool Simon Bekker on January 13, 2016. Botha is an ambassador for Helping Hands, a charity that provides students with a schoolbag and contents which practice hand-eye coordination and stimulate the development of motor and perceptual skills. Lize-Mari Smit (7) and Hulisani Ngwana (7) pose for a picture. (Photo by Gallo Images / Beeld / Nelius Rademan)

Since the start of the year, with the release of the 2018 matric results through to the opening of private schools on Wednesday, there have been several stories about schools and education. This is an annual occurrence but the developments seen this year are a powerful reflection of certain dynamics and trends within our society. Sometimes, events in one particular sector demonstrate how a whole society operates, what the levers of power are, and who controls them. The start of the 2019 school year is a reflection of the dynamics driving political behaviour in South Africa.

Schools mirror society in many interesting, joyful, and often quite disturbing ways. Everyone who is able will have a photograph of their child on their first day; it does not matter which race or class you come from, this is an important moment. Education is crucial to all societies as it is the one place that has the potential to bring children from families of different classes and beliefs into one classroom. Huge divisions in our society, huge distances of our physical geography, and our racialised inequality mean it is vital that we create some kind of unified nation.

While it is easy to be wary of any kind of social engineering, and our past serves as a good example of what can happen when education is misused, the type of schooling system that exists matters to the decisions society makes. Classrooms and teachers set the rules for public debate, they ensure children know disputes cannot be settled using violence, and certain rules of behaviour are entrenched and enforced. In short, children are socialised.

On many levels, our education system is actually a wonder. It takes children from a variety of different backgrounds, and attempts to prepare them to all write the same set of exams at the end of just 12 years. Considering where we came from, and how varied the lived experiences of our children are, this speaks to the hopes of South Africa. We are not yet what we want to be, but the hope of what we could be is there. This could explain why, so often, there is a massive reaction when that hope is dashed, and why communities react so strongly when those hopes are dashed. It also gives huge power to the stories of those who are able to do well in the system despite coming from incredibly poor backgrounds with very few educational resources.

One of the biggest stories over the past week has been the situation at the Schweizer Reneke Laerskool, involving an image of a group of black children sitting at a desk in a corner while white children sit together in the centre of the classroom. While we all feel something different when we see the image, part of its power comes from the lived experience of black people who were not fully accepted when they went to formerly white schools. It could well evoke powerful and disturbing memories of how people were ignored, or left alone, or teased or even attacked when they went to school.

For many others, the image is a powerful reminder of what apartheid was – white people placed front and centre to receive everything, while black people were deliberately prevented from attaining their potential. While the final results of investigations into what happened at that school are yet to be released, the power of the image may not be mitigated by any of those findings. It may be that it is the image that counts because of how strongly it evokes those memories, and the symbolism of the past that it contains.

A claim that is often made about our education system, and particularly the public education system, is that as a society we don’t get value for money. Education is one of the government’s biggest budgetary priorities. It takes up a large percentage of government spending, and yet the results do not appear to show that it is improving. But this basic measure fails to acknowledge everything else that the state education system does. The government pays for children to be transported long distances to school. And, more importantly, it also pays for children, who otherwise may not have food to eat, have a proper meal at school. This shows the incredible poverty of large parts of the country, and the extent of what needs to be done to resolve that.

But it also demonstrates the incredible inequality in our country, even within the government system. There are schools in the Western Cape and Gauteng that rival the best in the world, where learners can get a relatively cheap education with government teachers and resources. Apartheid’s spatial geography means that the communities around those schools are able to give them more resources, including teachers themselves. Meanwhile, in townships, and rural areas, there are still hundreds of thousands of children who have to use pit latrines to relieve themselves.

In some ways, the fact that young children still have to risk an awful death by using pit latrines demonstrates two other realities in our society – how risky poverty is (how, the poorer your parents are, the lower your life expectancy), and the limits of government’s capacity.

The Basic Education Ministry has actually gone to court to stop being forced to meeting certain basic minimum norms and standards at schools. In other words, they’ve asked a judge to not be forced to provide proper toilets in schools. While it is easy to lambaste the Minister and officials for this, it is obvious they would not do this if they had a choice. But it seems that they don’t. Getting proper facilities to rural schools in the Eastern Cape and Limpopo really is that difficult.

Then there is the politics of education. It is not just the fact that communities take education seriously, and political parties like to mobilise people around schools where certain events happen. It is also around the actual governance of education.

Unions, and one in particular, appear to have too much power in education. The SA Democratic Teachers Union has been accused of having members who sell posts, and of placing the rights of its members far above the rights of the children they are supposed to be teaching. In some ways, this is similar to what happens in other democracies. Teachers’ unions in the US, for example, are accused of holding back education reform. But here, because of Sadtu’s relationship with the ANC through Cosatu and the alliance, it appears to have more power. It has been able to prevent the use of external inspectors in schools and appeared once to be able to force the removal of an education director-general.

So despite promises from the ANC during its election manifesto reform the civil service, the expectations that teachers’ behaviour will actually change are fairly low.

Perhaps the most worrying aspect of our education system, the aspect that demonstrates the sheer depth of our problems, lies in the number of children who don’t complete their schooling. Every year the nation appears to ask what happens to the hundreds of thousands of young people who started Grade 1 12 years before but do not write the matric exam. It appears the ministry does not actually keep figures on where they go or what happens to them.

Unfortunately, barring a few who are able to succeed without a formal qualification, it is likely that almost all of these people will join the ranks of the unemployed. They become part of that figure that shows how many millions of South Africans, generally young South Africans, are without work. They have been failed by their schools, their teachers, their government and their society. These are the people who are the most likely to be tempted to give up hope. DM