Mantashe in Xolobeni: A master-class in coercive dissembling 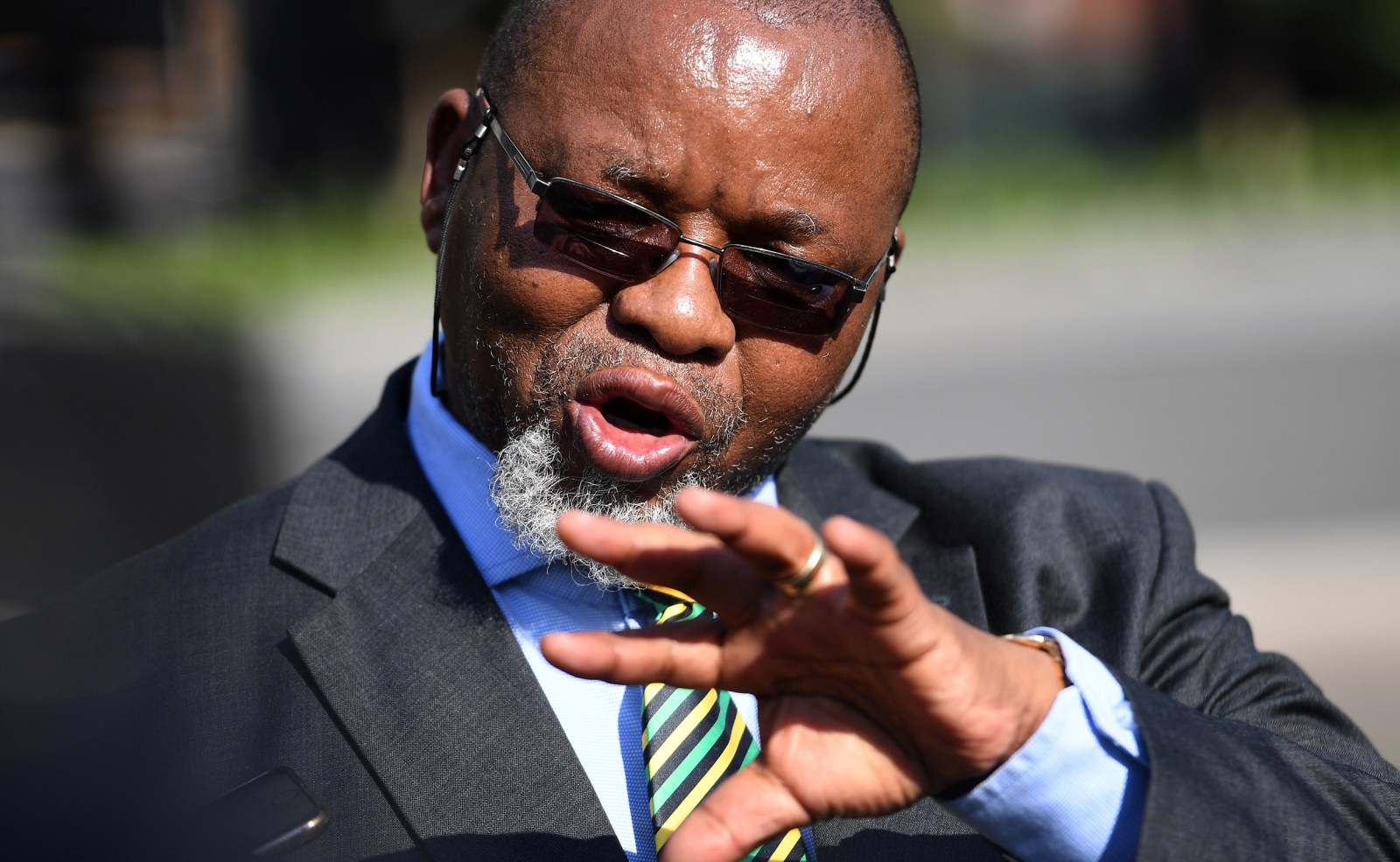 ANC chairperson Gwede Mantashe ahead of his testimony at Raymond Zondo’s commission of inquiry into state capture on November 27, 2018 in Johannesburg, South Africa. (Photo by Gallo Images / Netwerk24 / Felix Dlangamandla)

It was always going to be a day when the truth got taught a lesson. For weeks, local and international human rights groups had been prevailing on mineral resources minister Gwede Mantashe not to return to Xolobeni, where residents had won a landmark court battle to keep mining off their land. He went anyway and chaos erupted. But did he win?

“The question is why Gwede left us here and went to the dunes,” said Nonhle Mbuthuma, chairperson of the Amadiba Crisis Committee (ACC), at 10am on the rain-soaked Wednesday morning, 16 January 2019. “He didn’t even ask permission from the elders.”

There were other questions for South Africa’s mineral resources minister, and most of them—like the one Mbuthuma just put to Daily Maverick—had to do with this delicate matter of respect.

For instance, the question that upended the ANC’s stance on land reform in South Africa: why was Mantashe back in Xolobeni in the first place? The judgment handed down by the North Gauteng High Court on 22 November 2018 had given the impression that the Interim Protection of Informal Land Rights Act finally counted for something in the country, meaning that if the government wanted to grant mining rights on land owned by a traditional community, they now had to get that community’s consent. As evidenced by the 250 members of the ACC anti-mining lobby who were toyi-toying in the marquee set up by the Department of Mineral Resources (DMR), such consent had not been forthcoming.

“Read the court judgment, Mr Mantashe,” noted a release put out by the ACC on 15 January, reminding the minister that 68 of 74 homesteads in the area had joined the litigation against DMR. The reason for their resistance, the ACC added, had been eloquently summarised by Judge Annali Basson herself—not only would it “bring about a physical displacement from their homes” but it would “lead to an economic displacement” and engender “a complete destruction of their cultural way of life.”

But Mantashe, whose convoy of Audis were making their way to the titanium-rich dunes just as proceedings in the tent were due to start, wasn’t budging. On the back of local and international pressure for him to call off the visit, DMR had been issuing press releases of its own.

“During his last meeting with the Amadiba Crisis Committee in November 2018,” stated one from 14 January, “the ACC requested the Minister to come back and meet with the broader community in Xolobeni.”

The ACC had done no such thing, apparently—Mantashe, they insisted, had invited himself. And along with him arrived a faction of pro-mining lobbyists from outside the area, a group of youths whose transport had been organised by the Mbizana municipality, which fact had been confirmed for Daily Maverick by a ward councillor from the district. Given that the ACC had accused Mantashe of bussing in 400 to 500 supporters on 23 September 2018—when police had used stun grenades, teargas and death threats to disperse the anti-mining protesters—all of this had been anticipated by the crisis committee’s leadership. Up until the afternoon of 15 January, they were intent on boycotting what they were calling Mantashe’s “third coming”. But there had been a last-minute tactical turnaround: this time, instead of protesting, they would build on the court victory and take part.

The thing was the ACC t-shirts. Nobody, the order went out, was to wear one.

And nobody did, except for the guy that got picked first at question time, five minutes before the meeting erupted in chaos.

In a time of universal deceit, so the saying goes, telling the truth is a revolutionary act. Mantashe’s truth, in the speech he gave when he eventually made it onto the podium, was straightforward. First, the ACC had no authority to ban him “from anywhere”. Second, mining was quite capable of “co-existing with agriculture and tourism”. Third, thanks to the black empowerment laws, the community would get 25 percent of the mining deal “for mahala”. And then he sat down, to boos from the anti-mining lobby, which drowned out the cheers from the pro-mining lobby, who (presumably due to the rain) hadn’t been able to get to the venue in the numbers that had been seen in September.

“I’m a member of the ACC,” said the guy in the crisis committee t-shirt, “and we have agreed that we want mining, but a white person came and told us to disagree.”

The whistling and shouting from the real members of the ACC were all to the effect that this person was fake.

“We have never seen him before, he’s not from here,” Mbuthuma would later tell Daily Maverick. “We asked Mantashe to continue the meeting so that we could put our questions to him, but he closed the proceedings and left.”

To be fair, it’s possible that Mantashe feared for his safety. When he walked off the stage, the ACC members were standing on their chairs and raising their fists. Two minutes later, they were standing on their chairs and raising other chairs. Two minutes after that, they were throwing chairs—and the police were roughing up a white man by the name of Jan Abbott.

But if Mantashe was scared, he wasn’t showing it to the cameras. “I will come back again,” he told the eNews crew, “I must work here. People tried to disrupt the last meeting, they will disrupt this one.”

Then, in response to the allegation that there were outsiders in the tent, he said to the TV cameras this: “It is the crisis committee people that say so, not me. They say they are divided by outsiders that are white, not me.”

So let’s assume, for objectivity’s sake, that the man who’s in charge of mining in our country is a man favoured by the gods. Let’s assume it’s a coincidence that the only person who got to ask a question was the only person in ACC colours because for some reason he didn’t get the memo. Let’s assume this person wasn’t bluffing when he said that the ACC is, in fact, a pro-mining lobby, and that a Caucasian infiltrated the group to persuade them of the folly of their ways.

It would all explain why politicians are remarkable human beings and the rest of us are rubbish. Because, incredibly, by 1pm on the afternoon of 16 January, as Mantashe was speeding off in his convoy and the pro-mining people were getting their pre-packed lunch, another release came out of DMR.

“The Minister of Mineral Resources, Mr Gwede Mantashe, today announced the imminent commencement of an independent survey to be undertaken in Xolobeni,” it stated. “The survey is in line with one of the outcomes of the court judgment of the High Court in North Gauteng last year, which called for thorough consultation of the Xolobeni community prior to any granting of a mining right.”

Truly brilliant. Mantashe, it appeared, had actually got to win the court case by losing it—it didn’t matter that Judge Basson had referred to the 68 of 74 households that didn’t want mining because the court litigants didn’t count as a real survey. As local pro-mining leader Zamile “Madiba” Qunya had told Daily Maverick in late December, during the first round of reporting for a long-form feature on Xolobeni due to appear in a few weeks:

“I will not agree with the number unless it’s done by professionals.”

As for Mbuthuma, she was rallying her troops. While the DMR was pressing send on its master-class in dissembling, she was standing in the rain on the back of a truck, exhorting the ACC to keep the faith. She didn’t need to try too hard, they were all smiling. Somehow they were energised by the minister’s tactics—and this time, at least, nobody (not even Jan Abbott) had gotten seriously hurt. DM