The ANC’s ‘not election campaign’ hits the stump across KZN 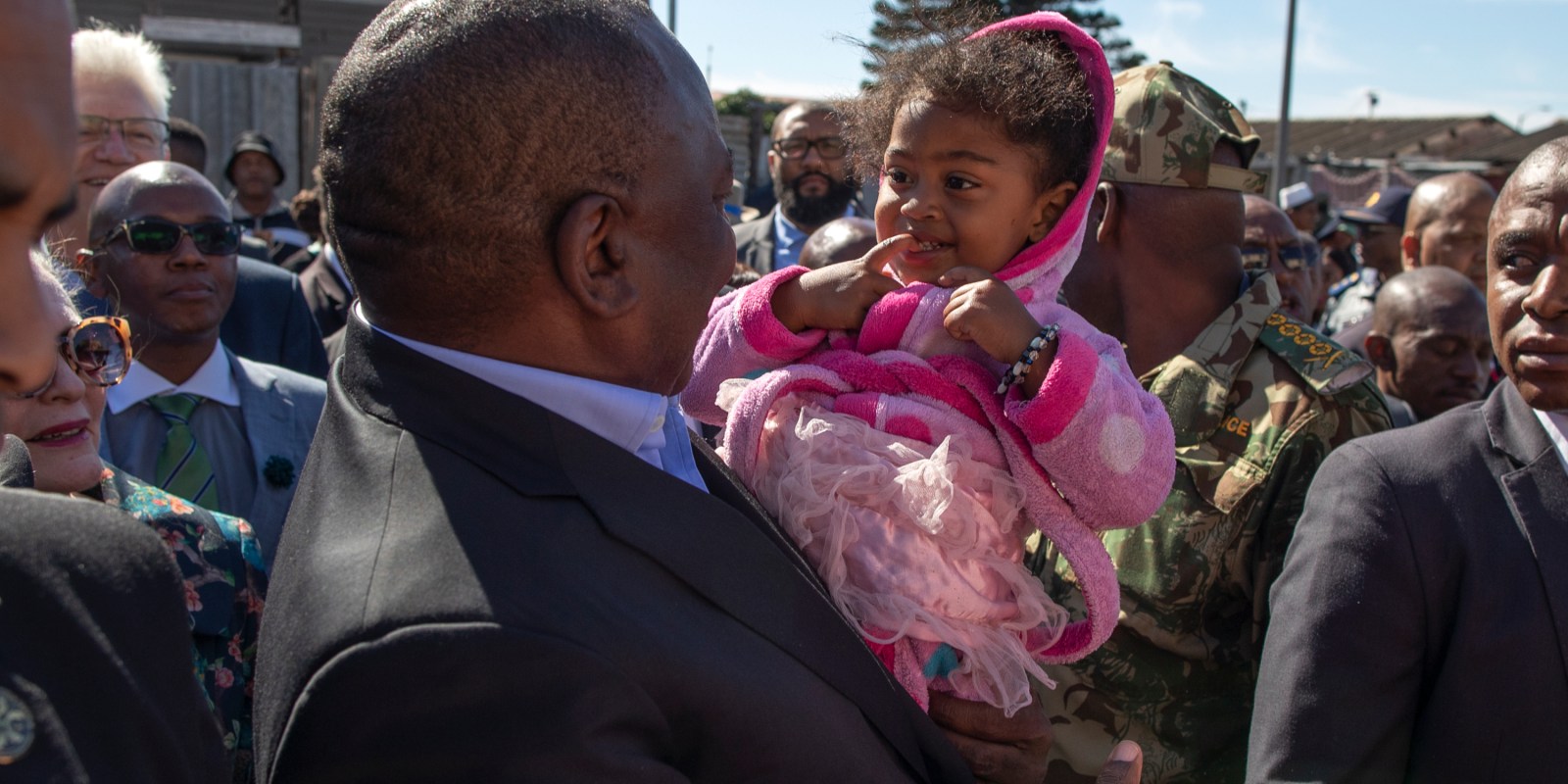 Ostensibly, the ANC outreach activities – dubbed blitzes in governing party lingo – across KwaZulu-Natal are about calling people to Saturday’s ANC election manifesto launch at Moses Mabhida Stadium. But as ANC top officials and National Executive Committee members traverse the province, it looks and sounds more and more like an early election campaign trail. And it seems that unity, that which the ANC proclaims it has now found among its own ranks, and working together may well be the over-arching theme of its manifesto for ANC supporters, but also as a tout for support from a broad range of citizens.

The campaign trail can be gruelling. A swathe of stops on any given day, be it meetings at stadiums, door-to-door visits to tell residents about the ANC manifesto launch, lunches, cake cutting ceremonies or pamphleteering at taxi ranks. Thursday took ANC President Cyril Ramaphosa to the second city hall in two cities over two days to meet interest groups. After an interaction with professionals on Wednesday evening in Durban, it was business and farmers on Thursday in Pietermaritzburg.

And there in the Msunduzi council chambers meeting with community groups after the business luncheon, it slipped out in an almost as a by-the-by line – Saturday’s ANC manifesto launch would be one calling not only on ANC supporters to work together but all South Africans. The broad headline would be, “Let’s work together to move the country forward”, said Ramaphosa, arguing for a social compact two days after he signalled that the manifesto would talk to a “massive national effort” for economic growth and development.

It’s a clear indication the ANC wants to appeal to those outside its ranks and support base for votes in a crucial 2019 election on the back of its sustained choreographed demonstration of internal unity or the least cohesiveness. The focus would be on doing things differently as the ANC goes for renewal and unity.

Ramaphosa trekked with former president Jacob Zuma to the graveside of ANC founding president John Langalibalele Dube in Inanda on Tuesday where both Ramaphosa and Zuma laid wreaths in a heavily choreographed event to signify renewal and unity.

The demonstrations of unity were also on show from ANC NEC member and Minister in the Presidency for Planning, Monitoring and Evaluation Nkosazana Dlamini Zuma, who lost to Ramaphosa by just 179 votes at the ANC December 2017 national conference.

“Siyaunited… If we are not united, we fall,” she told the audience at the ANC 107 birthday bash in Greytown in the Inkosi Bhambhata region, according to a clip posted on Facebook by ANC volunteers.

A day later, on Wednesday, ANC Deputy President David “DD” Mabuza, on the campaign trail in Howick in the KwaZulu-Natal Midlands, spoke to reporters about the party’s December 2017 Nasrec national conference where he was criticised for switching from Dlamini Zuma to Ramaphosa.

“If we did not go the way we went, probably we will be talking about the ANC that is limping today,” Mabuza is quoted as saying by News24.

And so it went everywhere with regards to proclaiming ANC unity.

That ANC election manifesto call to work together, of course, echoes one of the hallmarks of the Ramaphosa presidency, given expression in 2018 through a variety of high-level powwows that brought government, labour and business together from the jobs summit to investment conference and others.

Said acting ANC national spokesperson Zizi Kodwa on the sidelines of Thursday’s presidential programme: “The manifesto will unite the ANC and South Africa around the economy, jobs and crime…”

But electioneering and the manifesto razzmatazz is not always a smooth ride.

The DA said it was taking legal advice on an ANC 107 birthday bash poster that seems to have used a photo the DA has used in its “One South Africa For All” 2019 election campaign launched in September 2018. DA national spokesperson Solly Malatsi on Thursday dismissed the ANC’s denial that it was using the same photo for electioneering.

“The ANC is the antithesis of ‘One South Africa for All’ and it is pitiful that the governing party would stoop so low as to brazenly stealing another party’s election slogan. The commitment to building this country goes far deeper than simply stealing a slogan,” Malatsi said in a statement on Thursday.

IFP KwaZulu-Natal legislature leader Blessed Gwala also raised a red flag over the ANC-led Alfred Duma council spending R400,000 to print calendars and diaries as part of the Thuma Mina campaign. Ramaphosa must rein in “his own comrades, who are on a campaign trail of embezzling public funds under the guise of his Thuma Mina election campaign”, Gwala said in a statement on Thursday.

While Gwala claims malfeasance in this case, many of Ramaphosa’s Cabinet ministers have been treading a fine line of mixing ANC and government business. This will no doubt be watched with eagle eyes by opposition parties. Broadly speaking, this week it seemed the difference was all in the looks: government events like handing over goodies at schools get departmental banners and photos on social media by departmental communications staff and the ministers sport no green, gold and black, the ANC colours; governing party events are full of party regalia in dress and accoutrements from banners and pamphlets to T-shirts proclaiming, among other things, “I am a Tata Mandela – Mama Sisulu volunteer”, or “#Thuma Mina”.

Service delivery records traditionally feature when the governing ANC celebrates its birthday and 2019 has been no different. But it’s been unity that has been front and centre this week as the various ANC leaders took to the 11 regions in KwaZulu-Natal, the largest province for the governing party where voter turnout will have a decisive impact on ANC polling support. And Ramaphosa is on public record as saying the party wants not just a percentage, but an overwhelming victory.

The manifesto will be key in getting ANC supporters to the poll countrywide – their stayaway in the 2016 municipal poll on the back of years of a scandal-ridden Zuma administration cost the ANC an eight percentage point drop to 54% voting support; and trying to expand ANC appeal to other sectors, like the black middle class and among professionals.

Other hints about what the ANC calls the “People’s Manifesto” have emerged in this week of heavy ANC campaigning. Growing the economy is set to be central, alongside jobs and, potentially, land. Crime, rather than a more succinct reference to corruption, or State Capture, is anticipated as this may be regarded more palatable in the drive for unity and support.

It is on this point – like the final list of ANC public representatives candidates – that the compromises between maintaining unity among the factionalised interest groups and renewal, or the return to ANC founding values and integrity, may just come back to bite the governing party. Again.

But on Thursday the economy, jobs and better governance at the State-owned Entities (SOEs) came up again at Thursday’s business lunch in Pietermaritzburg where Ramaphosa described corruption in both the private and public sector as “the big issue” to address. He referred to the Steinhoff debacle for whom to date no one has been held accountable or charged.

Talking of the past very difficult few years”, Ramaphosa told Thursday’s lunch: “We now have a chance to depart from the past and move into the future”. DM