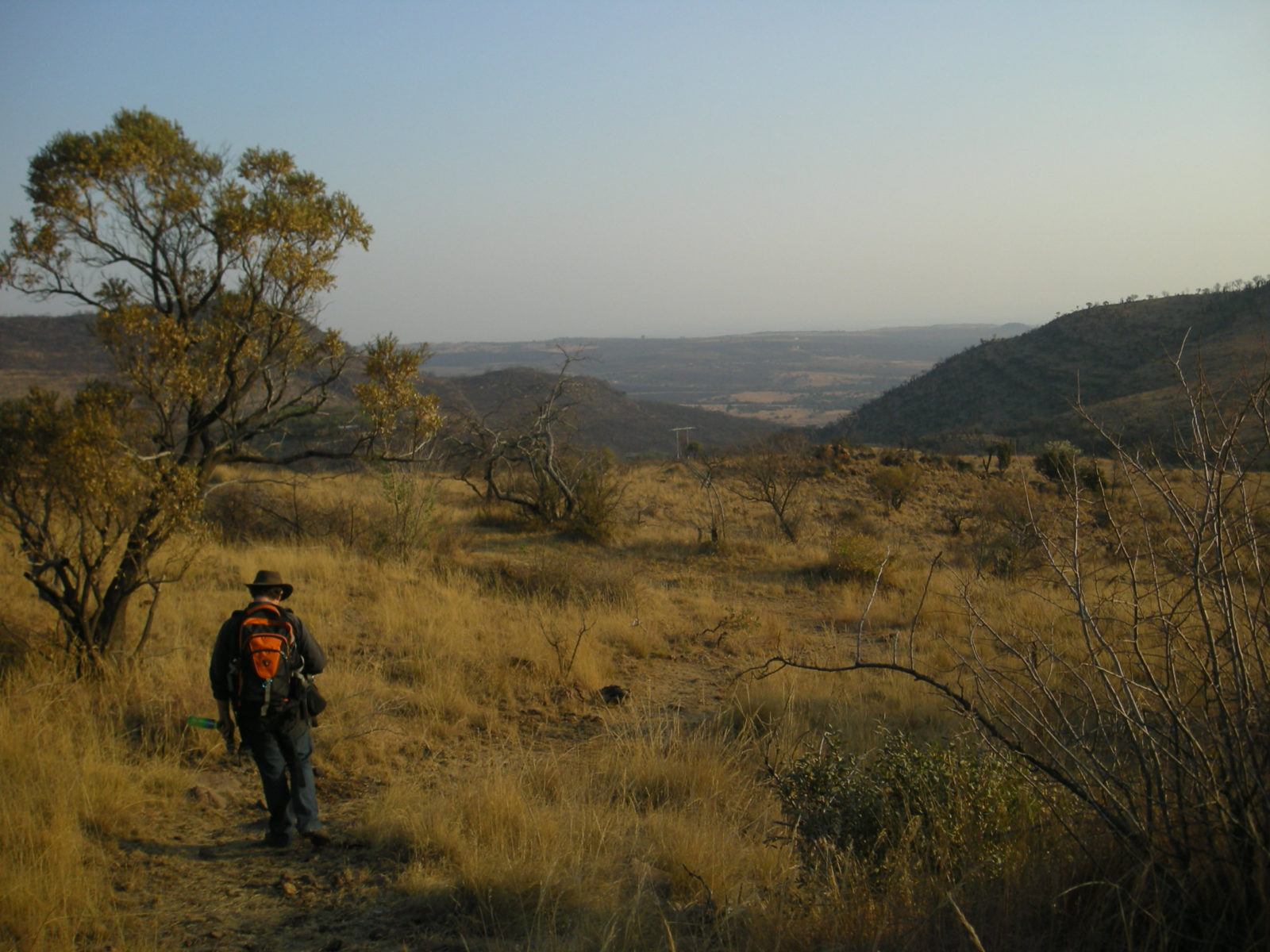 A typical Cradle of Humankind landscape today. At specific times in the past, this environment was much wetter and more vegetated than today. Credit: Robyn Pickering

Millions of years ago huge mammals roamed Africa alongside our earliest tool-bearing hominid ancestors. Did they kill some of the giants of Africa just as modern humans drove the woolly mammoths of Eurasia and gorilla-sized lemurs of Madagascar to extinction?

New research suggests they were unable to and that there was another evolutionary reason for this.

Most of the megaherbivores (species weighing more than 900kg) disappeared during the last 50,000 years as our species, Homo sapiens, spread across the globe. It is now clear that humans, equipped with advanced stone tools, were largely responsible for the demise of these large mammals, outside Africa.

But in Africa the story goes much further back in time.

New research published in the peer review journal Science, led by Prof Tyler Faith and colleagues, challenge the traditional “ancient impacts” hypothesis. They analysed megaherbivore diversity in eastern Africa — which features the longest, most well-documented history of hominid-mammal interaction in the world.

Faith, curator of archaeology at the Natural History Museum of Utah and the Department of Anthropology at the University of Utah, said in an email: “Our study focused on the last seven-million years, a timespan that encompasses all of human evolutionary history. That is long enough to capture the appearance and disappearance of numerous megaherbivore lineages.

“But let’s imagine, for example, that we were to travel back three-million years, to the time of ‘Lucy’ (Australopithecus afarensis) in Ethiopia. You might encounter three different species of giraffe, one of which (Sivatherium maurusium) was heavily built, with a short neck, and with elaborate horn-like projections that decorate the heads of living giraffes.

“Likewise, there were at least three elephant-like species, including a deinothere (Deinotherium bozasi), which broadly resembled living elephants but with downward-curving tusks projecting from the lower jaw. And on top of all this, we might also find two different species of hippopotamus, one similar in size to living species and the other a bit smaller. There was as also a pair of rhinos. The diversity was impressive, to say the least!” he said.

When and why these species disappeared has long been a mystery for archaeologists and palaeontologists, alike. Despite the evolution of tool-using and meat-eating hominids getting most of the blame, they are not to blame.

“Our analyses show that there is a steady, long-term decline of megaherbivore diversity beginning around 4.6-million years ago. This extinction process kicks in over a million years before the very earliest evidence for human ancestors making tools or butchering animal carcasses and well before the appearance of any hominid species realistically capable of hunting them, like Homo erectus,” Faith said.

The only other hominid who was around at the time of the start of the decline was Ardipithecus ramidus, a small-brained and ape-like human ancestor that lacked stone tools and at best hunted small prey like chimpanzees do today. Australopithecus africanus, (Mrs Ples) the well-known hominid from South Africa, is also much younger.

To test this they compared the record of extinctions in Africa with milestones in human evolution. For example, the earliest stone tools and mammal butchery (around 3.4 to 3.3-million years ago) and the first appearance of Homo erectus (around 1.9-million years ago). They made advanced stone hand-axes and ate meat.

Dr John Rowan, one of the co-authors, from the University of Massachusetts Amherst said: “It (the extinction of the megaherbivores) is instead gradual – playing out over nearly five-million years – long before the appearance of any hominid remotely capable of taking down rhino or elephant-sized prey. This suggests that widespread impacts on the large mammal species and terrestrial ecosystems might be unique to us – Homo sapiens.”

Faith said they made use of geochemical data obtained from megaherbivore tooth enamel that indicates the types of foods that they were eating. Mainly woody vegetation. The main culprits were falling atmospheric carbon dioxide (CO2) and the replacement of large shrubs and trees by grasslands.

It was a steady, long-term decline of diversity spanning the last 4.6-million with fewer and fewer megaherbivore species appearing in fossil sites. This resulted from the extinction of at least 28 megaherbivore lineages.

“We observed a preferential loss of species that fed on woody vegetation— this happened at the same time that grassland habitats were expanding in eastern Africa. Most likely, those species that consumed large amounts of woody vegetation also preferred woodland habitats, and as woodlands contracted, the megaherbivores disappeared along with their food source,” Faith said.

They could not survive in the new emerging landscape of the savannah.

In this very same savannah the hominids, our direct ancestors really started to thrive as time passed. This happened right here in the Cradle of Humankind, in Gauteng, a World Heritage Site made up of complex fossil-bearing caves.

It’s the world’s richest early hominid site and home to nearly 40% of all known human ancestor fossils, including the famous Australopithecus africanus (Mrs Ples), Paranthropus robustus, Australopithecus sediba, and the much younger Homo naledi. The last two species were only found the past 10 years.

Research published recently in the peer review journal Nature was led by Dr Robyn Pickering, geochemist at the University of Cape Town and Centre of Excellence in Palaeosciences, the first to provide a timeline for fossils from eight famous caves within the Cradle of Humankind.

Pickering said the caves sampled were Sterkfontein, Swartkrans, Drimolen, Malapa, Cooper’s, Bolt’s Farm, Hoogland and Haasgat. All of them are connected to several hominids fossils found since the late 1930’s.

Using uranium-lead dating, researchers analysed 28 flowstone layers that were found sandwiched between fossil-rich sediment in eight caves across the Cradle.

The results showed the fossils in these caves date to six narrow time-windows between 3.2 and 1.3-million years ago.

She told Daily Maverick that because the flowstones can only form during specific conditions, it must be wet. And the caves were closed during wetter times, and opened up during dryer times.

If soil or even dust is getting in, the flowstones will stop growing. “By dating the flowstones, we are picking out these times of increased rainfall. We therefore know that during the times in between, when the caves were open, the climate was drier and more like what we currently experience.”

This means the early hominids living in the Cradle experienced big changes in local climate, from wetter to drier conditions, at least six times between three and one-million years ago. However, only the drier times fossils are preserved in the caves, skewing the record of early human evolution.

“We are only seeing how they lived during dry times, more like today. What they ate, what their environment was like, the other animals around them, all represent a dry environment. We know the climate changed and was wetter, because this is when the flowstones formed. But this is also when the caves were closed,” said Pickering.

Dating fossils in the complex caves in the Cradle is difficult, whereas in East Africa volcanic ash layers allow for high resolution dating.

“In this study we show that the flowstones in the caves can act almost like the volcanic layers of East Africa, forming in different caves at the same time, allowing us to directly relate their sequences and fossils into a regional sequence,” Professor Andy Herries, a co-author in the study at La Trobe University in Australia, said.

Professor Bernard Wood, of the Centre for the Advanced Study of Human Paleobiology at the George Washington University in the US, who is not an author on the study said: “This is the most important advance to be made since the fossils themselves were discovered. Dates of fossils matter a lot. The value of the southern African evidence has been increased many-fold by this exemplary study of its temporal and depositional context.” DM