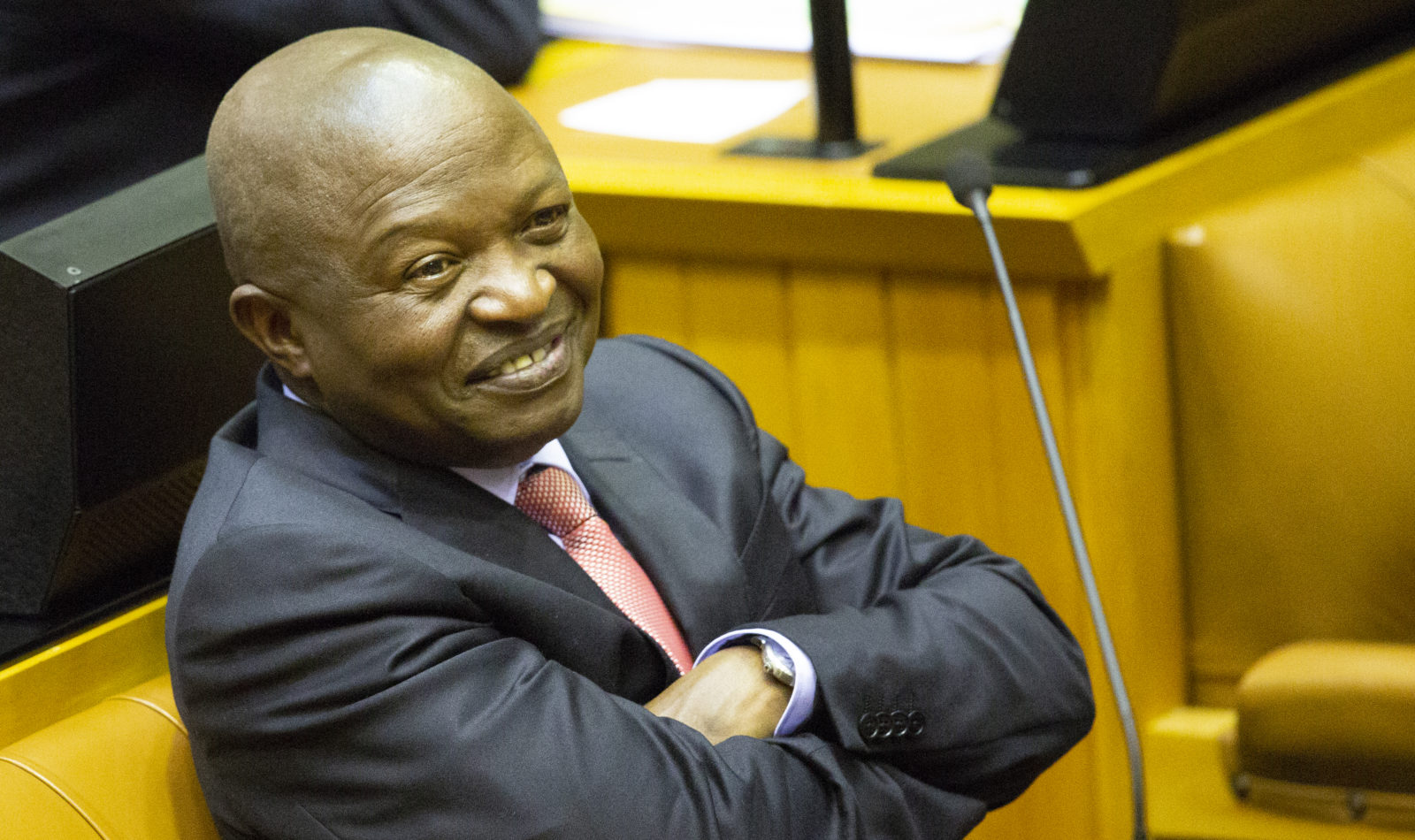 Around the time President Cyril Ramaphosa announced a new Cabinet at the Union Buildings, the National Assembly moved towards approving the rules on impeaching a president. It was on the Order Paper after Deputy President David ‘DD’ Mabuza’s question slot in the House, which happened at the same time as the executive reshuffle. Thursday’s odd timing aside, the House approval of the impeachment rules meant that 11 months after the Constitutional Court requested Parliament to fix this gap in its parliamentary rulebook, it was finally done.

It was unanimous. All political parties support the rules to give effect to Section 89 of the Constitution, the removal of a sitting president from office, or the new Rule129A. Those rules follow the ones on motions of no confidence in terms of Section 102 of the Constitution, which were adopted in 2014 after then DA parliamentary leader Lindiwe Mazibuko had successfully taken to court that gap in the rulebook.

Unanimity on Thursday did not mean the chance at some political point-scoring was missed during declarations from the podium.

DA Chief Whip John Steenhuisen reminded everyone in the House, although the ANC benches were sparsely occupied, how the governing party had protected former president Jacob Zuma, even if fingers are now being pointed in his direction from within the party regarding State Capture.

But it was a “myth” that one man entrenched and manipulated all, said Steenhuisen: “Anyone who believes that most probably still believes in Father Christmas or the Tooth Fairy. Mr Zuma was aided, abetted, defended and protected by the party that sits to the right of me (the ANC)”.

Speaking for the EFF, which took the impeachment rules lacuna to the Constitutional Court, resulting in the December 2017 judgment telling Parliament to fix that gap, EFF MP Mbuyiseni Ndlozi said this rule was long overdue, and should have happened within two months of the Constitutional Court ruling. And the new rule was a compromise as the EFF had wanted a judge to chair the panel inquiring into the removal of a president.

“It seems that the next person taken through this process is Ramaphosa. We must investigate as Parliament. We must put this rule to a test…”

The ANC was quick off the mark with a point of order. And House Chairperson Mmatlala Boroto asked Ndlozi to withdraw the comment as he was casting aspersions on the president. She did not accept his explanation that he had not cast any aspersions, but that it was his “suggestion we must test the rule of impeachment on him”. Ndlozi was ordered off the podium and out of the House.

If approved, the Speaker refers the matter to a panel of three, including a judge, whose verdict comes back to the House for a final determination. If receives the go ahead, the House will establish an impeachment committee and the removal process get under way.

The EFF push to test the new impeachment rules on Ramaphosa came as the opposition push-back continues over the R500,000 donation by Bosasa, now African Global Operations — not paid to his son Andile for services rendered as initially explained in the House — but paid into a trust for his ANC presidency campaign.

As DA leader Mmusi Maimane announced he would be leading a protest outside the head offices of African Global Operations, the company that has obtained an estimated R10-billion worth of contracts from government, the EFF asked Mabuza about possible donations he received. That’s after Mabuza told MPs he considered the Bosasa donation a closed chapter:

“The president has answered. If you want to pursue the question you can [communicate] directly with the president.”

The ANC was quick off the mark with a point of order about Ndlozi’s question on whether Mabuza had received donations for his campaign to become deputy president of the ANC.

Speaker Baleka Mbete said she found the question “strange” as the House didn’t deal with party politics — and left it to the deputy president to answer.

“Your question is a new question. I don’t think it’s relevant. If you insist, if it is agreed in your programming, I will have to answer… This time, it is a question I regard it as a new question and it involves the ANC I am not a treasures and not a spokesperson,” was Mabuza’s response, referring to the parliamentary rule that follow-up questions must relate to the original question.

Original questions are submitted days in advance and are therefore carefully prepared for delivery in the House. Follow-up questions that arise from the floor are spontaneous and can’t be scripted.

From Mabuza’s response it appears the ANC has decided on its strategy regarding that Bosasa donation, considering it as answered and therefore a closed book. Earlier on Thursday ANC Chief Whip Jackson Mthembu said Ramaphosa, in submitting a correction to Parliament having recognised his error, showed “good leadership” and it was a sign of people who are trusted in government, people that are “able to say ‘I was wrong. Here’s the correction’ ”.

And it’s not the first time, as Ramaphosa in August also corrected the figure the state was spending on former president Jacob Zuma’s legal fees.

“Nobody ever worried about this correction,” said Jackson, adding later that the continued opposition agitation over a payment that did not personally benefit Ramaphosa made it clear there was an election coming up.

“Throw as much mud at the person of President Cyril Ramaphosa, yes, you can do that ahead of the 2019 elections. But in terms of Parliament, you still bring a proper motion.”

The impeachment rules are now in force, but elsewhere the parliamentary rulebook may have given rise to some unintended consequences.

Parliament’s powers and privileges committee has decided to give the right of reply to suspended Secretary to Parliament Gengezi Mgidlana regarding EFF Chief Whip Floyd Shivambu’s statement during Parliament’s budget vote debate in May 2017 that the party had not supported Mgidlana’s appointment:

“We have known all along he was corrupt”. In a letter before the committee, and seen by Daily Maverick, Mgidlana said these comments did not relate to the subject of debate, but instead were “aimed at attacking my persona, character and professional integrity”.

After a 10-minute discussion on 15 November, according to the records of Parliamentary Monitoring Group (PMG), the committee agreed Rule 88, that bars MPs from impinging on judges and anyone the House appoints, applied also to the Secretary to Parliament. And therefore Mgidlana should have the right of reply, which according to powers and privileges committee chairperson Lemias Mashile:

“The administration here will put it together to respond to the ATC (Announcements, Tablings and Committee Reports)”.

What exactly that meant was not immediately clear, and the report of the committee that must go before the House has not yet been published. The crux of it will be in whether the whole one-and-a-half page letter from Mgidlana before the committee would be published as a right of reply, or just a part thereof. That’s because if the whole letter is published it would include this:

“I have requested that Parliament directs Honourable Shivambu to withdraw this statement in the House that referred to the unfair and unfounded statement to be expunged from this.”

And that would possibly require a whole new process. Redaction from the Hansard, which is the official complete transcript of a sitting, would be to the best of anyone’s knowledge highly unusual, if not unprecedented in democratic South Africa.

Until the powers and privileges committee report is published in the ATC this matter remains unclear. Also unclear is the impact of this right of reply decision on parliamentary privilege, or the right of MPs to speak in the House without fear of repercussions. Parliamentary privilege, for example, allowed Patricia de Lille as a then Pan-Africanist Congress MP in September 1999 to raise the need for an investigation into the arms deal corruption and its reach into the governing ANC.

Meanwhile, Parliament’s powers were tested on another front. Wednesday’s meeting between the Standing Committee on Public Accounts (Scopa), the national legislature’s watchdog on public spending, and the Public Investment Corporation (PIC), did not go ahead as the PIC instead came with a legal opinion that as some of the information was “confidential” it did not have to answer MPs questions.

It would have been an uncomfortable session as Scopa in early June set this date to find out more about a series of questionable investments by the PIC in, among others, the collapsed VBS Mutual Bank and Steinhoff. The PIC manages R2-trillion in assets of almost exclusively government workers pensions and savings.

Parliamentary Rule 167 allows committees to call anyone before them and request any information and documents. And while committees can be closed on request to the Speaker, it is seldom done because of the constitutional imperative in Section 59 that the public may not be excluded “unless it is reasonable and justifiable to do so in an open and democratic society”.

But this year has seen several instances when those before committees, particularly the SAPS, Hawks and the National Prosecuting Authority and SAA, cited sensitivities in order not to publicly discuss matters. It was rarely indulged.

Scopa chairperson Themba Godi said the PIC had to come to the committee “with the right frame of mind” . “Please give us the information and engage with us on areas of information you think are confidential.”

That PIC-Scopa meeting was rescheduled. What will happen then remains to be seen. DM