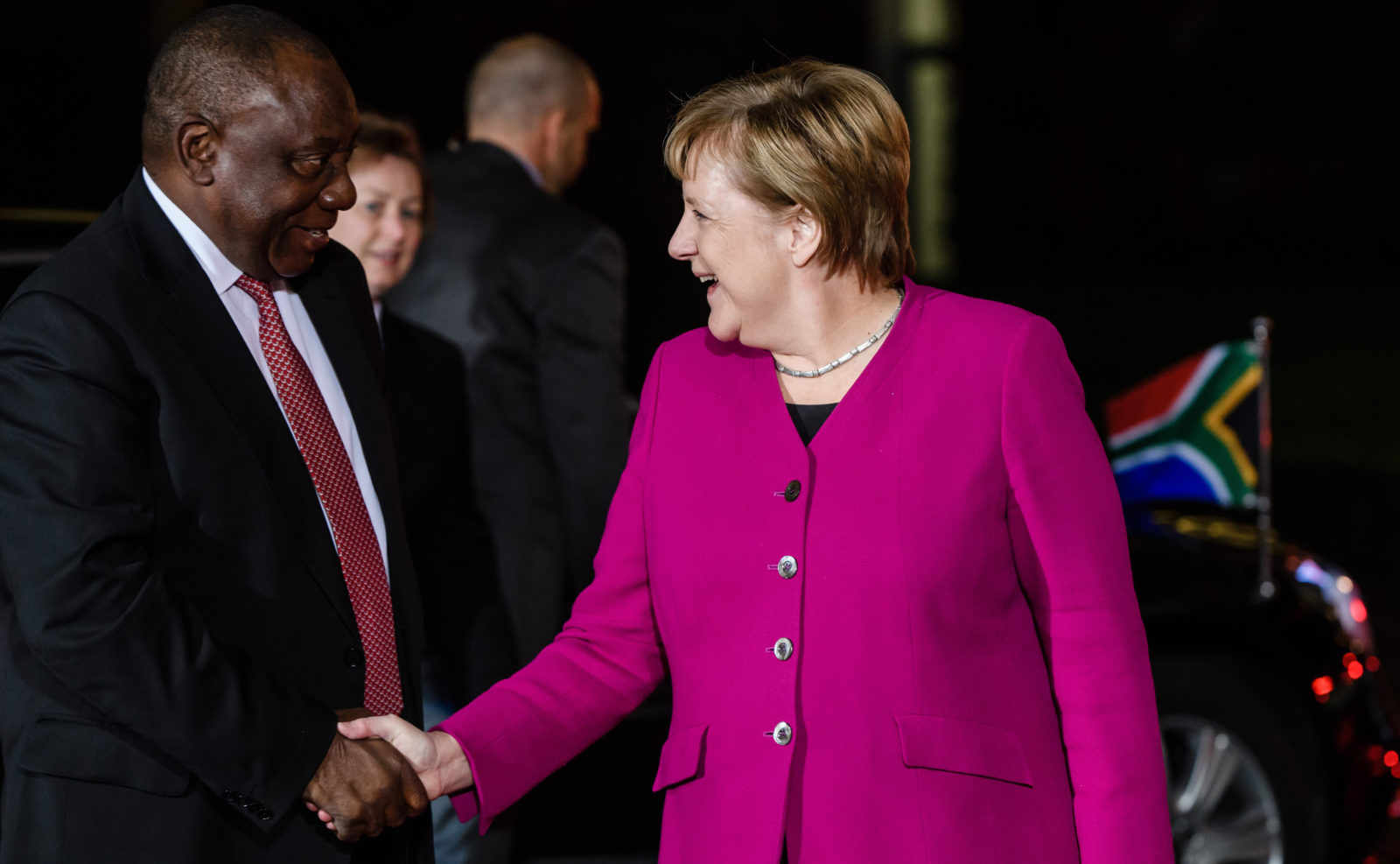 Cyril Ramaphosa came for a two-day visit to Berlin on 29 and 30 October to woo German businesses to invest in his country and by all accounts he has made great strides. He also succeeded in forging a closer relationship between Germany and South Africa after the fraught Jacob Zuma years. Both countries are currently serving on the UN Security Council.

On Monday 29 October, Ramaphosa held bi-lateral talks with Chancellor Angela Merkel aimed at closer co-operation between the two countries. The Presidency said in a statement after the meeting: “The President and the Chancellor also agreed on the importance of continuing with the G20 Compact with Africa initiative, and committed to an expansion of trade and investment between South Africa and Germany.”

Attending the G20 German Africa Investment Summit on 30 October 2018, a stone’s throw from the iconic Brandenburger Gate, once of a symbol of the divide between East and West, Ramaphosa was one of the three keynote speakers addressing the conference in his position as Co-Chair of the G20-Africa Advisory Group, declaring that “Africa is open for business.” The other speakers were Chancellor Angela Merkel and Rwanda’s President Paul Kagame.

Before the summit on Tuesday morning, Ramaphosa met with some key German business people over breakfast. German business, normally conservative investors and not great risk takers were impressed by Ramaphosa, whom they see as a businessman and “one of us”. There are 600 German businesses in South Africa, creating about 100,000 jobs.

Professor Wolfram Scharff, since 2005 one of South Africa’s honorary consuls from Dresden said after the meeting that: “What he said was solid, it was very convincing and very clear, logical and sustainable. I think everyone sitting at at the table this morning was absolutely excited.”

Scharff was echoing the sentiments of many participants when he said: “The difficulties facing new investments, down there has to do a bit more with the fear what is happening there. And I think it has already become much better in the last few months. I believe the turnaround is coming, that’s my impression and I think one has every chance of going in a positive direction in South Africa. We have to wait for the election but I’m confident.”

Not everyone in Germany shares his positive view and the German Foreign Office’s new Africa drive policy. At a recent closed-door meeting on South Africa attended by many former German diplomats, there were verbal clashes when some expressed their severe disillusionment with the African continent, including South Africa with one telling me “It is a lost continent”.

For decades Germany was South Africa’s biggest overall trading partner, resisting the call for sanctions of the apartheid state in the 1980’s to keep its companies in South Africa.

In 2010 it lost its prime position to China before last year dropping to its current third place behind the United States.

Most major German international companies are in South Africa which they have for decades seen as the “bridge to Africa”. Among the big players are Siemens, ThyssenKrupp and SAP, the car industry with BMW, Volkswagen and Mercedes Benz and pharmaceutical companies like Bayer.

In November 2015 Jacob Zuma paid a state visit to the Federal Republic of Germany. At that time, it was registered with some alarm by the political and economic classes in Berlin that the government in Pretoria was increasingly looking to Moscow, Beijing and other BRICS countries to strengthen their economic relations and was no longer focusing on Europe.

Still South African exports to Germany increased by just over 16% increase from 2016 to 2017 to 7.2-billion euros, which narrowed the trade deficit. In 2016 over 300,000 German tourists visited South Africa.

Scharff said that “in Germany there is a very, very long tradition with South Africa especially in the western federal states (the former West Germany). I think there is a big mass – there is not so much that moves in one direction or the other. In the long term it is a stable relationship that is going very well – sure, you have sometimes more fear and anxiety, sometimes less and sometimes things tend to run more or less smoothly. But if you look at the big players things are stable – there are some problems but nothing major in principle. The problems are home made.”

Among the home made problems he identifies difficulties with getting visas and work permits.

Scharff, who himself is based in Dresden, in Saxony in the former East Germany, rather sees the problems for investors from the former East Germany, that are mostly SME’s (Small and Medium Enterprises). These companies specialise in new water technologies, bio-technology, IT, electronics, software development, all areas that Scharff believes are also of interest for South African partners. However, unlike the big enterprises the risks are often too high for them to invest.

Scharff suggests that there should be more focus on SME cooperation between German and South African partners that would include internships and trainee programmes for South Africans in Germany.

Others at the meeting suggested that if one of the big players would do a major investment, it would be sending a signal to other to follow.

The summit under the patronage of German Chancellor Merkel and organised by the German-African Business Association saw 12 African heads of state and government meet in Berlin to improve investment conditions in selected African states. It is part of the “Compact with Africa” initiative which was launched during the German G20 presidency last year. The longer-term goal is to boost African economic growth, infrastructure, create jobs and thus curb illegal migration from Africa to Europe.

Merkel in her address said that it was time to start focusing on Africa as the next boom region after Asia.

”The Compact with Africa follows a different, a new approach – it is about an equal footing type of partnership, aiming to be long-lasting and benefit all equally,” she said

“Apart from strengthening Africa as a location for investment, it is also important to establish fair trade relations between Europe and Africa,” said Merkel.

She also announced a one-billion euro investment fund that should especially benefit SME’s.

The investment fund was proposed by the Africa Association of German Business. “If we succeed in using the one-billion euros as an effective lever to launch many more projects in African countries, this can be a milestone,” said chairperson Stefan Liebing, calling Merkel’s announcement “almost historic”. It is virtually only large German corporations that operate on the African continent as the German SME’s hardly dare to enter this risky market.

Since the former ANC Chief Whip, Stone Sizani arrived in Germany in late 2016 as South Africa’s Ambassador to Germany, he has been ceaselessly trying to attract investments but faced difficulties during the Zuma presidency. Speaking two weeks ago at a Mandela 100 event held in the Friedrich Ebert Foundation, the political foundation of the current junior ruling coalition partner the SPD (Social Democratic Party), Sizani said: “It has been difficult (attracting new investments) before December last year and it has been difficult afterwards. When I first came, business people told me to wait for last December to see what happens. Then when that happened and we got a new president, they told me wait for next year’s elections. We are tired of waiting.”

During the last year of the Zuma presidency Sizani surprised many in political Berlin and German business in meetings with his frank, no-holds barred views on the situation back in South Africa He was at that stage still a member of the ANC NEC.

At a National Day gathering in the embassy in April 2017 he went off script, pleading with his guests “The situation we face in South Africa is not forever, please stay with us.”

South Africa’s chief diplomats in Berlin have had a difficult time in the last few years selling the country as an attractive investment option.

Before Sizani became ambassador the embassy was without a chief diplomat for nearly 10 months in 2016. His predecessor, Makhenkesi Arnold Stofile, a former Minister of Sports and Mbeki supporter, also had a more difficult time in Berlin. Stofile was further handicapped by the fact that for part of his tenure the Consul-General in Munich, the heartland of the strong Bavarian industry, was a close Zuma confidante.

The consul-general’s tenure was marked by non-diplomatic staff resignations and damaging relations with businesses. A disciplinary report on her shenanigans in the Consulate according to insiders at the time apparently kept on slipping to the bottom of the pile for Stofile to sign off on. He apparently realised to do so at the time would have been political suicide.

Instead, he still had to play host to president Zuma on an official, tense state visit to Germany in November 2015. He got his own back. At his farewell a month later in the Embassy he introduced “one of my favourite people in South Africa at the moment and my guest of honour tonight”. It was Thuli Madonsela, at that stage still the Public Protector.

The days leading up to his farewell was drama-filled as the Minister of Arts and Culture Nathi Mthethwa was supposed to be present as diplomatic decorum dictates at such events. Mthethwa was already in The Hague when he cancelled at the last minute, which meant that the German representative also had to be downgraded.

South African diplomats in Berlin have indicated that their efforts and the Trevor Manuel blitz visit and now the Ramaphosa effect has already started to bear fruit with some investments in the pipeline.

The German newspaper Die Welt, in an opinion piece on the African investment summit, took up Scharff’s point: “The question remains whether the approach will be sufficient to persuade conservative, sometimes risk-averse German SMEs to invest in Africa and develop business opportunities there.

“I believe: no. Not a single company will therefore start new investments in Africa, because in future the tax systems will work better there, or the customs administrations. Instead, we need movement in two completely different areas.”

Those areas the paper argued will be: “Firstly, we need a new form of private-public distribution of risk when it comes to opening up new and risky markets. Mid-sized companies do not need and do not want subsidies for their business in Africa. What they need is the certainty that the federal government supports them when major problems arise.” Among the major problems the paper cites are ownership disputes and non-payments.

The paper goes on to state that “secondly, Germany must become more visible in Africa”. Compared to former colonial powers like the UK and France, Germany hardly has a presence on the continent, the paper argues. DM

Anli Serfontein is a South African journalist, author and documentary filmmaker based in Berlin.