Fire fighter anger shifts to Cape Town, with protesters claiming they are ‘overworked and underpaid’ 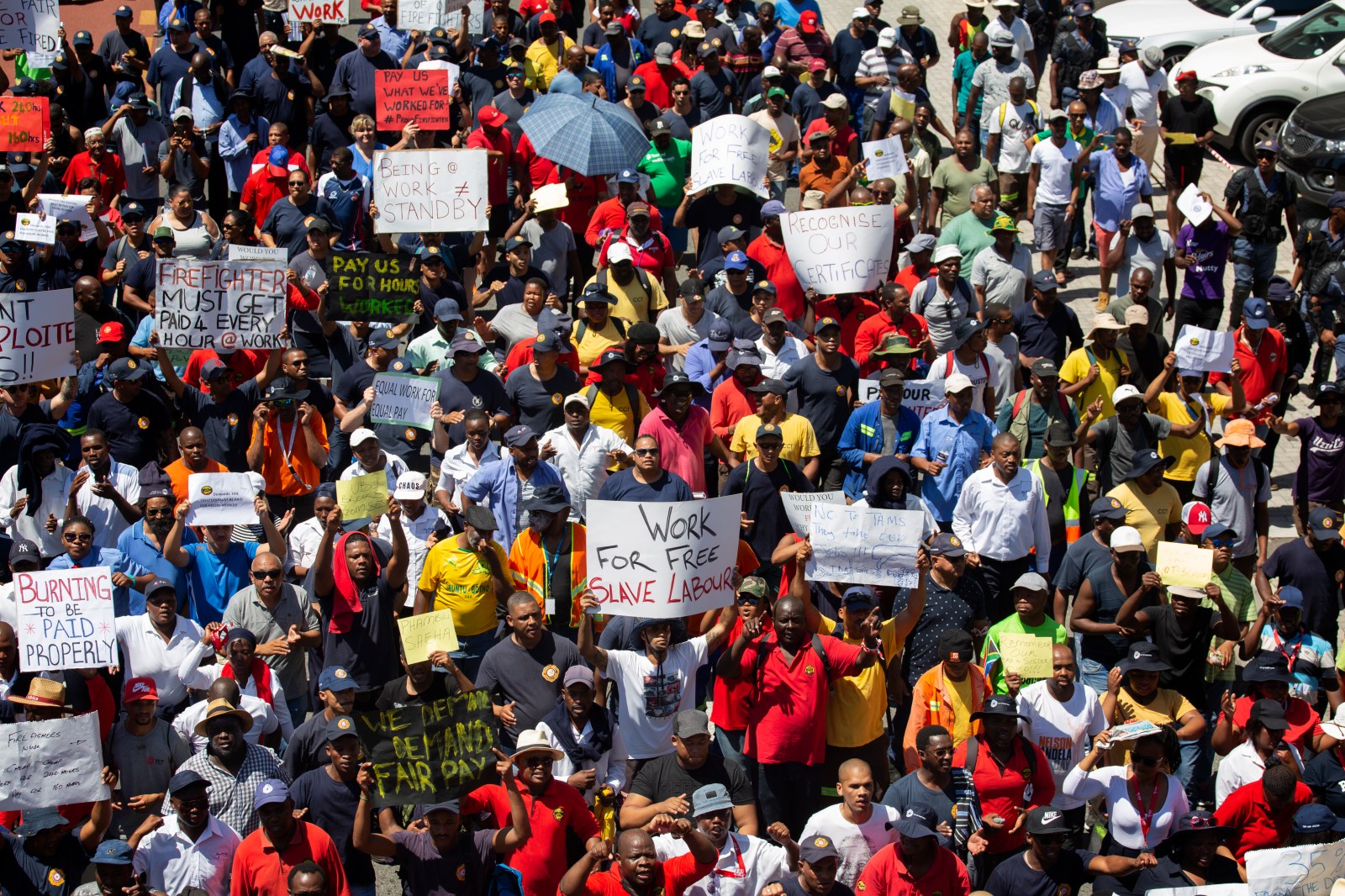 Fire fighters in Cape Town protested against working conditions in the city on Thursday, asking: “We must be paid overtime… We provide an important service to working-class citizens.”

Hundreds of members from the SA Municipal Workers Union (Samwu) marched to the Cape Town Civic Centre to deliver a memorandum of demands to city officials on Thursday morning.

The peaceful march was organised to draw attention to the grievances of fire fighters who claim that they are “overworked and underpaid”. A handful of Taxify, Uber and striking MyCiti employees also joined the march to show their support.

Samwu’s Xolani Diniso said fire fighters are not paid overtime and the allowance that is given in lieu of overtime is not sufficient.

The protest comes days after a devastating fire tore through Khayelitsha’s Town 2, leaving thousands homeless and killing resident, Sango Nqeneka, a backyard dweller last Saturday. Another blaze in Kosovo, an informal settlement in Philippi, destroyed over 120 shacks and displaced over 1,400 people on Sunday.

The demand from fire fighters in Cape Town follows a similar demand made in Johannesburg after a fire at the Bank of Lisbon building that claimed the lives of three fire fighters.

“We are a critical service and we want to be paid for the hours we work,” said Diniso. “When fire fighters work on a public holiday, they are not paid overtime. How can you be paid an allowance? We must be paid overtime… We provide an important service to working class citizens.”

Their list of demands includes the end of exploitation of fire fighters, abolishment of clocking machines and an end to the relocation of staff without proper consultation, among others.

“We find ourselves here to voice our concerns and displeasure in how (the city) is treating us. They are oppressing us. When there are problems of fires you, the fire fighters will be at the forefront,” Diniso said to the crowd.

Richard Bosman, director of the city’s safety and security directorate came to collect their list of demands at the Civic Centre steps but the leaders of the march refused to hand them over to him, saying that Bosman is already aware of their demands and has not responded adequately.

“Richard Bosman is involved in all the mischief we are fighting against so we can’t give him the memorandum, they must send someone else to come out,” said Xolile Ncayo, Samwu regional secretary.

Protesters momentarily blocked Hertzog Boulevard, with a heavy police presence, including more than 15 police vans and two nyalas, containing demonstrators and ushering them back to the steps of the Civic Centre.

“You are making us stand in the sun for something that is unnecessary with all the police here. We are your colleagues,” said Diniso to Employee Relations Manager at City of Cape Town Wesley van Heerden, City of Cape Town’s Safety and Security Directorate member Joe Barnes and Ernest Sass, Executive Director: Social Development and Early Childhood Development, who eventually came to meet the demonstrators outside the Civic Centre and collected their list of demands.