Plans to implement humanitarian aid projects in Africa stalled in a state of promises, not delivery 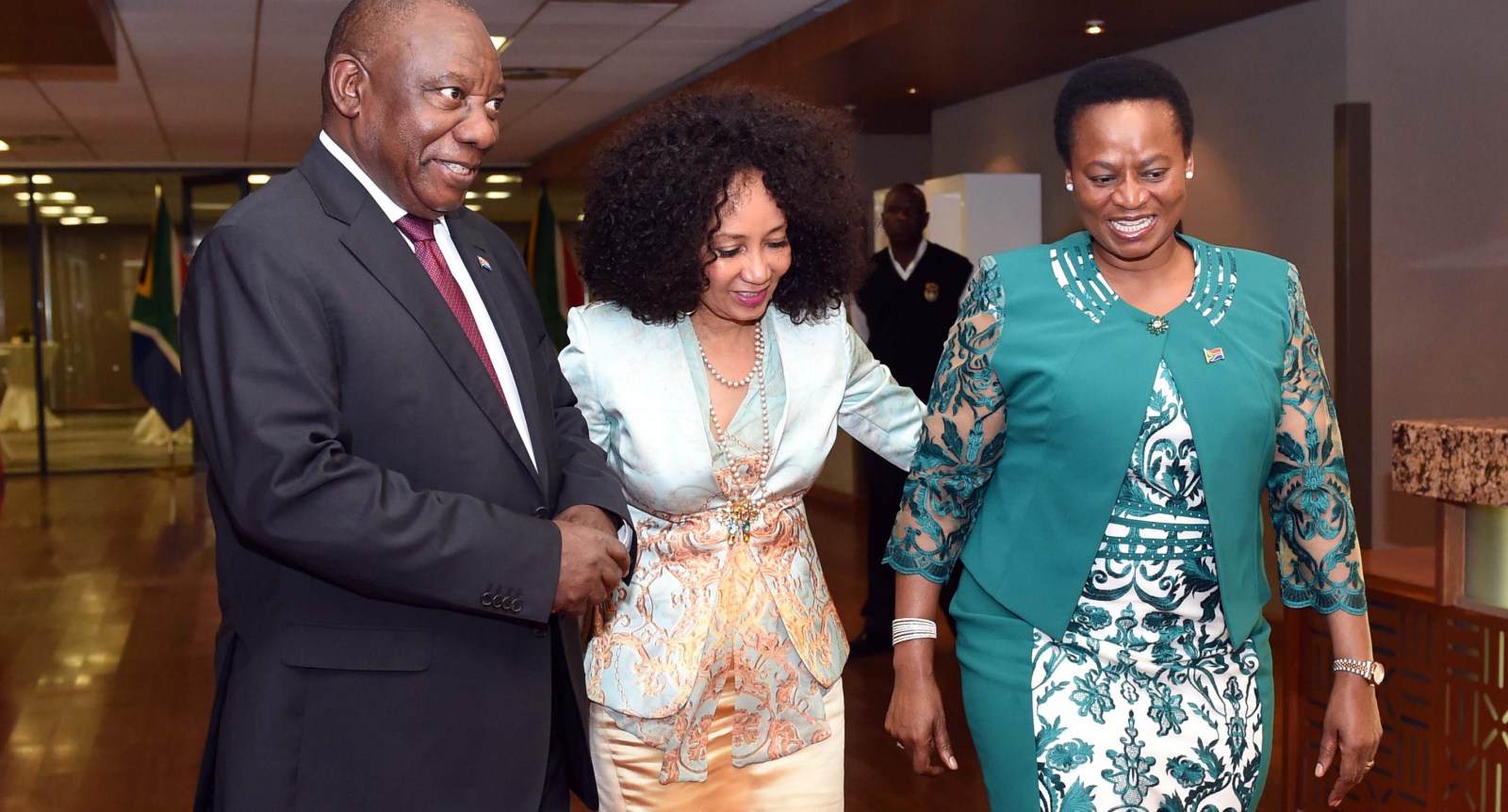 President Cyril Ramaphosa is received by Minister Lindiwe Sisulu and her deputy Nonceba Mhlauli at the OR Tambo Building, Department of International Relations and Cooperation in Pretoria. 14/09/2018 Photo: DNS/Katlholo Maifadi

Nine years ago there were lofty plans and a fair shot of enthusiasm to set up a well-funded agency dedicated to South Africa’s humanitarian efforts in the rest of the continent. An apparent lack of political will, a pushback against the export of State Capture, and general lack of direction mean the South African Development Partnership Agency has not been created yet, humanitarian aid is skeletal and sporadic, and millions allocated to it still remain unspent.

It’s been all fireworks, bling and starvation in eSwatini in 2018. The neighbouring kingdom celebrated the 50th anniversary of both its independence and King Mswati III’s birthday, for which the king got himself a jet for R700-million and a hangar at the country’s newly-constructed airport for R2-billion, and there was an election.

South Africa coincidentally also paid more than R16-million to the eSwatini government, according to the African Renaissance Fund’s annual report for the 2017/18 financial year, ostensibly because the country didn’t have money to feed its hungry children.

Whether the money paid to the Emergency Food Assistance Project ended up filling little tummies, our MPs don’t quite know. There’s been no report-back to Parliament about it, and it’s not even clear if the Department of International Relations and Co-operation (Dirco) monitored and verified the spending at all.

In the annual report there’s also a line about payments worth almost R1.8-million going towards the Rice and Vegetable Production Project in Guinea (Conakry) – apparently the last tranche needed for the closing down of the project. This entailed the payment of severance packages, as required by law there, MPs were told during a National Assembly portfolio committee for international relations meeting last Wednesday. This is on top of the at least R10-million that South Africa had poured into that project in the preceding two years. Again, it’s not clear what South Africa had to show for it, or what the country’s strategic purpose of this project was, but if severance packages were paid, it probably means the project wasn’t a raging success any more.

Namibia got R10-million for drought relief in the last financial year, Liberia got R14-million for its elections, the United Nations Relief and Works Agency for Palestine got R11.2-million for its work with women and children in Gaza, and, just 10 days ago, international relations deputy minister Luwellyn Landers handed over R10-million to Saharawi refugees in Algeria.

Despite all this, and a few million going to election observer missions in neighbouring countries, R600-million in the idealistically-named African Renaissance Fund (ARF) for South Africa’s humanitarian assistance efforts, lay there, unspent. Some of it was due to a lack of staff to implement aid projects, the other was related to pushback from a watchful National Treasury, trying to guard against the money being used for corrupt or personal purposes by the political principals at the time. Pravin Gordhan, before he was fired as finance minister in March 2017, was “forever closing the tap on the ARF”, the DA’s spokesperson for international relations, Stevens Mokgalapa, said.

Gordhan had serious questions about governance in Dirco, which was also part of the reason why the creation of the South African Development Partnership Agency (SADPA) was stalled. It was originally conceived in 2009 – a dedicated agency with capacity to implement and monitor aid projects – and it was supposed to have been up and running around 2011, but in 2018 it still finds itself in a state of promises.

In 2012, the South African Institute of International Affairs reported that SADPA’s budget would have been around R3-billion, about 10 times more than the ARF’s is now. The upside, however, would have been that SADPA would have a board advising how South Africa should apply its humanitarian aid, as well as mechanisms to implement and monitor – which is why, Mokgalapa said, MPs wanted Dirco to make the agency happen.

According to a briefing report compiled by the parliamentary researcher for last week’s committee meeting, the ARF incurred irregular expenditure “due to lack of operational policies and procedures … as well as lack of human capacity, leading to non-compliance with the applicable supply chain management laws and regulations”. The portfolio committee has been advocating for a permanent secretariat for the ARF, but much prefers “an urgent migration to SADPA”.

Already, R9-million has been disbursed to Dirco to operationalise SADPA, but committee members wanted to know where the money went since SADPA wasn’t up and running yet. Finalisation of the Partnership Fund for Development Bill, aimed at repealing the African Renaissance and International Co-operation Fund Act of 2000, is, however, said to be in progress – much like in the past nine years before this.

During a briefing in 2012, then deputy minister Marius Fransman assembled some of the major relief organisations in South Africa to explain how SADPA would work in conjunction with these agencies to speed up humanitarian assistance to the rest of the continent. The idea was that SADPA would be a homegrown solution to African problems, and it would enhance South Africa’s soft power and image on a continent where the country is lately often viewed as a xenophobic, arrogant bully.

How South Africans themselves would view such an agency is another question, and it arose during a February 2016 National Council of Provinces trade and international relations committee meeting. Ambassador Ebrahim Saley, then Chief Operations Officer for Dirco, responded by giving examples of how humanitarian aid to neighbours could help South Africa too. Meal assistance to Lesotho, for instance, could help kick-start small-scale farmers in South Africa. Also, if people got help in their own country, they wouldn’t leave for South Africa as economic migrants.

Speaking to a gathering of South Africa’s ambassadors at Dirco’s headquarters in Pretoria on Tuesday, on the eve of his much-vaunted investment conference, President Cyril Ramaphosa said: “South Africa and its fortunes are inextricably linked to those of the continent.”

He said the people in the rest of Africa extended a hand of friendship and solidarity to South Africa “during the dark days of apartheid”.

Maybe, then, the time has come to actually give some back too. DM