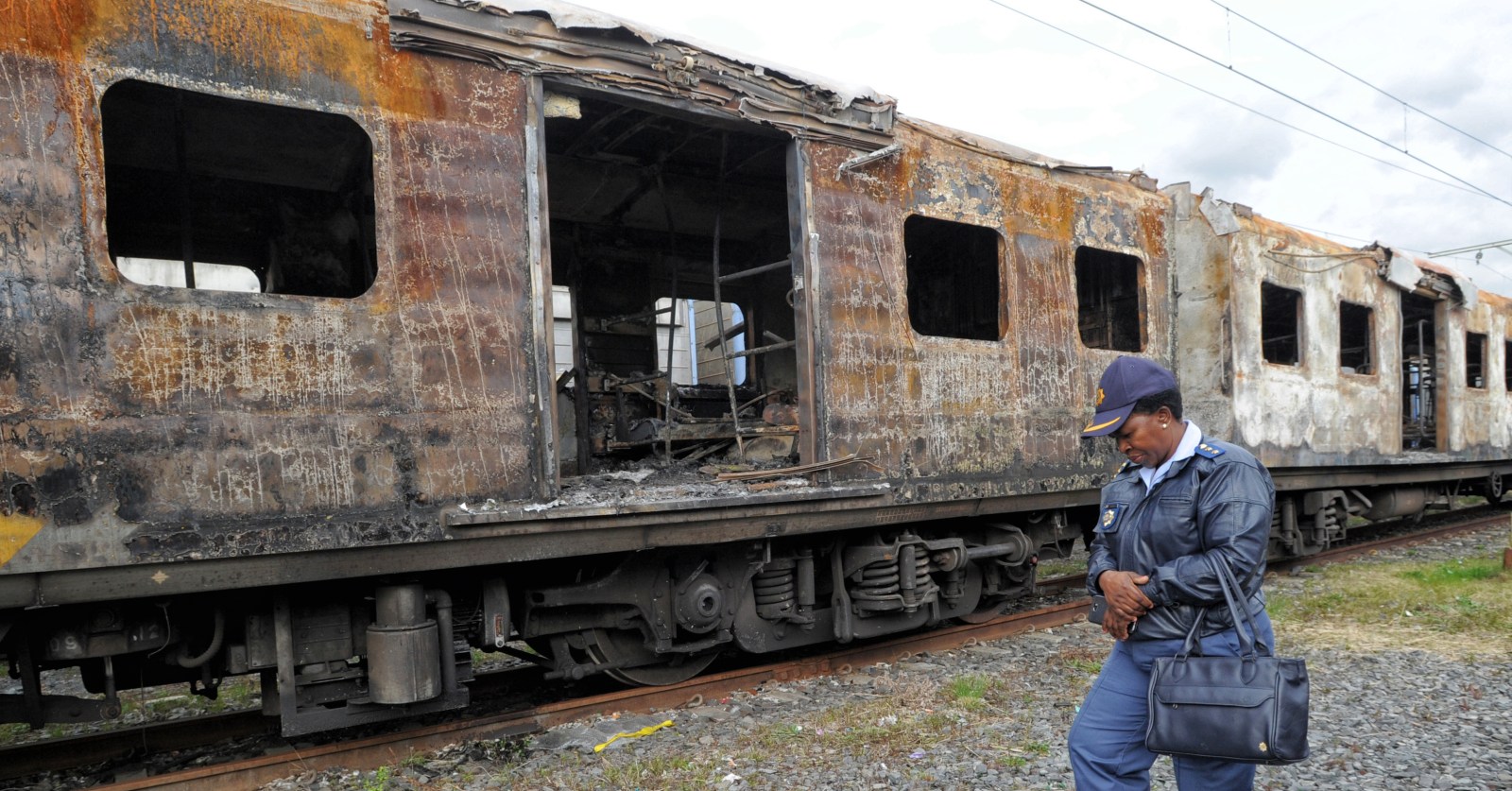 PAARDEN EILAND, SOUTH AFRICA - JULY 27: Burnt carriages during the walk-about at the Metrorail depot in Paarden Eiland on July 27, 2018 in Paarden Eiland, South Africa. Dr Blaze Nzimande (Minister of Transport) and other delegates, visited the depot to views the damages to the PRASA infrastructure sustained during the arson attacks on Metrorail trains in Cape Town. (Photo by Gallo Images/Brenton Geach)

The Passenger Rail Agency of South Africa (Prasa) was scheduled to appear before Parliament to discuss its annual report and financial statements – but there was concern that board officials were still looking at the ongoing problems commuters face at Metrorail through ‘rose-coloured glasses’.

The board and management should not to be too optimistic about its plans for modernising train services at Metrorail when the current services leave much to be desired, said Magadzi.

The chair of the committee described her experience monitoring commuters when they go about their daily routine travelling between work, school and home as “torture” because of a lack of safety and overcrowding which then leads to people hanging out of trains.

“What are they doing to fix the problems today?” asked DA MP Manny de Freitas of Prasa officials, who added that every time he talks about the entity he gets depressed.

But earlier during the meeting, interim board chair of Prasa, Khanyisile Kweyama, told the committee the rail agency had a 12-point plan to get operations running smoothly and management would be available to address the committee on the plan.

This issue came up after Railway Safety Regulator board chair Nomusa Zethu Qunta told the committee they had not yet seen Prasa’s 12-point plan after two meetings between the boards.

Prasa’s Annual Report was not without controversy: this report was submitted late to Parliament and the previous report was handed in almost one year late.

During the 2017/2018 financial year, 1,519 Metrorail coaches were lost to vandalism – thefts and train burnings – with most such incidents having taken place in Gauteng and the Western Cape. At the moment, there are only 174 train sets available nationally while Prasa requires 256 train sets to operate efficiently.

The main reason for the decline in train sets is due to vandalism and arson attacks on train sets. Between May and October, there were reports of up to eight incidents of arson attacks at Cape Town train stations alone.

The most recent one – which happened while MPs were discussing the burning of trains – on Tuesday 9 October has a lasting effects on commuters. Trains on the notorious Central Line since the arson attack has been consistently delayed for more than 60 minutes. The Central Line is the biggest rail line in Cape Town and runs between the city and areas such as Bellville, Khayelitsha and Mitchells Plain.

Prasa Acting Rail CEO Martha Ngoye said Prasa’s plans were not “lip service” and that management was committed to getting the rail agency in order again.

In the annual report, Prasa states that the Phillipi station on the Central Line is 98% complete. Prasa said it has plans to restore the Central Line in 2018, increase train availability during peak hours and reduce crime-related incidents in the next financial year. DM

Read earlier articles on the problems facing commuters due to Prasa woes here: