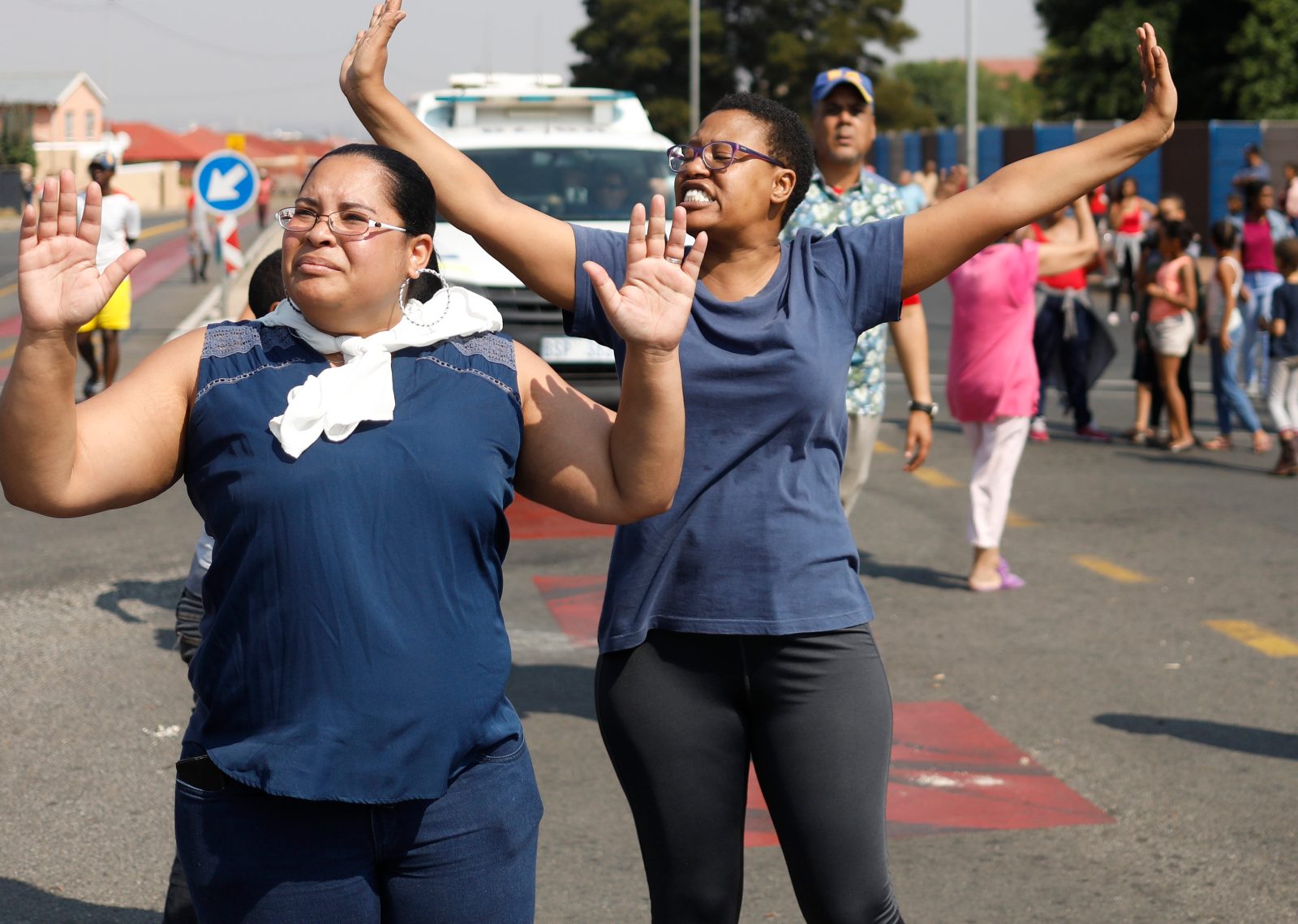 Women stop police officers from coming closer by raising their hands during a protest following the murder of a women by gang members overnight, Johannesburg, South Africa, 28 September 2018. EPA-EFE/KIM LUDBROOK

The problem is not just rising crime, but falling public confidence in the police and especially the courts. By Lizette Lancaster

Crime in South Africa is rising, and understandably, people feel unsafe – in their streets, their parks and their homes. Solutions to crime don’t rest with the police and courts alone, but criminal justice system reform is necessary for tackling certain crimes, as are social and economic investments for bringing down others.

The latest Victims of Crime Survey for the period 1 April 2017 to 31 March 2018 shows that 7.5% of households in South Africa experienced at least one of the 13 crime types measured.

One in five households reported feeling unsafe in their neighbourhoods during the day and two out of three felt unsafe at night. While safety at night has remained largely unchanged for the past decade, perceived safety during the day has declined by 9% since 2010/11. This is significant.

These findings are contextualised by the crimes reported to the South African Police Service (SAPS) and released annually as statistics. Police crime statistics show that since 2011/12, the country has seen substantial increases in the number of murders (31%), attempted murders (24%) and all major categories of aggravated robbery (37%) including carjacking (73%), street robbery (36%), house robbery (33%) and business robbery (26%).

The victim survey gives a better understanding of the proportion of crime reported to police (Figure 1). Generally, murders have high reporting rates because bodies can be counted. Most car thefts and hijackings are also typically reported because insurance companies require case numbers to process claims. The survey indicated that 89% of murders, 78% of car thefts and 70% of vehicle hijackings are reported to the police.

Other types of crime are under-reported even though they are the offences that people fear a great deal: 59% of house robbery victims and 51% of burglary victims reported these crimes to the police. Only 36% of victims reported street robberies, even though knives and guns were used in nearly all these attacks.

When people lose their property to theft (which unlike robbery doesn’t involve the use of weapons or force against individuals), very few go to the police – only 24% reported theft of personal property such as cellphones.

Less than half of assault victims (47%) reported the attack to police. According to the survey, one-third of assaults occurred at home and a quarter in the street in a residential area. This underscores the fact that assaults often stem from inter-personal conflict between friends, relatives or intimate partners and may, therefore, be regarded by victims as a personal rather than a criminal matter.

Victims report crime if they believe the police will help them find justice, or because they think it’s the right thing to do, or for insurance reasons. So reporting rates will vary from person to person, area to area, and by crime type – and depend heavily on satisfaction with the police and courts.

This probably explains why the SAPS statistics show a decrease in robbery and assault. According to the survey, people are experiencing more crime but fewer victims are reporting incidents to the police. This explains why police think that certain crime categories are decreasing.

South Africans have become increasingly dissatisfied with the courts too – in fact, much more so than with the police. In 2011/12 and 2013/14, 64% of respondents were satisfied with the courts. This fell to 41% in 2017/18 – a 23% drop in six years. Those who were unhappy felt the courts were too lenient (46%), while 17% said they released perpetrators unconditionally, and 14% thought that matters dragged on for too long.

In response to growing feelings of insecurity and declining satisfaction with the criminal justice system, people are increasingly taking responsibility for their own safety. More than half of households implemented some physical measures to protect their homes, 11% relied on private security despite the cost,3.5% belonged to a “self-help group”, and 4% took to carrying a weapon for protection.

While the issue is not covered by the survey, there is a substantial amount of vigilantism in South Africa – showing that people are also taking matters of justice into their own hands. The SAPS statistics revealed that there were 849 murders associated with “mob justice” in 2017/18.

After a decade of deterioration under former president Jacob Zuma, South Africa’s new political leaders have their work cut out for them. They must move quickly to fix the criminal justice system while promoting primary violence prevention interventions if South Africa is to improve its levels of public safety. DM