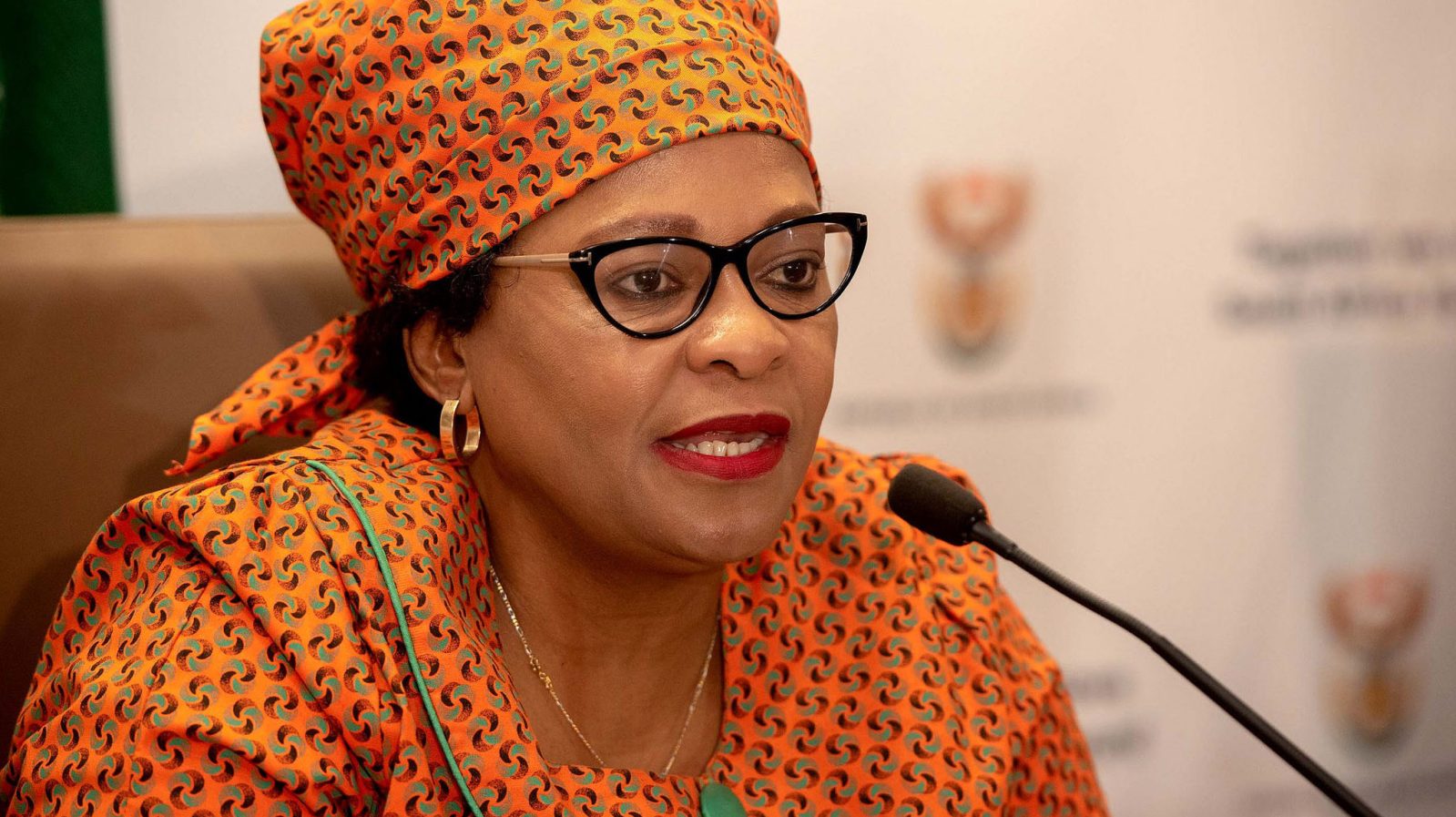 Then Communications Minister Nomvula Mokonyane briefs the media on the outcomes of a Cabinet Meeting, dated 19 September 2018. (Photos: GCIS)

Public Protector Busisiwe Mkhwebane was in Parliament again on Thursday, not to be told about that pending decision on an inquiry into her fitness for office, but to present her annual report. It was civil and brief. MPs are fully focused on the sausage factory of departmental and entities’ annual reports which must be completed next week. Meanwhile, across Parliament Avenue, Cabinet announced two policy flip-flops – one on the digital migration set-top boxes, the other on how the petrol price is done.

It’s that time of the year. At any given time, 20 and more committees are sitting to plough through annual reports, including the audited financial statements and performance assessments. They’re long days – some committees have not only a department but also anything between four to 24 entities reporting – made longer as in 2018 the whole budget review and recommendation reports (BRRR) process is concentrated into just two weeks. Ahead of the 2019 elections, the longer constituency periods that parliamentarians accord themselves are important.

This BRRR process is part of Parliament’s oversight and preparation for the Medium-Term Budget Policy Statement (MTBPS), to be delivered by newly minted Finance Minister Tito Mboweni on 24 October. But the MTBPS is also dominating Cabinet, which has been briefed on what is set to be a tricky maiden delivery for the finance minister, given the low growth, stubbornly high joblessness and lack of spare cash in the national coffers.

And so perhaps it’s not unsurprising Cabinet ditched its policy on set-top boxes, in place for several years. They’re the gadgets subsidised for poor households as South Africa moves from analogue to digital. The saving? R5-billion, as it emerged at Thursday’s briefing by Communications Minister Nomvula Mokonyane on the Cabinet meeting of the day before.

This is how. Government will no longer procure, distribute and connect these set-top boxes for around five million poor households, a project that was costing R7-billion. By going hybrid – “a market/retail driven approach through collaborations and partnership with the private sector”, said the Cabinet statement – costs are cut to R2-billion.

“Those who are supposed to be cushioned will still be, just not though set-top boxes… There are considerations of vouchers, hence we are working with the retail sector, manufacturing, MultiChoice and SABC,” said Mokonyane, also in reference to an advisory council that was established for this process. “Yes, we will be saving.”

To date the set-top box project has cost R10-billion, including warehousing costs of these gadgets that will now be taken out of mothballs and distributed – and connected – first in the Free State, North West and Northern Cape.

It’s a wholesale policy change but – were it not for the responses solicited by journalists’ questions in the traditional post-Cabinet briefing – you wouldn’t know it from the Cabinet statement where a total of 95 words were dedicated to this aspect of digital migration.

“Cabinet approved a revised delivery model on implementation of the Broadcast Digital Migration Project. The model adopts a market/retail-driven approach through collaboration and partnerships with the private sector and industry. With this approach, government will no longer be involved in the procurement of set-top boxes, warehousing, transportation and installation of devices. This provides South Africa with headway towards the completion of the project in a manner that is inclusive, affordable and efficient, and that reduces risk to government. This will push digital viewership migration to the 85% threshold and beyond, towards switching off all analogue broadcasts.”

Neither did Thursday’s official Cabinet statement say anything about the petrol price change discussions, but Energy Minister Jeff Radebe was at hand. And so it emerged that there’s a possible policy change in the making – a cap on the price of 93 octane unleaded petrol.

Consultations with the petroleum sector started last week, and the industry had until 18 October to respond to the feasibility and impact of a price cap. Radebe declined to comment on specifics at this stage.

“I have an open mind on this question. My overriding consideration is to cushion the vulnerable…”

If there’s a petrol price cap it would require either the industry to absorb costs, largely incurred through the rand-dollar exchange rate and rising oil prices, or government to slice back on the R5.30 worth of fuel and Road Accident Fund taxes it collects. Those levies were substantially increasing in February’s Budget, alongside the value-added tax (VAT) hike to 15%, to make up for a tax collection shortfall. And if government decides, that will affect revenue collection – and how much is available. More detail is expected in the MTBPS later in October.

Until then, MPs have their work cut out. And to show MPs and committees are working, a surge of public statements attempt to capture at least some of the concerns during this key but conveyer belt-like period.

The human settlement committee indicated general satisfaction with the department and eight entities that came under scrutiny over two days, except that an urgent turnaround plan was needed “to intervene to save the institutions from total collapse” – the Estate Agency Affairs Board (EAAB) and Community Schemes Ombud Services (CSOS) – according to one statement.

Meanwhile, the justice committee statement noted how the National Prosecuting Authority (NPA) was working “hard under difficult circumstances” with a vacancy rate of 19%.

“We have noted further that the NPA also had to increase its spending on wellness programmes, which could be seen to have a direct link to overworked personnel.”

And the higher education committee, after its interaction with National Student Financial Aid Scheme (NSFAS), expressed its concern about the scheme’s regression to a qualified audit. There should be consequences for the increased irregular expenditure. Or as this committee statement said: “No effort should be spared in improving the skills base the country requires in order to eradicate unemployment. Any regression in accounting on expenditure negates these objectives.”

And then there was the curious undertaking by the communications committee to fill the four vacancies on the SABC board following an appeal made during the public broadcaster’s briefing on its qualified annual report. That statement amounts to the committee saying it will do its job as required by the Broadcasting Act.

And so it goes.

But in these pressure cooker days there’s been one concrete decision: no more extensions to wrap the question of a constitutional amendment for land expropriation without compensation. The constitutional review committee on Wednesday decided the report must be finalised and go before the House either on 26 or 28 November, effectively the last two sittings of the 2018 parliamentary year. Parliament rises at the end of November for the year-end recess until early February 2019.

Back to the public protector.

It was a brief, and somehow lacklustre, two-hour meeting in which Mkhwebane often referred to the Constitution, and argued it was not an indication of standard of work that 14 of her 50 reports are being taken to court, but the outcome of the Nkandla Constitutional Court ruling of March 2016.

The focus was squarely on the annual report. But that’s just for now and the matter of the inquiry into removing Mkhwebane remains on the to-do list.

“Nobody must think the matter of us holding the view she’s not fit for office has disappeared,” said DA MP Glynnis Breytenbach.

For the first time in a long time on Thursday, Deputy Public Protector Kevin Malunga was actually allowed to speak. There’s been a meeting or two when he did not even accompany Mkhwebane, and the few times he was with her delegation, he didn’t utter a word. But it seems his function as trainer of investigators – officially known as “capacity building” – since 17 April has been expanded to heading the project to clear the backlog of cases older than two years. Some of that work appears to have to do with checking though PowerPoint presentations, it seemed from Thursday’s discussions.

The public protector got an unqualified audit, with findings largely centred on irregular expenditure of just over R19-million and fruitless and wasteful expenditure of R1.4-million, caused by South African Revenue Service (SARS) penalty interest, vehicle accidents and travel booking cancellations.

The justice committee wasn’t quite impressed. Financial statements submitted for auditing had not been prepared as required by the Public Finance Management Act. Apparently that’s because the public protector has outsourced audit services to a private company, and “has not exercised sufficient oversight responsibility, as there were numerous misstatements in the financial statement”, the committee said in a statement. And there’s still no permanent chief financial officer at the Office of the Public Protector, amid a revolving door of senior managers.