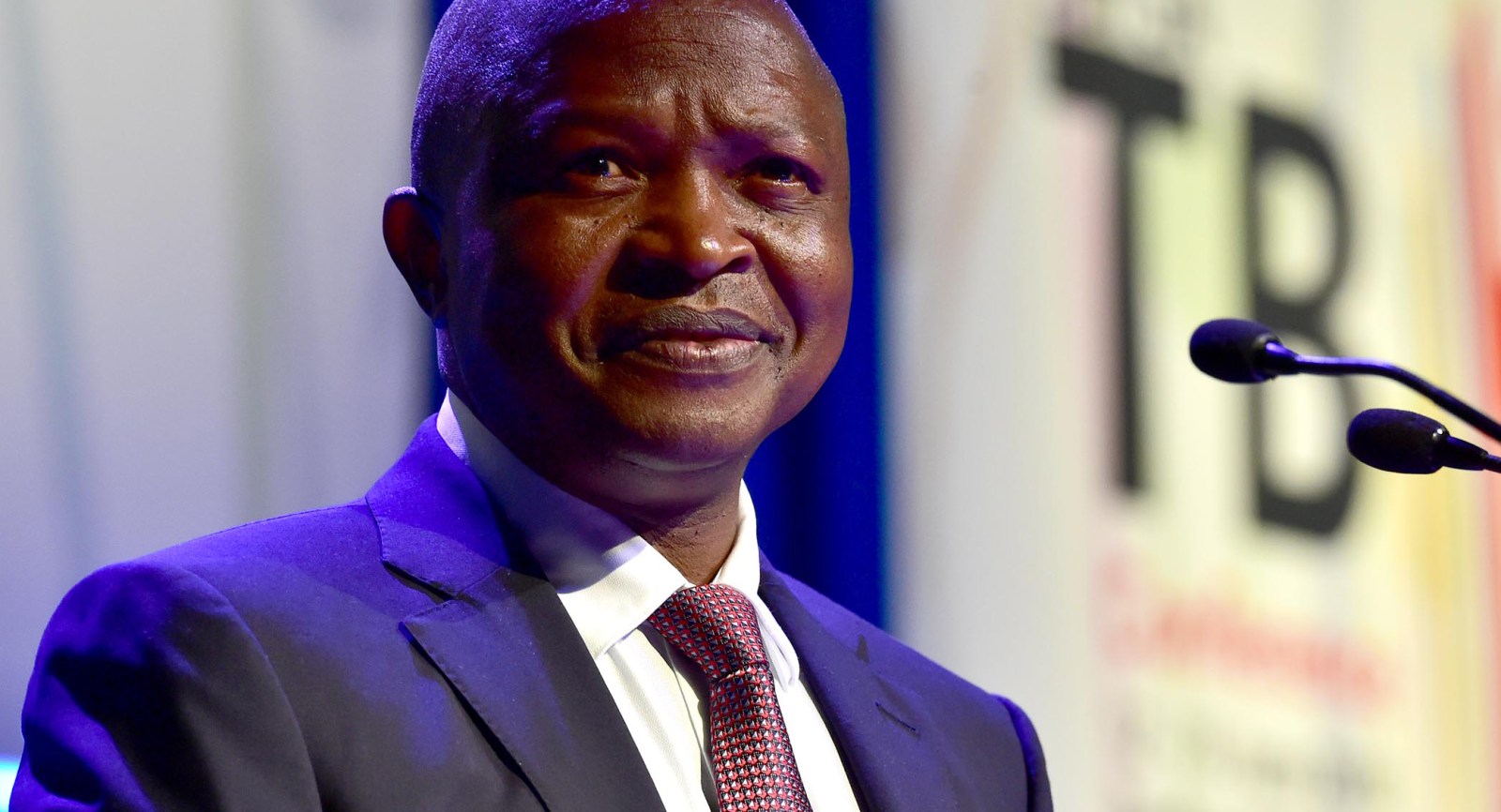 SA Deputy President David Mabuza has played an interesting role since his election as deputy leader of the ANC at Nasrec, and now. There is much to speculate about that role, considering a brief look at the history of his position will demonstrate that Presidents Thabo Mbeki, Kgalema Motlanthe, Jacob Zuma and Cyril Ramaphosa were all at one stage in their career occupying Mabuza’s current job. It appears, though, that Mabuza is working extra-hard, almost to legitimise himself in the eyes of South African public. From the outside, it is a fascinating dance to watch; still, there is no certainty as to whether he will be successful in rehabilitating his image in the eyes of most voters.

When it emerged that David Mabuza had managed to garner more ANC branch nominations than any other leader just before the Nasrec vote, there was a collective gasp from the commentariat. His history is long and, allegedly, inglorious. Mabuza was what was called a “provincial strongman”, one of those provincial leaders (they are all men) who had managed to turn Mpumalanga into literally his fiefdom. Those with longer memories recalled how Mzilikazi wa Afrika, the Sunday Times investigative reporter, ended up in jail in 2010, allegedly on Mabuza’s orders. Then there were the stories around a supposed hit man and assassinations. None of this has been proved, but the claim was based on an affidavit from a man who swore he took money from Mabuza to kill someone.

(It’s important to point out that Mabuza has never been charged, or even, as far as is publicly known, necessarily been formally investigated.)

Then there was Mabuza’s strange path of power. It appeared, after his appointment as Deputy President by Ramaphosa, that his main strength really lay only in the fact that the two sides at Nasrec were so evenly matched. If that had not been the case, if this had been a Polokwane scenario, the votes that he brought would not have mattered. Some of the analysis at the time believed he was still vulnerable, as he is, or was, barely tolerated by the Ramaphosa side (who needed him to win) and he had betrayed the other, Zuma side (some called them the Premier League).

According to many, Mabuza was left in a perpetually precarious position. And yet.

One thing that appears to be undoubted is Mabuza’s ambition. The path out of provincial and into national politics is difficult; very few people have managed it successfully within the ANC. While some people have been strongly supported from provinces, they also had national followings. Zuma was backed by KwaZulu-Natal, but had strong support around the country; Mbeki was supported by the Eastern Cape but he had started from his own national constituency, and so on. Mabuza has managed to get to this position with virtually no support outside Mpumalanga, making his transition potentially harder than it has been for others before him.

Since his appointment to the Deputy Presidency, it can surely not be denied that he has been what you could call a model Deputy President. Wherever he goes, he appears to toe Ramaphosa’s line.

The political analyst Ralph Mathekga and others have noted how he appears to be trying almost to rehabilitate his image. While Ramaphosa was meeting with the CEO of AgriSA in a bid to limit the land debate damage, Mabuza was leading an ANC delegation meeting with other officials from the same body. A few days later, Mabuza was at a farmers’ event hosted by AgriSA and the magazine Landbou Weekblad. His message was simple: this debate around land expropriation should not damage social cohesion.

Then, on Heritage Day Monday, he continued with the message. He was quoted by Business Day as saying this:

“It is understandable that human beings are prone, in times of national strife, in times of bitter socioeconomic hardship, in times of hard debates about land reform, to retreat easily into narrow nationalist, racial and ethnic enclaves… However I stand in front of you on this day to state with conviction that this path we have chosen is the correct one.”

It is, perhaps, the best diagnosis of the debate and the impact it is having on society that has yet been offered by a leading figure within the ANC. There was more to come:

“Despite our fears we must remember that the land is vast, our soil is rich, the belly of our earth is pregnant with hope and possibility, our minerals are overflowing and our oceans are teeming with potential… We have enough to create wealth, prosperity, opportunity and development for all.”

By any standards, this is top-class political speech-writing. It is perhaps the best written political statement since Ramaphosa’s own “we are a nation that… damaged by our past, numbed by our present, and hesitant about our future” at the funeral of Winnie Madikizela-Mandela. Certainly, for a nation that has not been treated to well-written political speeches in English over the last decade, it comes as a breath of fresh air.

The quality of the writing of Mabuza’s speeches (it is not known whether he writes them himself) suggests that he, and his team, are taking them seriously. That simple fact, in turn, suggests that he realises what he needs to do: to change the image that many people have of him. The land debate, which is dominated by the radical voices on all sides of the argument, is the perfect opportunity for him to appear statesmanlike. He appears to be using that opportunity to full effect.

It also appears that he is more than willing to use the opportunity that is being presented by Zuma and ANC Secretary-General Ace Magashule. One way for Mabuza to gain favour with those who oppose corruption is to be the hit man for Ramaphosa on the Zuma/Magashule faction. Already, earlier this year, Mabuza sharply criticised Magashule in the National Assembly (and thus on TV) for spending R20-million on a “farewell party” for himself from the province of the Free State. Magashule’s current problems, and his now close-to-open defiance of Ramaphosa, may well present a similar opportunity for Mabuza to do the same again.

However, this approach does have its limits. Mabuza has not, as far as is known, granted interviews since becoming Deputy President, and it appears unlikely that he will do so for some time. This could be an indication that he still has much to fear; he knows that interviews can be difficult to control, and that he may have difficult questions to answer.

There are also other problems he faces. There are several people who have over the years become Mabuza’s enemies. One of them is former ANC Treasurer Mathews Phosa. Speaking on SAfm on Friday, Phosa denied hating Mabuza, but said, “I hate some of the things that he does”. There is ancient bad blood between them, and, if you have presidential ambitions, Phosa is not the kind of enemy you want to have.

And then there are the claims against him themselves. It is not just that he has been accused, if not formally, of being involved in a murder. There is also that front page report in the New York Times to contend with, which suggested he had used state resources to fund a political campaign. The fact that ANC members in Mpumalanga were prepared to be named on the record while speaking against him could suggest they have important political cover themselves. And this is the kind of case that can return at almost any time.

It could also be the case that the power that Mabuza held in December, the power only to slip the balance of power slightly, may start to ebb over time. Ramaphosa may feel he doesn’t need Mabuza if his own political power starts to increase over time (and there are indications that that is happening). This could leave Mabuza exposed at some point in the future.

While it can be difficult to judge how powerful someone is in the ANC at any one time, the elections may provide a useful tool. It will be interesting to see how often Mabuza appears on ANC election posters. At the same time, it is possible that opposition parties, particularly the DA, decide it is easier to campaign against Mabuza than it is to campaign against Ramaphosa. This could even lead to the confounding sight of Mabuza appearing on more DA posters than ANC posters.

It has been said many times that our politics is difficult to predict. In some ways, as recent conflicting polls may indicate, it is actually becoming harder. This makes it difficult to predict Mabuza’s future. While he does appear to still have a steep mountain to climb to gain the trust of much of the voting public, he is not one to give up trying. DM