Mzilikazi wa Afrika and the Shape of Things to Come

Mzilikazi wa Afrika and the Shape of Things to Come 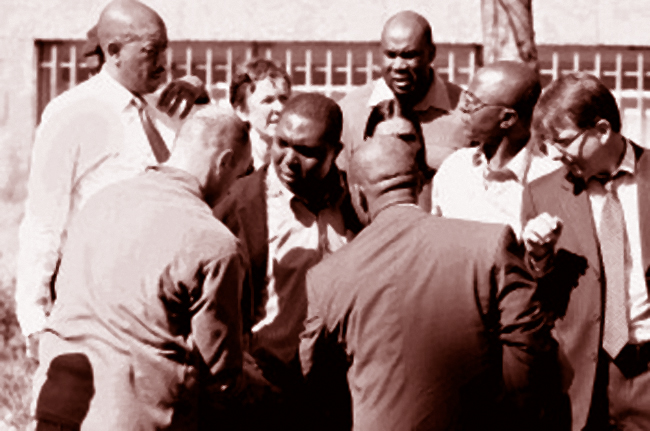 We cannot imagine the fear, the gut-churning oily awful fear that gripped Mzilikazi wa Afrika when he was taken away on Wednesday. He says he thought he was going to be killed. An unmarked car, men with guns, refusing to listen to him, irrationally forceful and aggressive. Then the huge fight to keep him in their power. The 2:30 am interrogation. The questions about whether he was part of a group trying to destabilise the provincial ANC. Yes, the ANC, not the province or the country.

Kafka would have been proud of our officials. First, there’s the late-night high court application, the claim that it would be “too inconvenient” to release Wa Afrika when he was due in court just a few hours later. Really, what kind of a lawyer could ever say that? And which jack-booted hooligan tries to enforce this kind of nonsense? Then just a few hours later, Wa Afrika appears, at the appointed time in Regional Courtroom One in Nelspruit. And it’s just him, and his lawyers. The first person to burst through the door at 8:32am was actually a low-flying radio reporter. It was a little sad really, you expect huge drama, the Hawks ready to go and all you get are empty wooden benches.

Eventually, things started to move at around 9:15am, when Wa Afrika’s lawyer was compelled to stand up and explain that the whole show was going upstairs, to a packed Regional Courtroom Two. All the benches were taken up by Nelspruit residents there for the humdrum rape, murder and assault cases. The grumbling reporters, including Wa Afrika himself, were forced to lean on walls for support. When it did start, it was a blink-and-you’d’-have- missed-it affair. Bail agreed, conditions satisfactory to both parties, see you in November.

Outside the court a hostile crowd was growing. These were angry people, claiming that Wa Afrika was destabilising the ANC. They wanted to shout, scream and heckle; that job was done very well. Wa Afrika’s lawyer popped out to tell reporters not to worry, he’d be out soon to thank everyone for their support. The crowd didn’t like that. They were not there to support him. If they could, they’d bury him. His lawyer, Eric van den Berg, an old hand, read the crowd’s mood and made sure his client didn’t have to go through all that.

But the crowd itself was fascinating. This reporter found himself having to count to 10 when told by one of its members that Wa Afrika was guilty of treason. The logic was this; Mabuza is a premier, therefore he’s like a governor, therefore if you take him on, you’re taking on the province. That’s right, ladies and gentleman. Nigeria, just three hours down the N4 from the heart of Johannesburg.

So many questions after this week. Here’s just a flavour:

Who decided Wa Afrika should be arrested?

Was it a police officer?

Was it Bheki Cele?

All of the above?

Who really decided he should be charged? The moment this really passed into illegality was not at the time of the arrest, it was when a prosecutor decided on Thursday that there was no evidence to back up a case. Then the Hawks tell us there was “engagement”. Really? With whom? Was it Pretoria? Or Nelspruit? Who has the power to overrule a prosecutor? Simelane must have been involved, one way or another. And who was the one to phone him? It must have been Mabuza, or his representative. We’ve said it before this week,  this is ANC deployment in action. This is what happens when a political party is not happy with just controlling all the political levers of power, but needs to control absolutely everything. And then when things go wrong, and that becomes public, kill the messenger. Why not. You’ll get away with it.

And that’s the sad, sorry story of Wa Afrika’s arrest. That no one, not Mabuza, not Simelane and certainly not Cele will ever face any punishment for this. You know it and we know it.

This week has seen the cancer of Mpumalanga politics get a national face. We now all know there is something deeply wrong in the province. And that it’s only because this happened to a journalist from a paper with the nous and the money to do something about it that he’s free now. What would have happened if some swastika armband-wearing functionary had decided this was all classified and that the public doesn’t need to know anything? And under the Protection of Information Act, many would have the power to do it.

And if that’s not scary enough, understand this. The symbol of today was not Wa Afrika walking free, or the angry misguided crowd outside the court. It was the Hawks officers who came into the court room in riot gear. With guns, tear-gas and those vests that bring the menace. And sun-glasses in a court room. It’s them, the foot soldiers who are going to claim one day that they were just following orders that will do the kicking pushing shoving hurting and perhaps killing. We need to know who really controls them. It’s certainly not the people of this country.

Shape of Things to Come indeed.