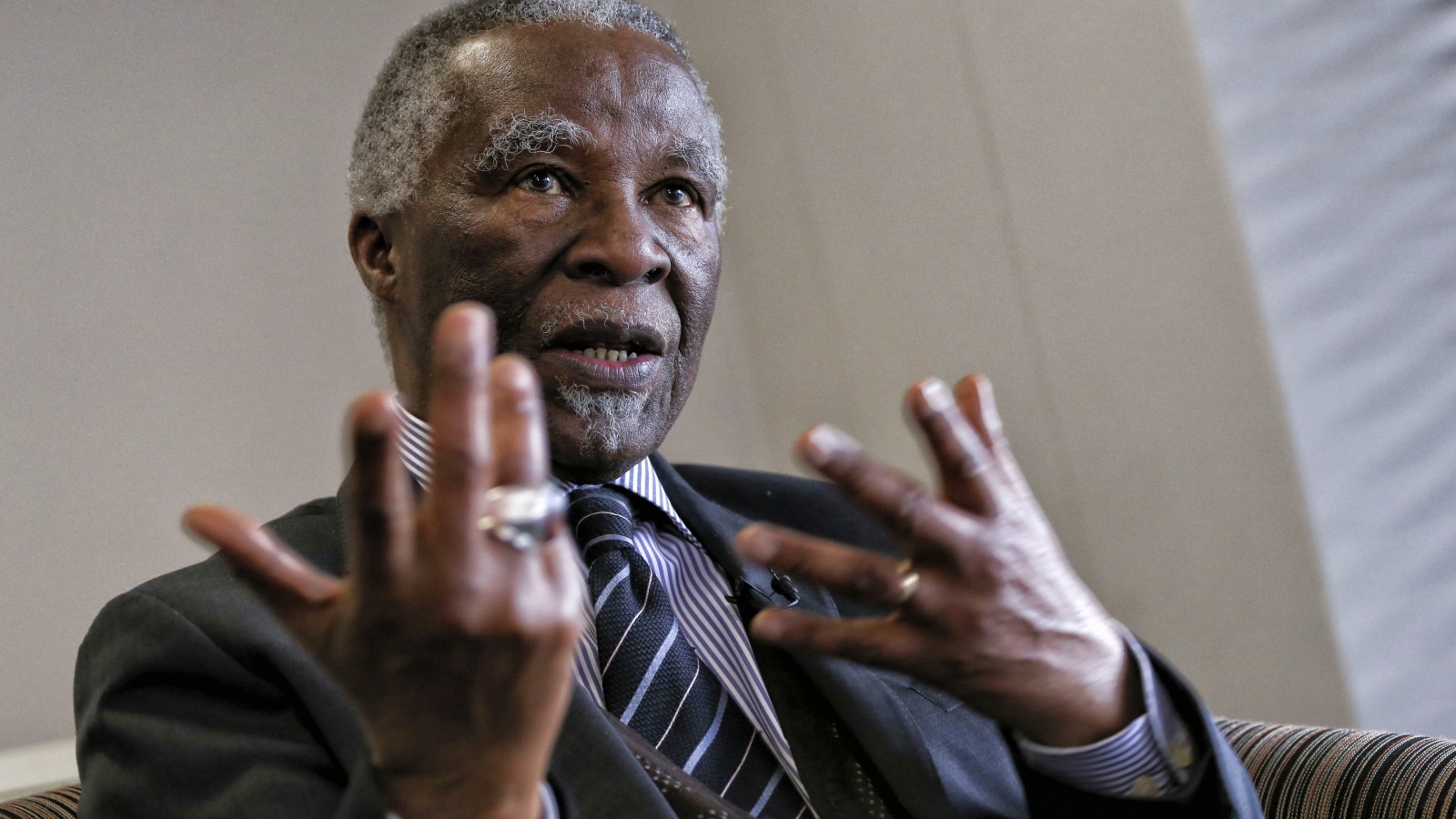 Former president Thabo Mbeki’s foundation has laid out strong views on the land debate in a leaked 30-page pamphlet in which the ANC is lashed for abandoning the party’s non-racial principles in its framing of the discussion. To say that land should be taken from whites and given to blacks amounts to a betrayal of the ANC’s identity, argues the document – which also suggests that Cope leader Mosiuoa Lekota’s concerns about the process are “very legitimate”.

When the ANC conference at Nasrec in 2017 adopted the principle of land expropriation without compensation, it was a “radical departure” from party policy that has not been adequately justified.

That is the view from the Foundation of former president Thabo Mbeki, contained in a leaked 30-page document dated September 2018 and titled What Then About Land Expropriation Without Compensation?.

The author of the pamphlet is not specified – but in both style and tone it bears all the hallmarks of Mbeki’s own writing.

The document accuses the current ANC leadership of endangering the “noble historic ideological and political positions on the building of united humane societies which the ANC has upheld throughout the years of existence”.

In particular, it suggests that the framing of the land debate as motivated by a desire to take land from white people and give it to black people is an affront to the non-racialism which has been embedded in the ANC’s DNA since its inception.

The argument repeatedly returns to the Freedom Charter affirmation that “South Africa belongs to all who live in it: black and white”.

It was a refusal to accept this principle that caused the Pan-Africanist Congress to break away from the ANC in 1959, the document notes. But ANC leadership at the time was motivated to reject a “narrow, racialistic and chauvinistic nationalism”. The author hints that the current ANC administration is in danger of flirting with this now.

If the ANC has abandoned the tenets of the Freedom Charter, the author writes wryly, then it should publicise a rephrased version which would read: “South Africa belongs to all who live in it, black and white, except as this relates to land.”

The Mbeki Foundation document acknowledges the devastating scale and effect of the “original sin” of “massive land dispossession” of black Africans. It also affirms the right of the state to expropriate land without compensation “in the public interest”.

What the former president primarily objects to, it appears, is the framing of the discussion.

The document demands that the ANC should walk back the “very unfortunate claim” it has made that “it supports land expropriation without compensation because it must correct an historical injustice, thus to punish the descendants of the European Settler populations of the 17th, 18th and 19th centuries and theoretically reward those who were disadvantaged by these Settler populations”.

In the author’s view, South Africa’s situation is unique on the African continent because of the size of its white population.

“Ours is essentially the only formerly colonised African country where millions of the descendants of the former Colonial Settlers remained as resident citizens after the country’s liberation from colonial and apartheid rule,” it states.

The document turns to ANC history to make the point that the party’s founders and former leaders took a conscious decision to include white people in the resolution of what it calls the “National Question”.

It seems clear that the document lays the blame for the ANC’s apparent shift in positioning in this regard largely at the feet of former ANC president Jacob Zuma.

An occasion is cited in March 2017 when Zuma, addressing the National Council of Provinces, referred to the ANC as a “black party”.

For Zuma to do this, states the document, was to advance “a fundamental redefinition of both what the ANC is and its historic mission”.

The pamphlet also comes out in support of former Mbeki ally and current Congress of the People (Cope) president Mosiuoa Lekota, who has expressed opposition to the prospect of land expropriation without compensation – to the point of publicly arguing with EFF leader Julius Malema during land headings in Limpopo in June.

“He asked – given that the ANC had resolved to expropriate land and transfer it to those the ANC described as ‘our people’ – who in this equation were not ‘our people’ in terms of long established ANC policy?”

“The truth is that the ANC leadership has not answered this very legitimate question, except through heckling Lekota to silence him.”

The former president’s memo affirms that it is valid for the ANC to have been challenged on the slow pace of redistribution, more than two decades after the advent of democracy – though it does not explicitly take responsibility for any inaction under Mbeki’s presidential watch.

It suggests, however, that in response to the land challenge, the party should have embarked on a process of internal review. The purpose of this review would have been to answer questions such as: “how many people among the formerly oppressed actually want to become tillers of the land, both as active farm owners and farm workers?”

The document also argues that although agriculture contributes relatively little to South Africa’s Gross Domestic Product (GDP), its significance to the country’s economy should not be underestimated.

The current ANC leadership also comes in for criticism for not doing enough to involve the private sector in the land debate.

For land policies to succeed without damaging the economy, it states, it “requires the conscious involvement and support of private capital”.

The document is likely to cause some consternation within the current ANC leadership. Although Mbeki did previously criticise the direction taken by the ANC under President Jacob Zuma, he has never before offered as unvarnished and detailed a critique of an ANC policy position. And while the Thabo Mbeki Foundation may attempt to claim that Mbeki himself did not personally author the pamphlet, the similarities to the former president’s other writings are impossible to ignore. DM