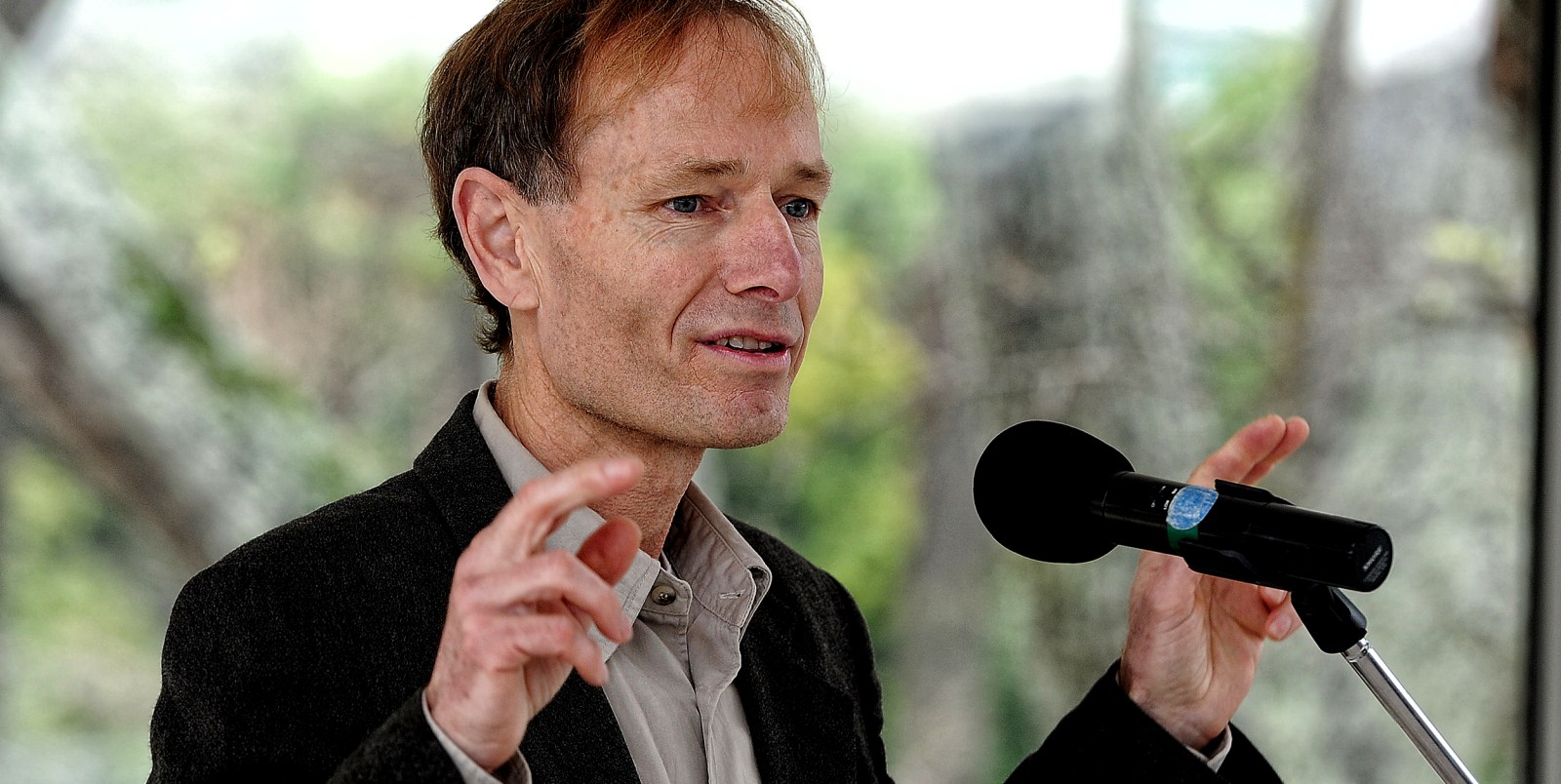 Two weeks after a World Federation of Right to Die Societies conference in Cape Town hosted by Dignity SA, police arrested Professor Sean Davison, director and founder of the organisation, on a charge of murder. Davison’s arrest is related to the suicide of quadriplegic, Dr Anrich Burger, in a Cape Town hotel room in 2013.

For over five years Professor Sean Davison, founder and director of Dignity SA which has been lobbying for a change to end-of-life legislation in South Africa, has openly and publicly spoken about the death of his friend, Dr Anrich Burger, one afternoon in November 2013 in a hotel room at Cape Town’s Waterfront.

Davison has tenderly recounted the last moments of Burger’s life at several lectures, talks and conferences and has always maintained, when questioned, that he had nothing to fear from the law as he had not done anything illegal.

Which is why the arrest of Davison, who was sentenced to five months’ house arrest in Dunedin New Zealand after he helped his terminally ill mother Patricia to die in 2006, has come as a surprise to those involved in Dignity SA and who know the professor of biotechnology.

Professor Willem Landman, Executive Committee Member for Dignity SA, said on Wednesday that there was speculation that those who were vociferously opposed to legalising assisted dying might have prompted the NPA to action after so many years.

Landman added that Dignity SA was lobbying for a change to South African law to bring it in line with the Constitution but that it did not “assist people to die – what anyone does in their private capacity is their own matter”.

Davison was arrested after a police raid on his Pinelands home on Tuesday where a phone and a laptop were seized. The professor was held overnight in the Sea Point police cells before his bail application in the Cape Town magistrate’s court on Wednesday. He was released on R20,000 bail and will appear again on 16 November.

The state is charging Davison with the planned and premeditated murder of Burger. Prosecutor Megan Blows informed the court that “new information has come to light … the accused might have committed similar offences”.

Davison’s lawyer, Joshua Greef, read from an affidavit in which Davison stated that “it is and has always been my contention that I have not committed any offence as alleged in this matter”.

Burger, who was 43 when he consumed a lethal dose of phenobarbital while Davison sat with him in the hotel room, had been confined to a wheelchair after an accident in Botswana in 2005. Burger had had a passion for the outdoors.

Davison often spoke of how he and Burger became friends in 2012 after Burger had plotted to end his life at Dignitas, the Swiss non-profit members’ society which offers assisted suicide to those who qualify. Burger had at first contacted Davison to offer support for Dignity SA which had been established by Davison in 2011 after his return to South Africa from New Zealand.

Burger, said Davison, had lost all control and autonomy over his body, and was confined to a wheelchair, often soiling himself. Burger began to plot to end his life but travelling to Switzerland, Burger realised, would present a logistical nightmare. He had subsequently requested Davison to “to be part of his plan” to end his life in South Africa. Davison said he had agreed as a friend to do so.

“He didn’t want people to know, he did not want to be stopped. He was determined to die. It was a very carefully thought out decision; he [Burger] had no hesitation,” Davison said.

However, while Burger’s mother had supported her son’s decision to end his life, other members of his family, including his fiancee, did not.

“We had a very relaxed, happy time. Because in many ways he was celebrating a death that was to come about. He was not nervous, not anxious. He spoke about beautiful things, about his love for his mother, for his fiancee. His concern was that he wanted them to understand the freedom he desperately needed.”

Davison has always maintained that Burger wrote the prescription for the drugs, had been accompanied by a carer when he went to collect the medication at the pharmacy and had consumed it himself.

“His eyes were so happy, I had never seen him happy. He was peaceful and relaxed,” said Davison, adding, “I was with him till the end. He clearly specified his wish to die and that there should be no criminal investigation.”

After Burger had exhaled his last breath, Davison had called the hotel reception to alert them so that cleaning staff would not have to deal with Burger’s body.

In 2014 Davison was elected to the board of the World Federation of Right to Die Societies in Chicago and described how Burger, at the time of his accident, had been a young man with his life ahead him.

“He was a brilliant medical doctor training in acute and emergency medicine, and he was strong and fit, with a passion for the outdoors.”

In a statement on Wednesday Dignity SA said it was awaiting more information about the charges against Davison.

“The law must take its course, as it should in a constitutional democracy,” said Professor Landman.

“Whereas we would do whatever possible to assist Prof Davison and his family in this difficult time, DignitySA wishes to reaffirm that our mission is a change in the legal position regarding assisted dying in South Africa. To this end we have been involved in the Stransham-Ford High Court case and the consequent appeal to the Supreme Court of Appeal, as well as a new High Court case that is pending, and the draft healthcare amendment bill to legalise advance directives.”

Davison, said Dignity SA, had a private and professional life outside of the organisation and, “like any good citizen, he takes responsibility for his choices”.

“We trust he will be given a fair hearing and, in particular, that the apparent conflict between our common law and the Bill of Rights in our Constitution will be argued in court. There is a class of people who, for no choice of their own, die in extremely distressful circumstances. Their rights have not been aligned with the Bill of Rights in the Constitution. For that reason, some individuals act compassionately in ways that might attract the attention of legal authorities.”

In 2015, Advocate Robert Stransham-Ford, 65, who had stage four cancer, applied to the North Gauteng High Court for an order to allow a doctor to administer a lethal agent to end his life. Stransham-Ford requested the court not to charge the doctor for this action.

Two hours before Justice Hans Fabricius granted the order, Stransham-Ford died. In his order the judge noted that the order should not be read as an endorsement of the proposals of the draft Bill on End of Life as contained in the Law Commission Report of November 1998 (Project 86). Fabricius had said that the Constitutional Court and Parliament should reconsider legalising assisted suicide.

Then Minister of Correctional Services, Michael Masutha, the NDPP and the Health Professions Council of South Africa appealed the ruling. In December 2016 the SCA ruled that it had been wrong for the high court to issue the order.

Speaking at the recent World Federation of Right to Die Societies’ 22nd biennial conference hosted in Cape Town, Advocate Tseliso Thipanyane, CEO of the SAHRC, said that the general “negative attitude shown by society towards suicide, assisted suicide and euthanasia whilst understandable from a religious and cultural point of view is difficult to understand and accept from a human rights perspective and the right to dignity in particular”.

He said that the right to dignity and the right of every individual to “security in and control over his or her body” were both entrenched in South Africa’s Bill of Rights which clearly provided “a basis for the acceptance of euthanasia, and at the very least, physician administered euthanasia”.

In the meantime Dignity SA has joined Dr Sue Walter, who has been diagnosed with terminal multiple myeloma, as well as Dieter Harck, who has terminal motor neurone disease, as a plaintiff in an action instituted in September 2017 to the Gauteng Division of the High Court.

“Dignity SA hopes to build on this judgment and support Dr Walter and Mr Harck in their brave action and so doing generate the legal precedent that should in turn result in the regulation and legalisaton of assisted dying.” DM