Coloured, colourism and privilege: Coloured is just an...

Coloured, colourism and privilege: Coloured is just an uncomfortable reality, a place on the margins 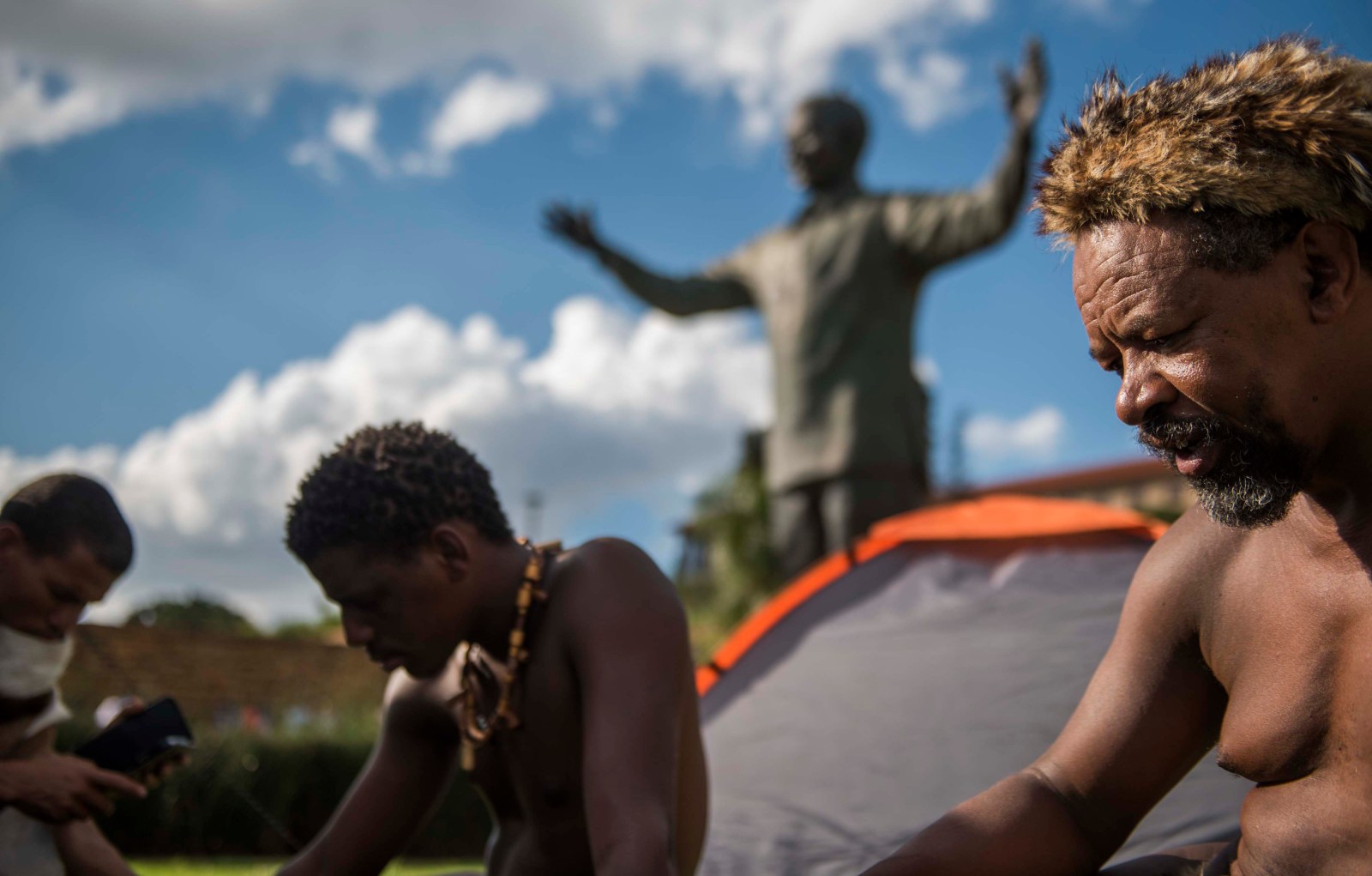 Khoisan community members Christian Martin (L) and Brendon Willings (R) camp outside the Union Buildings, Pretoria on December 12, 2017, after Chief Khoisan and Shane Plaatjies walked from Port Elizabeth to Pretoria to hand over a memorandum to the president. Photo by Gallo Images / Alet Pretorius

This is Part 2 of a three-part series on Khoi-San identity, published during Heritage Month.

As a child, I absolutely dreaded bath time. It may seem a trivial fact, but my disposition to daily grooming extended far beyond mere disappointment about an abrupt end to playtime…

Bath time, for me, meant my grandmother shouting for one of my four older cousins to fetch the orange net bag and ammonia floor cleaner from under the sink, so that she could scrub the black off my neck.

The mixing of enslaved populations in the Cape transferred traits from many other ethnic groups to Khoi-San people – traits such as skin pigmentation from the Indians; a trait that I am prone to. It’s genetic – but my grandmother would scrub the colour off my skin with chemical-based household cleaner like dirt. And although physically painful, what hurt most was the sound of my cousins sniggering at the ridiculousness of the situation from the other side of the door.

I carried this trauma with me for most of my adolescence. I bought into my grandmother’s association of pigmentation to dirt, and even adopted her torture in order to prevent any further embarrassment. I tried everything from toothpaste to complexion creams – and even ventured into other household cleaners like green Sunlight soap.

My grandmother’s mission to keep the fairest of her children’s complexion as white as a porcelain doll is a type of madness that seems absolutely irrational and inhumane on the surface; but, it was rooted in a longstanding heritage of assimilation to whiteness as a ticket to privilege in the coloured community.

In her memoir, The Keeper of Kumm, Sylvia Vollenhoven recalls her formative years in which being classified “mixed” afforded her family the ability to live “next to the school for the fair kids of the coloured middle-classes” but not the esteem of those she calls “less mixed”.

She writes that being called the K-word was at the top of the list of insults for dark-skinned coloured kids.

“It is right up there alongside Boesman or Hotnot. Name-calling I rail against all through my childhood,” she writes.

The anti-apartheid journalist goes in great depth about her own identity politics and experiences of colourism. She describes how she would secretly use her mother’s skin lightening creams and straighten her hair just to fit in, to be respected.

But, not even a lifetime of skin-based discrimination could prepare her for the ultimate reminder of the “blackness from which (she had) been running”; the day she received her green government identity card:

“Coloured is just an uncomfortable reality, a place on the margins,” she writes. “Other coloured is the no man’s land on the edge of the tenuous border.”

In his comparative study of the South Africa coloured community and the creole population of Louisiana, United States, Dr Blair Proctor note a natural resentment which occurs in multi-ethnic oppressed groups, where particular groups benefited because of skin colour.

“Specifically, color (sic) determined economic, educational, and political privileges and opportunities for advancement,” he writes. “For example, pencil tests and paper bag tests and other forms of tactics were used to determine who was an insider or outsider.”

This promise of privilege has had a profound effect, not just on the psyche of coloured people, but society at large.

While aspirations of whiteness in the community have developed into a culture of body manipulation – evident in the widespread practice of hair straightening – privilege is still safeguarded for those more closely assimilated to whiteness.

International studies show that among people of African descent, there is a clear bias toward those of a lighter complexion, as far as job recruitment is concerned. A Villanova University study found that interviewers deemed lighter-skinned black people more intelligent than darker-skinned people who had identical credentials.

Closer to home, a recent study found that people who talked with a twang were deemed more trustworthy. The University of Cape Town researchers who conducted the study speculated that those who boosted a “model C” accent were perceived as having a higher social status.

What this means for coloured South Africans, even in the era of reformative policies such as broad-based black economic empowerment, is the perpetuation of an apartheid social hierarchy – which is clearly evident in the amplified disparities between these communities formed on proximity to whiteness.

Indeed, my grandmother may have suffered a certain type of psychosis when trying to scrub the black off my skin; however, this type of crazy is not limited to her, her posterities or the broader coloured community, for that matter. It is a mental conditioning that cuts across the social divide.

As Frantz Fanon noted in his 1952 critic of the African diaspora in the United States:

“The colonized (sic) is elevated above his jungle status in proportion to his adoption of the mother country’s cultural standards.” DM