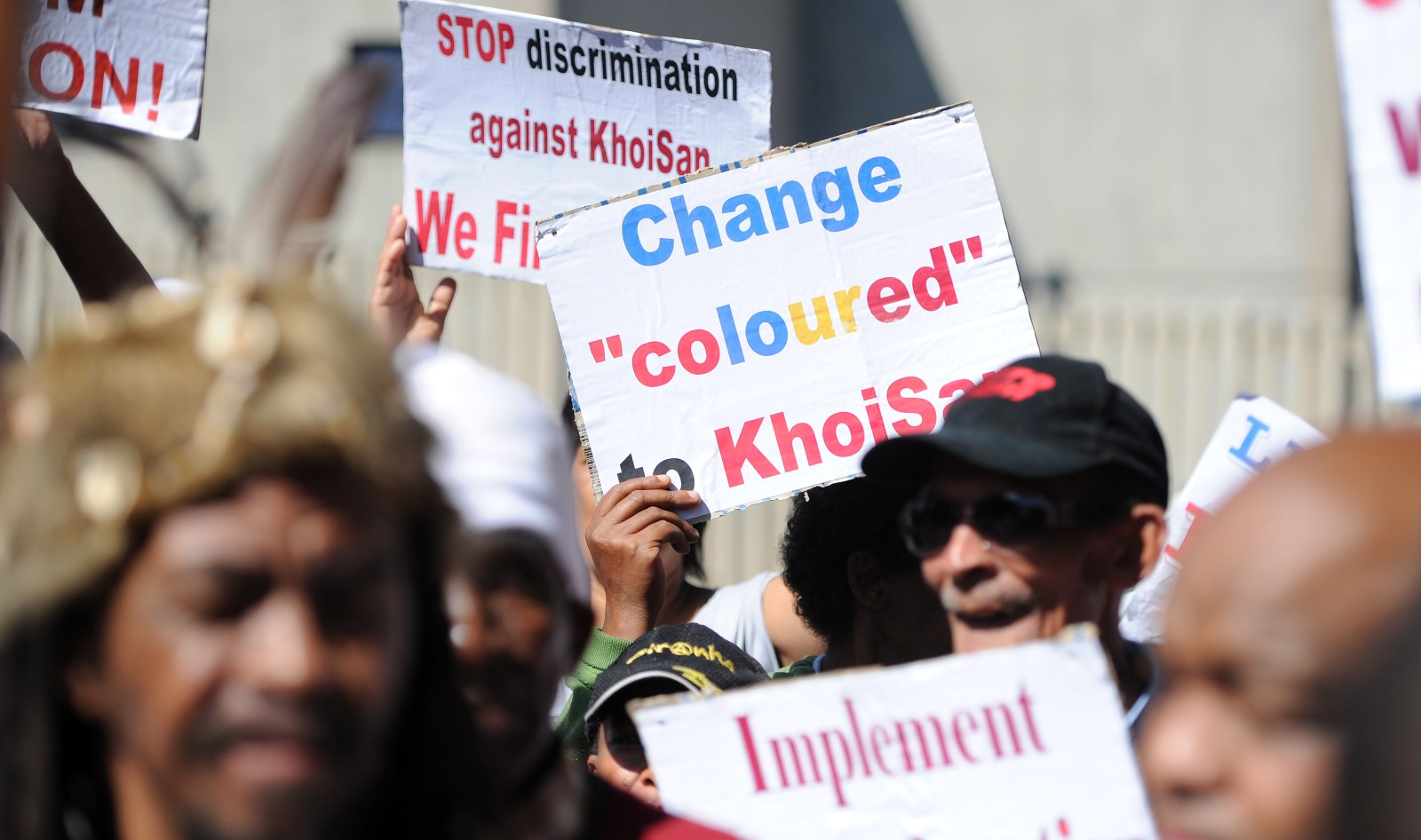 This is part 1 of a three-part series on Khoi-San identity, published during Heritage Month.

“History is a people’s memory, and without a memory, man is demoted to the lower animals. When you have no knowledge of your history, you’re just another animal.”

A recent Human Rights Commission (HRC) report noted the importance of officially recognising the cultural identity of Khoi and San peoples on an equal standing to other cultural groups as “inextricably” linked to human dignity.

It identified the continued forced apartheid classification of Khoi-San peoples as “coloured” as an infringement on their right to identity and culture, a precursor to “their virtual political and social invisibility”.

The commission, as mandated by the SAHRC Act, recommended that the South Africa government, through the Presidency and Department of Arts and Culture, begin taking steps toward the removal of this forced categorisation by 31 March 2019.

These findings add a new dimension to public discourse around the authenticity of those categorised as coloured and their African identity. Its contribution to what has been deemed “the coloured debate” is simple: the Khoi-San cannot rebuild identity and social structures in the absence of recognition.

Continued exclusion only stands to push them further into the margins of society as inadequate measures to promote, protect and preserve their culture, traditions and traditional knowledge systems will lead to the complete erasure of their heritage: their memory.

As it stands, our constitution only recognises the Khoi-San under language provisions in Section 6. Any reference to “indigenous” in other provisions is interpreted and understood to mean all African communities.

Associate Professor at the Centre for Humanities Research at the University of Western Cape, Suren Pillay, credits this disqualification of indigenous status to race categorisation.

“Across the continent there were often categories of populations who did not fit neatly into (the) division of white settler and black native,” he writes.

“They were often categories of populations defined as ethnic, but like the Europeans, they were classified as races under colonial law. Like Europeans, colonial thinking said they came from elsewhere, and were also therefore not indigenous.”

This has manifested in an unfairly stringent process in order for Khoi-San to prove their identity. While other African tribes are granted recognition based on language, surname or customary practices, the recently passed Traditional and Khoi-San Leadership Bill prescribes strict criteria for a community to be recognised as Khoi-San.

The bill affirms that to gain recognisation as such, a community must have a history of self-identification and must be separate from all other communities; they must observe distinctive established Khoi-San customary laws and customs; and must have a track record of existence within a specific geographical area.

On top of this, Khoi-San leaders are required to submit membership lists to government on an annual basis – comprising full names and surnames of members, with certified copies of the identity documents.

Time and again, Khoi-San leadership, particularly in the Northern and Western Cape, has lodged its grievances about this type of unfair treatment.

In the most recent attempt to capture the attention of government and the South African public at large, Khoi-San King Calvin Cornelius III served notice to Parliament to vacate its Cape Town premises.

The eviction notice given to Cabinet, and addressed to the president, read:

“This is to officially inform you of the decision of the King and the Khoi-San people to secede from South Africa. You were given notice of our secession as well as our declaration based on the principle of self-determination and independence to establish the Sovereign State of Good Hope.”

It set an impossible five-day notice period, accompanied by a 48-hour registration allowance for non-Khoi-San “aliens” to legally reside in the independent Khoi-San state; it pretty much mirrors the hoops Khoi-San peoples are expected to jump through to validate their existence.

The forced classification of Khoi-San as coloured stunts society’s ability to imagine them as anything but. It legally permits the denial and erasure of their existence, unique history and memory. Thus, not only does it strip them of their identity, but their humanity too. DM